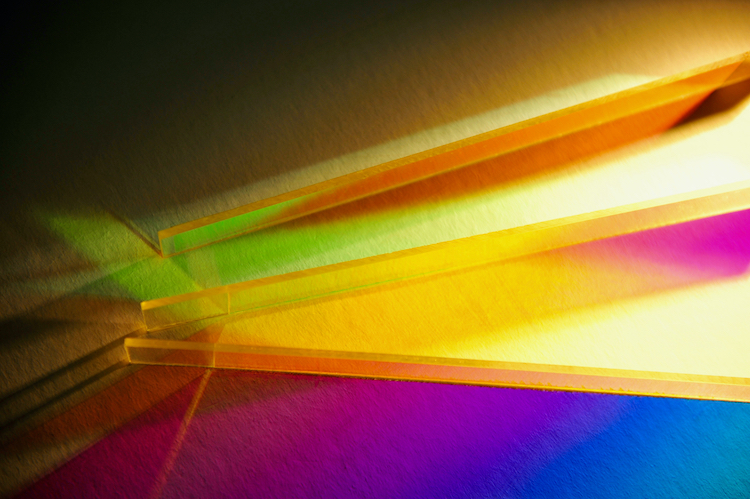 Photo: Stock Photos from SuperPuay/Shutterstock
This post may contain affiliate links. If you make a purchase, My Modern Met may earn an affiliate commission. Please read our disclosure for more info.

Rainbows are pretty magical, and although we’re drawn to them, the natural phenomena is totally intangible. Rainbows are an optical illusion that are only visible depending on how light and water react in the sky. But what if we could recreate similar spectrums of light using man-made materials?

Dichroic light filters can filter light from a white light source to produce light that looks as though it’s highly saturated in color. When used on glass, artists are able to create beautiful objects with vibrant, dazzling effects.

What is Dichroic Glass?

Dichroic glass is a material that displays two different colors that change depending on the lighting conditions. The high tech “chameleon glass” was developed by NASA to help protect astronauts’ vision from the harsh glare of unfiltered sunlight in space. It's made by adding thin layers of metal film to the glass surface. The coated glass acts as a shield from the harmful effects of cosmic radiation.

The invention of dichroic glass didn't just solve a problem in space, it also opened up a whole new world of creative opportunity for glass artists. The process of coating glass in metal film allows light and color to reflect and generate all kinds of mesmerizing patterns. 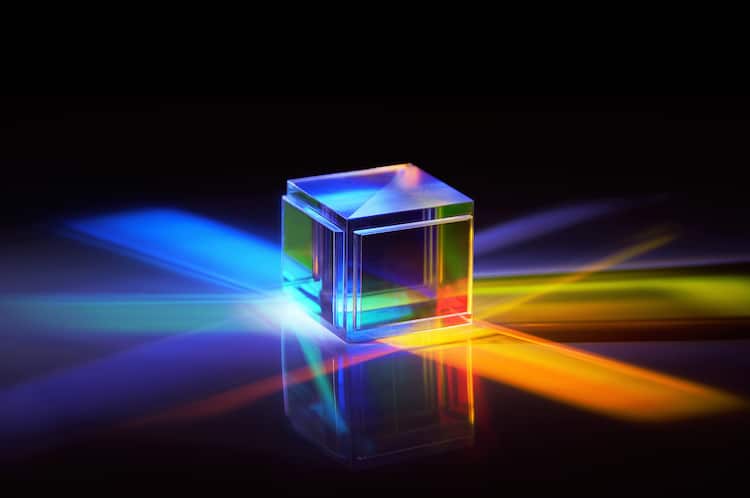 One of the pioneers of using dichroic glass as an art form is former aerospace engineer Murry Schwartz. In the 1960s, he worked for Wallin Optical Systems, a NASA contractor, to provide projects designed around optical relay. In 1971, Schwartz left the aerospace industry and began making dichroic stained-glass windows, mobiles, and other artworks. “I was very much interested in thin film physics,” he admitted. “I also had a keen attraction to dichroic glass which, in the purity of its narrow bands of color, is overwhelmingly beautiful.” He continued, “When coupled with the feature of colors that change, the material is quite fascinating, almost magical, and certainly appealing. So I decided to make a little business out of it.”

Today, the thin film for dichroic glass is commercially produced, and many artists use it to create incredible color-changing works that beautifully interact with light. Read on to discover five contemporary dichroic glass artists.

Ray Howlett was another early pioneer of dichroic glass art. The sculptor discovered the material during the late ‘70s and hasn’t looked back since. “The most vital aspect of my artistic growth came with my discovery of California aerospace industries that produced ‘dichroic light filters,’” he reveals. “These highly reflective thin-film coatings make color shift with different angles of view.”

Howlett began experimenting with mirror and transparent reflective coatings on glass to create crystal-like sculptural forms. He often incorporated electric lights into his pieces to increase the multi-dimensional effects. Howlett claims that his works “optically expanding space.” As the viewer moves around one of his sculptures, the internal shapes and colors shift, appearing to float within translucent forms. One of the highlights of Howlett’s career came in 1991 when one of his sculptures was featured in Star Trek The Next Generation, Unification II. 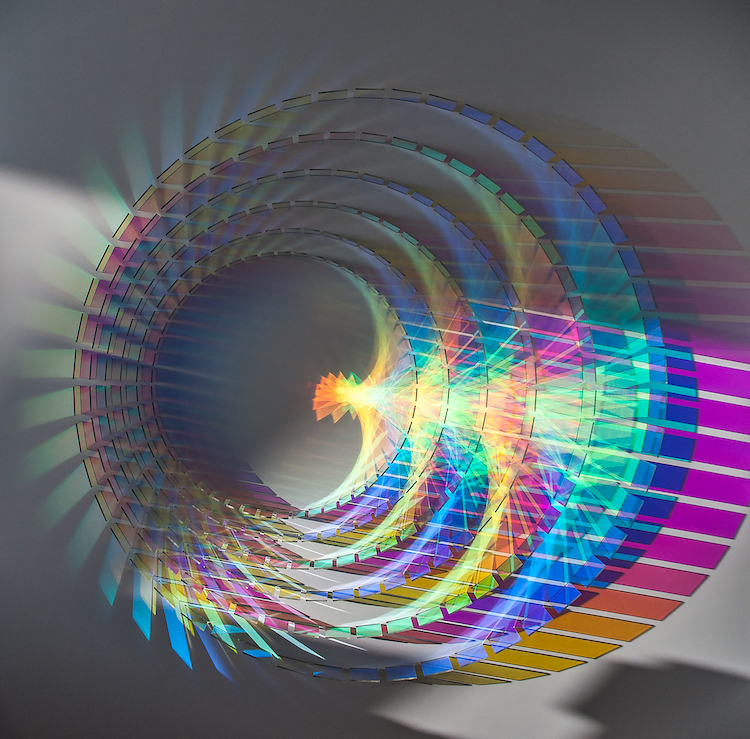 Chris Wood crafts mesmerizing installations that offer “ephemeral glimpsed moments in the natural world.” Using light as her medium, she designs sculptures and other arrangements that create patterns in response to the environments in which they are placed. The appearance of each multi-colored work of art depends on how the light hits it. “The material itself is transparent,” she explains, “however it shifts from being reflective like a golden mirror to vibrantly colored or almost transparent depending upon the viewpoint and angle of light.”

Want to see more of Wood's work? Discover how she turned sunlight into dazzling neon displays in Taipei's National Convention and Exhibition Center. 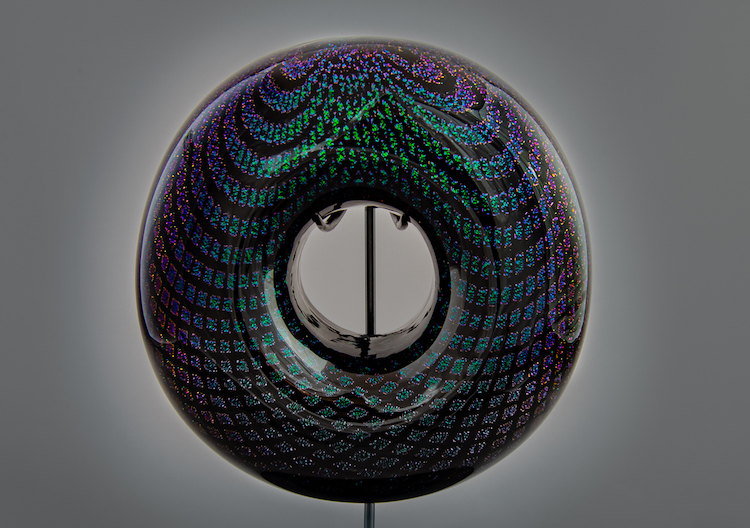 Andrew Lang calls dichroic glass his “obsession.” He didn’t start making glass objects until he retired in his mid-sixties. However, today, he’s mastered the craft. Lang creates hand-blown globes, disks, and other forms that incorporate ultra-thin layers of quartz crystals and metal oxides fused on glass. The dazzling sculptures look like they hold entire galaxies below their shiny, transparent surfaces. Lang says, “Hopefully [my] hand-blown dichroic glass objects will take the viewer away from our chaotic and anxiety ridden world and transport them to a place of peace and pleasure.”

See more from Lang's ever-growing portfolio on his website.

Behind the vibrant colors and striking compositions, Stephen Knapp’s “Lightpaintings” explore space and dimension. He uses dichroic glass to form 3D compositions that refract and reflect light onto a surface and the surrounding space. While walking through his transformed gallery spaces, viewers are immersed in “iridescent radiance.”

“I have been fascinated with light all my life, both for what it can do and for the effect it has on us,” reveals Knapp. “In all my prior mediums I've used light in ways that are not always apparent. When I found a way to uniquely express myself in light, I embraced it fully. With my lightpaintings, I separate white light into pure color and ‘paint' with light. Each piece has a presence that far exceeds its physical dimensions. At once both physical objects and illusions, they remind us that dreams, hopes and aspirations are the center of art's ability to touch the human spirit.”

Find more from Knapp's colorful portfolio on his website.

British artist Amber Stefani creates colorful outdoor installations and lamps. Her handmade “sensory art” transforms environments into magical, light-filled spaces. Stefani’s larger installation pieces invite viewers to come closer to the piece in order to enjoy a warm sensory experience. “Once you step inside, you become mesmerized in a kaleidoscope effect of vibrant colors and patterns, reflecting and refracting off one another, switching through a metallic and iridescent rainbow color wave as you move around inside,” says Stefani. “The sculpture is a solid structure which can be placed in any environment and will withstand all weather conditions.”

See more from Stefani's portfolio on Etsy, where you can buy her beautiful handmade lamps.

8 Contemporary Glass Artists That Shatter the Boundaries of the Craft