By Madeleine Muzdakis on February 5, 2021 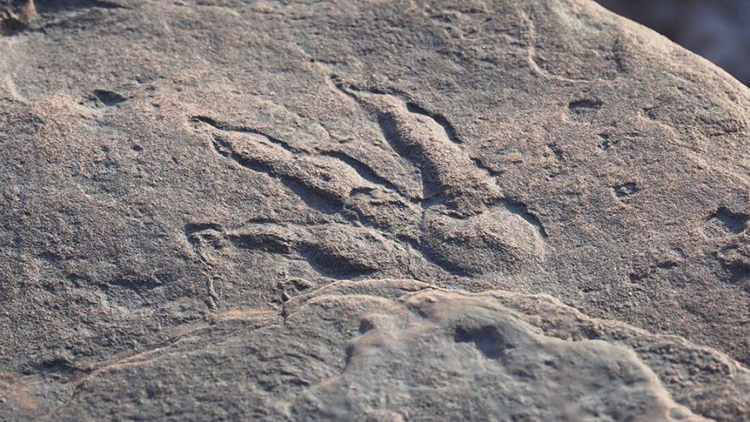 Children have unique perspectives and a passion for exploring their world, but who would have guessed that a kid would discover an incredible artifact? As it turns out, a 4-year-old girl in south Wales named Lily Wilder, on a routine walk on the beach with her dad, noticed something imprinted in a rock. What the young girl discovered was a 220-million-year-old fossilized footprint of an early dinosaur. The beach on Bendricks Bay in the Vale of Glamorgan is known for fossilized evidence of ancient life, but Lily's January discovery has turned out to be the most important and scientifically valuable imprint discovered in the region.

The footprint was ideally situated to be noticed by a child. Lily's mom Sally Wilder told NBC, “It was on a low rock, shoulder height for Lily, and she just spotted it and said, ‘Look Daddy.'” The two took some pictures of the print and returned home, where family suggested they show the images to the paleontology curator Cindy Howells from Amgueddfa Cymru, the National Museum of Wales. According to Howells in a museum statement, “This fossilized dinosaur footprint from 220 million years ago is one of the best-preserved examples from anywhere in the UK and will really aid paleontologists to get a better idea about how these early dinosaurs walked. Its acquisition by the museum is mainly thanks to Lily and her family who first spotted it.”

Along the rocky coastline of The Bendricks, there are many fossilized footprints, mostly of reptile-like prehistoric creatures. By contrast, the footprint found by Lily and her family is known as a grallator—a small three-toed print made by a theropod dinosaur (e.g. a Coelophysis). The National Museum of Wales requested special permission to remove the print for its own protection from the protected beach area. The request was granted, and the print will be preserved and studied by future generations. Young paleontologist Lily will also be credited as the official finder of the print. Her mom shares, “She is really excited but doesn't quite grasp how amazing it is.” Lily herself added that the T-Rex is her favorite dinosaur.