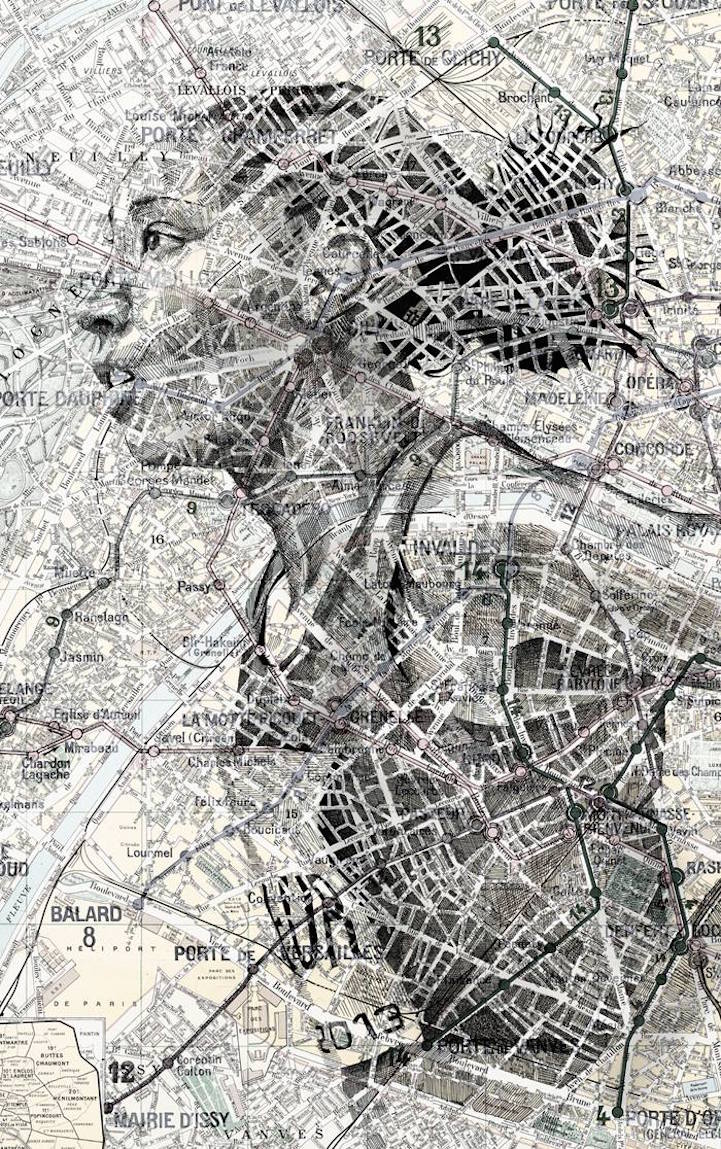 In an intriguing blend of cartography and illustration, UK artist Ed Fairburn uses maps as his canvases for stunning ink and pencil portraits. Faces are fragmented by contours that not only delineate borders, roads, and geographical features, but also bear a striking resemblance to veins and the texture of skin. Made up of incredibly intricate details, the human forms that emerge from dense lines are extraordinarily realistic, even while being abstracted by the patterns of the maps.

When asked why he uses maps as his medium of choice, Fairburn replied on his Facebook page: “Several reasons… the ephemeral quality, the traditional element away from digital, the richness of pattern… maps offer a kind of framework which fits my work both physically and conceptually.”

Scroll down to see more of Fairburn's recent work, shown here with captions courtesy of the artist.

A portrait of French athlete Eloyse Lesueur, drawn in ink on an original street plan of Paris, 40″ x 20″ approx. 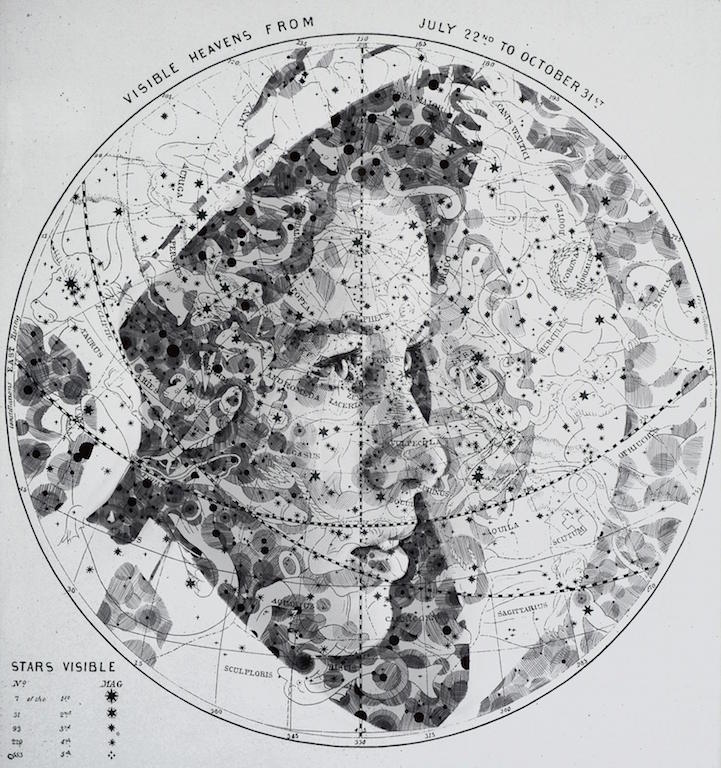 Anna Fisher is an American astronaut, who in 1984 became the first mother to travel into space. I constructed her portrait by layering hundreds of concentric circles, drawn in ink, over a celestial star chart. The idea was to show both Fisher and the original chart underneath (I preserved most of the constellations). I also reinforced some of the tones in pencil.

I've always been fascinated by the cosmos and anything space-related. I spend clear nights photographing our solar system and the stars beyond, using a reflector telescope, equatorial mount, and DSLR camera. The distances involved are unimaginably vast. So vast, in fact, that each photograph I take shows a snapshot thousands, if not millions of years ago…the light itself takes a considerable length of time to reach the camera shutter. To put it simply, the deep night sky is a patchwork in time…each star represents the universe as it once was. 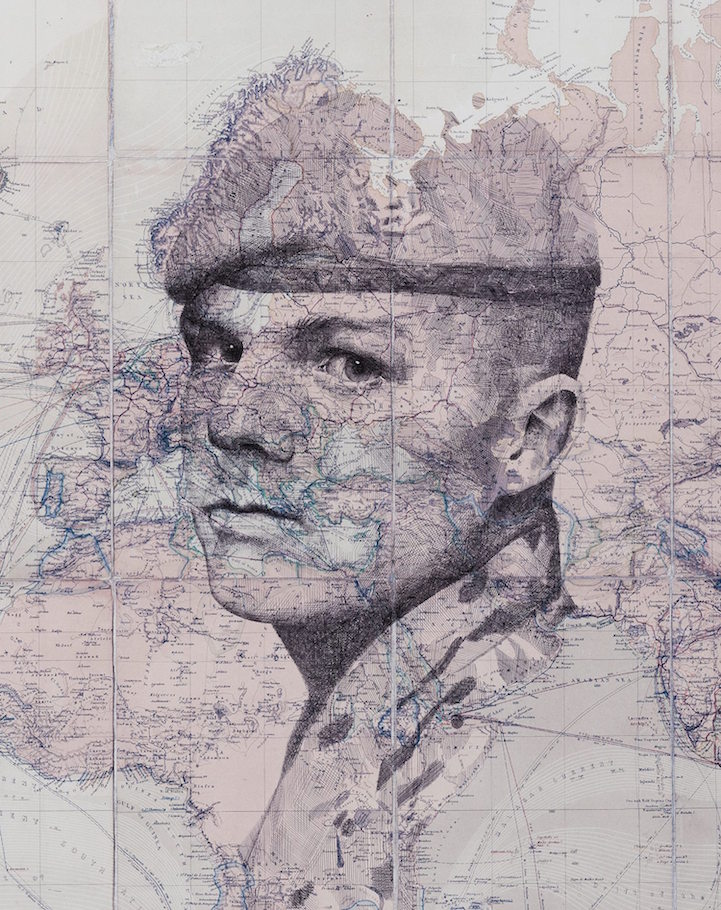 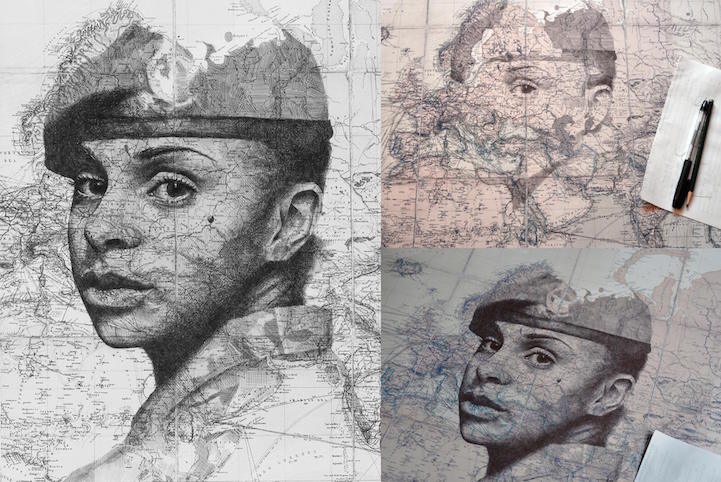 Both portraits (male and female) were originally drawn/crosshatched in ink (ballpoint pen) on two different copies of a world map. They were then enlarged and reprinted onto wooden panels for army recruitment offices around the UK. 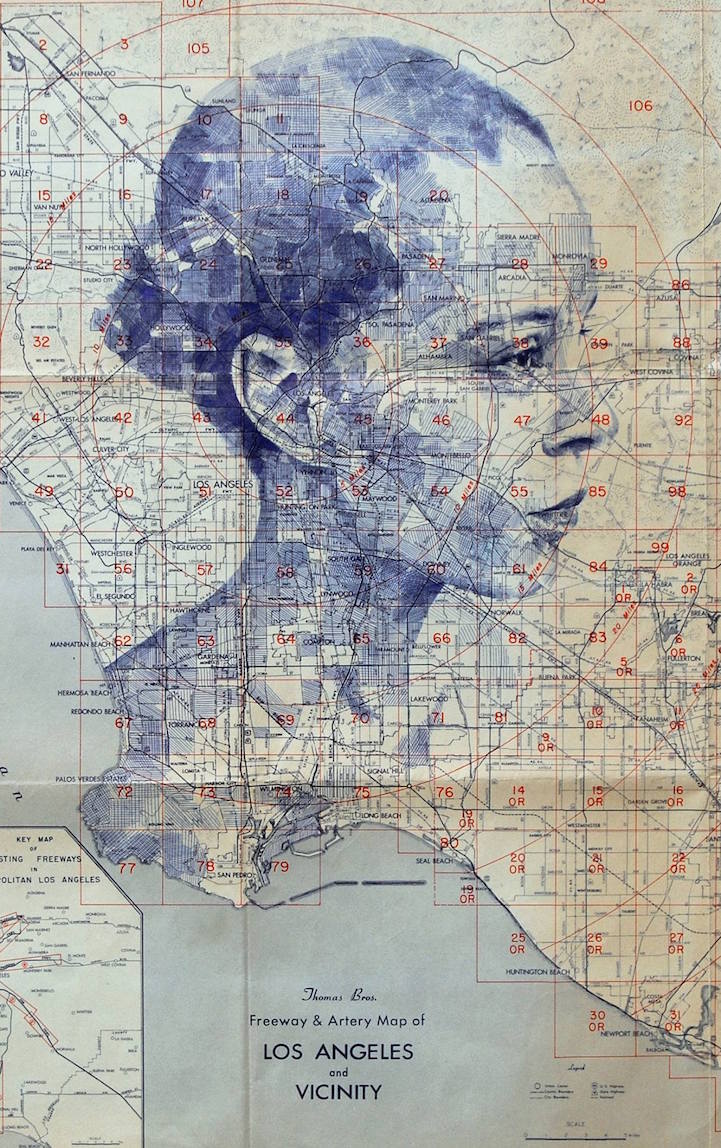 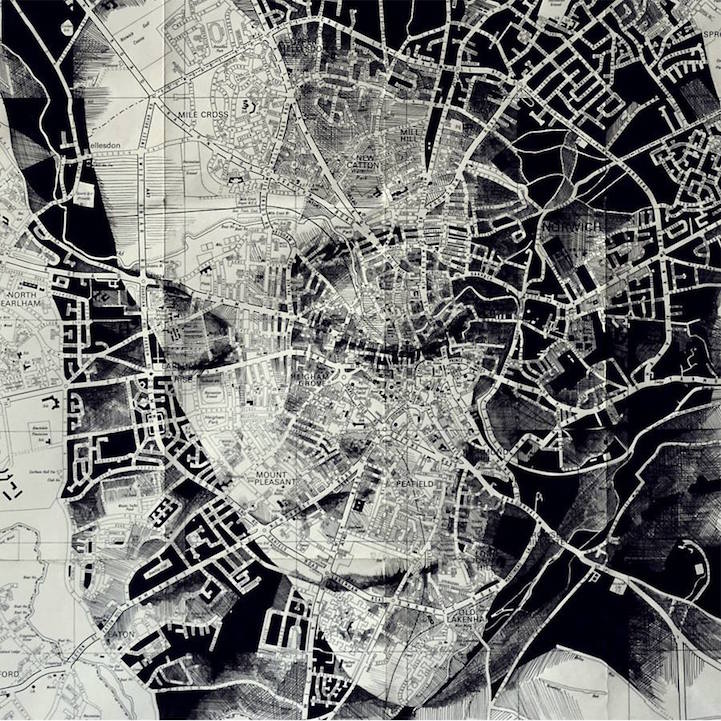 Ink on a street plan of Norwich, 14″ x 14″ approx. Only the spaces between roads have been worked into, preserving the original map–this shows both the map underneath and the portrait within the same image. I grew up in the Norwich area, so this was particularly enjoyable to draw. 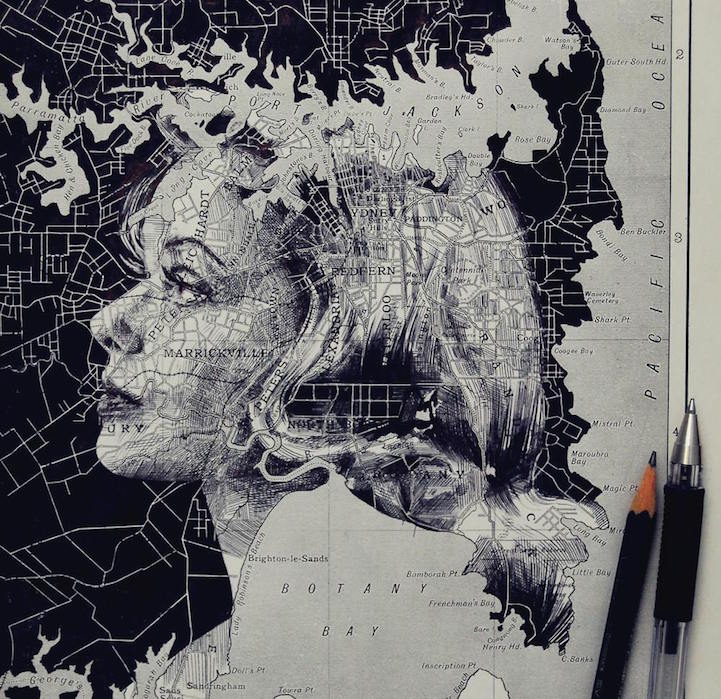 A miniature ink portrait drawn into an old harbour map of Sydney. 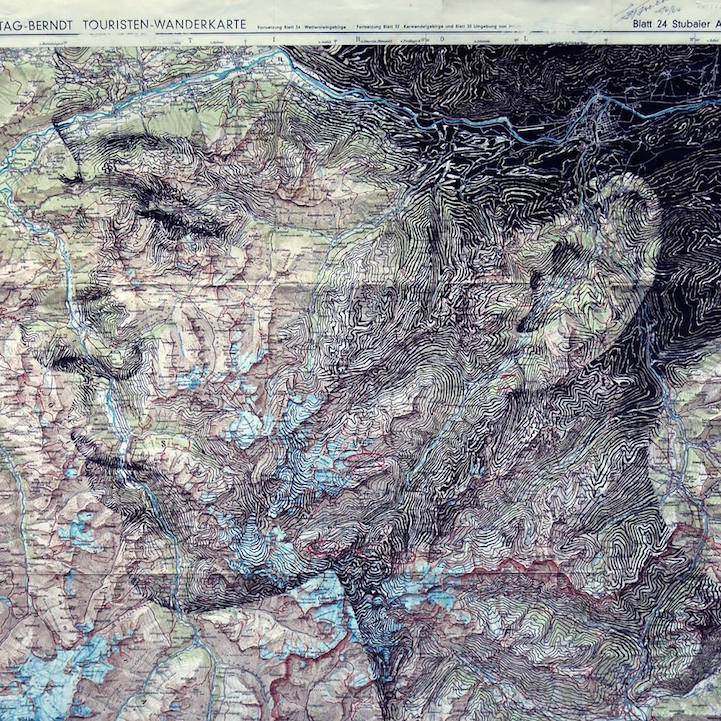 Ink on a contoured map of Innsbruck/surrounding area, 52 x 52 cm approx. Lines of elevation have been followed with a pen–the width of each line is altered accordingly to build the different tones. 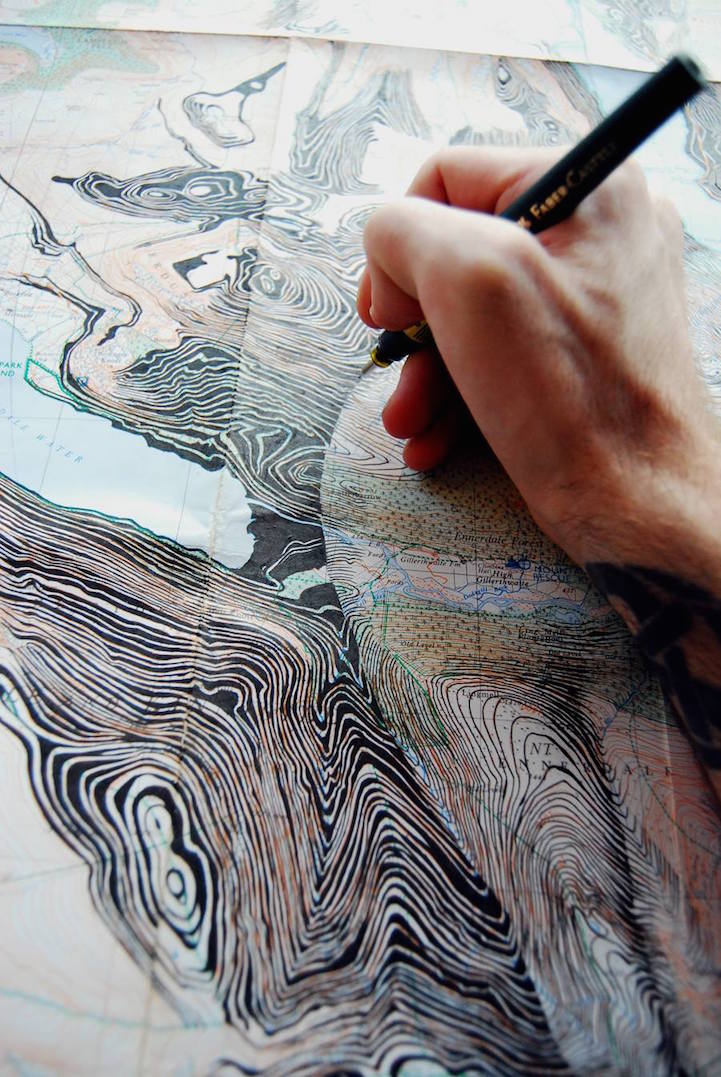 Working shot of Keswick–similar to Innsbruck, the weighting of each contour is altered to suggest tones and details. 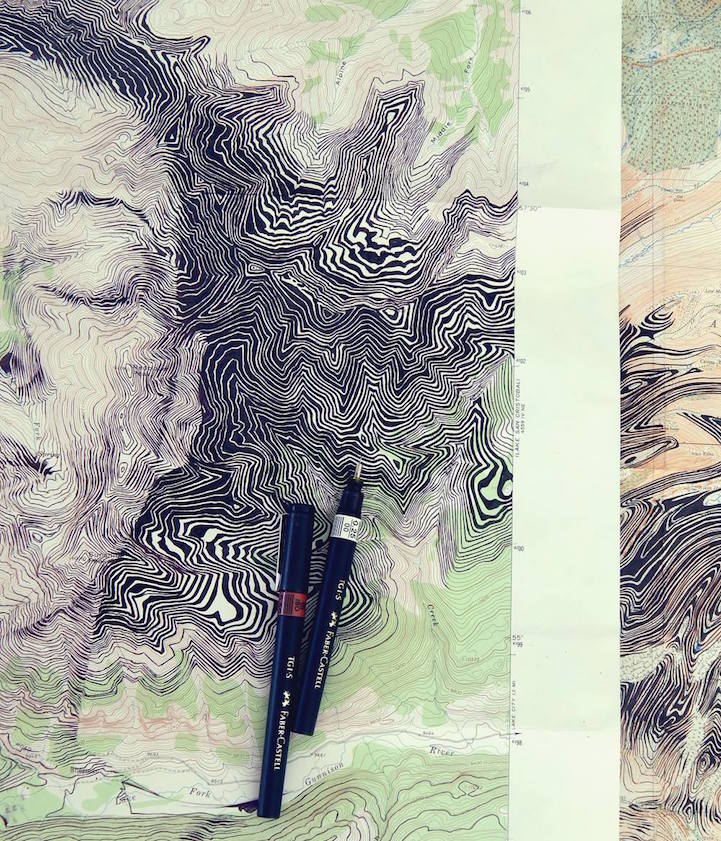 A preview shot of a contoured map, whereby each line of elevation is thickened in ink to build areas of tone–this technique shows the human figure whilst preserving the landscape underneath. 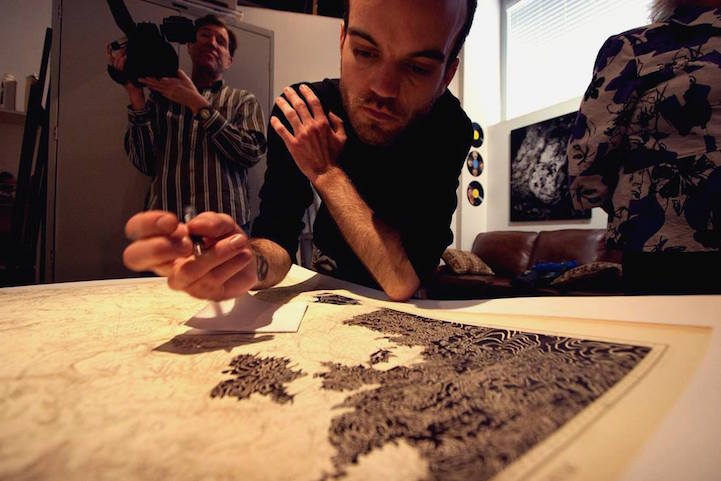 The artist at work.

My Modern Met granted permission to use images by Ed Fairburn.