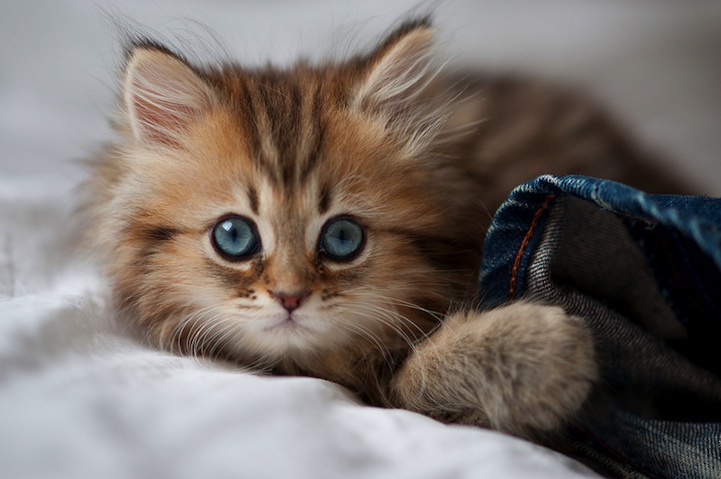 Remember Daisy? Silly question, right? How could you forget her! It was just yesterday that we introduced you to, who we named, the cutest little kitten in the world. If you were like us, you weren't satisfied with just those pictures, you were left wanting to learn more. Where was Daisy found and what's her personality really like? Also, what are some ways we can all take adorable pet photos like this? Lucky for us, we got a hold of owner Ben Torode to ask him these questions and more. Read that exclusive interview, below. 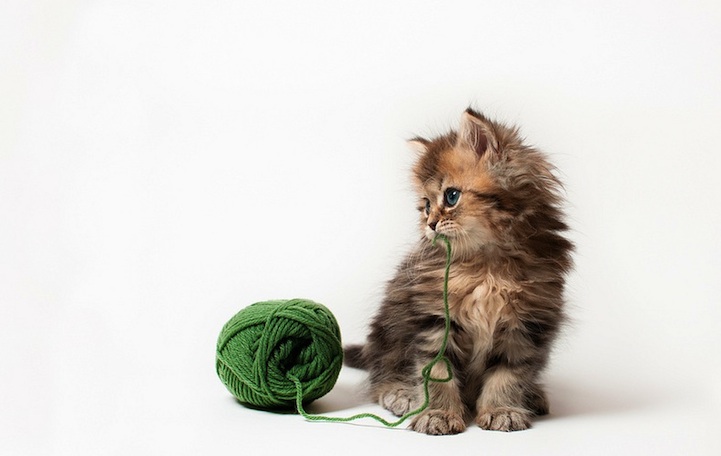 Where did you find Daisy?
We found Daisy at a pet store in Tokyo. We didn't know what kind of cat we wanted but when we first saw Daisy it was love at first sight. We actually just went in to the store “for a look” but came out with Daisy. We named her Daisy as it was my nickname for my wife when I first met her.

How old is she in these photos and how old is she now?
Most of the photos of her are from when she was between eight and sixteen weeks old. She's six months old now. 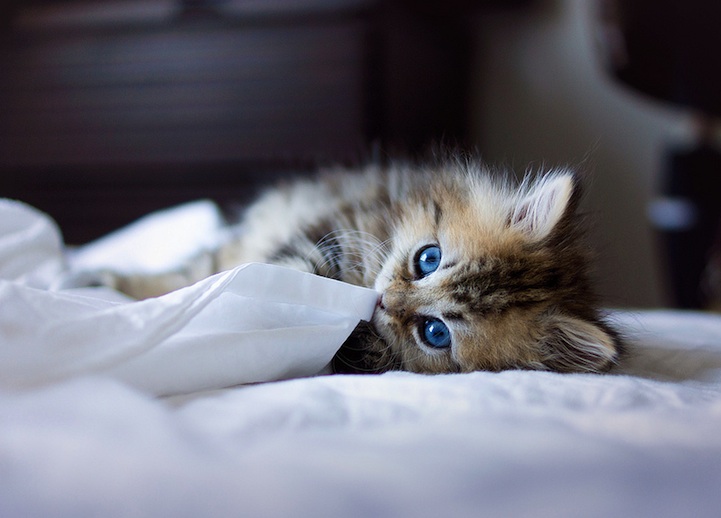 Can you tell us more about Daisy's personality?
Daisy doesn't like to be held or even petted that much, but she HATES to be alone. Her happiest time (apart from eating) is joining us on the bed. She just likes to be near us and that's when she'll purr like crazy. She also has a great hunter instinct. She'll stalk, hunt and pounce at her mortal enemy, the mysterious laser pointer, until she's tired. 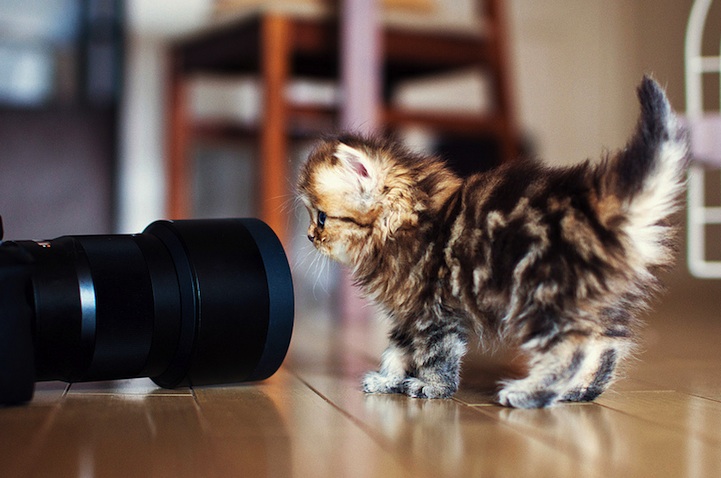 What have you learned about shooting kittens in the process?
More than anything I have learned that it's nearly impossible to make a kitten do something and have it understand what it's doing in the process, so you cannot present human motivations and expect the cat to act accordingly. In other words, you need to play to the kitten's own instincts to provide the motivation for it to go somewhere or act in a certain way that feels natural to the cat. As soon as a cat decides it doesn't like something, you are going to lose the shot. 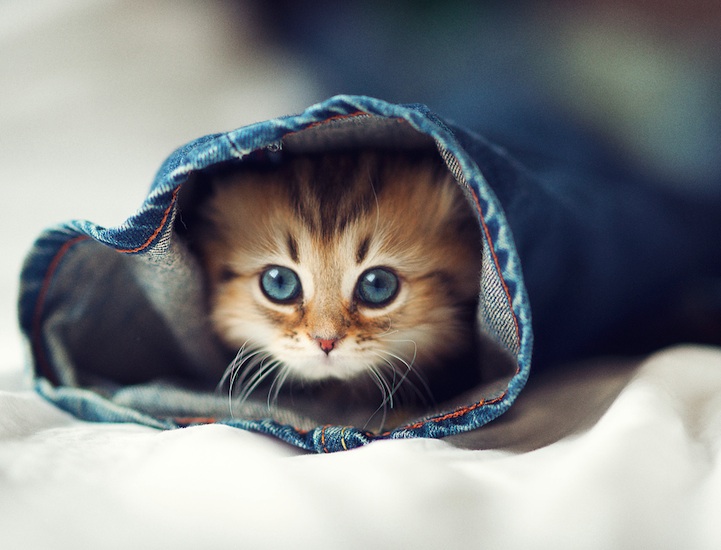 Take the shot of Daisy coming out of a pair of jeans. The first time she went through them (I guided her in) was when I caught that shot. Afterwards I tried to get her to do it again but she decided she didn't like it and ran full pelt through them making it impossible to capture her. So you need to be ready for the cat to show curiosity and pause that very first time but not thereafter. They won't repeat tricks on demand.

The second technique I've developed is what I call a pre-focused “killing zone.” I like to use very large aperture lenses like the 135 f/1.8 or 85 f/1.4. These produce great images when the focus is spot on but there is only a narrow zone in which the kitten's eyes are in focus. So I manual focus a specific zone, use a remote control shutter release in one hand and play with the cat until they enter the “zone.” So in many shots I'm not behind the lens but actually interacting with the cat, which is how I can get them into cute poses by myself.

An example is this… 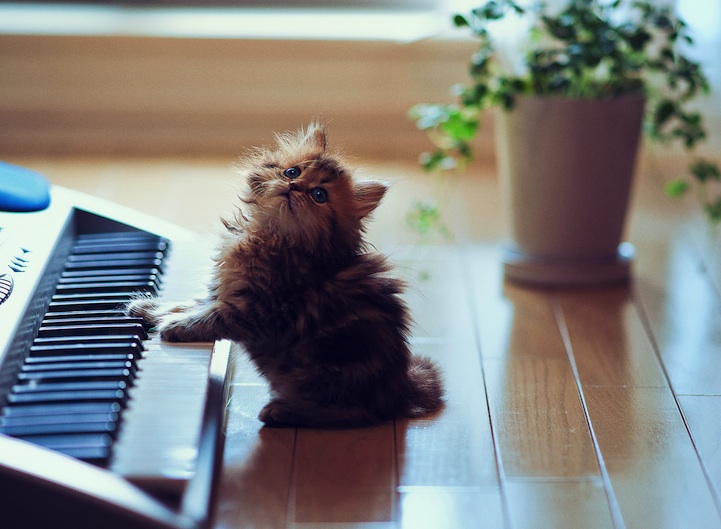 Whereas this behind-the-scenes shot shows the toy I used to get her into position. 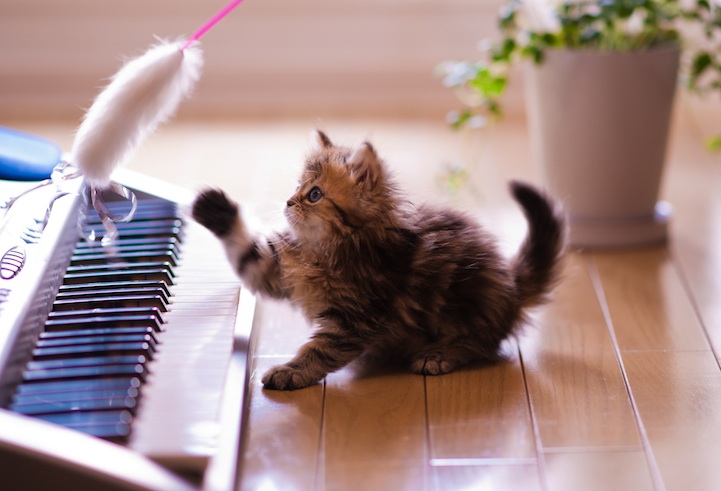 Is it true that you're a translator and not a professional photographer?
Yes, I translate from Japanese to English for a living. Fortunately I work from home, which gives me ample time to play with and photograph my two cats. That said, I do have a large selection of photographs, including most of my kitten photos, for sales for commercial use through Getty Images here. 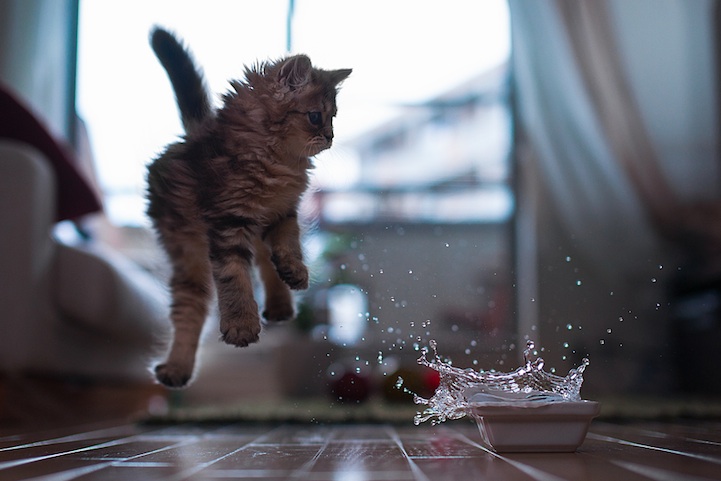 Lastly, a tripod helps to make composite shots so you don't need to put the kitten through anything traumatic. In this shot, for example, the water splash and “jumping” cat were shot separately but with the same lighting settings so they could be combined separately. And in fact, Daisy is landing, not jumping here. 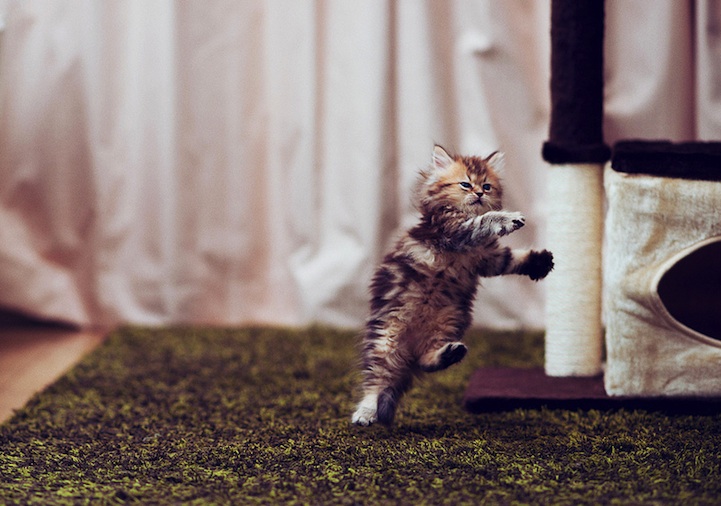 What do you hope others take away from your photos?
To be honest, it's mostly the “awwww” factor. That's when I know I've succeeded with a shot. I also like getting people's interpretations of certain shots as they will often ascribe human emotions or actions to them. For instance, many people thought Daisy was making a rugby pass in this shot.

Thanks so much for the interview, Ben! Can't get enough of sweet, little Daisy.