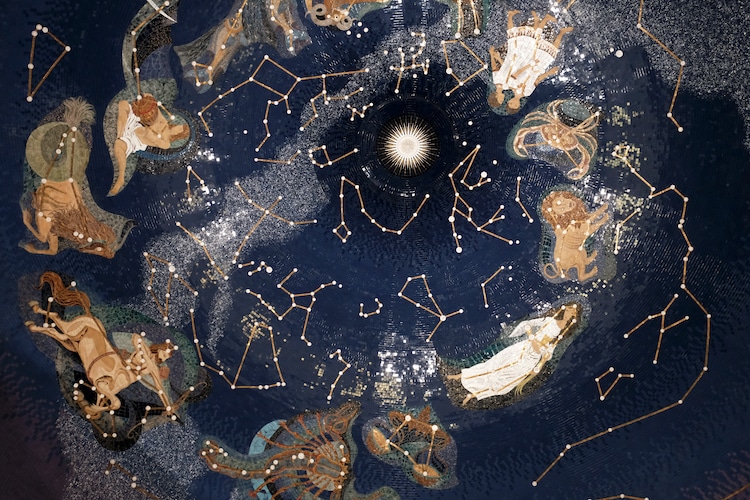 Have you ever looked up to the night sky and wondered how to identify famous star patterns? You may have heard of the “Big Dipper” or know the signs of the zodiac, but finding famous constellations among the stars requires knowledge of their fascinating history.

Ever since humans walked the Earth, great significance has been given to the celestial objects in the sky. Throughout history, names and mythical stories have been attributed to the star patterns, giving birth to what is now known as constellations. The International Astronomical Union lists 88 constellations—48 of which were recorded by Greek astronomer Claudius Ptolemy during the 2nd century.

For the Greeks, stars were a way of preserving folklore and mythology. The images depicted in their constellations are of heroes and beasts who received a place among the stars as tribute for their deeds on Earth.

Read on to discover the stories of some of the most famous constellations, as well as some tips for identifying them in the night sky.

Here are 10 famous constellations you should know. 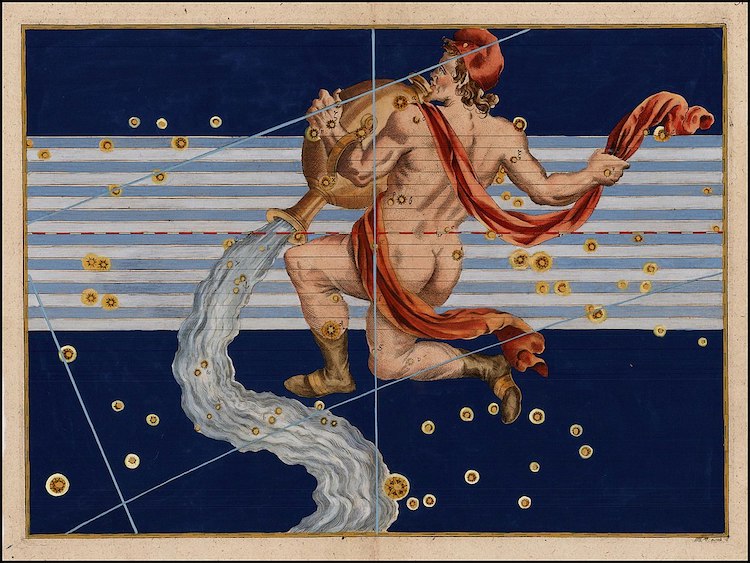 Aquarius is one of the 12 constellations of the zodiac and situated between Capricornus and Pisces. Aquarius was first recorded in the second century by the Greek astronomer Ptolemy, making it one of the oldest documented constellations. It’s also one of the biggest, spreading out over 980 square degrees. Despite its size, it can be difficult to see with the naked eye as there are no particularly bright stars that stand out. Aquarius is located near other water-related constellations—Cetus (the whale), Pisces (the fish), Delphinus (the dolphin), and Eridanus (the river)—in what is often referred to as the water or sea section of the sky.

The name Aquarius means “cupbearer” or “water bearer” in Latin. In Greek mythology, the constellation represents Ganymede, a handsome young man who was the object of Zeus’ affection. According to lore, he was brought to Mount Olympus where he served as cupbearer to the gods and was granted eternal youth. 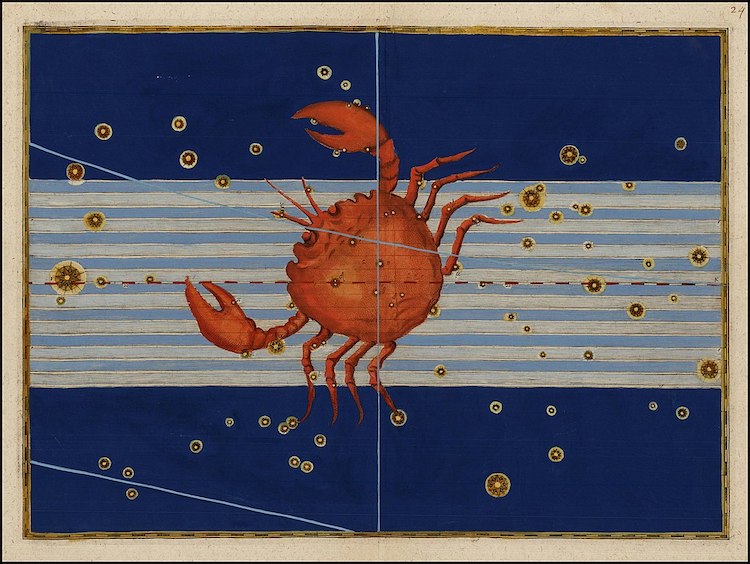 Cancer, meaning “crab” in Latin, is the fourth sign of the zodiac. It’s one of the dimmest constellations, featuring only two stars above the 4th magnitude (measurement of brightness). The Cancer constellation occupies an area of 506 square degrees and lies between Leo and Gemini.

In Greek mythology, Cancer represents the giant crab that attacked Hercules during the second of the 12 labors he performed as punishment for killing his family. It was sent by the jealous goddess Hera to hinder Hercules as he battled the water serpent Hydra, but he killed it with his club.

Cancer is visible in the Northern Hemisphere in the early spring. It can be seen in the Southern Hemisphere during autumn. When trying to find it, don’t expect to find the shape of a crab in the sky—it looks more like a faint, upside-down Y. 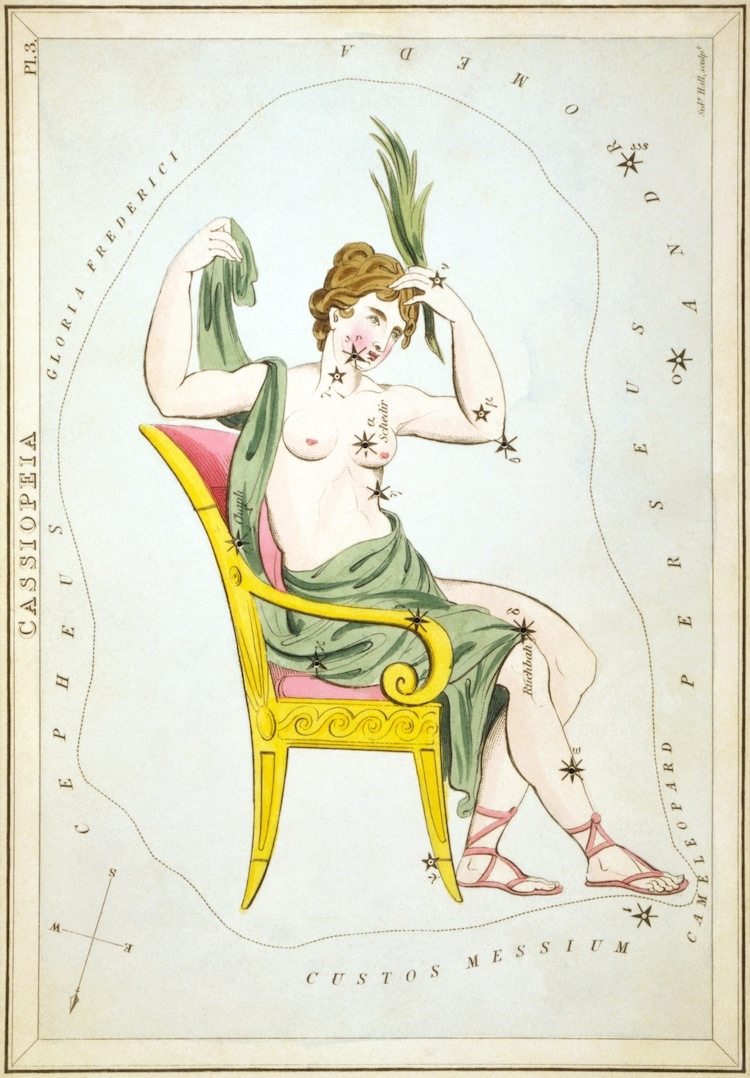 With its distinctive “W” shape formed by five bright stars, Cassiopeia is one of the most easily recognizable constellations in the northern night sky.

The constellation is named after the vain queen Cassiopeia in Greek Mythology, wife of the King Cepheus of Aethiopia. As the legend goes, Cassiopeia boasted that she was more beautiful than the sea nymphs called the Nereids. Her claim angered Poseidon, god of the sea, who sent a sea monster called Cetus to destroy the kingdom. Cassiopeia’s daughter, Princess Andromeda, was left bound to a rock as prey for the monster, but she was rescued by Perseus the Hero whom she later married.

Cassiopeia, Cepheus, and Princess Andromeda were all elevated to the sky as stars. Only Cassiopeia suffered humiliation; she was forced to wheel around the North Celestial Pole on her throne, spending half of her time upside-down, clinging to it so she does’t fall off.

Cassiopeia can be found high in the northeastern sky on October evenings, not far from Polaris, the North Star. 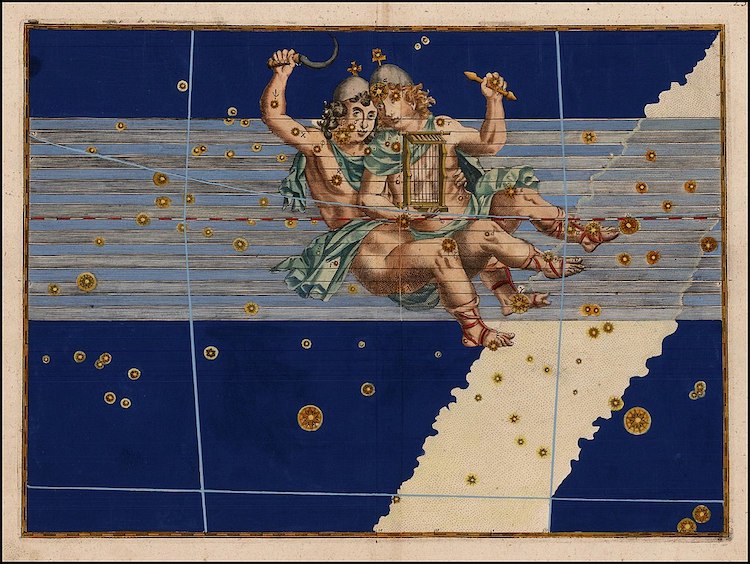 Gemini is one of the constellations of the zodiac and is located in the Northern Sky. Gemini is the 30th largest constellation in the sky, occupying an area of 514 square degrees.

Gemini means “the twins” in Latin. The constellation represents the twins Castor and Polydeuces (or Pollux) in Greek Mythology. The twins’ mother, Spartan Queen Leda, was seduced by Zeus, who visited the queen in the form of a swan. She became pregnant with the immortal Polydeuces and Helen (who later became the legendary Helen of Troy). Leda later also became pregnant with Castor and Clytemnestra. These siblings were fathered by Tyndareus and, unlike Zeus’ children, they were mortal.

Despite having different fathers, Castor and Polydeuces grew up together and were very close. One day, the brothers clashed with another set of twins, Idas and Lynceus, when they fought over two women, Phoebe and Hilaira. Lynceus killed Castor by stabbing him with a sword. Devastated Polydeuces asked Zeus to share his immortality with his murdered brother and the god placed them both in the sky, where they remain inseparable as the constellation Gemini.

The Gemini constellation is best viewed is during February. Look northeast of the constellation Orion and between the Taurus and Cancer constellations and you should find its two bright stars representing Castor and Pollux. Alongside them are a couple of star lines forming their bodies, giving the constellation a rough “U” shape. 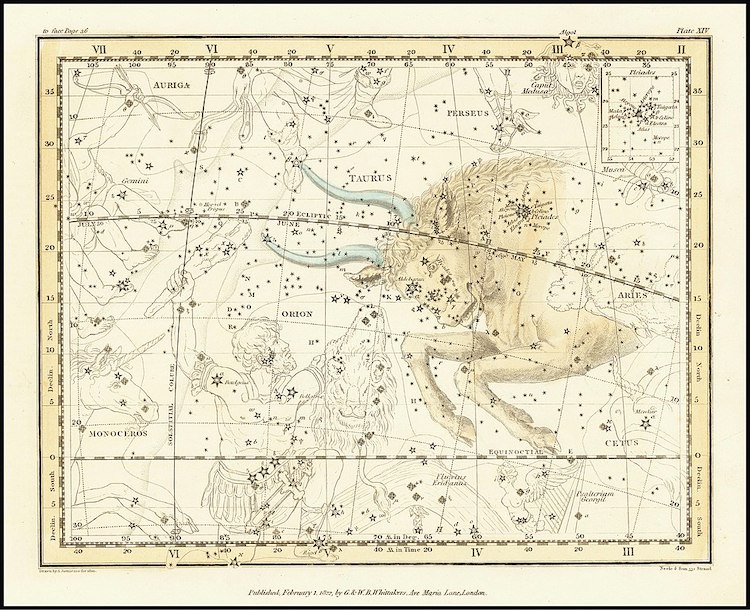 In Greek Mythology, there are several stories involving the bull. In the most famous, Zeus transformed himself into a white bull with golden horns named Taurus after fell in love with the Phoenician Princess Europa. He used the disguise to carry Europa away to Crete on his back.

The Taurus constellation is fairly easy to find due to its bright Aldebaran star and its prominent “V” shape which represents the head and horns of the bull. In the Northern Hemisphere, the bull charges through the sky from November to March, but the constellation is at its most visible in January.

Ursa Major, aka the Big Dipper 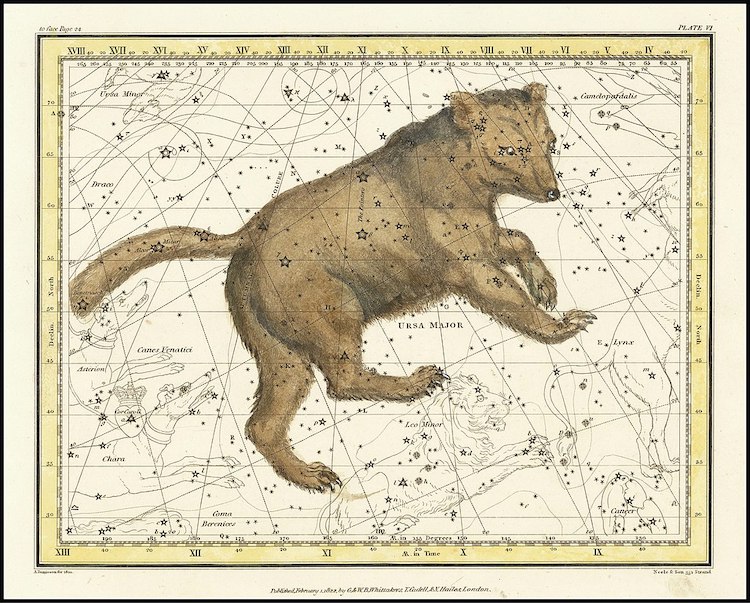 The Big Dipper is often mistaken for its own constellation, but it's actually an asterism within the constellation of Ursa Major. Always visible in the Northern Hemisphere, it’s one of the most recognized star patterns. Its name in Latin means “greater bear” or “she bear.”

As the Greek myth goes, Zeus fell in love with a young nymph named Callisto. Hera, Zeus’s wife, was jealous and transformed Callisto into a bear. While she was in animal form, she came across her son Arcas, but he didn’t recognize the bear as his mother and tried to shoot her. Zeus intervened and turned Acras into a bear too. He placed Callisto (Ursa Major) and her son (Ursa Minor) permanently in the night sky.

The seven brightest stars of the Big Dipper form part of the backside and tail of the large bear, while other smaller stars make up the rest of its shape. Ursa Major is best viewed during April.

Ursa Minor, aka the Little Dipper 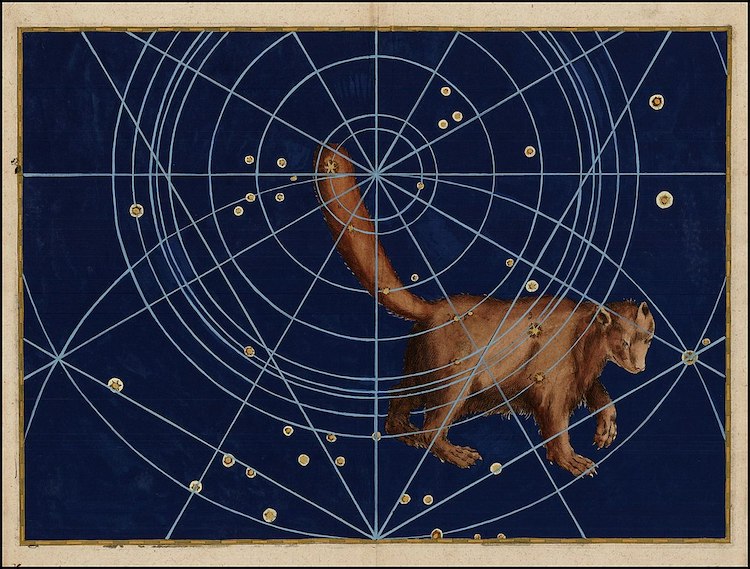 Ursa Minor, also known as the Little Dipper, is famous for containing Polaris, the North Star. The constellation is visualized as a baby bear with an unusually long tail. It can be distinguished from the Big Dipper not only by its smaller size but by the up-turned curvature of the tail.

Like Ursa Major, this constellation is visible all year round. When you’ve found the North Star at the end of the bear’s tail, it’s then easy to identify the rest of the constellation. 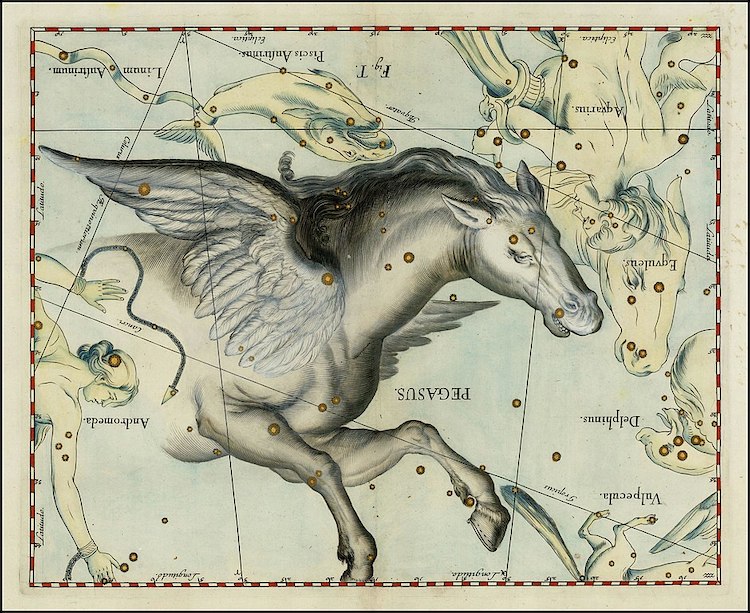 Pegasus is one of the most prominent constellations in the northern sky. It was listed by the astronomer Ptolemy during the 2nd century and was named after a winged horse in Greek mythology. The brightest star in the constellation is Epsilon Pegasi, which forms the creature's nose.

Pegasus belonged to Poseidon, the god of the sea, earthquakes, and storms. In a battle between Perseus and Medusa, Perseus decapitated her and the winged horse “sprang” from her blood.

Pegasus was stolen by the Greek hero Bellerophon with the help of Athena and Poseidon. Pegasus allowed Bellerophon to ride him in order to defeat the monstrous Chimera. However, Bellerophon later fell from the creature’s back while trying to reach Mount Olympus. After some time, the riderless Pegasus reached Olympus and Zeus transformed him into the famous constellation. Pegasus was also known for bringing thunder and lightning to Zeus whenever he needed it.

In the Northern Hemisphere, the Pegasus constellation can be found high in the sky from the end of summer through autumn. If you are below the equator, look for Pegasus from late winter until spring. 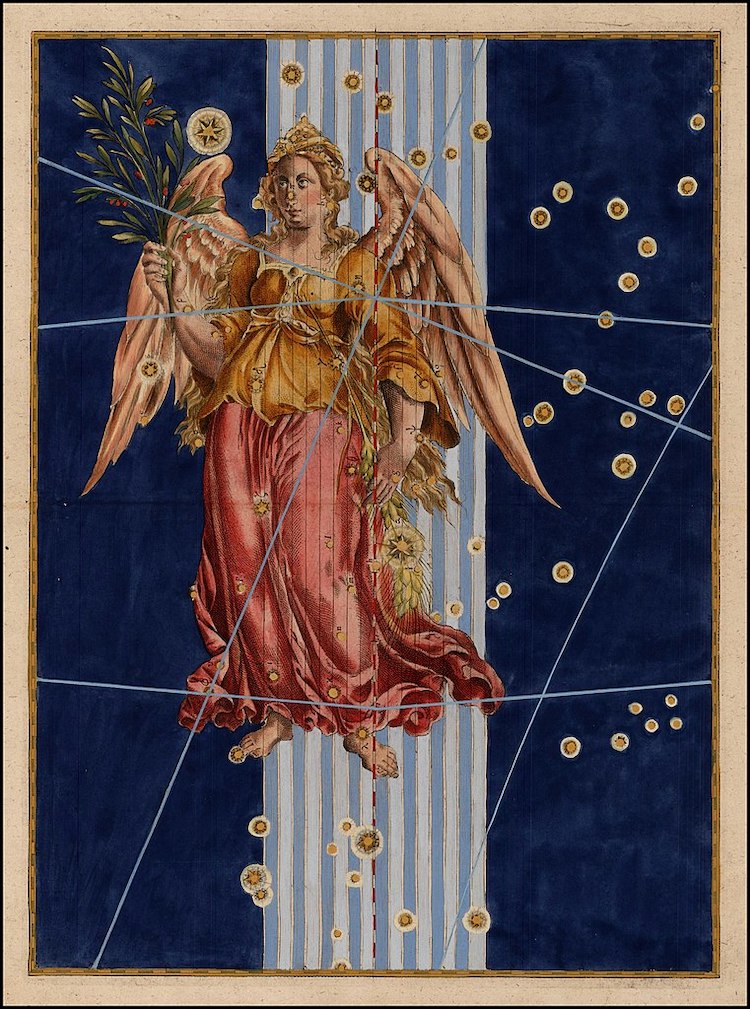 The constellation Virgo is often said to personify Persephone, the daughter of Demeter, the harvest goddess. According to the Greek myth, Earth experienced eternal spring until the pivotal day when the god of the underworld abducted Persephone, the maiden of spring. Demeter was so saddened by the loss that she abandoned her role as the goddess of fruitfulness and fertility. In some parts of the world, winter turned the terrain into an icy wasteland, and elsewhere the sun scorched the earth and destroyed the harvest.

Persephone returned to her mother, but because she ate the pomegranate, she was punished and bound to return to the underworld for four months every year. To this day, spring returns to the Northern Hemisphere when Persephone is reunited with Demeter, but winter prevails when she dwells in the underworld.

From the perspective of the Northern Hemisphere, Virgo is absent from the sky during late autumn, winter, and early spring. However, by March and April the constellation is visible all night. Virgo can easily be spotted thanks to its bright blue-white star, Spica. 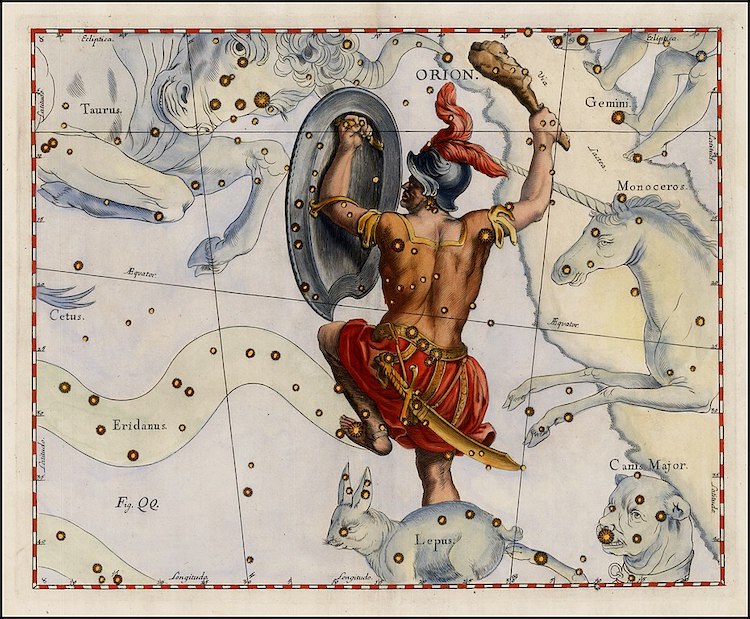 The Orion constellation is named after Orion the hunter in Greek mythology. Located on the celestial equator and made up of bright young blue giants or supergiants, it is one of the most prominent and recognizable constellations in the sky and can be seen throughout the world.

In mythology, Orion was a supernaturally gifted hunter who was the son of Poseidon. He proclaimed himself as the greatest hunter in the world. This angered Hera, the wife of Zeus, who had a scorpion kill him (this later became the constellation Scorpius). Out of compassion, Zeus put Orion into the sky.

Orion’s Belt includes the three most prominent stars in the constellation: Alnilam, Mintaka, and Alnitak. Betelgeuse, the second-brightest star in Orion, marks the right shoulder of the hunter, and Bellatrix serves as his left shoulder. The Orion Nebula acts as the middle “star” in Orion’s sword, which hangs off Orion's Belt. In the sky, Orion is posed fighting against Taurus the bull with a shield and club.