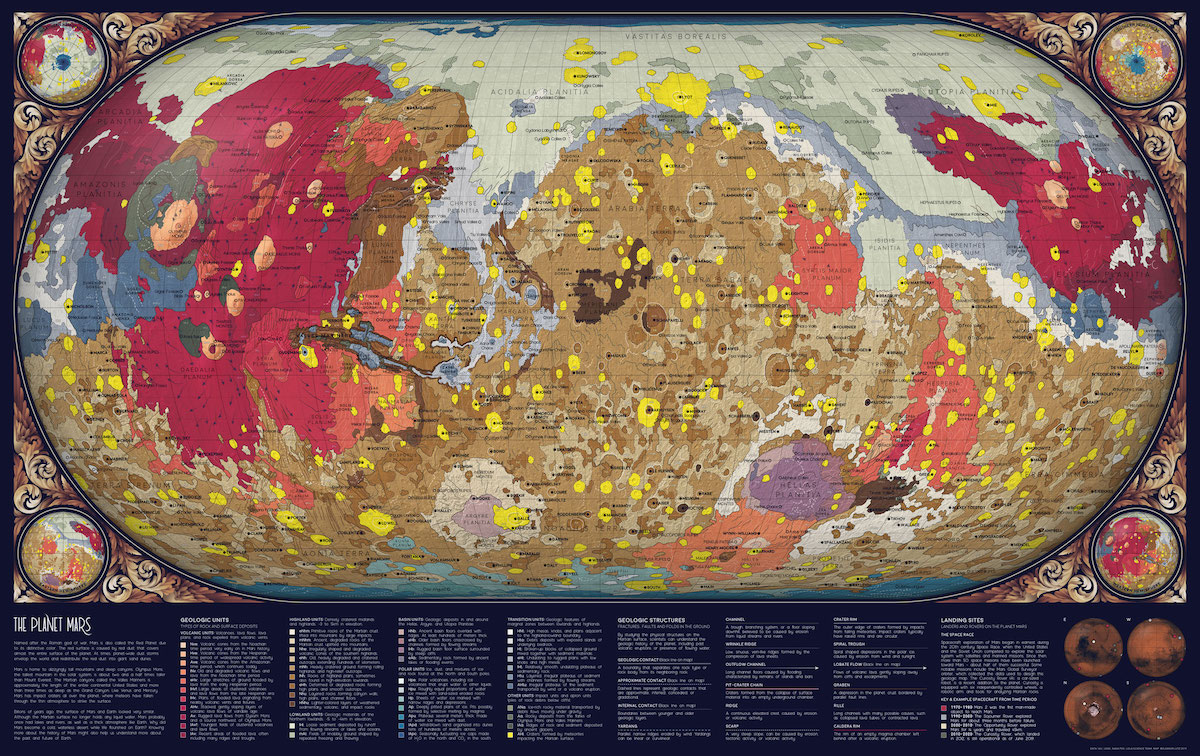 Geology of Mars (Click to enlarge)
This post may contain affiliate links. If you make a purchase, My Modern Met may earn an affiliate commission. Please read our disclosure for more info.

Biology graduate student Eleanor Lutz uses her spare time working on Tabletop Whale. This science illustration blog is an outlet for her creativity, allowing her to publish drawings, infographics, and data visualizations relating to science. Her latest project, Atlas of Space, is an exciting set of astronomy maps. Using open source datasets, she's designed incredibly artistic visualizations that have a vintage feel to them.

Attracted to the large quantities of data available within the astronomy community, Lutz mined organizations like NASA and the United States Geological Survey to pull together the maps. The graduate student benefitted from her knowledge of Python, a high-level programming language she uses for her Ph.D. research. Using the program, she was able to crunch the incredible quantities of open source data and transform it into something you'd want to hang on your wall.

Lutz has been working on the project for the past year and a half, just announcing it to the public in June 2019. Since then, she's been releasing a map each week. Every map is accompanied by an interesting explanation of how she achieved her results, as well as the sources used in the work.

The Atlas of Space is comprised of ten maps, including an orbit map of over 18,000 asteroids, a topographical map of Mars, a map of the constellations in the Western sky, and a map of the moon's geology. Rendered in stunning color to accompany the precise detail, Lutz's maps are an incredible way to visualize astronomy.

While there were some challenges along the way—she had to abandon an idea of doing a map for each planet when she realized not enough data existed for less well-explored planets like Uranus and Neptune—there were also some pleasant surprises.

“The most surprising part of the project was all of the help and advice offered by the astronomy community,” Lutz shared with My Modern Met. “I asked many astronomers for help with this project, and I was really happy to find that many scientists were willing to meet with me, or send me detailed tutorials or helpful articles over email.”

In the end, though design isn't her day job, Lutz's love for drawing and sketching has allowed to her gain an even deeper appreciation for the solar system. “I'm hoping to share my feeling that the solar system is a pretty amazing place, and that it's even more amazing that we understand so much about it.”

The Atlas of Space maps are also available for purchase.

Check out more of the impression astronomy maps from Atlas of Space. 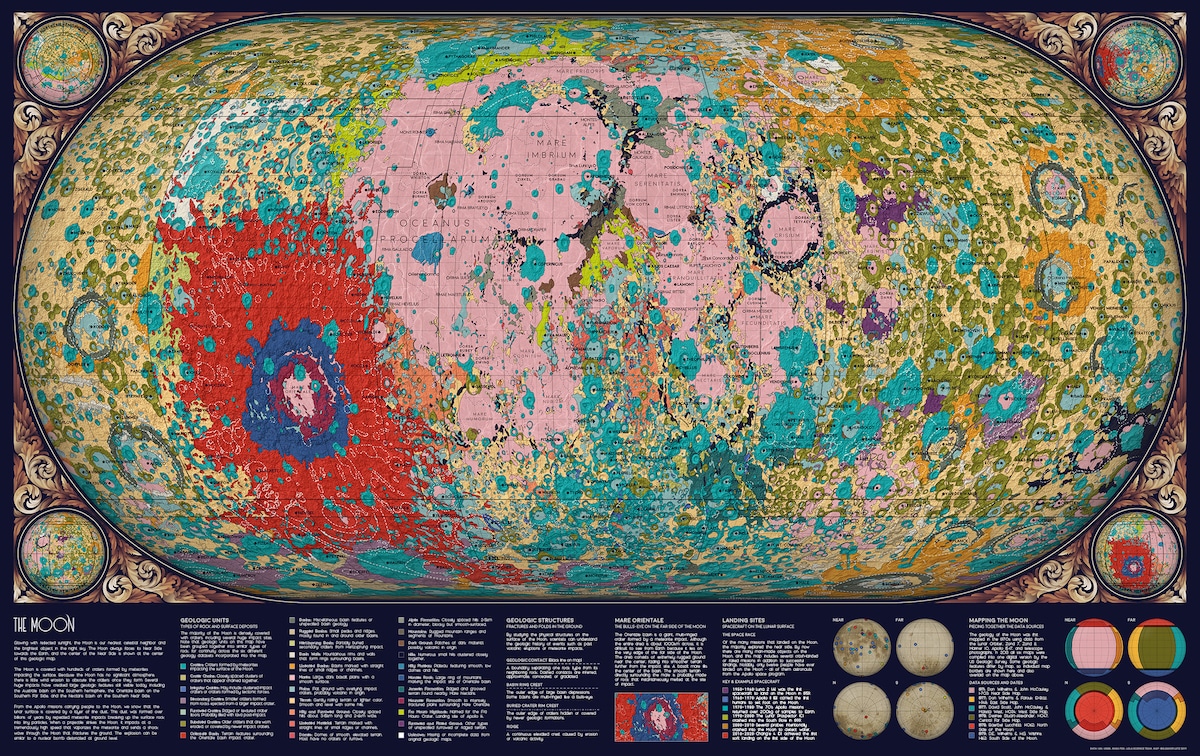 Detail of geological map of the Moon. 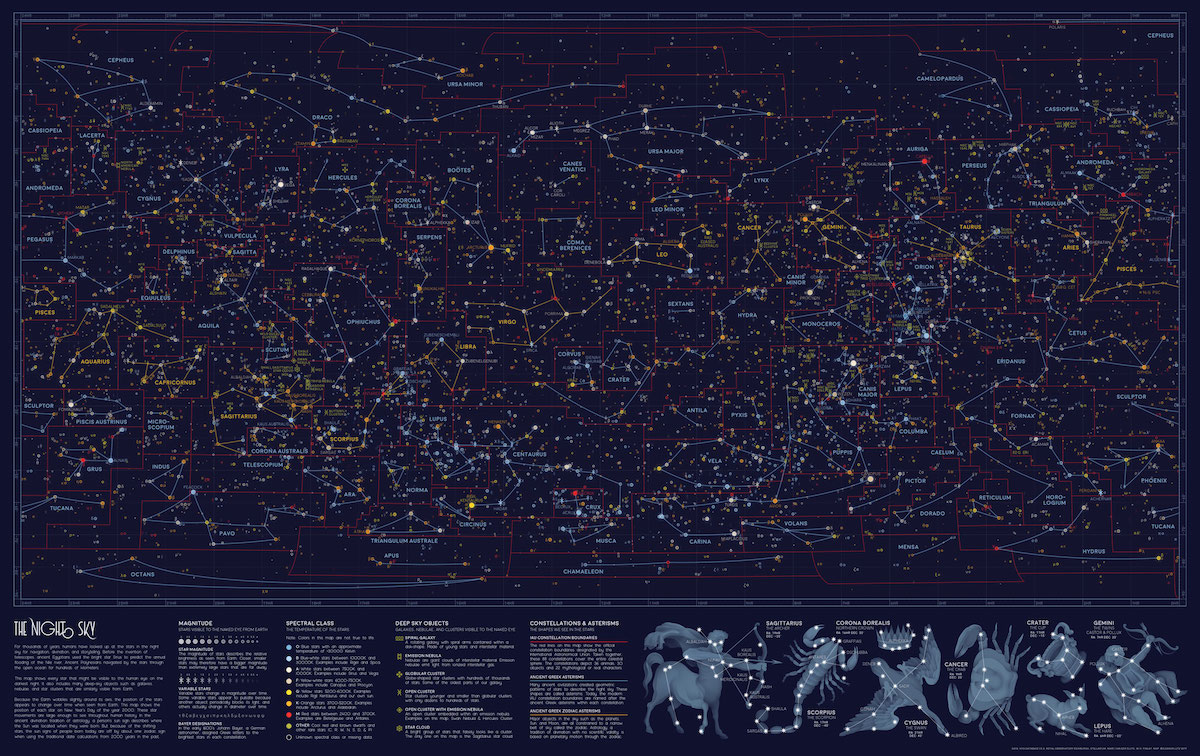 Detail of constellation map of the Western hemisphere. 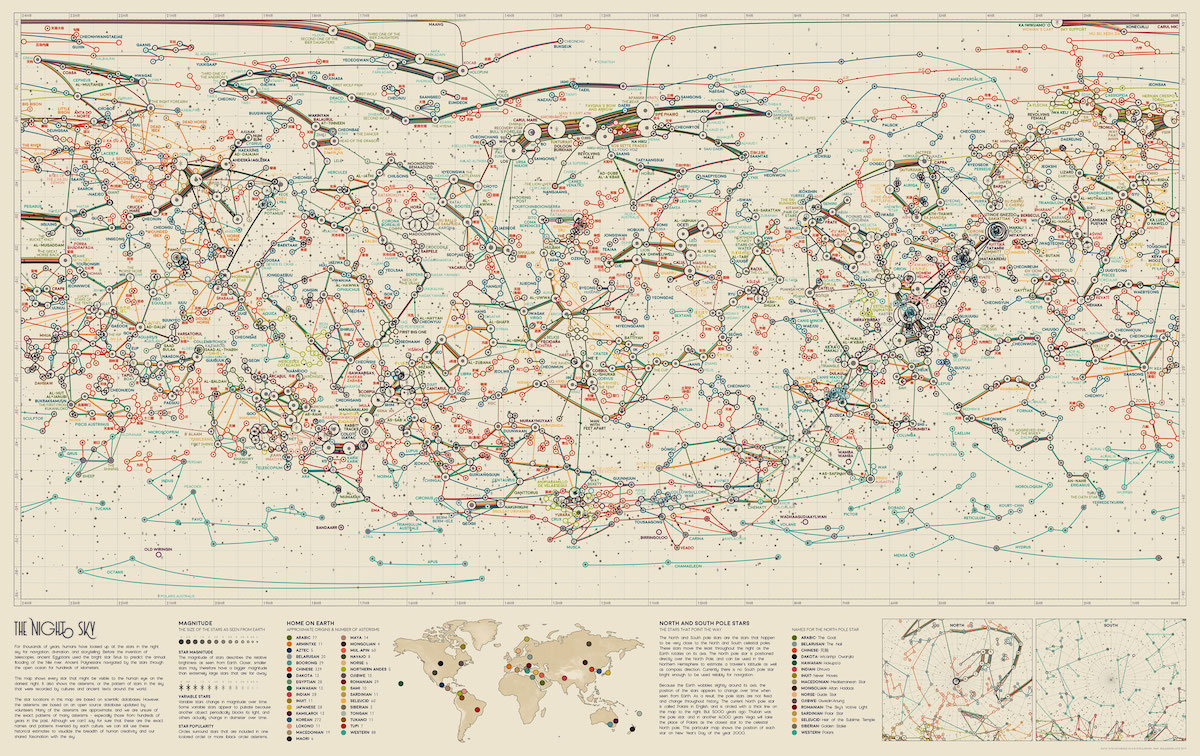 Constellations from ancient cultures around the world (Click to enlarge)

These topographical maps of different planets and celestial bodies have a vintage flair. 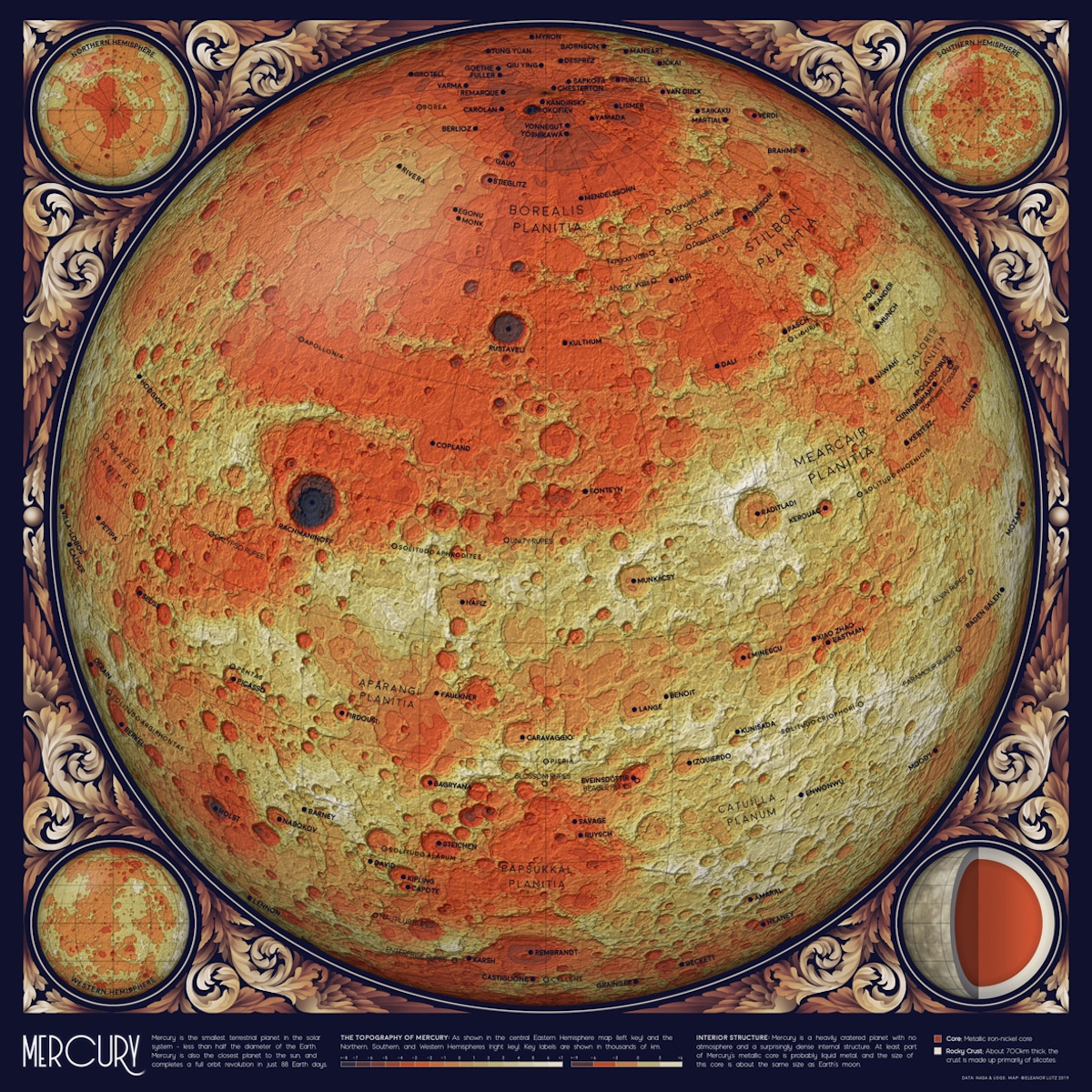 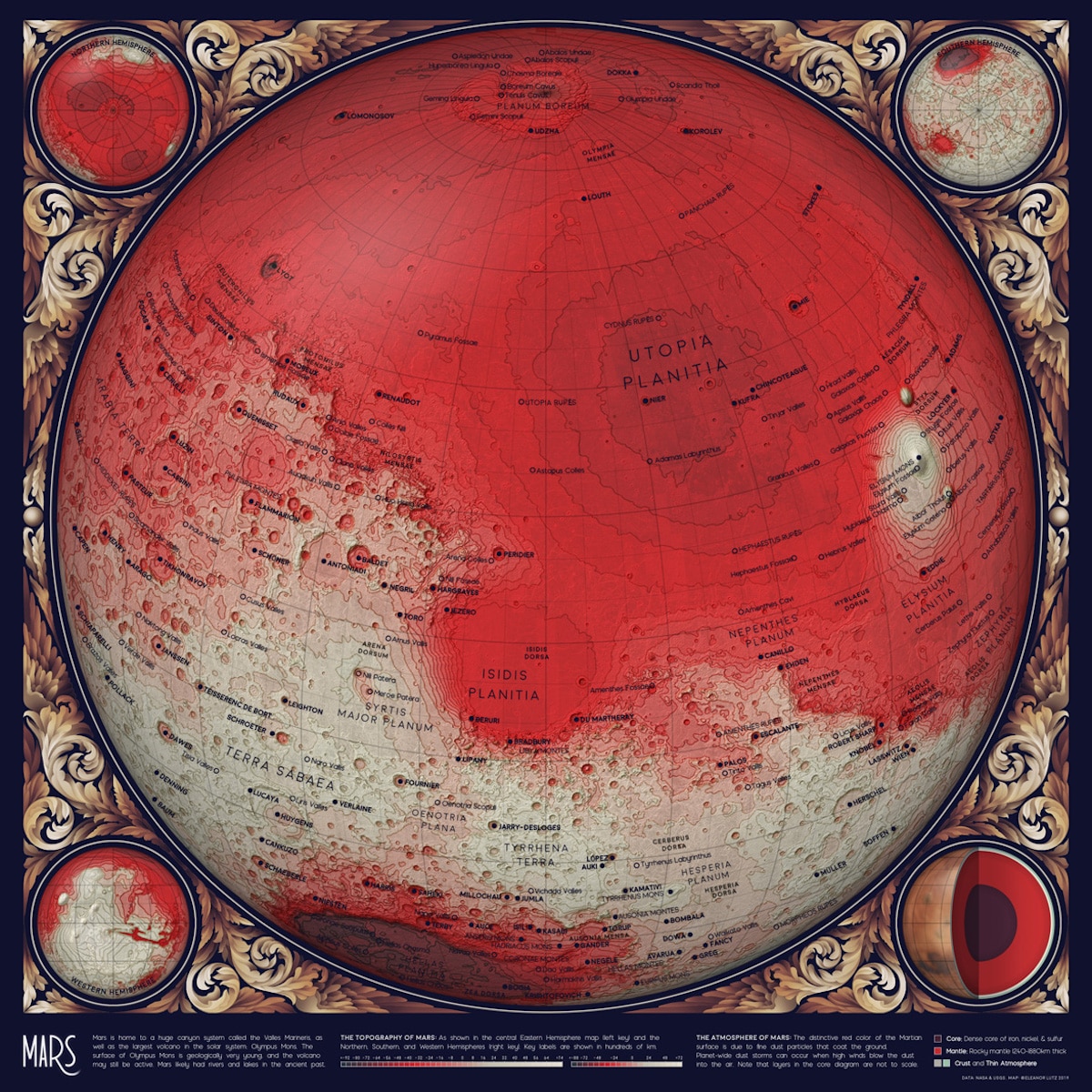 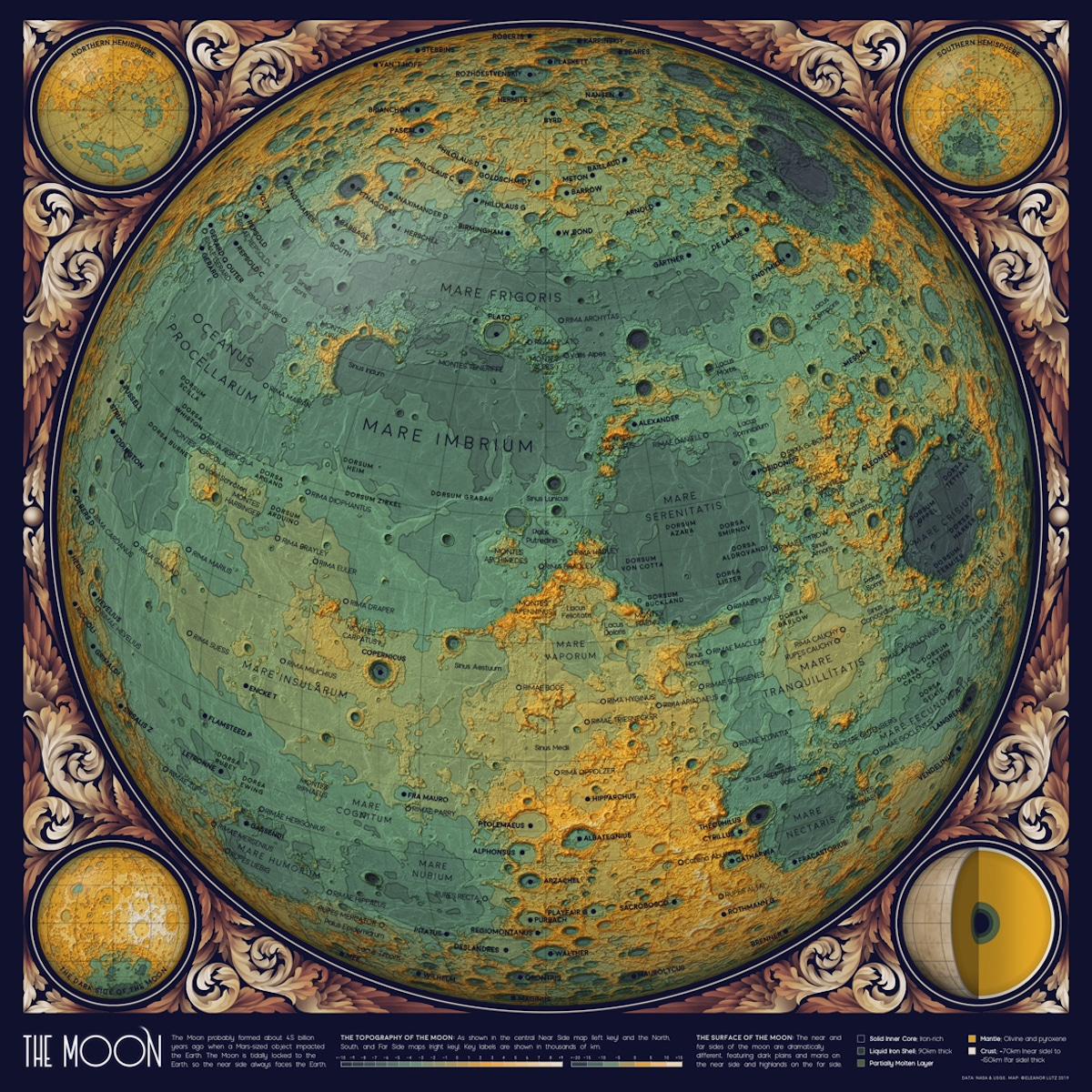 Topographical map of the Moon

Perhaps the most impressive map is this look at the orbit of everything in the solar system over 10 km. 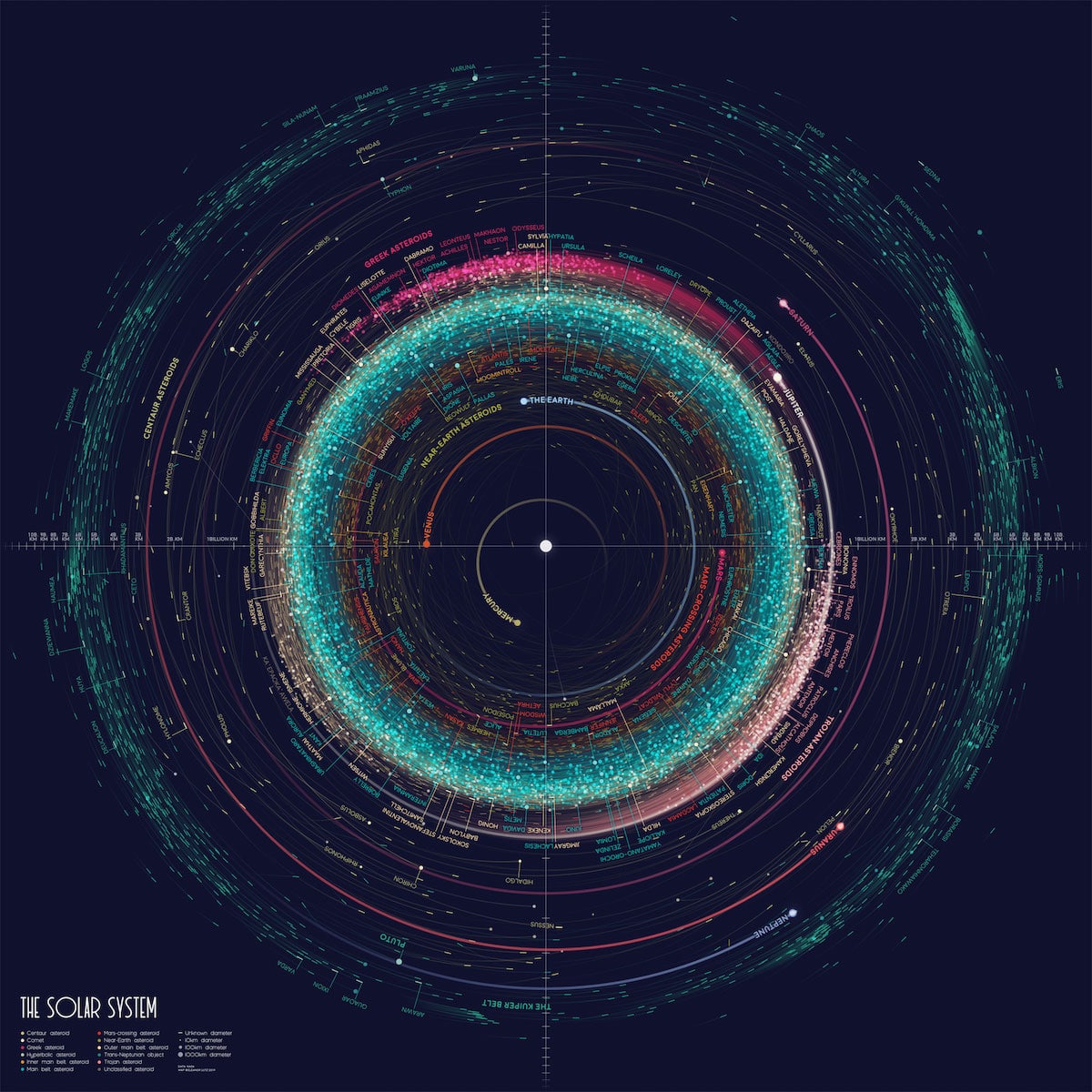 This includes 18,000 asteroids and comets. 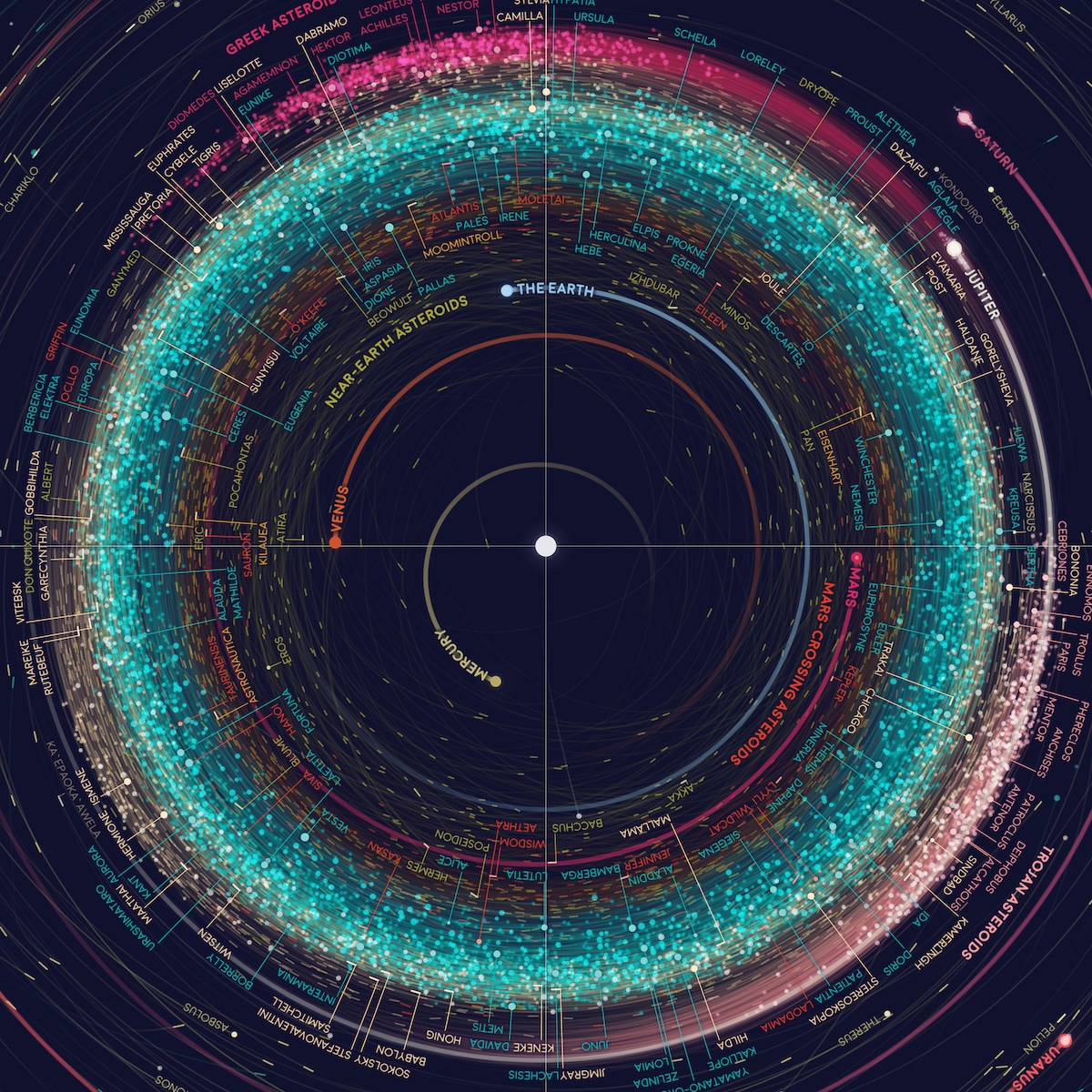 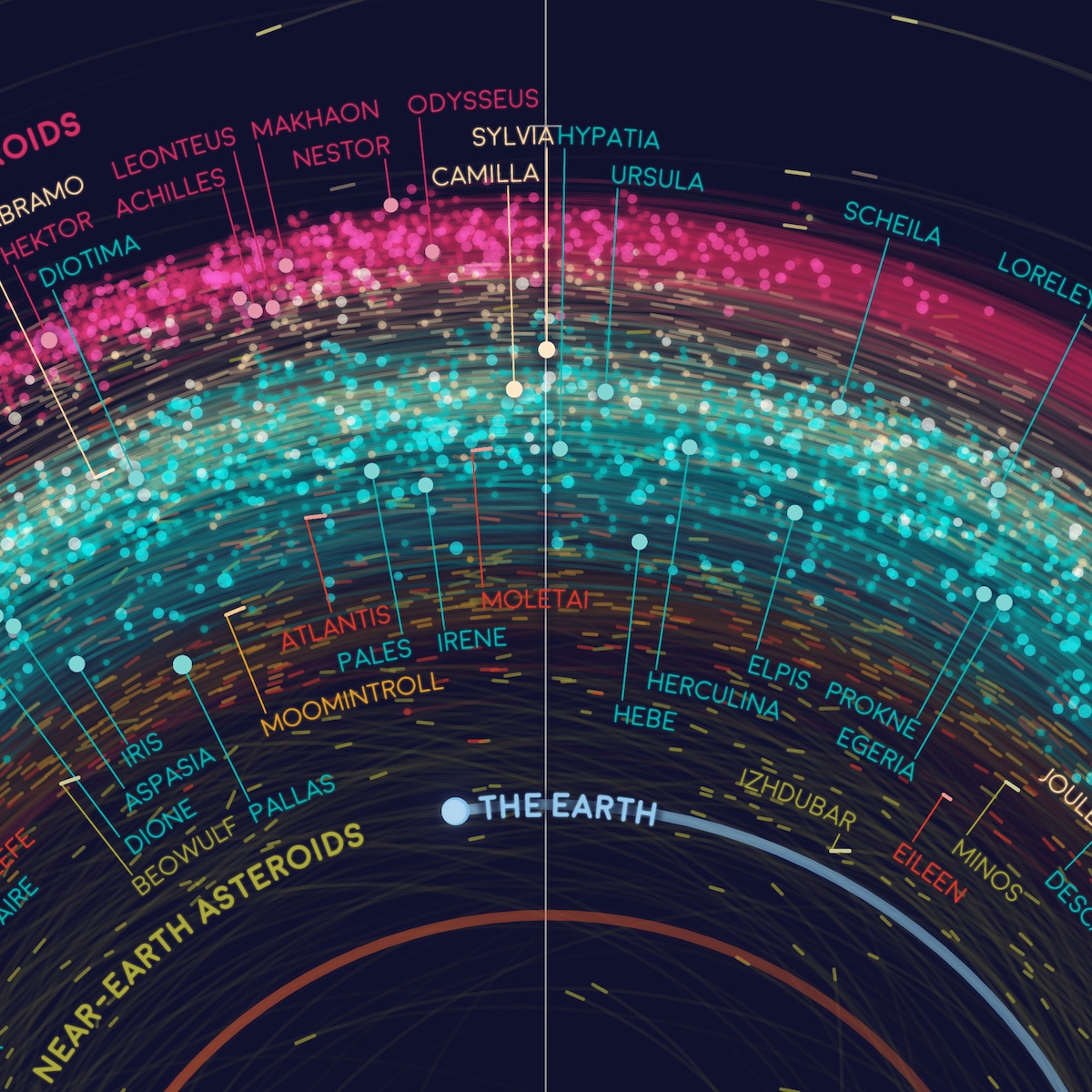 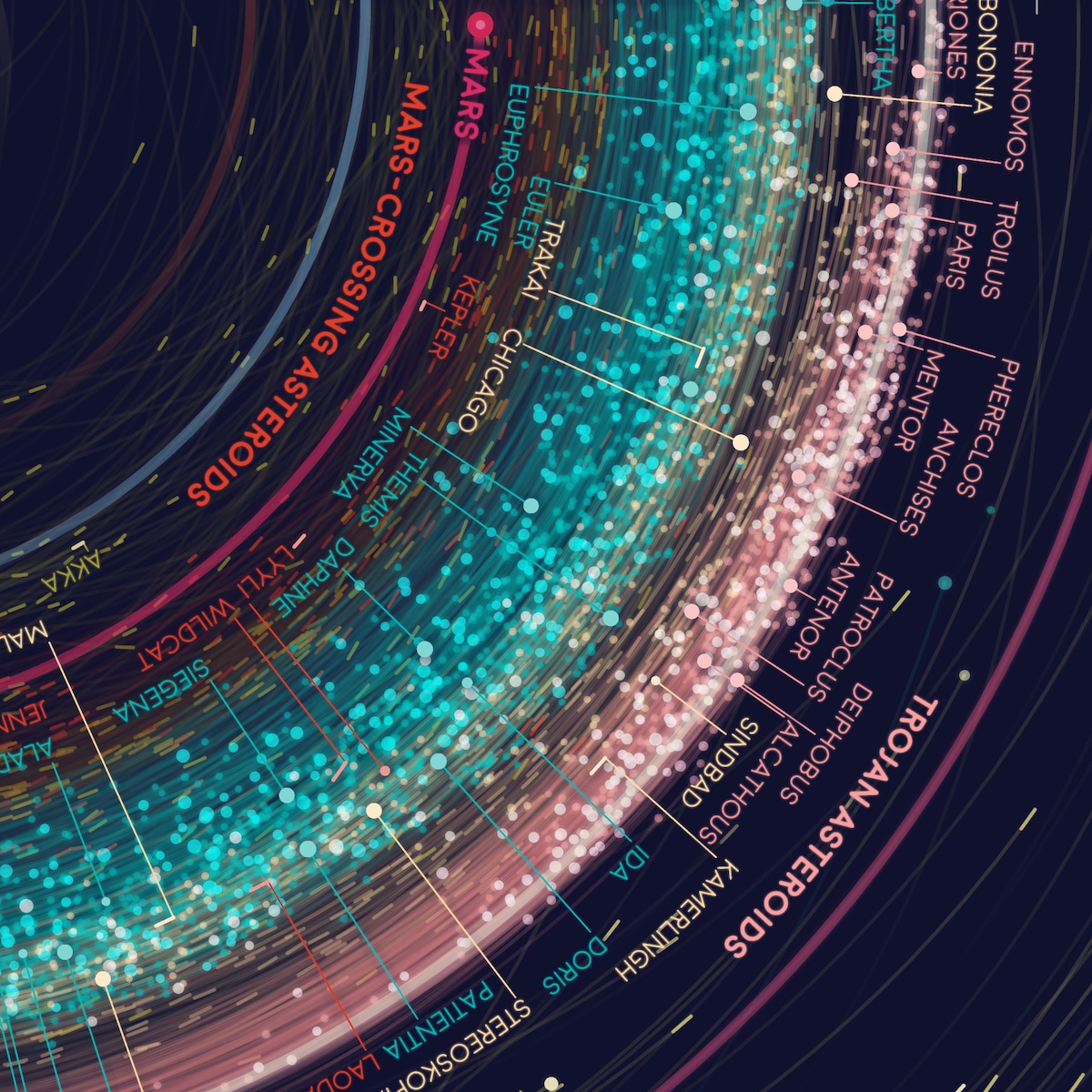 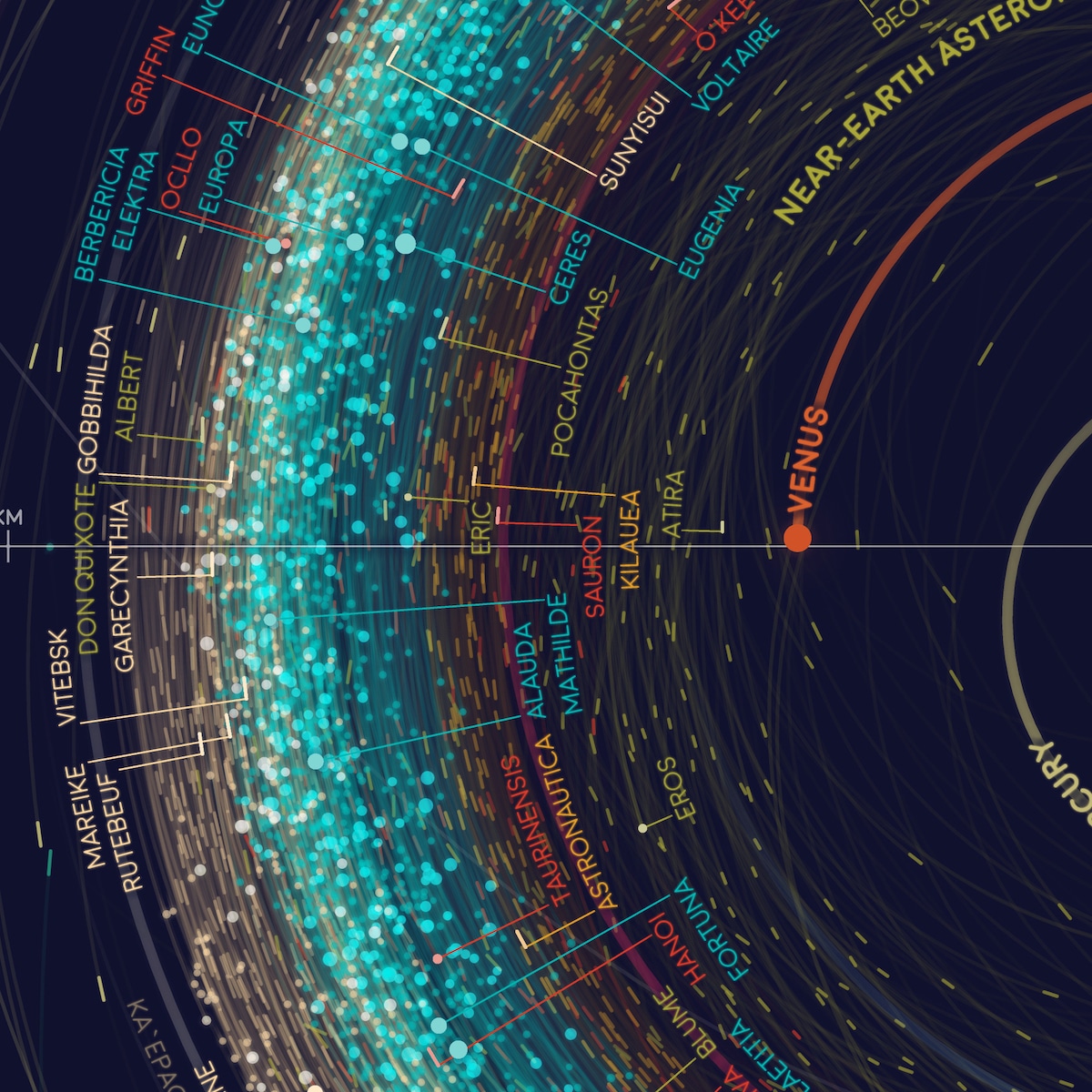 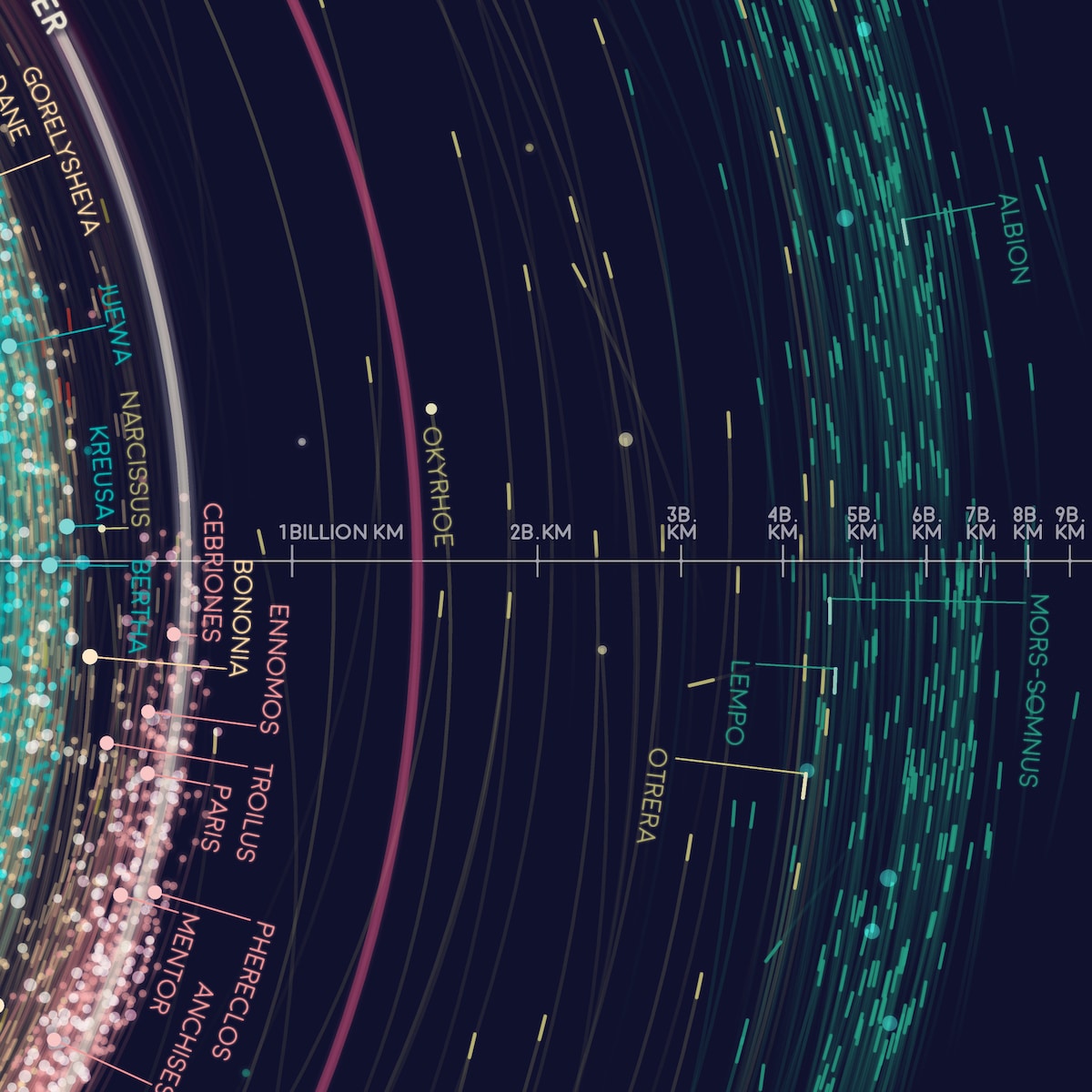 Love these astronomy maps? Share
Like My Modern Met on Facebook
Get Our Weekly Newsletter
Become a
My Modern Met Member
As a member, you'll join us in our effort to support the arts.
Become a Member
Explore member benefits