The Inspiring Failures of Legendary Icons 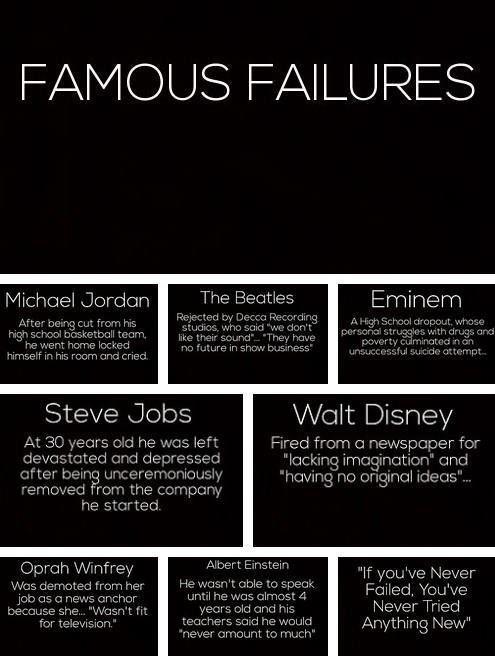 Focusing on the negative can only foster more negativity; however, this informative graphic, revealing the failures of some of the most well-known and renowned individuals in history, is somehow uplifting and motivating. The graphic, aptly labeled Famous Failures, features the unsuccessful endeavors of some of history's greatest talents, minds, and icons.

From Oprah Winfrey's demotion as a news anchor because she “wasn't fit for television” to Albert Einstein's teachers saying he would “never amount to much” due to his inability to speak until the age of four, the graphic exposes the hurdles these incredibly prosperous people had to jump. Failure breeds success, depending on how one chooses to react. Late Canadian-American actress Mary Pickford once said, “You may have a fresh start any moment you choose, for this thing we call ‘failure' is not the falling down, but the staying down.”

Walt Disney may have been fired from a newspaper for “lacking imagination” but that didn't keep him down. His creative legacy lives on to this day, over forty years since his passing. Apple co-founder Steve Jobs also got right back up after losing his job at the company he started. It's inspiring to hear that the great visionary had been “devastated and depressed” like many others after losing their jobs, but arose a greater man. It certainly sends the message to never give up.

While the origins of the graphic are still unclear, despite some sources erroneously crediting its creation to Schne Texte, it has found its way all across the internet, with great thanks to famed Star Trek actor George Takei sharing it on his Facebook wall. He captions the picture with some wise words: “Often the best thing that can happen is to fall flat on your face. It is through failure that we truly learn.”

via [Design You Trust]