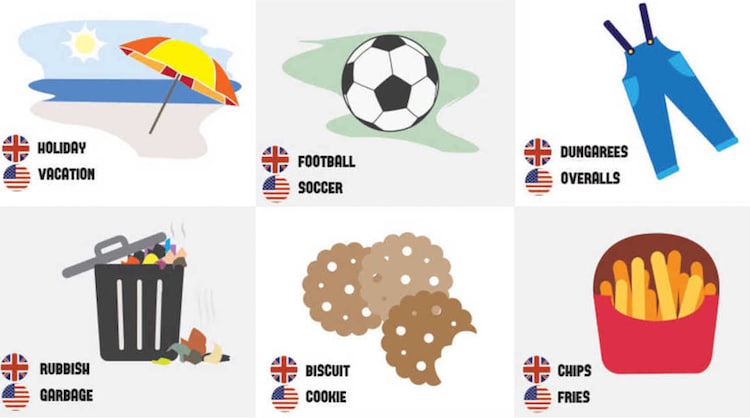 Americans may technically share a language with their British neighbors/neighbours, but that doesn't mean that each country's version of English is identical. As illustrated in an ingenious infographic by GrammarCheck—a website that offers editing and proofreading services—there are numerous differences between British and American English, from subtle spelling changes to entirely different designations for common concepts.

Rendered in a colorful and minimalist style, the infographic presents 63 differences between the two branches of English. To help explain the dissimilarities, each object or idea is represented by a simple illustration and accompanied by 2 words: its British title, and its American name.

Some of the highlighted word pairings—like taxi and cab, lift and elevator, and garden and yard—are simply fascinating, while others carry a bit more weight. For example, if you're in Great Britain, ordering “chips” will get you fries, agreeing to play “football” means you better be good at soccer, and, if you compliment someone's “pants,” you're actually praising their underwear. Thanks to this helpful infographic, however, both Americans and Britons are sure to dodge these linguistic blunders during a vacation—or holiday—across the pond!

Check out all 63 difference between British and American English below!