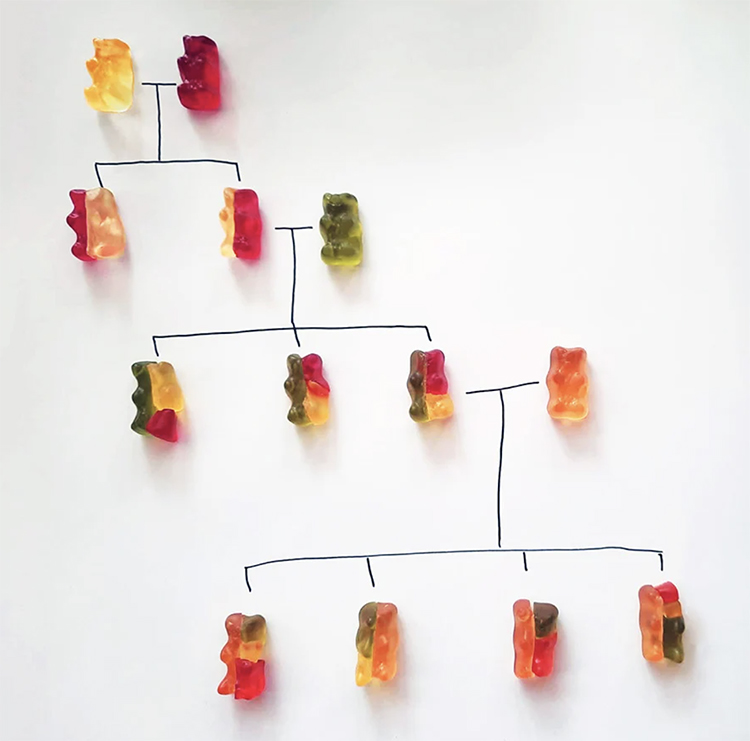 How did you eat gummy bears when you were a kid? As youngsters, many of us made Frankenstein-esque creations from different colors of the sweet treats. What was once a fun snack time activity can now be highly educational. Using gummy bears in a variety of colors, one can make colorful family trees illustrating how genetics are passed down from parents to children. Although science teachers have long used this teaching tactic, the genetic gummy bear experiment has recently gone viral through the tweets of an NYU social neuroscience professor named Jay Van Bavel. In case you've forgotten everything you learned in high school, grab some gummy bears and enjoy a quick refresher.

Despite the mathematical simplicity of receiving DNA from one's mother and father in equal measure, as one moves down a family tree, certain DNA will no longer be represented in descendants. DNA continues to recombine as it is passed along. For this reason, someone with excellent genealogy skills might know that they had a single Spanish ancestor in the 16th century. However, over the years, this DNA may have been completely eliminated from the modern person's DNA—as a result, their DNA test results would not suggest a Spanish ancestor.

To determine the genetic possibilities for each gummy bear combination, you will need to use Punnett Squares. These simple charts are a quick method to determine which traits—dominant or recessive—will appear in offspring. Teachers can use this lesson plan. For a quick refreshers on alleles (gene variants) and how they interact, see the video below. While the gummy bear genetics experiment will help you better understand the long-term passing of genetics, a simple Punnett Square can tell you why your parents both have brown eyes but yours are blue. Next time you are at the grocery store, pick up some Haribo gummy bears and get to work understanding your genes!

This gummy bear genetic experiment allows you to recombine the delicious pieces to show how genes are passed down and recombined from generation to generation.

To learn the rules, you will need Punnett Squares, a simple biology technique on dominant and recessive traits.

All images via a Jacinta Bowler/ScienceAlert [CC BY 3.0].