Interview: Meet the Photographer With a Dream Job as the “New Ansel Adams” 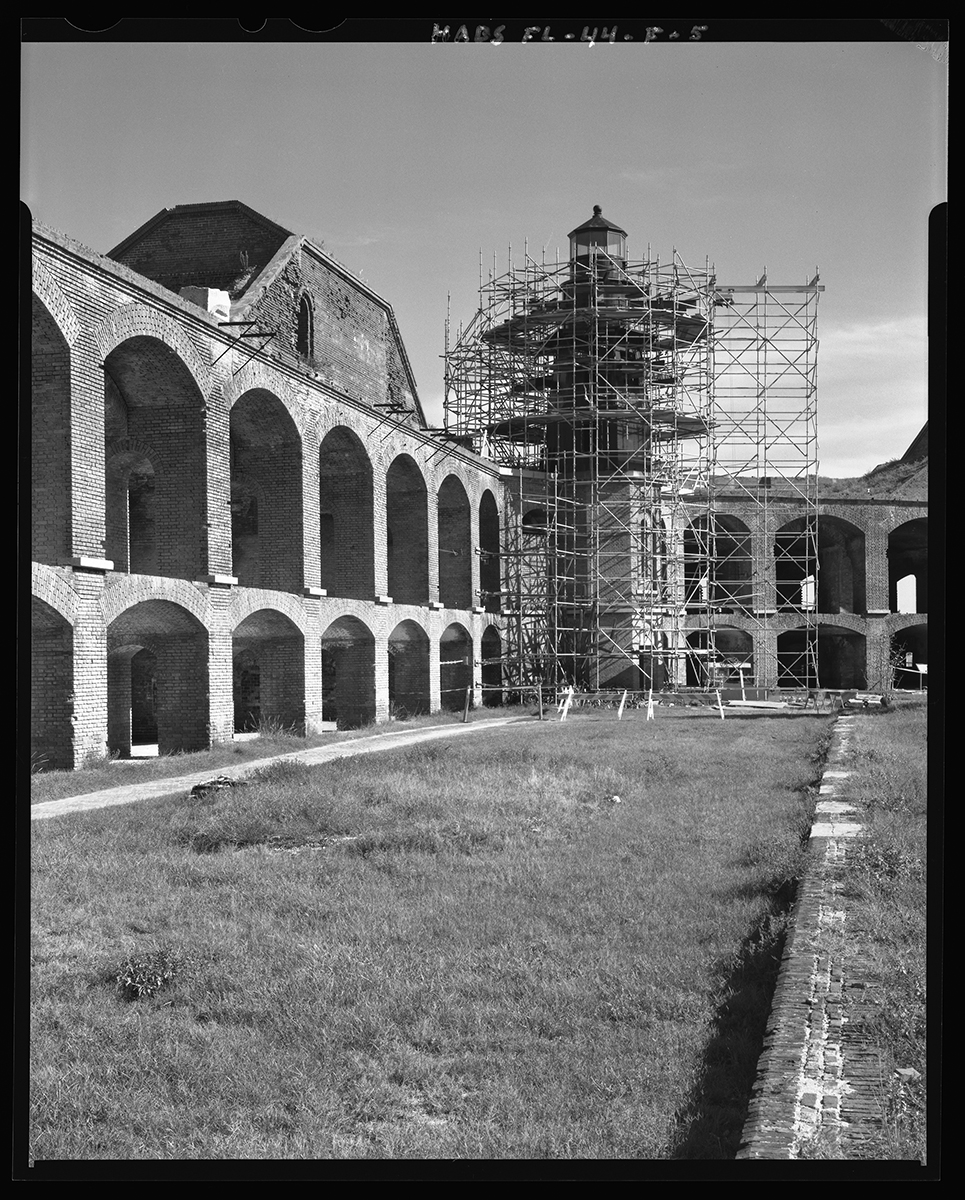 In 2015, photographers across the US were clamoring to fill a position once held by the iconic Ansel Adams. Listed online as Photographer, GS-1060-11/12, the job would require, most notably, shooting documentary images for the Library of Congress. Although many applied, Jarob J. Ortiz ultimately got the gig as National Parks Service Photographer and now spends his days recording historic spaces and places with a large format camera.

Although Adams was famous for documenting the National Parks, much of Ortiz’s job focuses on chronicling architecture and their interiors. Some are well known, like Ellis Island and Arlington National Cemetery, while others are more obscure. But regardless of their status as icons, the job is vital to capturing our history—sometimes before it's gone forever.

To say that the job keeps Ortiz busy is an understatement. “For reference,” he tells My Modern Met in an email, “I created over 800 usable large format views for our collection in 2017 alone.” We were honored to speak in-depth with Ortiz about how he first became interested in large format photography and learn more about what it’s like to hold the “Ansel Adams job.” Scroll down to read our exclusive interview. 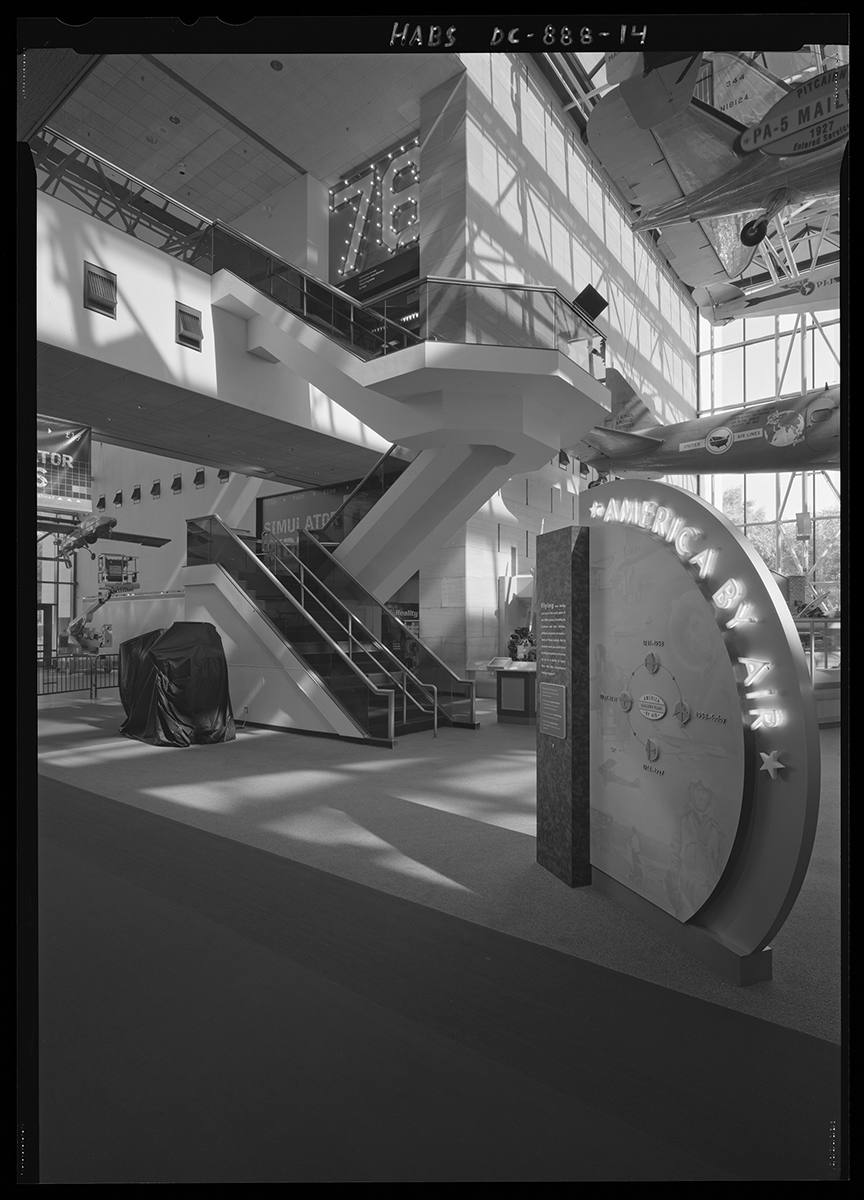 West staircase looking northwest from the “America by Air” exhibit with west entranceway on the left and the “Sea-Air Operations” entrance way pictured above inside the Smithsonian Air and Space Museum in Washington, DC.

I became interested in photography in 2009 after a friend of mine took an intro class to photography at the Milwaukee Area Technical College (MATC; the school I eventually went to for my photography degree). One day he sat me down and asked me to look at something he created in said class. At that point, he presented to me a piece of 35mm color transparency film. I had no idea what it was or what I was supposed to do with it. At that point, he instructed me to hold it up to the light and look at it. As soon as I did what he said, I was instantly intrigued and ultimately hooked. The idea that light was interacting with and being recorded with this piece of film was something I wanted to explore more. Less than a week later, I purchased my first camera… an Olympus OM-2 35mm SLR camera. I've kept a camera with me at all times ever since.

It was also at this point that my stepfather had introduced photography to my brother, Nathan; something that happened by coincidence (us getting into photography at the same time). We regularly explored the medium in depth as a team, figuring out what “worked” and what didn't, ultimately prepping us both to enter our respected photography programs (he attended Madison College in Madison, Wisconsin and I at the Milwaukee Area Technical College in Milwaukee, Wisconsin). 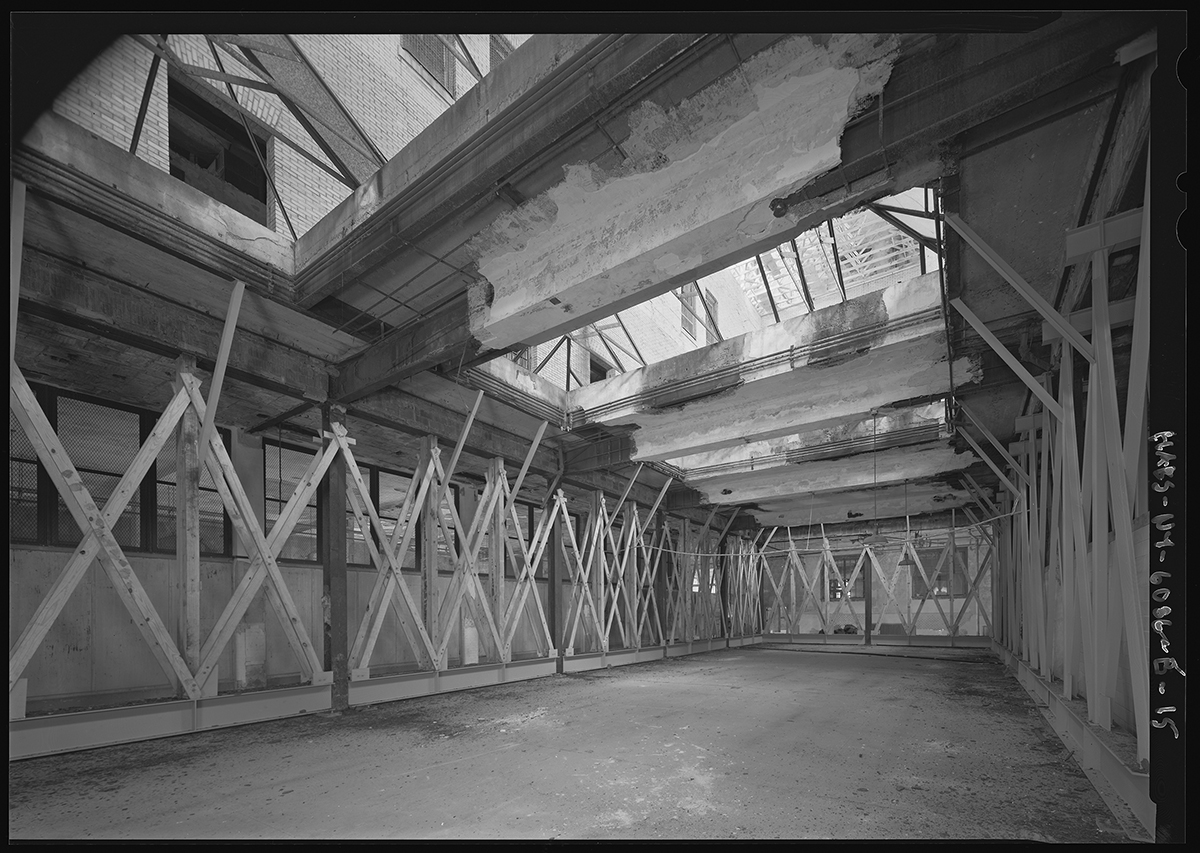 The 1st floor center room of Ellis Island's Baggage and Dormitory Building with a recently-installed support structure for the skylight windows above.

One of the requirements of the position is to know large format photography. When did this format first interest you?

I first discovered large format photography when my brother introduced me to the photography of Ansel Adams, most notably his image The Tetons & Snake River, Grand Tetons National Park, Wyoming, 1942. I was completely blown away that the image was captured on film. At that point, I asked my brother what camera the image was made with. He explained to me that it was a camera called a view camera. I instantly began researching the camera and discovered that not only was this the camera of choice for traditional landscape photographers, but also the choice for architectural and commercial photographers alike because of the camera's ability to correct for perspective and alter the plane of critical focus. This was a huge discovery for me as I was starting to take interest in architectural photography, but had not yet found a solution for correcting converging lines in imagery. This camera offered the solution I was looking for.

Where did you learn large format photography?

It was less than 6 months later that I discovered that the Milwaukee Area Technical College was still teaching traditional view camera techniques as well as the traditional zone system approach to large format photography. I immediately enrolled and the rest is history. 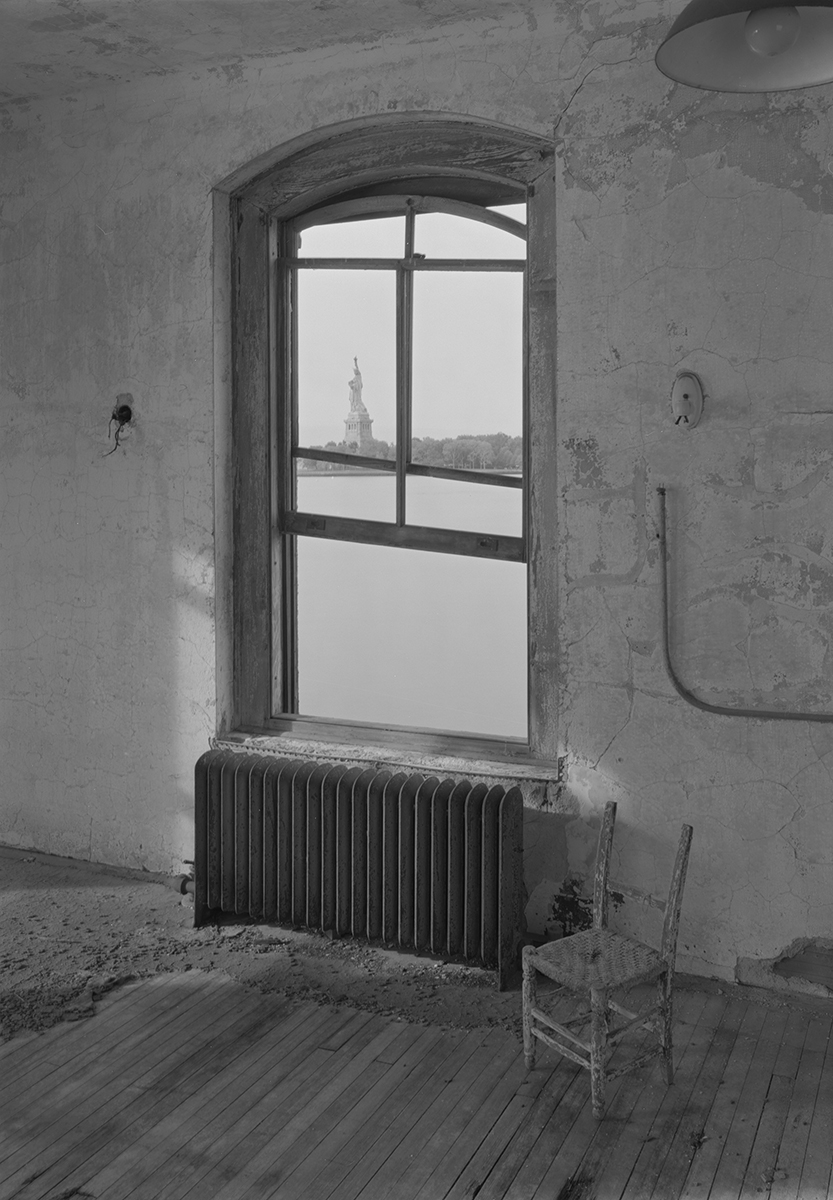 View of the Statue of Liberty in the early morning sun from the southernmost room of Isolation Ward K at Ellis Island in New York, NY.

The 1st floor center room of Ellis Island's Baggage and Dormitory Building with a recently-installed support structure for the skylight windows above.

What attracted you to the National Parks Service Photographer position?

Until I realized this (by way of reading the job description on USA Jobs) I was set on NOT applying for the job as I figured it was a position focused on capturing American Landscapes and did not think I had a portfolio strong enough to compete with other seasoned landscape photographers that had years of experience under their belts and the portfolio to match (that market is rather oversaturated in my opinion). But once I realized it was architecturally based I decided to go all in as I had a sound large-format architectural portfolio coupled with my working experience as a freelance architectural photographer. 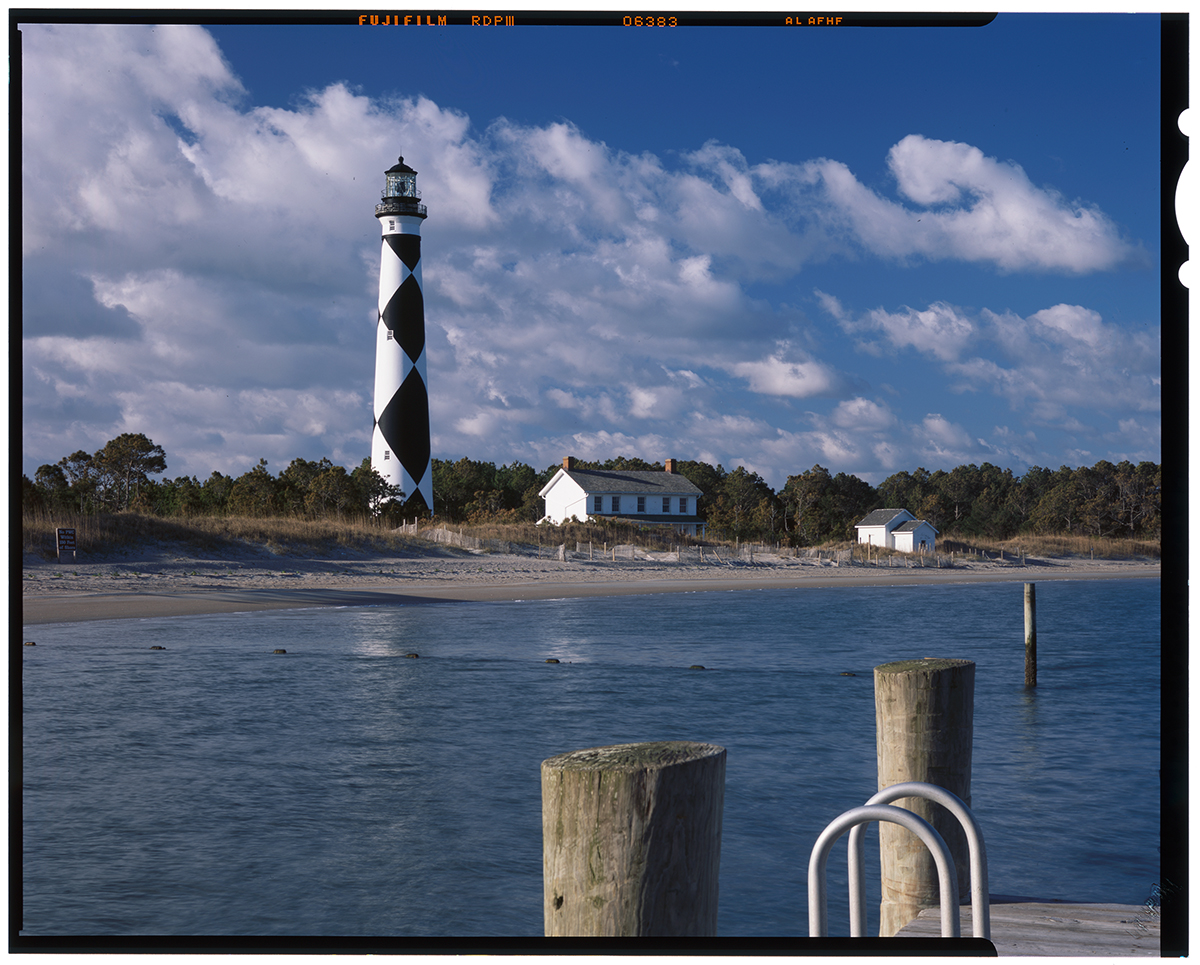 The Cape Lookout Lighthouse bathed in the early morning sunlight.

While many people might imagine the “Ansel Adams” job of the National Parks Service shooting only nature, you've captured subjects much more varied than that. What have you photographed since you've been in the position?

A quick rundown of projects I've done since being hired by the National Park Service would include Ellis Island in New York; Cape Hatteras Lighthouse, Cape Lookout Lighthouse, and the Ocracoke Lighthouse all of the North Carolina Outer Banks; the American Press Institute in Reston, VA (since demolished); the Bloede Dam on the Patapsco River in Maryland; the 210 Reliance Class Cutters for the United States Coast Guard; the Amphitheater and historic gates at Arlington National Cemetery; the Tidal Basin on the National Mall in DC; Fort Jefferson and the Garden Key Light Station at Dry Tortugas National Park in Florida; Catoctin Mountain Park in Maryland; a few Frank Lloyd Wright Homes in Wisconsin; and the National Air and Space Museum in DC to name a few. There have been more, but the list is very long in my two years with the Park Service. For reference, I created over 800 usable large format views for our collection in 2017 alone. It's been busy. 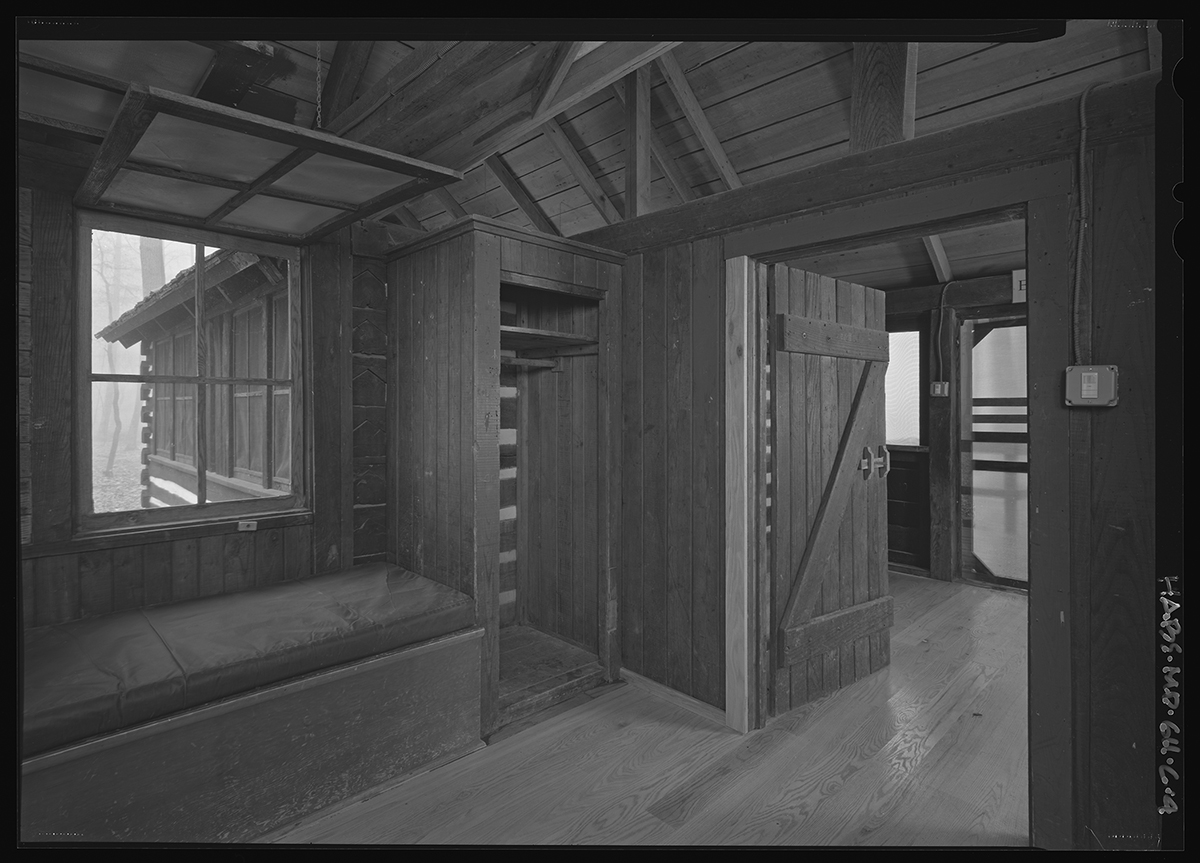 Interior view of a cabin at Camp Greentop of Catoctin Mountain Park in Maryland.

How much do you photograph of a particular location?

For each project, the number of views I create is determined by the agreement drafted between our office and the entity asking for the documentation. The number chosen is what both parties believe to be a suitable number of views to properly document the subject matter. 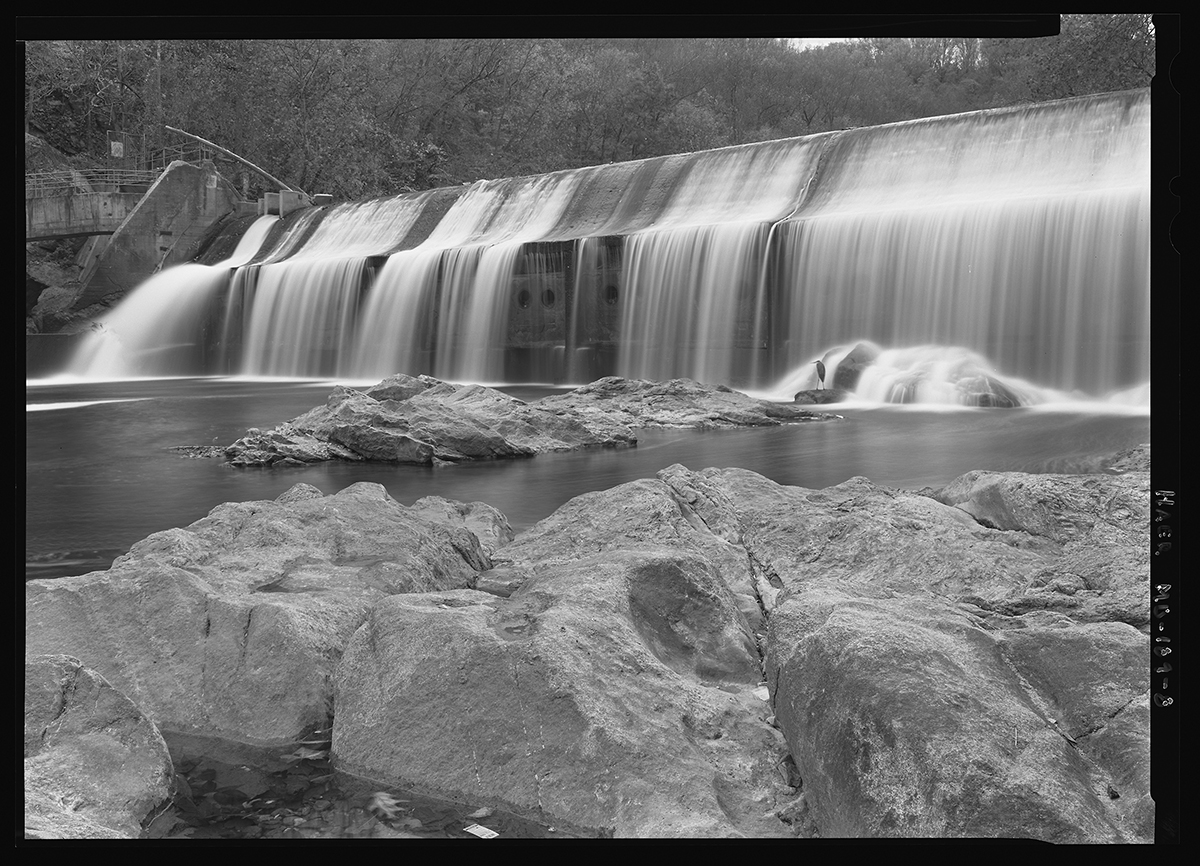 A long exposure of the Bloede Dam on Maryland's Patapsco River. The dam is set for removal in the fall of 2018 as part of a habitat restoration project.

How much time do you spend in a place before you start shooting it?

The amount of time I spend in a location before I start shooting varies. If I arrive at a location and the light is just right for the exterior imagery, I'll immediately pull out the camera and get to work. I only have a set period of time to complete the documentation so I need to seize every opportunity that presents itself while I'm on location. Sadly, opportunities sometimes never present themselves and I need to make the most of what light I have. With interior photographs, I'll typically walk through a location and get a feel for how the light interacts with space and make a list or mental notes of shots that need to take place at certain times of the day. Because I'm using electronic flash in conjunction with the zone system approach to photography I feel comfortable making interior images at any time over the course of the day while I'm using black and white negative film. If I'm using color transparency film, I need to be much more time critical with my exposures due to the technical limitations associated with the color process. 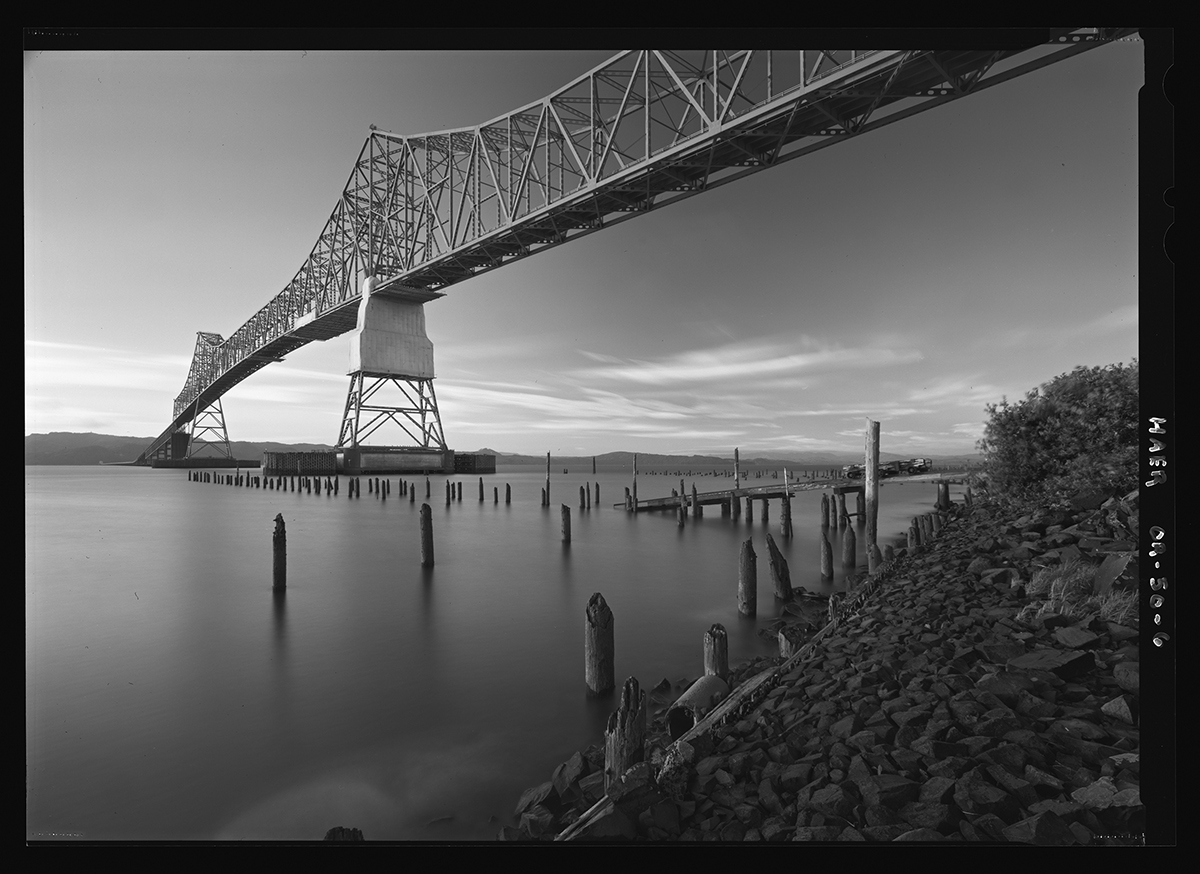 West face of the Astoria-Megler bridge spanning the Columbia River viewed from Astoria, OR.

What do you intend to photograph in the future?

I really have no idea what I'll be shooting in the future other than what's already been planned for the fiscal year. That's part of the excitement surrounding this position. You never know what's next and you need to be ready to solve problems unique to locations you've not had time to properly scout. In this position, you need to have a firm grip on photographic principles and practices so that the entire process becomes an extension of your being. You need to be able to recognize a situation and apply different approaches to achieve the desired results. 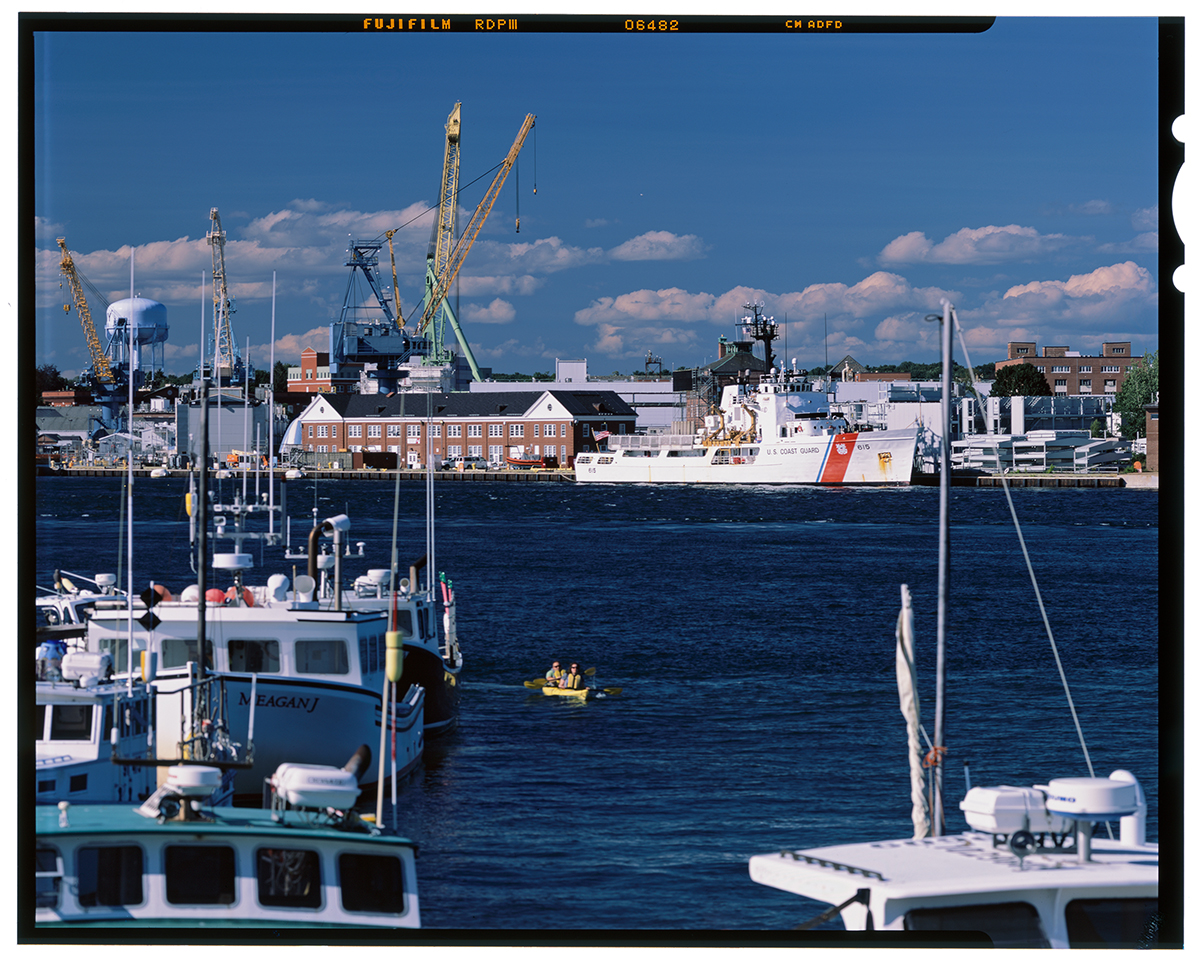 A United States Coast Guard 210 Reliance Class Cutter in port at the Portsmouth Naval Yard in Kittery, ME.

What type of equipment do you use?

The equipment I'm using to complete the projects at hand are as follows: Either a 5×7 Canham View Camera or a 5×7 Linhof Kardan View Camera with a variety of different lenses ranging between 65mm (for 4×5 color) and 480mm. My favorite lens is a Schneider Wide Angle 120mm f/8 Super-Angulon Copal 0 lens. I use a variety of different filters for the lenses. For black and white photography I'm rarely without some sort of yellow filter to help increase contrast and for color transparency, I always use the 105mm Landscape Polarizer (warming) and a variety of different graduated neutral density filters when necessary. 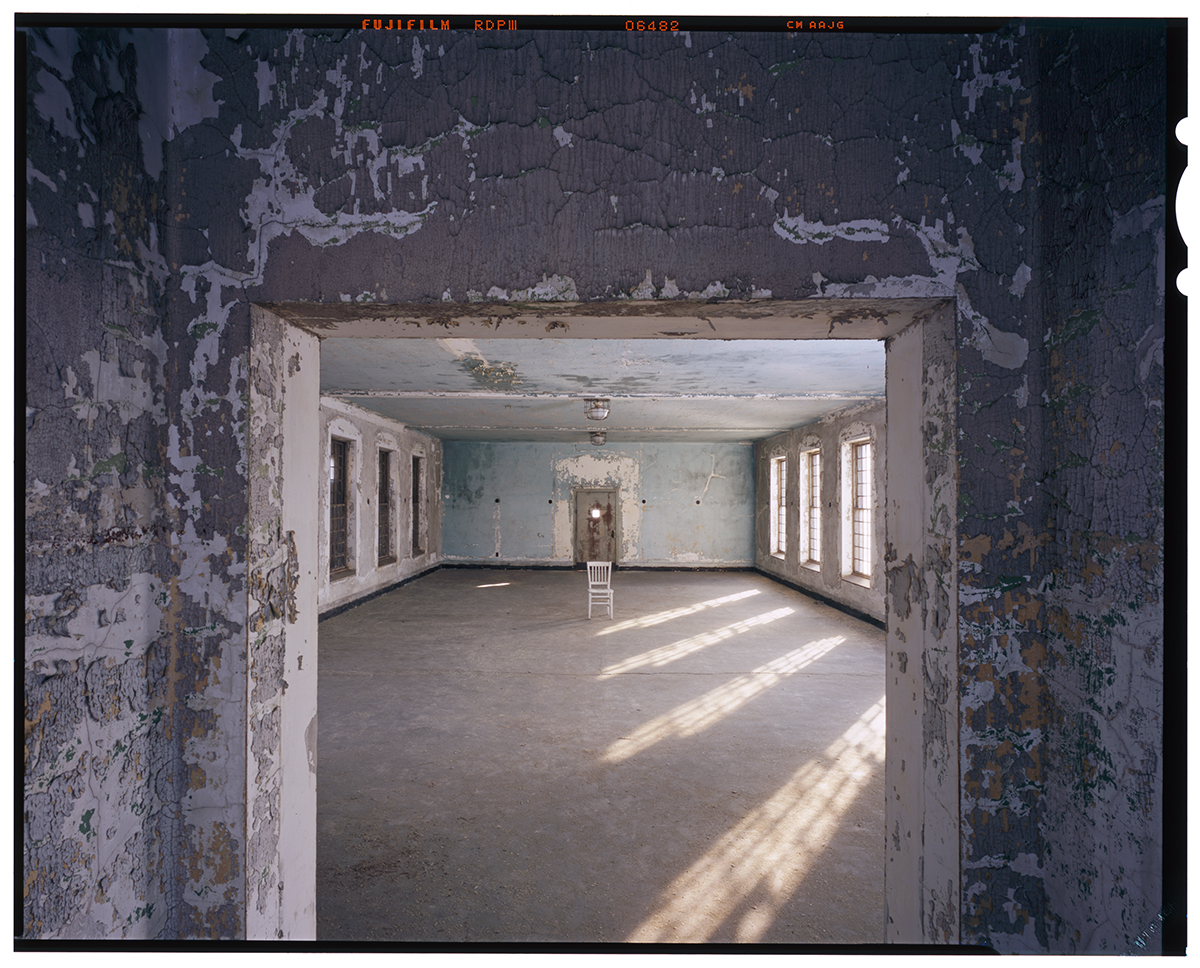 What is a dream shot that you're eager to photograph?

As far as dream shots are considered, I've honestly never given it much thought. I don't really think of images as singular things. I think of photography as a collective group of images. In that context, I have a few dream projects that I would love to happen. One would be an architectural study of the Washington National Cathedral in DC; another would be a large format architectural study of Machu Picchu and the Great Pyramids of Giza showing the similarities and unique differences in their construction as well as completing stunning contextual views; and last but not least, I'd really enjoy doing a color photographic record of every species of trout and salmon in North America as well as the environments from which they came. 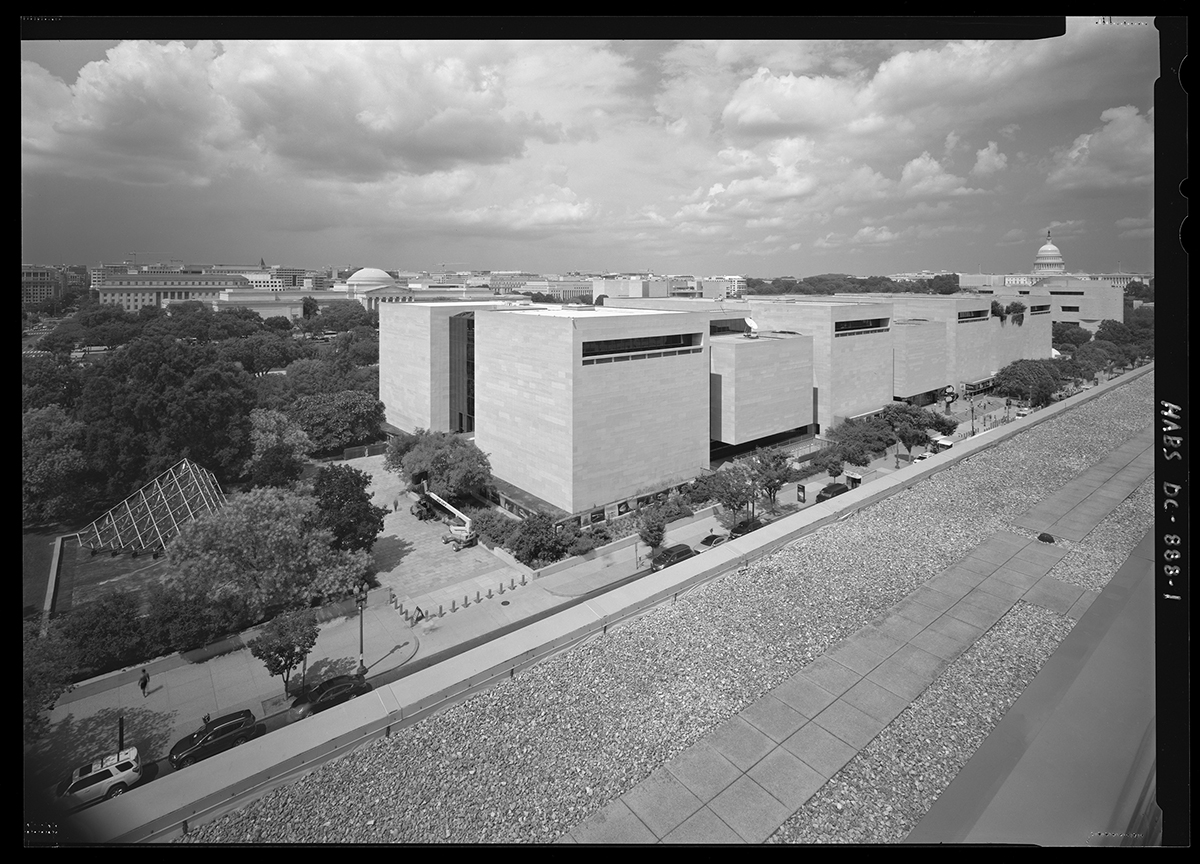 My Modern Met granted permission to use photos and captions by Jarob J. Ortiz.

Wish you had Jarob's job? Share
Like My Modern Met on Facebook
Get Our Weekly Newsletter
Become a
My Modern Met Member
As a member, you'll join us in our effort to support the arts.
Become a Member
Explore member benefits 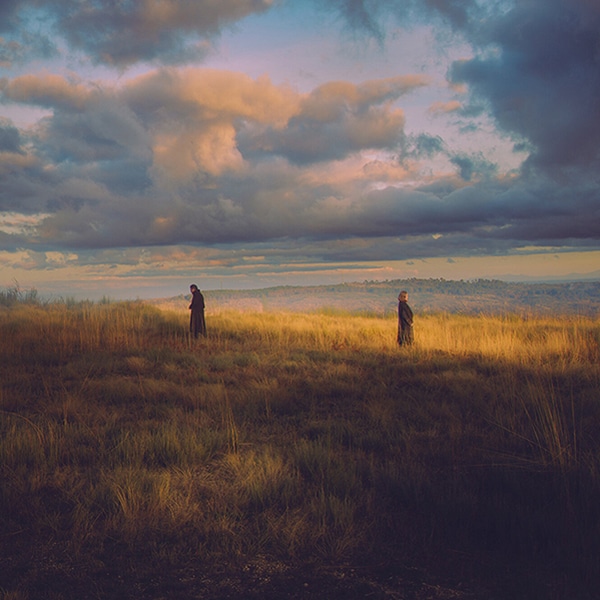 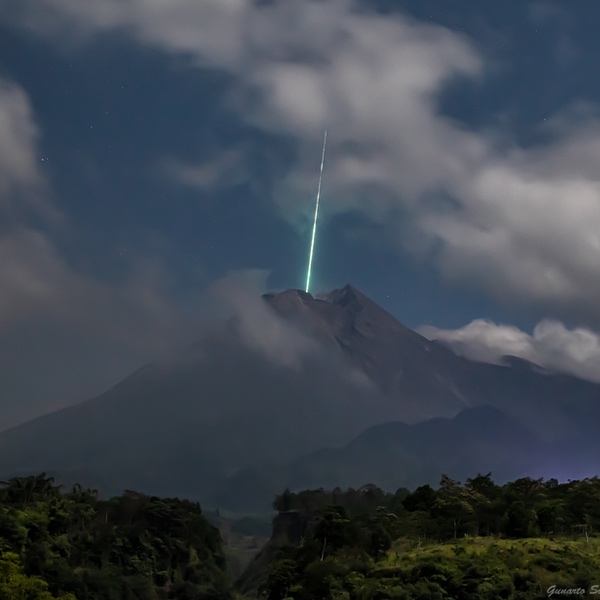 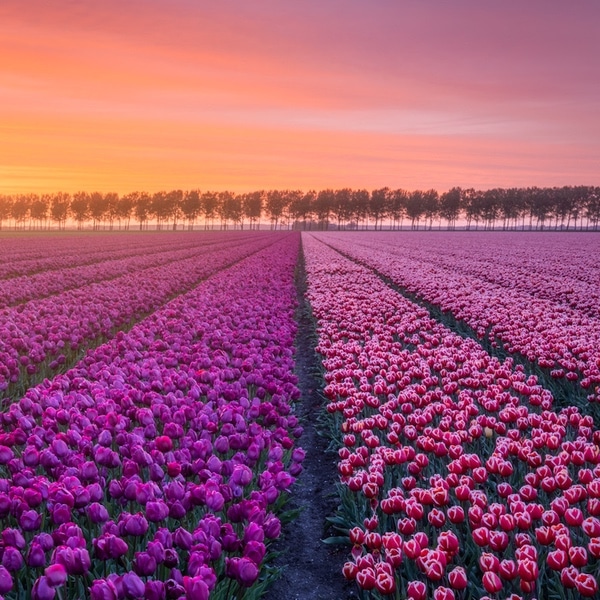