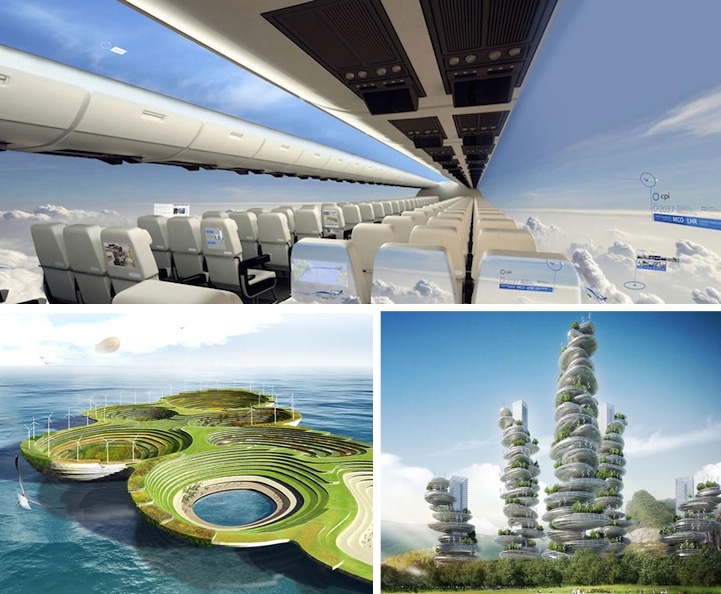 This post is sponsored by JetBlue.  JetBlue is purchasing carbon offsets, and encouraging customers and TrueBlue members to purchase carbon offsets for their own future travel. The city whose TrueBlue members donate the most TrueBlue points to CarbonFund.org via JetBlue.com/donate in May will receive a new green space to help breathe new life into their community.

In the future, what will our world look like? Where will we live, eat, sleep and work? If you ask the creators behind these futuristic designs, you'll be surprised by their answers. According to the United Nations (UN), while 54% of the world's population currently lives in urban areas, that number is going to increase to an incredible 66% by 2050. In fact, the UN projects that urbanization combined with world population growth will add another 2.5 billion people to urban populations by 2050. With that being said, where will all these people live?

In this ever-crowded world, JetBlue wants to do its part in helping the environment. In the airline’s “One Thing That’s Green” campaign, it aims to raise awareness of its efforts in offsetting CO2e emissions. When JetBlue flies airplanes, greenhouse gases such as CO2 are released into the air, and though JetBlue can’t capture the same CO2 that’s emitted from its planes, it can capture other equally impactful greenhouse gases elsewhere. JetBlue’s goal is to reduce the total amount of harmful greenhouse gases in the environment, thus slowing the effects of climate change. The airline has already offset over 350 million pounds of CO2e and is working with and purchasing carbon offsets from CarbonFund.org to protect nearly 500,000 acres of endangered rainforest in Brazil.

The Amazon Tropical Rainforest Conservation Project will preserve habitat for an extraordinary amount of biodiversity — one to two million animal species live in the Amazon Basin, including freshwater dolphins, howler monkeys and scarlet macaws. The Basin also provides habitat for up to 30,000 endemic plant species. 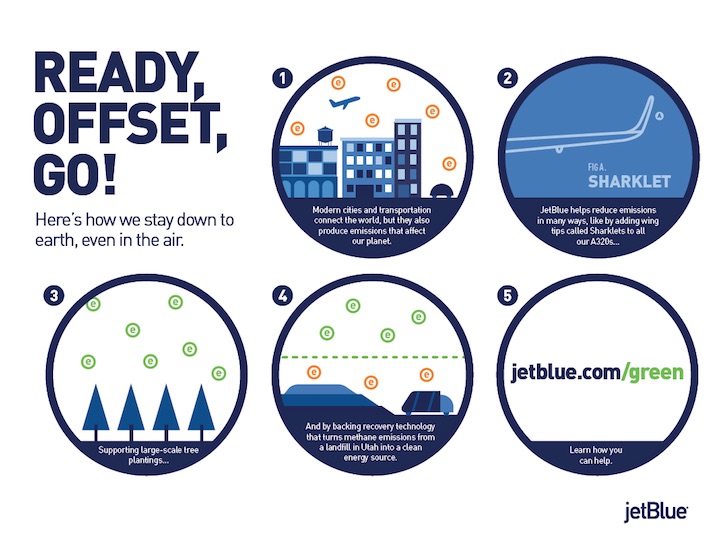 Today, we'll take a look at ten design concepts that are also trying to make the world a better place. Though some of these ideas may not come to fruition until years or even decades from now, they give us an exciting peek into the possibilities that lie in our collective future. 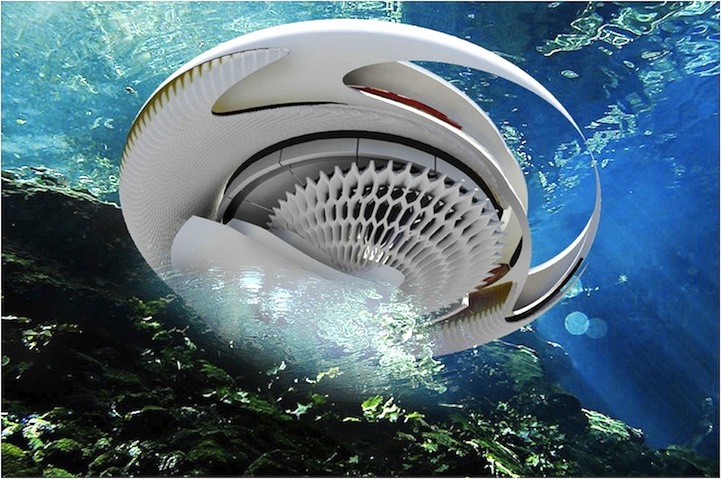 In the future, can you imagine a house powered solely by ocean waves? Designer and architect Margot Krasojević is behind Hydroelectric Tidal House, a futuristic home concept that harnesses tidal wave power to generate electricity. The structure is made up of two shells, an outer one and an inner one. The outer shell, cast in concrete, contains solar cells that provide an electrical supply to the living area. Its cross section is made of hydraulic turbines, which generate electricity from tidal waves. The inner shell, made of lightweight aluminum, rises and falls with the changing tide. It grounds the outer shell, acting like an anchor. The outer shell is more flexible, responding to the movement of the hydraulic turbines’ pistons. Tidal waves, as an energy source, have not yet fully been researched in relation to self-sustaining homes. However, the architect believes that they are more “efficient” and that they can work symbiotically with wind and solar energy. 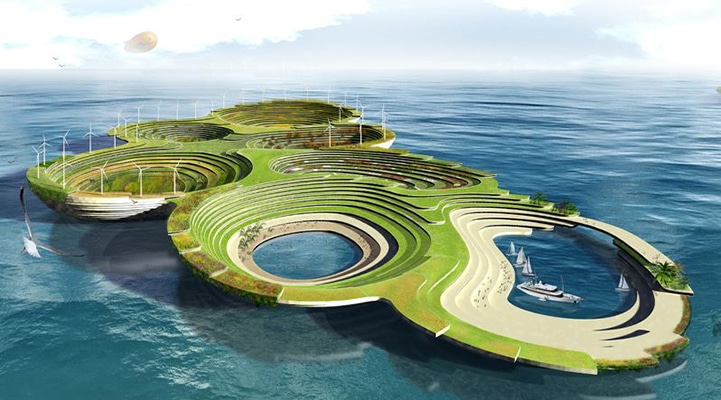 What would happen if a catastrophic natural disaster was about to hit or warfare was about to ravage a country? Serbia-based Aleksandar Joksimovic and Jelena Nikolic believe we could all retreat to a self-sustaining city that floats on water. Called Noah's Ark, the proposed concept, which won an honorable mention in Evolvo's 2012 Skyscraper Competition, could hold all living species from humans and animals to plants and trees. Flexible cables would connect the island to the ocean's floor, providing stability, and external walls, as tall as 210 feet, and would protect the island from harsh sea winds and tsunamis. Underneath the island, giant turbines would convert ocean currents to energy. As a livable space, the Ark would hold homes, offices, recreational areas, parks, forests and beaches.

3. Aircraft That Links to Train-Like Pods

How would travel be different if you could merge train-like pods with an aircraft? The Horizon System, by award-winning design consultancy Studio Globe, reimagines our transportation system by giving us a glimpse into what a smooth and seamless transition from ground to air would look like. At passengers' local SkyStation, one would embark on a SkyLink pod. They'd be whisked away to an airstrip where a pod would hook up to a SkyShip. Interestingly, the pods would not just carry passengers and their luggage; they'd also bring in the fuel for the aircraft. That way, the aircraft never has to land. As the group states, “If an aircraft never needs to land, its wings can be optimized specifically for flight. This can increase efficiency.” 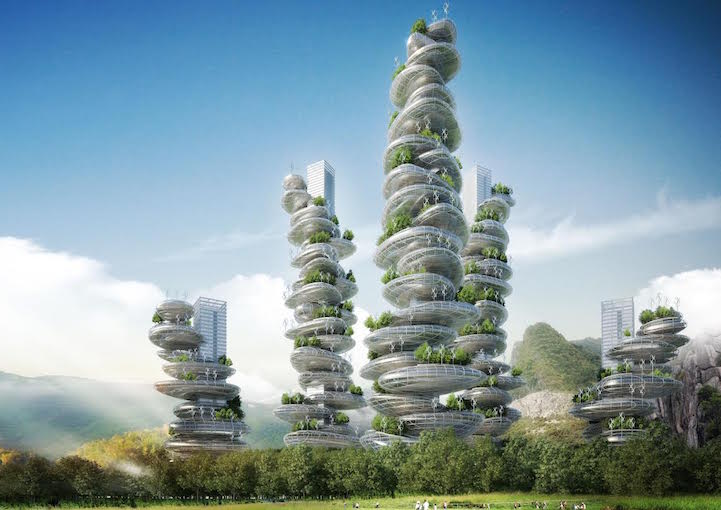 Belgian-based Vincent Callebau Architectures believe Shenzhen's cityscape can be transformed by replacing skyscrapers with farmscrapers, or vertical farming towers. Called Asian Cairns, the design is inspired by nature or more specifically a cairn, a man-made pile of stones used as trail markers. Each “pebble” consists of a different area – from homes, offices, concert halls and shopping centers to garden and agricultural sites. The project hopes to help with the growing urban population while also increasing energy production by creating an environment that produces more energy than it consumes. This is achieved by wind turbines, solar cells and ample vegetation. In Asian Cairns, Vincent Callebaut Architectures believes this could be the new model of a smart city. 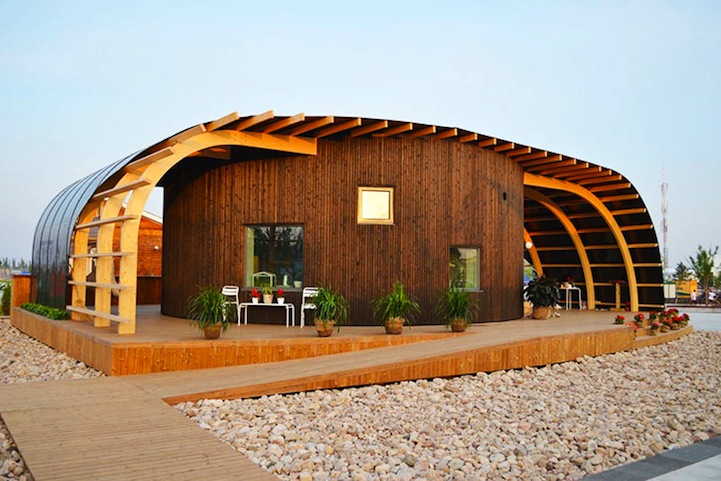 While a solar powered house isn't something new, make it sustainable and modular and you now have our attention. Halo, which was designed by more than 40 university students under the name Team Sweden, is a sustainable living concept that is powered entirely by the sun. Ninety-five percent of the construction materials consist of renewable wood. Halo is composed of more than 30 isolated modules with each module designed to fit seamlessly with the next. The whole roof is composed of solar cells that provide the energy for the home. As the group states, “Our innovative way of integrating solar cells on the roof of this unique house, we hope, will help give solar energy a better image and promote the development of solar technology by demonstrating what is possible even today.” 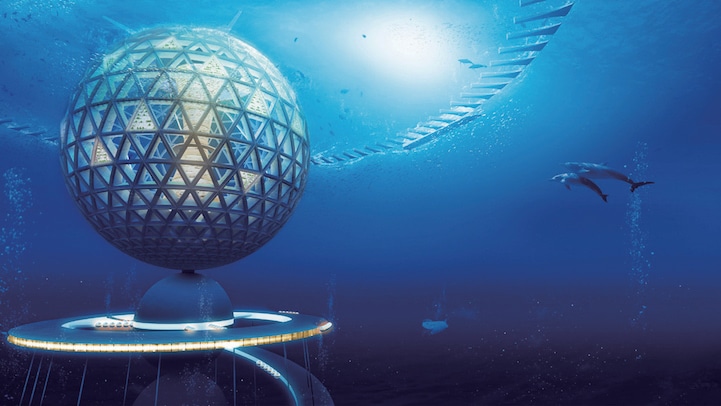 Ocean Spiral, proposed by Shimizu Corporation, is a $25 billion concept project that imagines a self-sustaining city underwater. It aims to capitalize on the enormous potential of the deep sea by linking together, vertically, the air, sea surface, deep sea and sea floor. Housing a permanent population of 5,000, the concept consists of a massive glass dome called Blue Garden that measures 500 meters in diameter, a giant spiral that harnesses the power generated by the earth, and a deep sea area called Earth Factory where carbon dioxide would be stored and where deep sea resources would be developed and cultivated. The structure would be designed so that it's minimally affected by temperature changes and shielded from natural disasters like typhoons and earthquakes. “This is a real goal, not a pipe dream,” spokesperson Hideo Imamura told The Guardian “The Astro Boy cartoon character had a mobile phone long before they were actually invented—in the same way, the technology and know-how we need for this project will become available.” 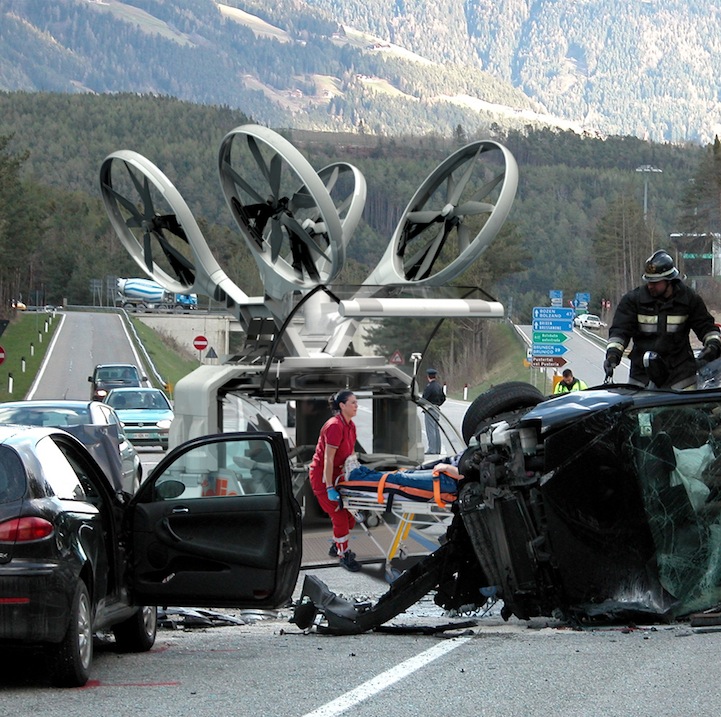 When Fast Company asked the question, “What one thing in the health care industry desperately needs to be redesigned, and how would you redesign it?” design firm argodesign answered back with a wildly innovative answer, a drone ambulance. In emergencies, seconds matters, and with traffic jams plaguing crowded cities, it can take a four-wheeled ambulance forever to reach a patient. Argodesign's solution is a one-person ambulance drone that can land almost anywhere. It would carry a single EMT to the scene, who would stabilize the patient, load him up and send him to the hospital for treatment. When we asked how far away we are from seeing this design becoming a reality, Co-founder and Chief Creative Officer of argodesign Mark Rolston told us, “We can easily imagine something like our drone ambulance becoming a reality within the next couple of years.” Ultimately, the company hopes that the ambulance drone will be able to save the thousands of lives lost each year due to slow emergency response times. “It’s basic product innovation: Faster, cheaper, better,” said Rolston. 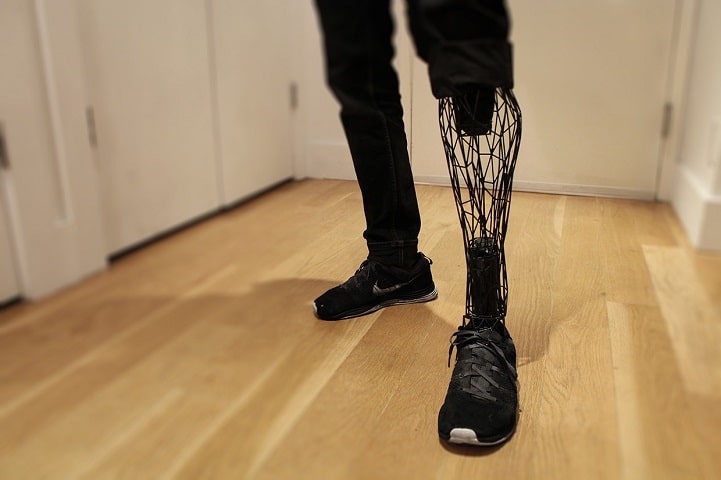 In a few short years, 3D printing has come a long way. Industrial designer William Root proves this point with Exo-Prosthetic, a modern prosthesis made by 3D printing. Getting a traditional prosthetic limb can be time consuming and very expensive. With Exo-Prosthetic, Root uses modern technologies to streamline the prosthetic manufacturing process. He uses a combination of a 3D scanner, a 3D printer, and a complex 3D modeling software to create a more precise, customizable and affordable prosthesis. The finished model, which resembles a web-like exoskeleton, is printed out of titanium. Not only is it cheaper and more customized, the finished product is also aesthetically pleasing. As Root said, “One of the biggest complaints amputees have with their prosthetic limbs is their appearance. Traditional prostheses have very robotic and mechanical forms by nature. By using 3D printing, I was given much more freedom in the form. The most important aesthetic aspect is that it watches the wearer’s physique. This helps in creating a much more natural and appropriate looking limb, one which fits into clothes properly and which really helps the wearer psychologically by recreating the form of the missing limb.”

While jumping into a high speed capsule that gets pushed through a series of tubes stretching thousands of miles may seem like a far fetched dream, it will soon become a reality. Hyperloop was only an idea by Tesla Motors founder Elon Musk a few years ago. Now, the feasibility studies have been done and Hyperloop is entering the testing phase. The high-speed transportation system consists of pressurized capsules that ride on an air cushion through a continuous, sealed steel tube. The conceptual route runs from Los Angeles to San Francisco, paralleling Interstate 5. The expected journey time for the 354-mile route is only 35 minutes due to its fast speed of about 600 mph. This would be only half the time it takes on a plane. Capsules carrying six to eight people would depart every 30 seconds and tickets would cost about $20 each way. Musk puts the price tag of this project around $6.2 billion, which seems astronomical but not compared to a high-speed rail system in California, which would cost nearly 10 times as much.

Imagine being on a plane without any windows! Windowless Fuselage is a concept by UK-based tech innovation company Centre for Process Innovation (CPI) that replaces windows on commercial planes with high-definition, flexible display screen panels. The panels can be used to show you views from around the aircraft, thanks to cameras mounted on the exterior of the plane, or can act as lighting panels, producing color changes associated with sunsets and sunrises. By eliminating the weight of material that would normally reinforce the windows, fuel usage would decrease, which in turn would reduce CO2 emissions into the atmosphere. How soon could windowless planes becoming a reality? “We anticipate that large area, flexible OLED displays will be commercially viable in the next decade,” CPI said. “However, the commercial aviation industry’s design timeframe operates across a twenty-year cycle so a windowless fuselage would be possible by 2035 at the earliest.”