Incredible Bodypainting of a Chameleon Consists of Two Women 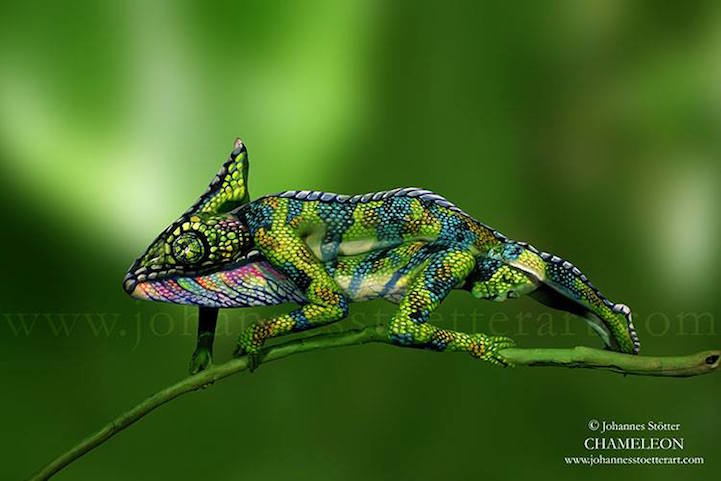 You must watch this video! Artist Johannes Sttter just came out with another incredible bodypainting. This human chameleon consists of, not just one person, but two people lying on top of each other. While it's easy to spot the first woman, the second one will leave you scratching your head. As you may recall, Sttter is the artist behind that unbelievable bodypainting of a parrot we showed you about a year ago, as well as that amazing bodypainting of a frog. This is his third creation under his animal illusion series.

While a photo of this chameleon is stunning, in and of itself, watch the video to be really shocked. The colorful creature comes alive! Slowly the “chameleon's” arms move and then a leg unbends. Finally, the woman on top steps off the camera to the right, and the woman on the bottom makes her exit towards the left.

According to WB Productions, Sttter worked for four hours to design the piece and the bodypainting took six hours with the help of an assistant. The models' hair were covered in natural clay to make their heads appear bald. “The models were two sisters, friends of mine,” he said. “They were very happy to model for this motive. I am also very happy, it is kind of magic, especially the colors. Most people who already saw it say that the chameleon is even better than the frog and the parrot.”