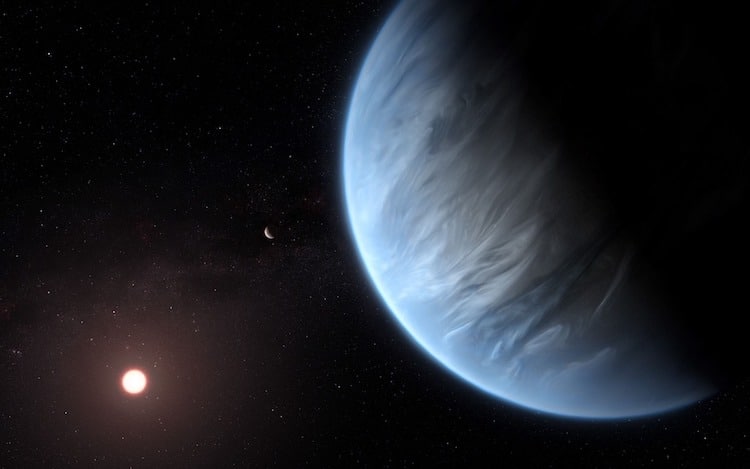 In the race to find a habitable planet, astronomers from University College London have made a breakthrough. For the first time ever, water has been detected on an exoplanet, one that has been called a potential “super-Earth.” Located 110 light years away, K2-18b is an exoplanet that is twice the size and has eight times the mass of Earth. With temperatures and water that could support life, now is the time to learn more about this intriguing celestial body.

So what do we know about K2-18b? Discovered in 2015, it's located in the Leo constellation and orbits cool dwarf star K2-18 every 33 days. K2-18b is located in the habitable zone of the red dwarf star. This means that it's within the region where the star's atmospheric pressure could support liquid water on its surface. The detection of water in its atmosphere is a first for an exoplanet located in a habitable zone. In fact, while K2-18b has a companion planet, it's located closer to the star and so most likely has temperatures too high to support life.

The team came to their conclusions by analyzing data captured by the ESA/NASA Hubble Space Telescope in 2016 and 2017. They created an algorithm that examined the starlight filtered through the exoplanet's atmosphere and discovered molecular traces of water vapor. The results also showed the presence of hydrogen and helium. Further studies will determine cloud cover and how much atmospheric water is present on K2-18b.

But before you pack your bags and start dreaming of life outside our solar system, there's something to consider. K2-18b's red dwarf star is very active, which means that there's likely a good deal of radiation. However, it's fair to say that this won't be the last interesting discovery when it comes to exoplanets. K2-18b is just one of hundreds of “super-Earths” discovered by NASA's Kepler spacecraft. Their new TESS mission promises to reveal even more in the coming years.

“With so many new super-Earths expected to be found over the next couple of decades, it is likely that this is the first discovery of many potentially habitable planets,” shares study co-author Dr. Ingo Waldmann. “This is not only because super-Earths like K2-18b are the most common planets in our Galaxy, but also because red dwarfs—stars smaller than our Sun—are the most common stars.”

So while we might not be able to live there, learning more about K2-18b and the composition of other exoplanets helps us have a better understanding of Earth's place in the cosmos.

“Finding water in a potentially habitable world other than Earth is incredibly exciting. K2-18b is not ‘Earth 2.0’ as it is significantly heavier and has a different atmospheric composition,” explains lead author Dr. Angelos Tsiaras of the UCL Centre for Space Exochemistry Data. “However, it brings us closer to answering the fundamental question: Is the Earth unique?”