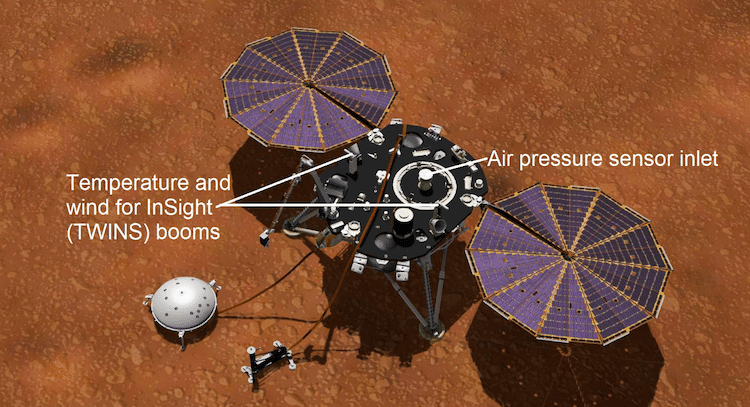 NASA's InSight Lander has been on Mars for just a few months, but it's already making a big impact. Using cutting-edge instruments, it's able to act like a Martian meteorologist, beaming back a weather report from the Red Planet. Wonder what the weather's like right now on Mars? Bundle up tight. If you thought it was cold where you are, you haven't experienced winter on Mars.

InSight is currently parked just north of the Martian equator, so it's experiencing winter. According to NASA's new daily weather report from Mars, you'd need much more than a sweater and some mittens to survive. Since February 14, the daily average temperature has hovered around -83 °F (-63.8°C), with an average daily high of just 6.5 °F (-14 °C).

It takes a few days for data from any given sol—Mars solar day—to be downloaded, so there's a bit of a delay and figures may change slightly as better information becomes available. Mars' winter season tends to be quite stormy, and InSight is providing a wealth of new information thanks to its continuous data collection. Previously, surface missions only collected data for a few hours at a time, making InSight's work much more comprehensive.

Mars' coldest temperatures—as low as -140 °F (-95.5 °C)—usually occur around 5 am. From that point, the Martian sun begins to heat up the planet's surface. While scientists have been surprised by evidence of low-pressure, tornado-like “dust devils” that are so large they actually shake the lander, overall the pressure waves that signal weather on Mars are more stable than you'd think.

“High and low pressure is indicative of the weather systems,” says Don Banfield, a principal research scientist in Cornell University's Department of Astronomy and the mission’s lead for the lander’s Auxiliary Payload Subsystem (APSS). “Compared to Mars, Earth is pretty chaotic. Mars has a nearly perfect, smooth sinusoidal (up and down) waves—it’s a very regular seesaw guided by a metronome on Mars. On Earth, the pressure is guided by a hyperactive child.”

Keep up to date on the latest weather on Mars thanks to information from NASA's InSight Lander.