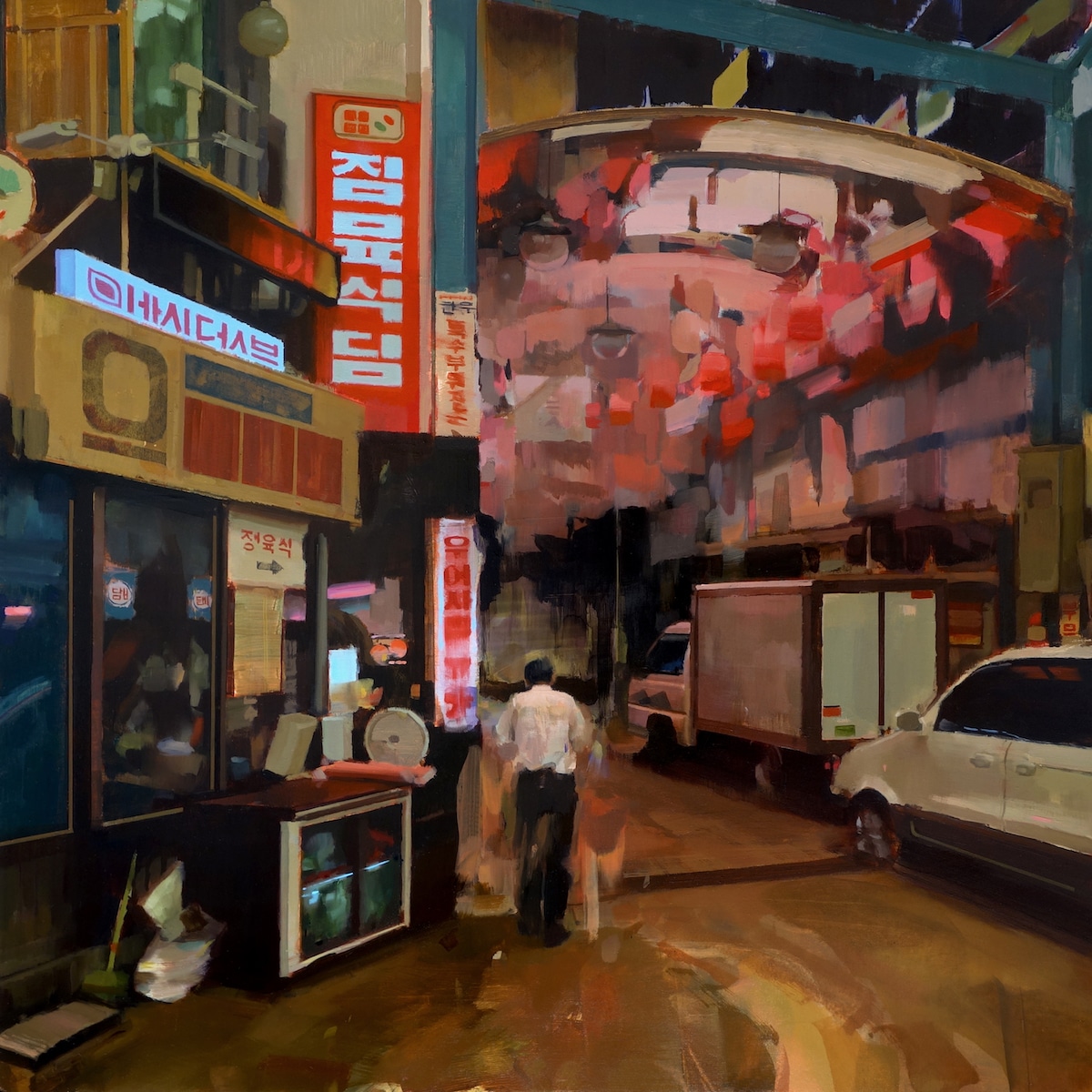 According to the 2010 U.S. Census Bureau, 1.7 million Korean Americans live in the U.S., making up less than 1% of the U.S. population. In a bid to explore the complex issues surrounding cultural identity, Boston-based artist Mike Ryczek visited Seoul, South Korea in 2016 with his partner, a Korean American adoptee.

“My partner is a Korean adoptee and the trip was set in motion when deciding to attend a week-long gathering of Korean adoptees from around the world,” Ryczek tells My Modern Met. “It was my first time out of the U.S. as well as my first time experiencing a drastically different location and culture first-hand. My partner was technically returning home for the first time, but we were exploring a city that was just as foreign to her as it was to me.”

The trip inspired Ryczek to create a series of paintings based on photos the pair had taken in Seoul. The images have been collaged and manipulated, before being translated into paint on canvas. Each slightly surreal, colorful oil painting captures the city’s energy and the culture of the people who live there. “They come from raw sensory impressions of this new environment,” explains Ryczek. “The emotions and ideas I imagined being projected onto it because of my own preconceptions of East Asian culture, and historical / contemporary social issues specific to Korea that I learned about both during and after our stay in Seoul.”

Ryczek has completed 6 paintings from the series so far, but plans to create 20 in time for his solo show at 13Forest Gallery in Arlington, Massachusetts, opening in January 2020.

We recently caught up with Ryczek to ask more about the series and his experience in Seoul. Read on for My Modern Met’s exclusive interview. 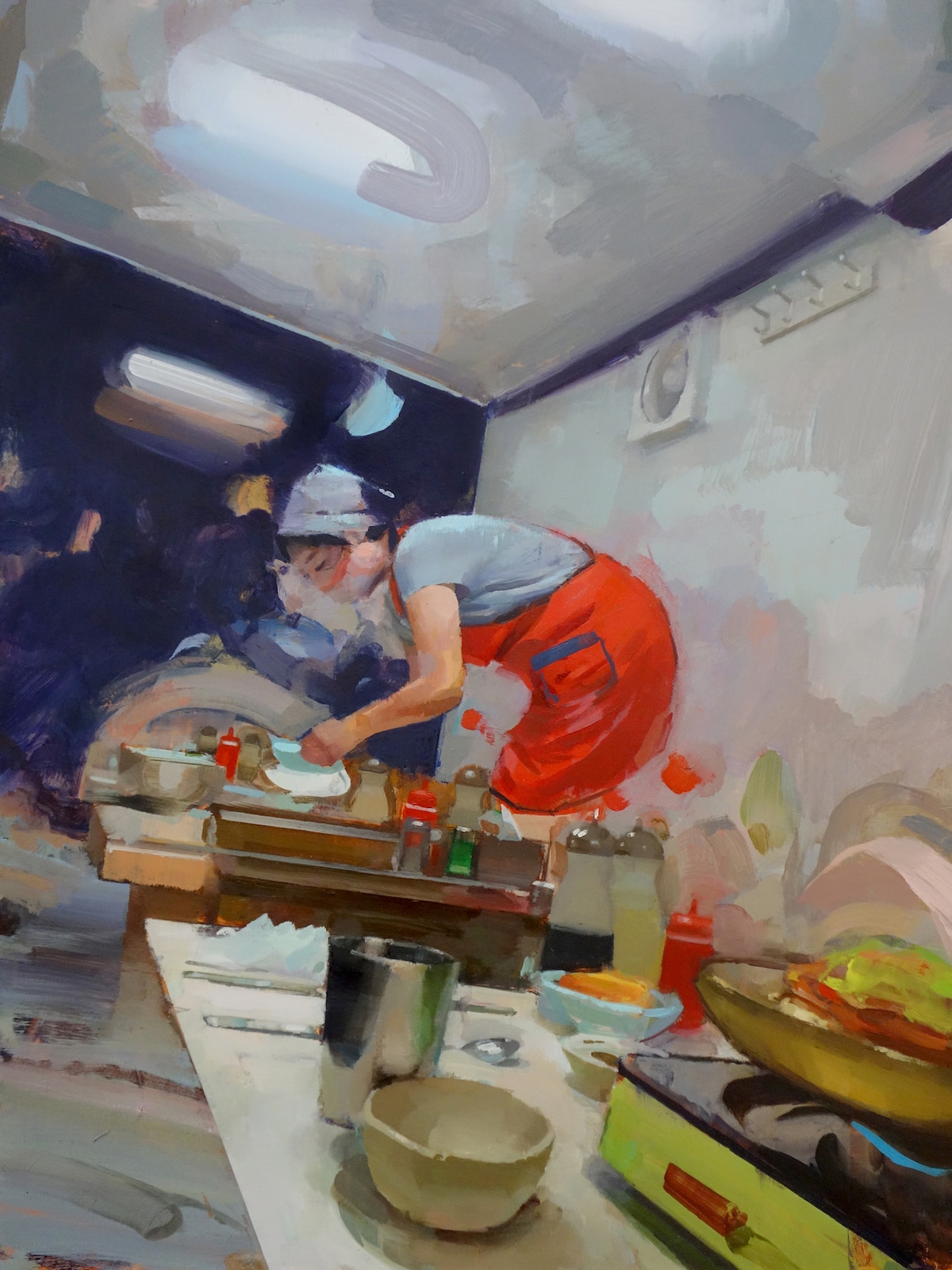 When did you first begin painting?

I technically started painting in 2002 when I was a freshman at Montserrat, but began taking it seriously when working on a series right before graduating. Since 2006, I’ve pretty much stuck exclusively to oil paint as my medium of choice, but am constantly getting on myself to explore other media.

Your partner is a Korean adoptee now living in America. How has her experience influenced your work?

If we’re referencing this body of work specifically, her experience is basically the only reason it exists as I would have never had a reason to visit Korea or to have a particular interest in Korean culture otherwise. Beyond this, I wouldn’t say that her experience as an adoptee has directly affected my work in general. Maybe a heightened sensitivity to respectfully portraying figures in the work because I still see her as being connected to the people of Korea, however distantly.

My partner was adopted at two weeks old so, though interracial adoption and the minority experience are things only she can relate to, we both grew up here and share the same culture. When we made the decision to travel to Seoul, we spent the preceding months taking a crash course on a country that was equally foreign to both of us. The only difference was that she knew she was born there and that it was filled with people that looked like her. So when I made the work, I kind of saw it as a joint project reflecting on a novel shared experience. The photos I used as painting sources were taken by both of us, so they include images I was drawn to but also images she captured that inspired me. 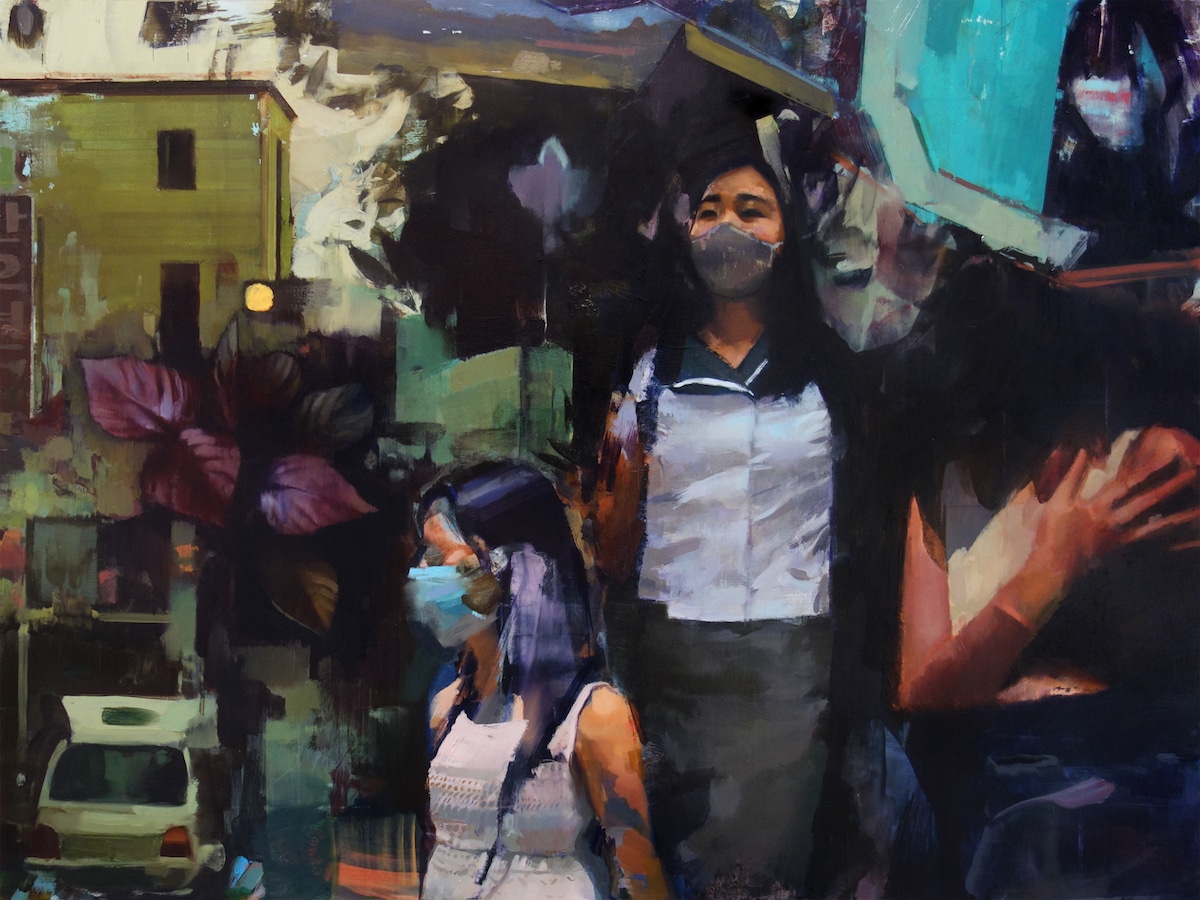 What were your first impressions of Seoul?

When I first arrived in Seoul, I was exhausted from staying awake on the plane to beat the 13 hr time difference and it took at least a day or two to really start processing everything. I’ve actually never travelled outside of the US before, so aside from the culture shock, the mere fact that I was now in a country halfway across the world was very new for me. We got a considerable discount on a stay at the Lotte Hotel in Seoul and many of the events associated with IKAA (International Korean Adoptee Association) took place here, so I actually spent a ton of time in this massive 5 star hotel I’d never typically stay in.

We got there in mid-August so it was insanely hot for the entire stay, which kind of puts you in a daze while you’re taking everything in. The architectural design in the city is fantastic—sleek and innovative, high concept buildings everywhere. Korea, like Japan, loves the cute “Kawaii” aesthetic (“Aegyo” in Korea) so these types of colorful characters are everywhere and on everything, from pencil cases to street signs. When getting from place to place, you’re surrounded by beauty advertisements inundating you with the same sickly thin, doe-eyed, pale K-Pop fueled beauty ideals. The frequency of plastic surgery advertisements targeting teenagers jumped out at me immediately. I later learned that Korean women have actually been trying to have these banned in the subway as they are considered obtrusive and unhealthy for young women.

This was also the first time I would be considered a minority as Korea is largely monoracial. I immediately spotted any Caucasians in the crowd and, while I certainly didn’t feel unwelcome, was acutely aware of standing out as a bald white guy tourist.

In terms of my experiences with Korean locals, I didn’t have many extensive interactions with people outside of our group – just social pleasantries using the 2 greetings I remembered. I read a lot about Koreans being xenophobic, but I never experienced any obvious prejudice—a few people were kind and most were indifferent. 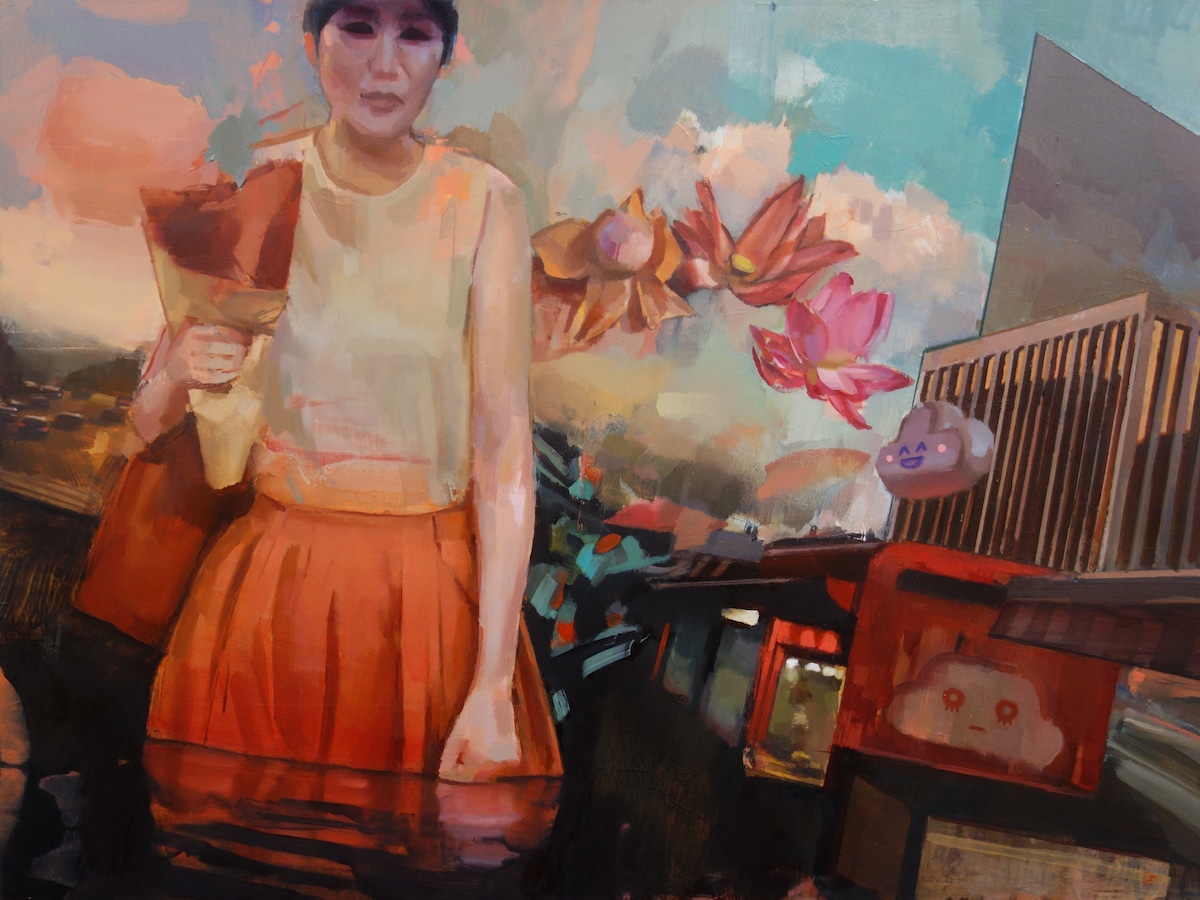 What did you learn from the trip?

I stayed in Seoul for a week and a half and the first week was a whirlwind of food tours, museum visits and other events, so I feel like I learned very little of what it is to actually live in Seoul. I was clearly visually inspired by the trip, and I think that the last year of working on these pieces was when I was actually able to meditate on my experience and learn more about places I visited and things that were unseen to me during the trip.

I did learn quite a bit about the varying individual experiences of being a Korean adoptee through personal interactions, talks, and film screenings. I see this as separate from my interpretation of the city itself, however, and I’m not attempting to examine the adoptee experience in my work as I don’t feel qualified to comment on it.

In terms of stray observations about the city, Seoul is much like any other densely populated city in that it shares problems like pollution, social strife, social isolation, and worship of materialism. There is a lot of beauty to be found and there is also plenty of darkness. My painting Decline and Fall touches on lax labor laws that lead to overworking and death, Perilla is touching on women’s rights activism in Korea as well as health hazards from their exceptionally poor air quality, Soft Power playfully addresses authorities using cuteness to prevent social dissent. The year we went was actually the year the first female president was impeached for a scandal. I tried to include all of these angles in the work and never dwell on just one aspect. 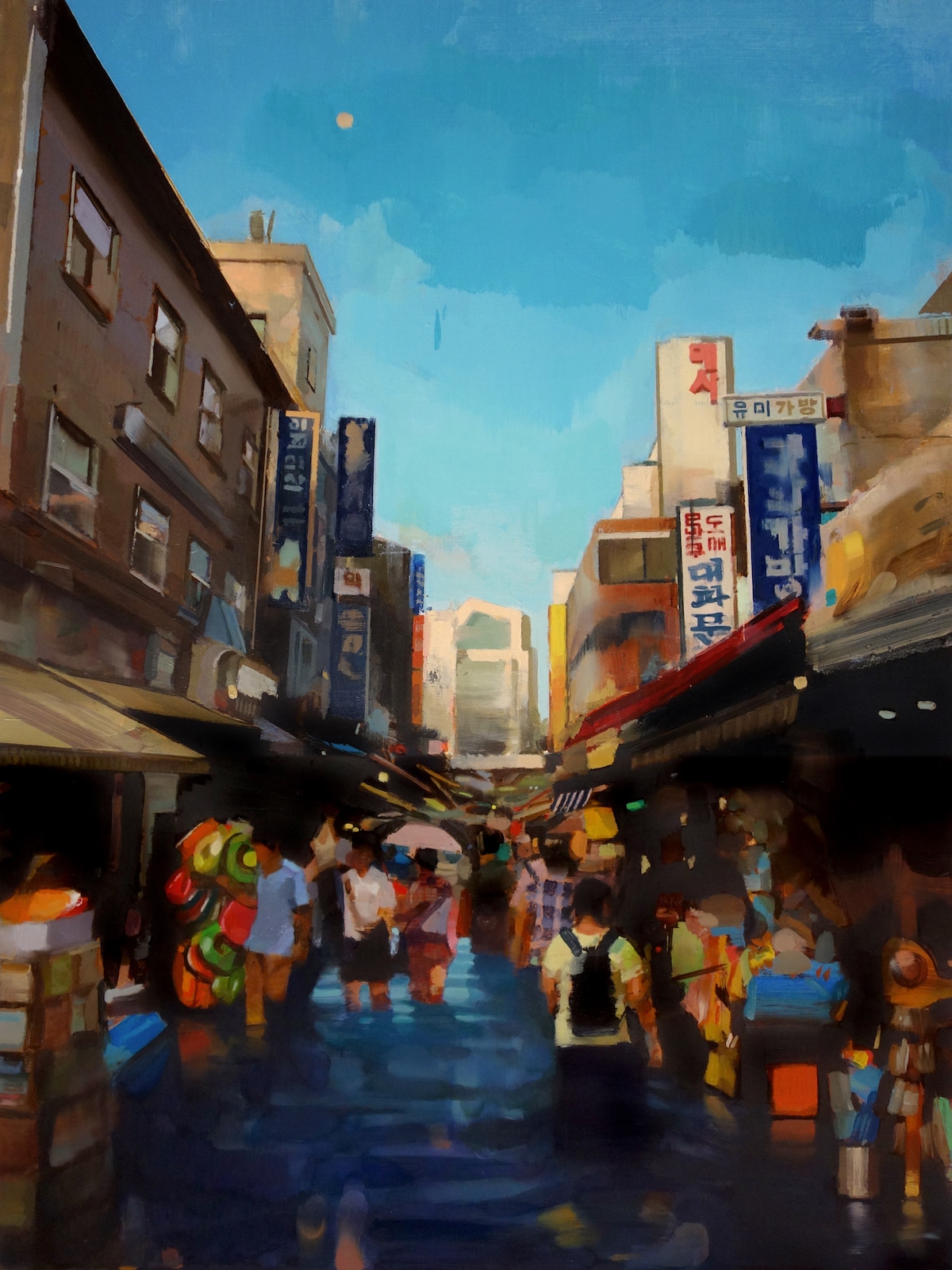 Your work has a sense of realism and surrealism. How did you come to develop this style?

It’s hard to say exactly how I got to painting things the way I do. I’ve always loved both of these styles in painting, but I never felt fully committed to either. They were both revolutionary for their respective times, but I’ve always felt so much Realist work was too conceptually dull and so much Surrealist work was too flat and poorly painted. It’s the same for representational and abstract painting – I love elements of both but would never want to pursue one or the other for my own work. I do my best to try and avoid overthinking these things.

There is definitely something thrilling about seeing an impossible scene painted in a realistic way, or handling a recognizable scene from everyday life in a dreamlike manner – exaggerating what’s visually perceived to find magic in the real and make it more than it initially appears to be. I try to paint in a way that suggests light and form but obscure it in some way so the viewer has to piece that information back together, drawing on their own well of visual associations and memories. Emotion and atmosphere in imagery have always been my dominant concerns, and I paint in order to express those things as clearly as I can.

After I finish the Korea series, I plan to start working on a group of paintings dealing with the concept of supernormal stimulus and the cycle of addiction. Also, over the past 4 years, I’ve been working on another series based on still images from the four Jaws movies I had a childhood obsession with. I’m hoping to complete the series and exhibit them together in the next year or so. 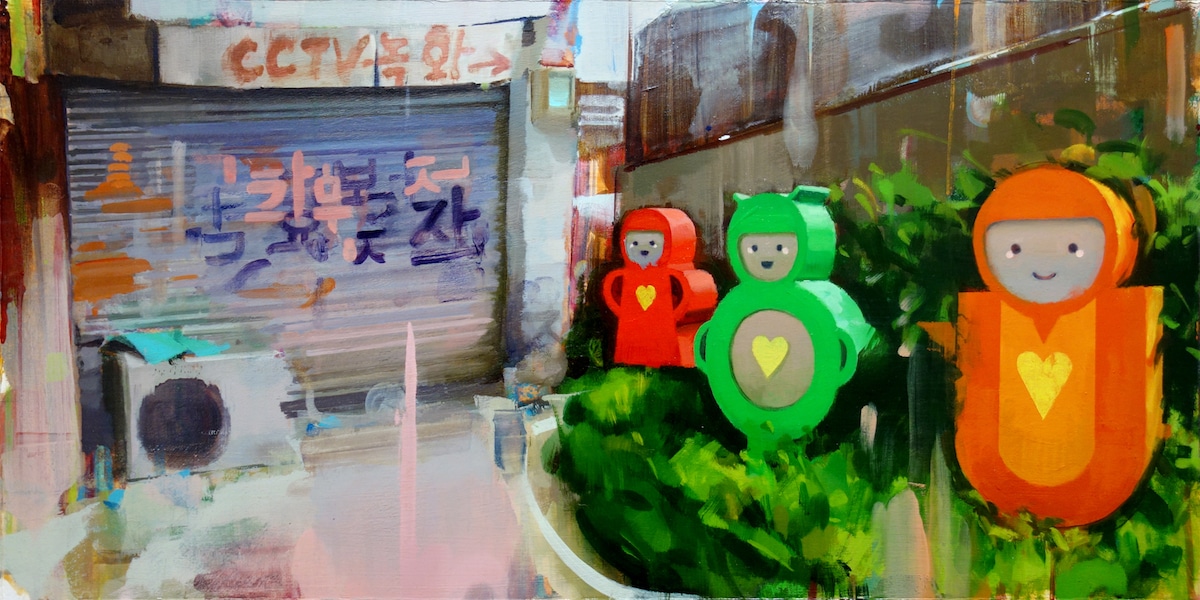 Like this series? Share
Like My Modern Met on Facebook
Get Our Weekly Newsletter
Become a
My Modern Met Member
As a member, you'll join us in our effort to support the arts.
Become a Member
Explore member benefits