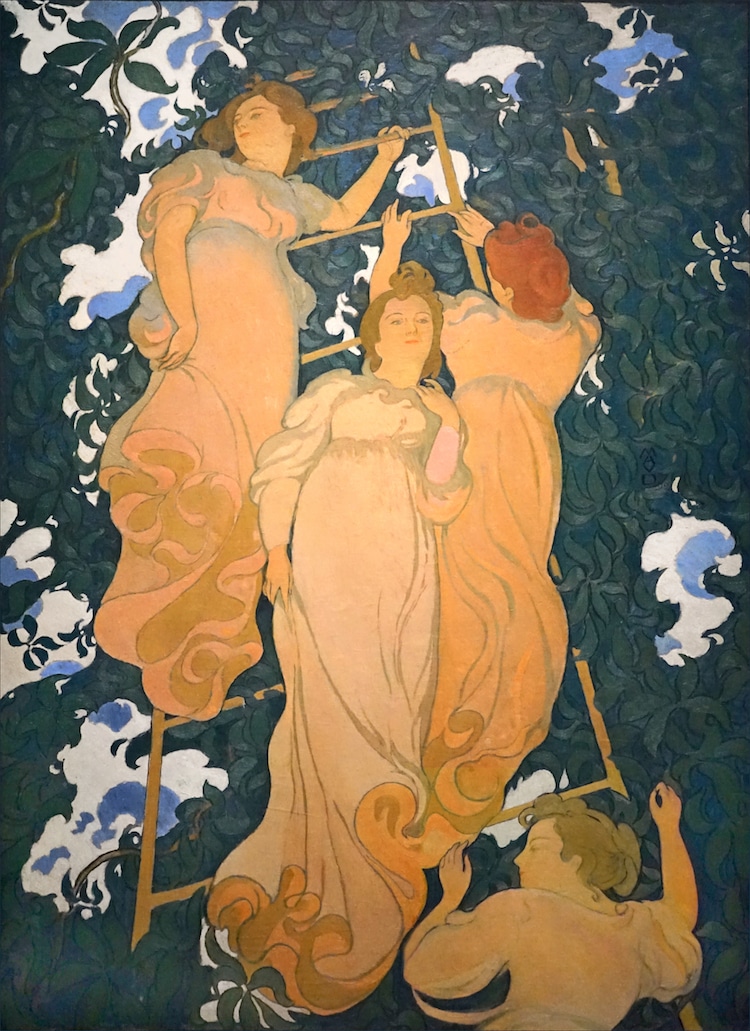 As France approached the turn of the 20th-century, several modernist movements had started to take shape. Inspired by the forward-thinking Impressionists, like-minded fin de siècle artists banded together to push the boundaries of art. While most of these groupings revolved around shared styles, tastes, or techniques, the Nabi movement was more metaphysical in nature, born out of a “prophecy” that promised a new age of painting.

Who were the Nabis? 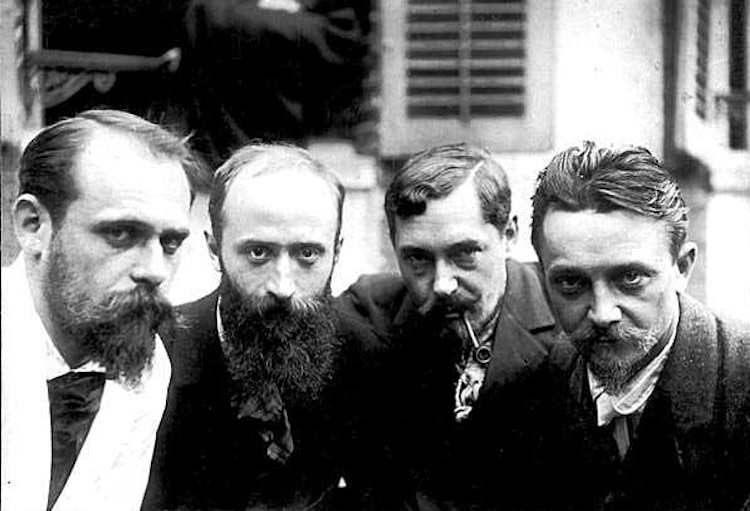 The Nabis were a Post-Impressionist group of artists that emerged in 1888 and disbanded in 1900. Founded by Paris-based artist and student Paul Sérusier, the Nabis also included Pierre Bonnard, Maurice Denis, Paul Ranson, Ker-Xavier Roussel, Félix Vallotton, and Édouard Vuillard. Together, these young artists sought to “revitalize” painting by harnessing form and color as a means of unmediated personal expression—not as objective descriptors.

Symbolist poet Henri Cazalis christened the artists with the name “Nabis”—a term derived from the Hebrew and Arabic word for “prophets“—as a nod to the devout, nearly spiritual nature of their artistic brotherhood. “He gave us a name which, with respect to the studios, made us initiates,” member Maurice Debis explained, “a sort of secret society with mystical tendencies, habitually in a state of prophetic fervor.”

The Emergence of the Nabis 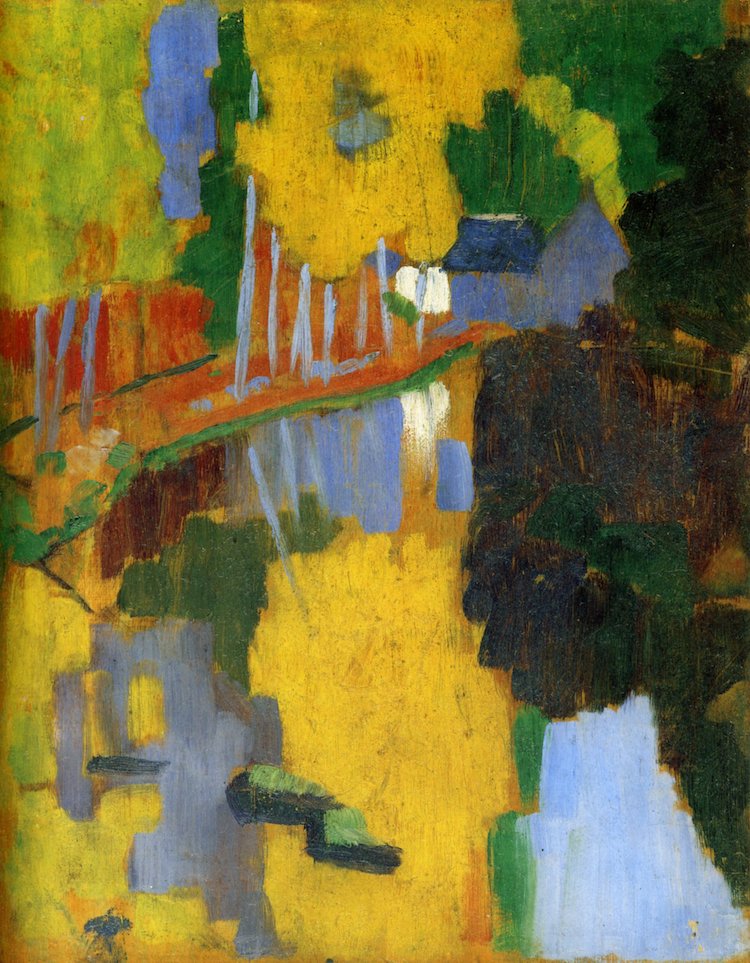 In the summer of 1888, Paul Sérusier—a 24-year-old art student at Académie Julian, a private art school in Paris—joined an artists' colony in Pont-Aven, a picturesque commune in Brittany, France. With Post-Impressionist pioneer Paul Gauguin as his mentor, Sérusier completed The Talisman, a virtually abstract landscape that he and fellow Académie Julian students Denis, Bonnard, and Ranson would soon embrace as the inaugural Nabis painting.

The Talisman channels Gauguin's signature style: flat brushwork, expressive forms, and a vivid color palette. Most importantly, however, this groundbreaking piece illustrates the Nabis' idea of “pure painting,” a sensation-driven approach that would see the artists “liberated from all the yokes that the idea of copying brought to painters' instincts.”

Invigorated by this new approach to painting, the Nabi movement quickly materialized. The following year, the group held its first exhibition, The Impressionist and Synthesist Group, in the Café des Arts, an avant-garde locale within close proximity to the official art pavilion of the 1889 Paris World's Fair. In 1890, 18-year-old member Maurice Denis crafted The Definition of Neo-traditionalism, a group manifesto that famously prompted readers to “remember that a picture, before being a battle horse, a female nude or some sort of anecdote, is essentially a flat surface covered with colors assembled in a certain order.”

That same year, the Nabis established a studio at 28 rue Pigalle in Paris. Though comically described as being “as large as a pocket handkerchief,” this site was key to the movement; in addition to serving as a place for the city's avant-garde to meet, mingle, and exchange ideas, it is where the Nabi movement developed and flourished. 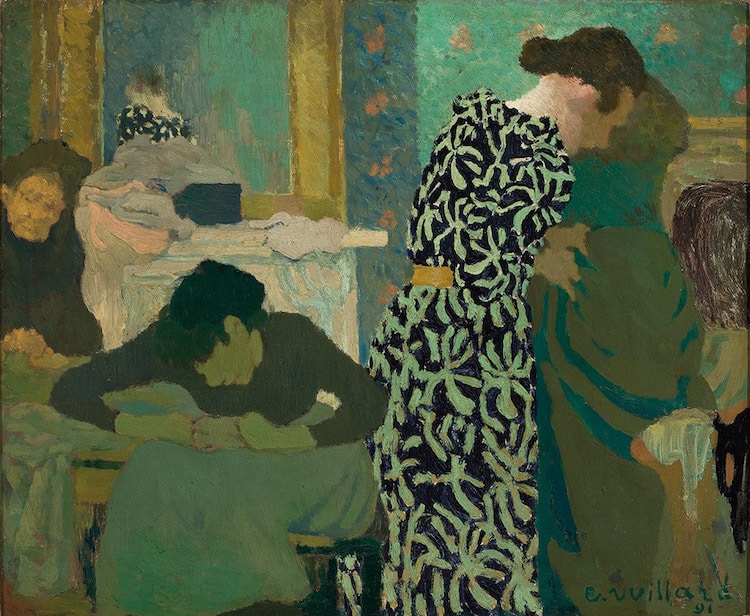 Like Post-Impressionist work as a whole, Nabi paintings did not adhere to a specific style. Instead, they were unified by a shared objective: to evoke emotion rather than replicate real life.

By forgoing an accurate sense of perspective, the Nabis were no longer limited to real-life spatial confines. “I'm trying to do what I have never done—give the impression one has on entering a room: one sees everything and at the same time nothing,” Bonnard said. 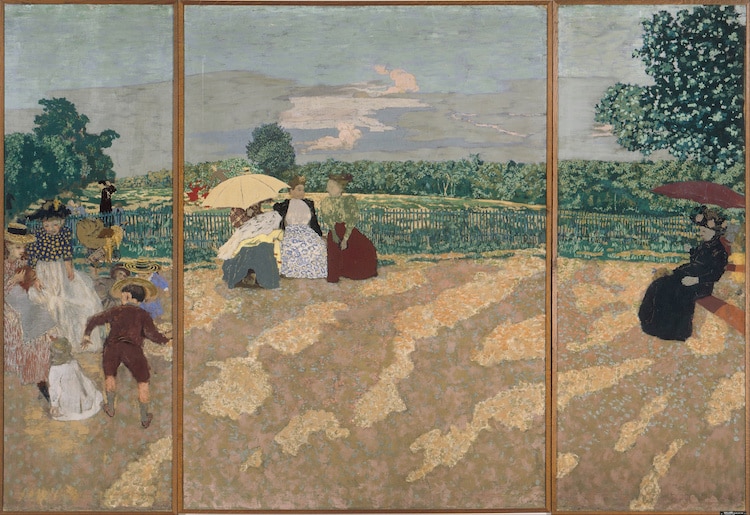 This Japanese influence is not only evident in Nabi paintings; it is also apparent in Nabi decorative art.  In addition to conventional canvases, the Nabis rendered their paintings as folding screens—an approach that took their interest in the art of Japan a step further.

Folding screens were not the only decorative art objects crafted by the Nabis. They also produced wallpaper, tapestries, ceramic wares, and stained glass. In 1892, they also began designing avant-garde sets and costumes for theatrical productions—a working relationship that soon saw them creating posters, playbills, and other graphic art.

By the end of the decade, however, the Nabis had abandoned these cutting-edge art forms, returning to their devout painterly roots before disbanding in 1900. 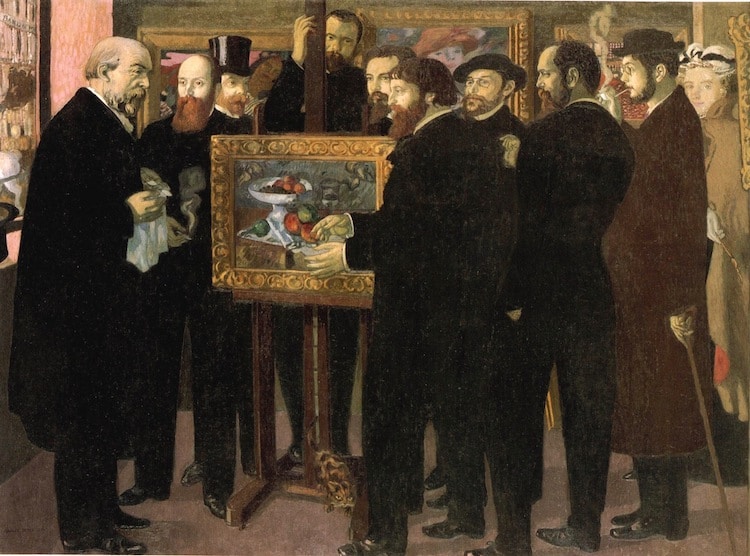 Why did the Nabis decide to separate? Decades later, original member Édouard Vuillard explained that their work became obsolete with the emergence of increasingly modern movements. “The march of progress was so rapid,” he explained in 1937. “Society was ready to welcome Cubism and Surrealism before we had reached what we had imagined as our goal. We found ourselves in a way suspended in the air.”

While the most prominent members of the Nabi group had moved on by the onset of the 20th century (Vuillard, for example, turned to realism, while Bonnard would explore a wide array of styles before his death in 1947), their legacy has remained relatively in-tact. Though often overshadowed by succeeding genres, Nabi art paved the way for modernists interested in a new form of traditional art—a paradox “prophesied” by Maurice Denis in his manifesto.

“Neo-traditionalism cannot waste its time on learned and feverish psychologies, literary sentimentality requiring an explanation of the subject matter, all those things which have nothing to do with its own emotional domain,” he said. “It has reached the stage at which definitive syntheses are possible. Everything is contained within the beauty of the work.”