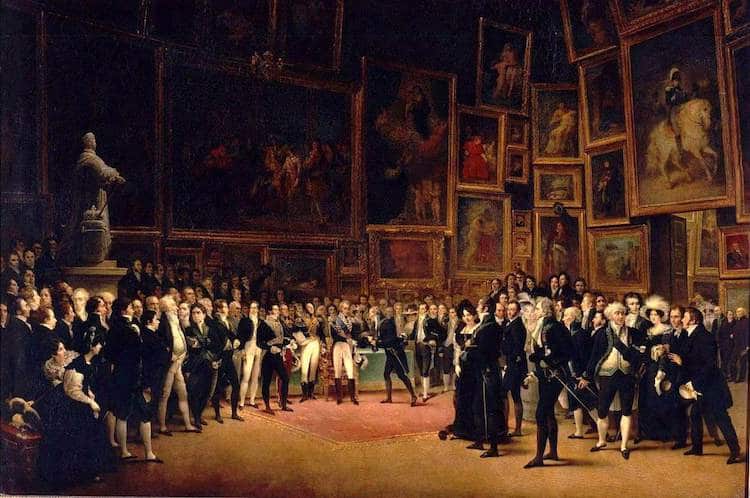 François Joseph Heim, “Charles V Distributing Awards to the Artists at the Close of the Salon of 1827,” 1824 (Photo: Wikimedia Commons Public Domain)

In 1874, several artists based in Paris banded together to hold an independent art show. Later known as the Impressionists, these figures took it upon themselves to present their own paintings, prints, and sculptures, bypassing an external selection process. Today, this may seem like standard practice. In 19th-century France, however, it was considered a radical move, as it subverted the Salon.

At this time, the Salon served as Paris' premier art exhibition. Organized by the prestigious Académie royale de peinture et de sculpture (“Royal Academy of Painting and of Sculpture”) and led by a jury with the power to pick and choose what work was worth showing, this annual event could make or break artists' careers. Most importantly, however, it had a profound effect on European art as a whole, as it enabled an elite organization to dictate the definition of art.

Today, the Impressionists are known for their radical rejection of the Salon. While these figures were the first to hold alternative exhibitions, they weren't the last. Before taking a look at the official show and its various offshoots, however, it's important to understand the history of the salon in France—a role that begins with academies. 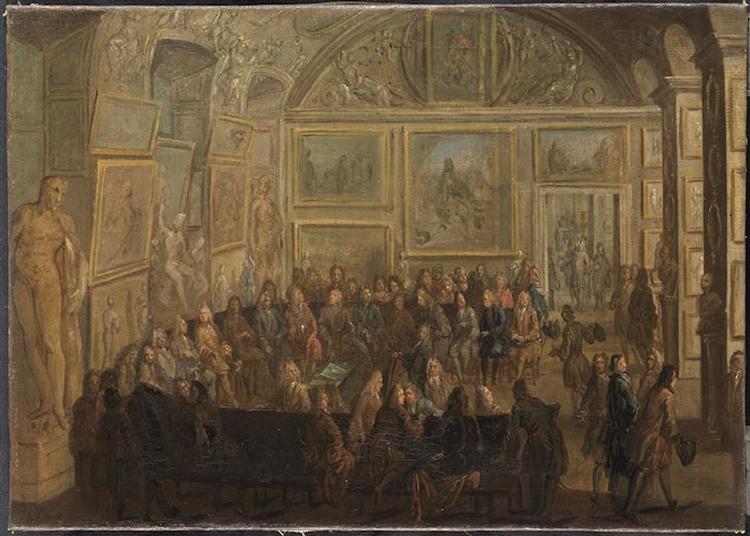 Jean-Baptiste Martin, “An ordinary assembly of the Royal Academy of Painting and Sculpture at the Louvre,” ca. 1712-1721 (Photo: Wikimedia Commons [Public Domain])

During the Renaissance, the arts flourished across Europe. In France, this golden age saw the emergence of academies, reputable institutions intended to foster all aspects of French culture. In 1570, French poet Jean-Antoine de Baïf founded the Académie de Poésie et de Musique (“Academy of Poetry and of Music”), the first academy in France. Backed by Charles IX of France, this organization was established as a means to revive the Classical style—a goal shared by the Académie royale de peinture et de sculpture.

The Académie royale de peinture et de sculpture was founded in the mid-17th century. The first of its kind, this academy aimed to allow all artisans—not just those unfairly favored by an archaic guild system—to work as professional artists. Prominent figures like court painter Charles Le Brun and courtier Martin de Charmois proposed this idea to King Louis XIV, who gave his approval in 1648.

In order to achieve this elite objective, the academy began hosting a periodic Salon. 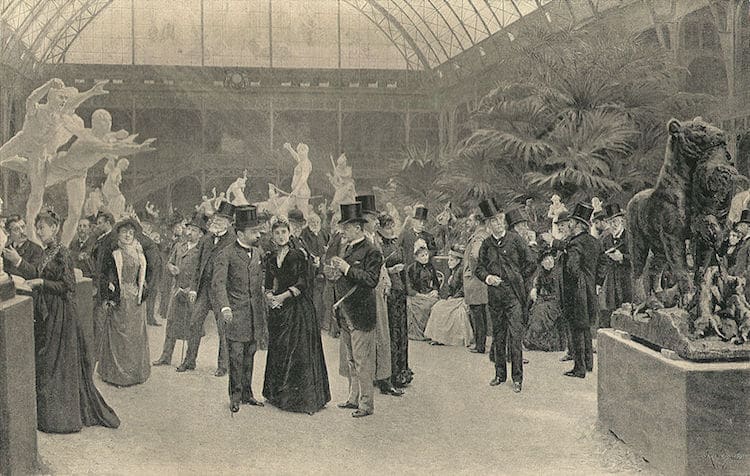 The inaugural Salon opened to a limited public in 1667. Sponsored by the French monarchy and set in the Salon Carré (a recently built room in the Louvre), the show featured work by recent graduates of the Académie royale de peinture et de sculpture.

While the event's inclusivity increased over the years (in 1791, sponsorship switched from royal to government bodies, and, by 1795, submission was opened to all artists), its jury (established in 1748) rarely broke from tradition. When selecting artwork, for example, they favored conservative, conventional subject matter—including historical, mythological, and allegorical scenes as well as portraiture—rendered in a realistic style.

The Academy's traditional taste was overwhelmingly accepted until the 19th century, when an increasing number of European artists began embracing the avant-garde. While the Academy would reject most modernist pieces, some famously managed to secure a spot, including Édouard Manet's nude Olympia in 1863 and John Singer Sargent's Portrait of Madame X, a contemporary portrait exhibited in 1884.

For the most part, however, pieces that did not adhere to the academy's traditional tastes were rejected, forcing forward-thinking artists to take the exhibition of their work into their own hands. This led to the decline of the Paris Salon in the 1880s, and, most importantly, culminated in a new tradition: Salon alternatives.

As early as the 1830s, satellite shows would pop up across Paris during the Salon. These independent shows would often feature works that had been rejected by the Académie royale de peinture et de sculpture, inspiring offshoots for years to come. 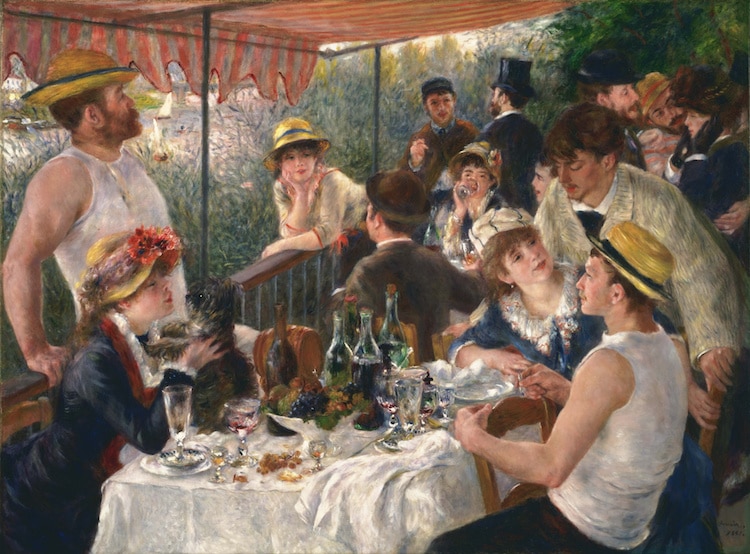 The Salon des Refusés of 1863 was the first notable Salon alternative. Ironically, this “Salon of the Refused” wasn't held by disgruntled artists or avant-garde sympathizers. Instead, it was put on by Emperor Napoleon III, who viewed it as a way to appease those upset with the limited works selected by the Salon that year.

While originally mocked by the mainstream, today, many pieces presented in the Salon des Refusés are considered masterpieces, including Symphony in White, No. 1 by James Abbott McNeill Whistler and Le déjeuner sur l'herbe (“The Luncheon on the Grass“) by Manet.

Eleven years after the Salon des Refusés, the Impressionists—originally known as the Société Anonyme Coopérative des Artistes Peintres, Sculpteurs, Graveurs (“Cooperative and Anonymous Association of Painters, Sculptors, and Engravers”)— held their first independent exhibition. Unlike the former, which featured works rejected by the Salon, the latter skipped submission all together and showed works created and curated by the Impressionists themselves.

Set in the studio of Nadar, a contemporary French photographer, this exhibition comprised several paintings by 30 artists, including Claude Monet, Pierre-Auguste Renoir, Edgar Degas, and Camille Pissarro. Among these works was Monet’s Impression, Sunrise, a landmark landscape painting that inspired the movement's name. 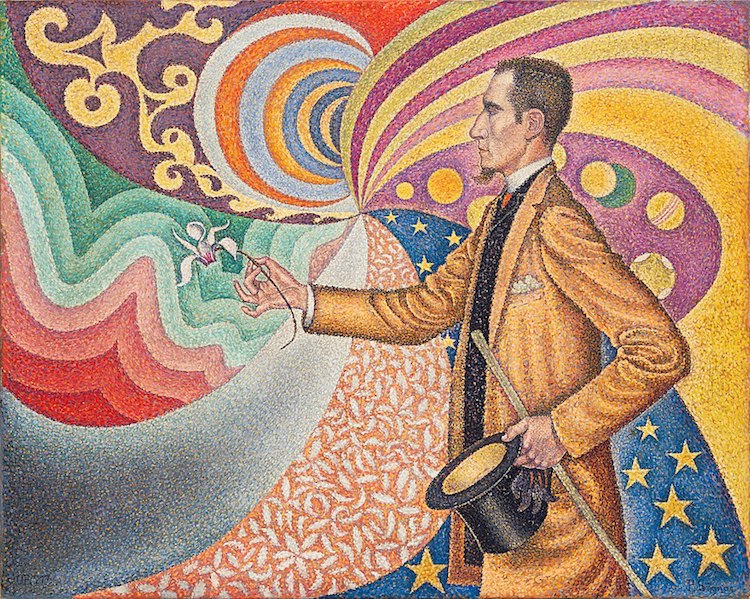 Paul Signac, “Opus 217. Against the Enamel of a Background Rhythmic with Beats and Angles, Tones, and Tints, Portrait of M. Félix Fénéon in 1890,” 1890 (Photo: Wikimedia Commons [Public Domain])

Two years before the Impressionists would conclude their 12-year run, the Salon des Indépendants (“Salon of Independents”)—a show that remains active to this day—made its grand debut. Founded by Paul Cézanne, Paul Gauguin, Henri de Toulouse-Lautrec, Paul Signac, and other leading modernists, this salon promised to be held “sans jury ni récompense” (“without jury nor reward”).

Even without an incentive, artists flocked to have their work featured in this radical show. In its inaugural event alone, 5,000 works from over 400 creatives were exhibited. Over the course of its 134-year history, the Salon des Indépendants has featured highlights ranging from Paul Signac's Opus 217. Against the Enamel of a Background Rhythmic with Beats and Angles, Tones, and Tints, Portrait of M. Félix Fénéon in 1890 to Henri Matisse's Le bonheur de vivre (“The Joy of Life”). 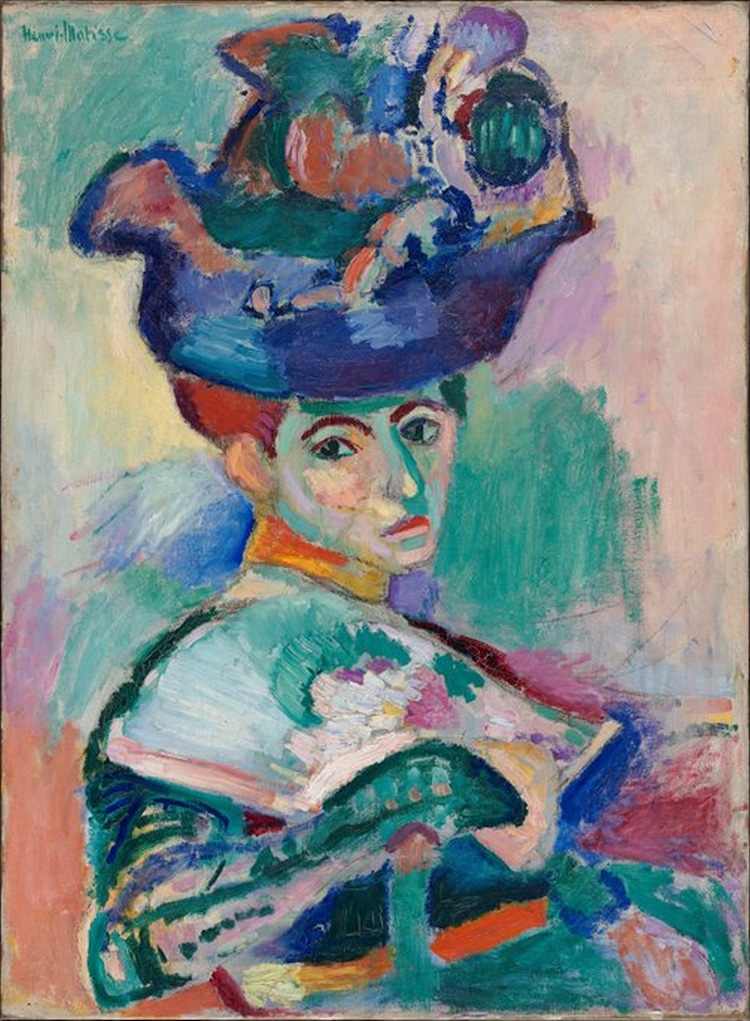 The Salon des Indépendants is not the only major salon that still exists today. Every October, the Salon d'Automne (“Autumn Salon”) pops up on Paris' celebrated Champs-Élysées. Here, artists from all walks of life are invited to exhibit fine art, decorative objects, and photography.

The first Salon d'Automne was held in 1903. This show was met with positive reviews, prompting annual shows to continue indefinitely. Throughout its 117-year history, the Salon d'Automne has featured acclaimed works that have helped pioneer entire movements, with Fauvism and Cubism at the forefront.

Along with the even older Salon des Indépendants, the Salon d'Automne proves both the lasting legacy—and the staying power—of the subversive salon.

Like subversive art? Share
Like My Modern Met on Facebook
Get Our Weekly Newsletter
Become a
My Modern Met Member
As a member, you'll join us in our effort to support the arts.
Become a Member
Explore member benefits