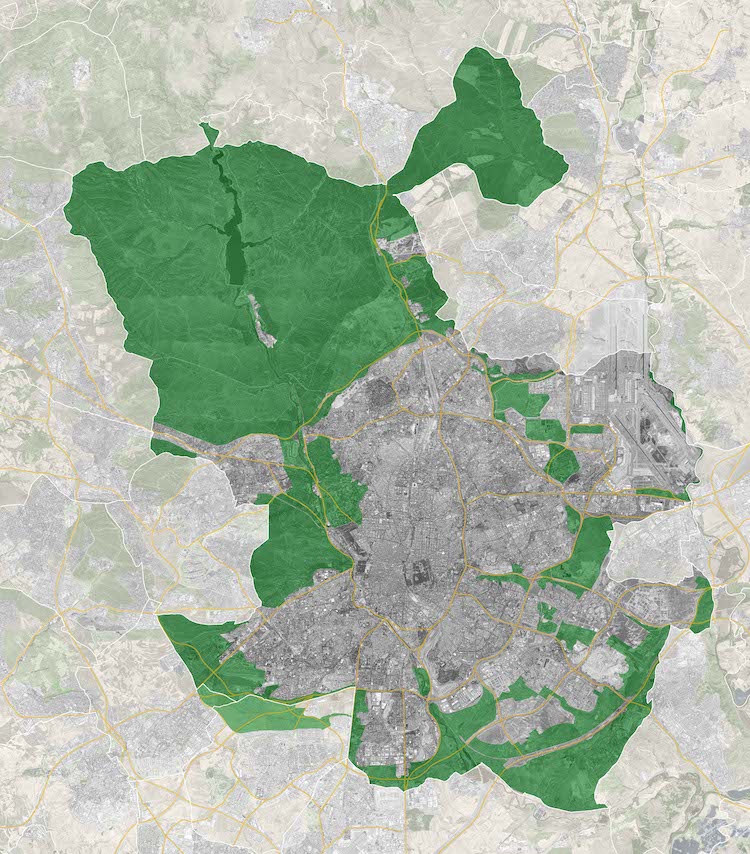 Cities generate about three-quarters of the world’s greenhouse emissions and they take up about two-thirds of the global energy supply. Now, more than ever, cities are being asked to address their impact on the world. Luckily, Madrid has a plan to reduce its emissions while making the city more livable with a massive urban forest. Defined as a “green wall” the Bosque Metropolitano (aka the Madrid urban forest) will help to fight climate change.

“What we want to do is to improve the air quality in the whole city, to fight the heat island effect that is happening inside the city, to absorb the greenhouse emissions generated by the city, and to connect all the existing forest masses that already exist around the city,” explains Mariano Fuentes, Madrid’s councilor for Environment & Urban Development.

The project will include half a million trees spread out across the perimeter around the city that stretches 46 miles. This new forest will include beech, black pine, and oak trees that were all carefully chosen as species indigenous to the region. Plant selection was an important consideration to ensure that the new green space would act more like a forest than a park.

“It is not a park,” asserts Daniel González, architect and city council urban advisor. “Because the requirements were that it would use a very little amount of water, planting indigenous trees… and looking for other ways of maintenance. Because at the end of the day an infrastructure this big needs to be preserved with a minimum effort so it can be sustainable over time.”

The urban forest is one part of an integrated system of new sustainable measures in the city, including new “environmental corridors” throughout Madrid. These include prioritizing cycling and public transportation over personal vehicular traffic, investing in greener energy sources, and more. You can learn a bit more about these endeavors, and Madrid’s new urban forest in particular, in coverage by Euronews below.

Madrid plans to counter the city's negative contributions to the climate crisis by building an urban forest. Learn more about these plans:

All images via City of Madrid.