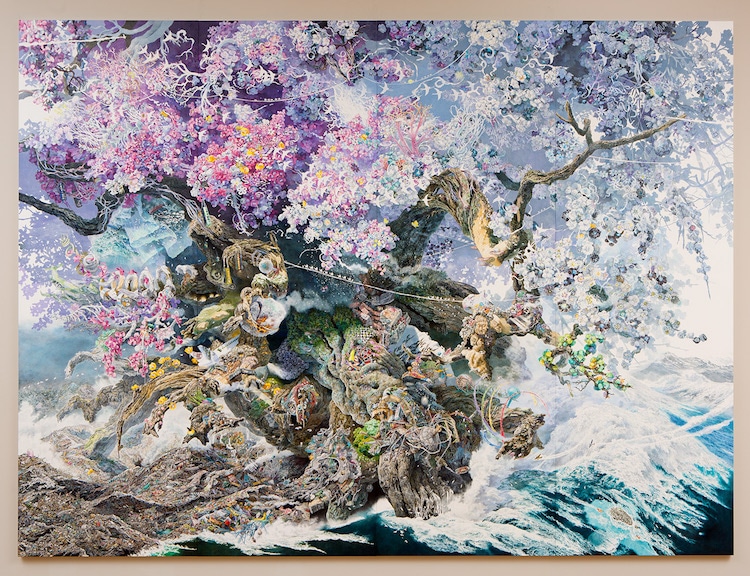 Image via the Chazen Museum of Art

From great pain often comes great artwork. Such is the case with Manabu Ikeda‘s monumental Rebirth, a 13′ x 10′ masterpiece that the artist toiled over for 3.5 years, working 10 hours a day. It's Ikeda's largest work to date and is the Japanese artist's response to the 2011 Tōhoku earthquake and tsunami that set off the Fukushima nuclear disaster. Started in July 2013, Ikeda worked out of the basement studio at the Chazen Museum of Art in Madison, Wisconsin—part of their artist in residence program.

The finished piece, known as Rebirth, is a powerfully emotional drawing filled with details plucked from Ikeda's imagination. It provides a visual representation of the struggle between man and nature—a theme historically at the core of Japanese art. As a society that has undergone natural disaster continuously through history, yet rebuilt itself from the ashes of tragedy, the work is a tribute to a nation that passes through strife with hope for a better future. The work builds out from the center of the panel, where a large tree crashes perilously into the sea, cherry blossoms morphing into blooms that are actually tents—temporary shelter after the storm. The bottom of the piece shows mass destruction, yet close examination reveals people looking to survive, using the carcasses of airplanes to plant vegetables or rebuilding homes on the tree itself.

Ikeda primarily works in pen and acrylic ink, focusing on specific areas of the panel at a time in order to then build out the narrative. “My goal is to faithfully express my view of the world in my composition, but I don’t intentionally depict detailed images,” he explains. “Because I see details when I observe things, rather than the whole, I find pen and ink to be the best tools to express how I see them.” He typically works at a rate of four-square-inches a day, but was slowed when a skiing accident rendered his dominant hand temporarily useless. Concerned about finishing the work on time, he trained his left hand to draw after a few short practice sessions and soldiered on. 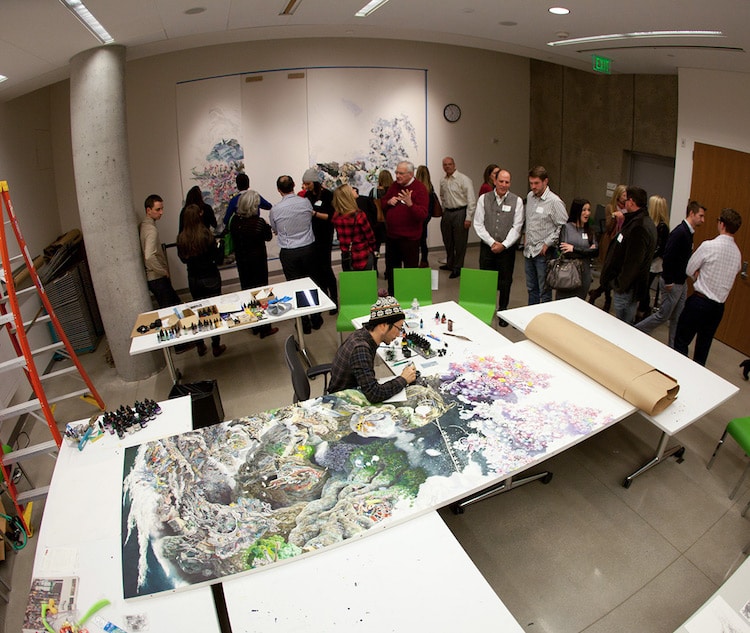 While the work is primarily about disaster recovery, the artist sought to inject humor whenever possible. A keen eye will reveal touches of Madison, Wisconsin in the work—from a Home Depot to the local Octopus carwash. Humor aside, these touches bring a universal message to the artwork. Ikeda reminds us that this tragedy is not confined to Japan, and asks us to ponder our own reactions if such strife were to arrive close to home.

Color also plays an important role in the epic painting. White wisps flutter through the composition, representing the souls of those who have left us and those who are born, thus accentuating the cyclical nature of life. Certain tents are either black or white, symbolically referencing the life or death of those within; whereas, the yellow centers of select blooms represent newborns, surrounded by parents who will raise their children from this chaos. Small sections left uncolored that take the form of humans or animals are just as impactful. There are two reasons for this decision. “I don’t want to impose color or draw humans and decide their characters,” Ikeda reveals, “I also want people to imagine freely what they would put inside those humans and let it be a space they enter.”

The detailed complexity of Rebirth never overwhelms its emotional impact. The force transmitted into the work by the artist leaps forth and it's impossible not to be touched by the outpouring of emotion shown by Ikeda when he sees his masterpiece hung on the walls of the museum for the first time in Clayton Adams' short film, which can be viewed below.

Rebirth, which could be worth millions when eventually sold, is currently on view at the Chazen Museum of Art through December 11, 2016. 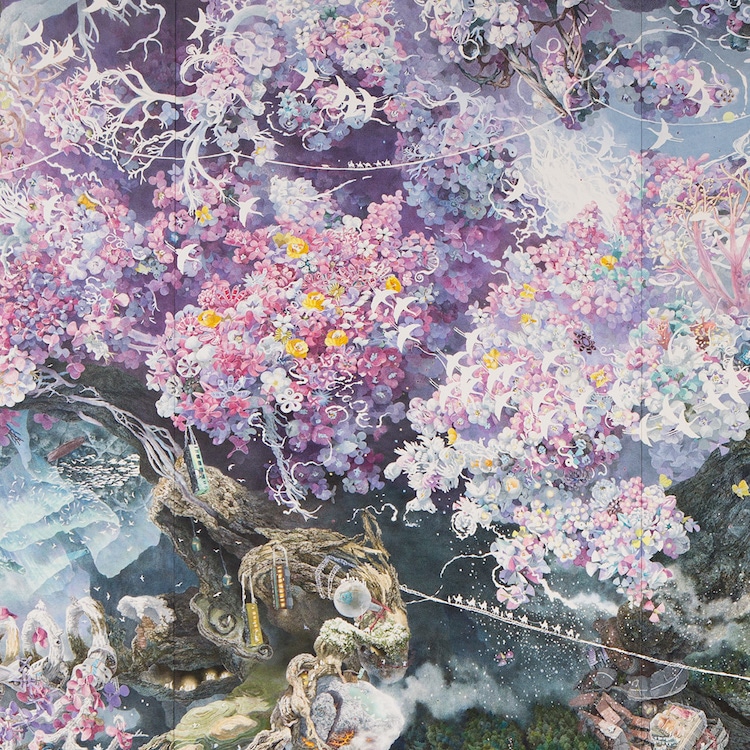 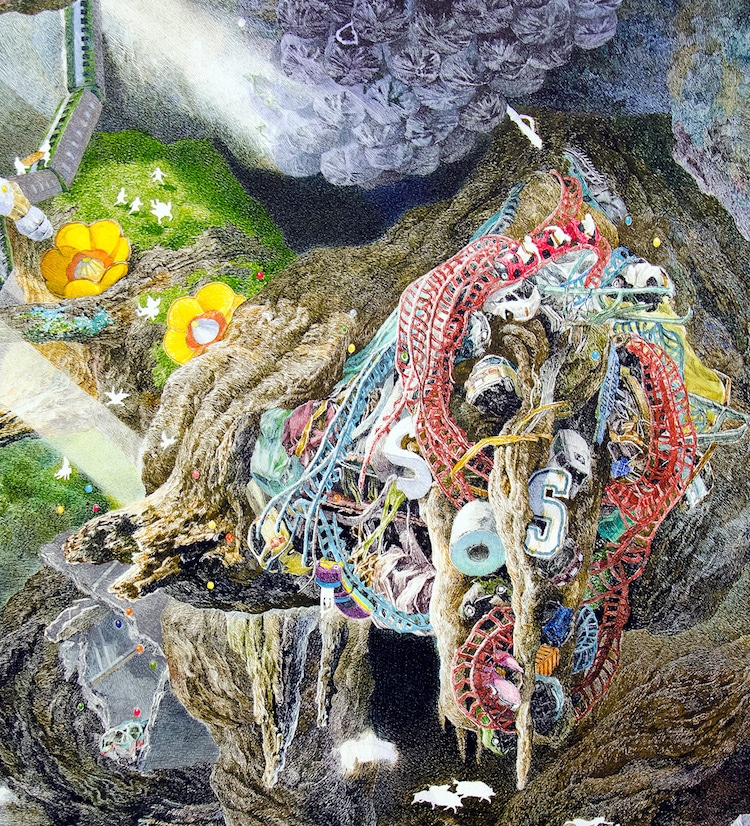 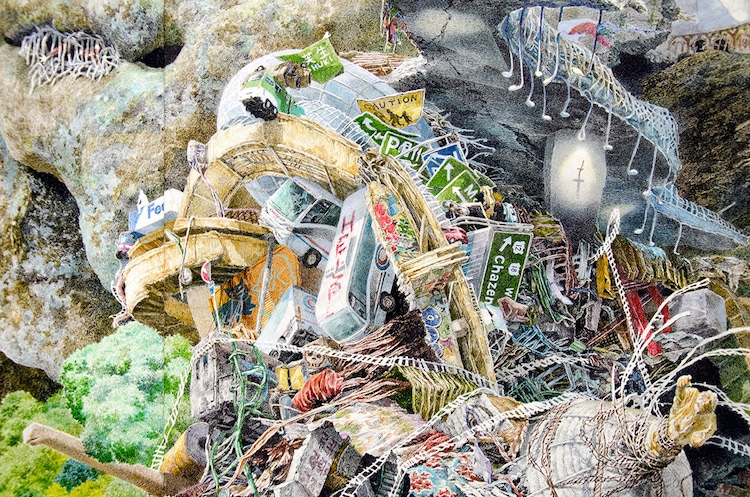 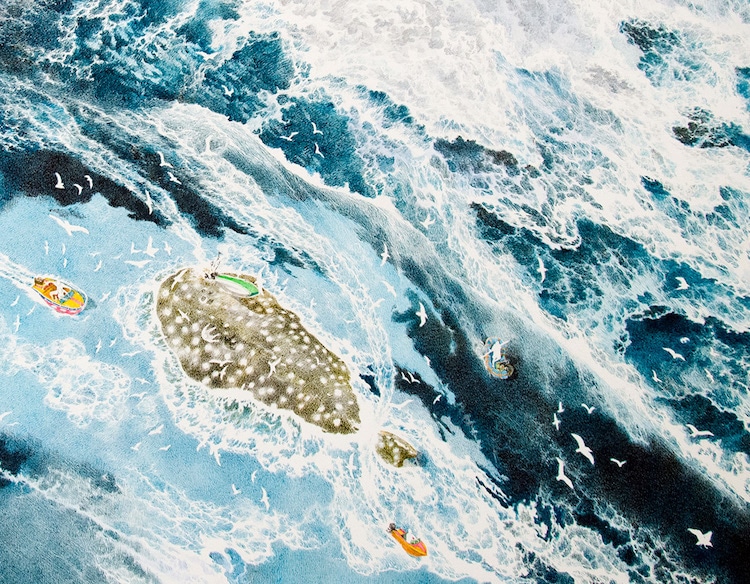 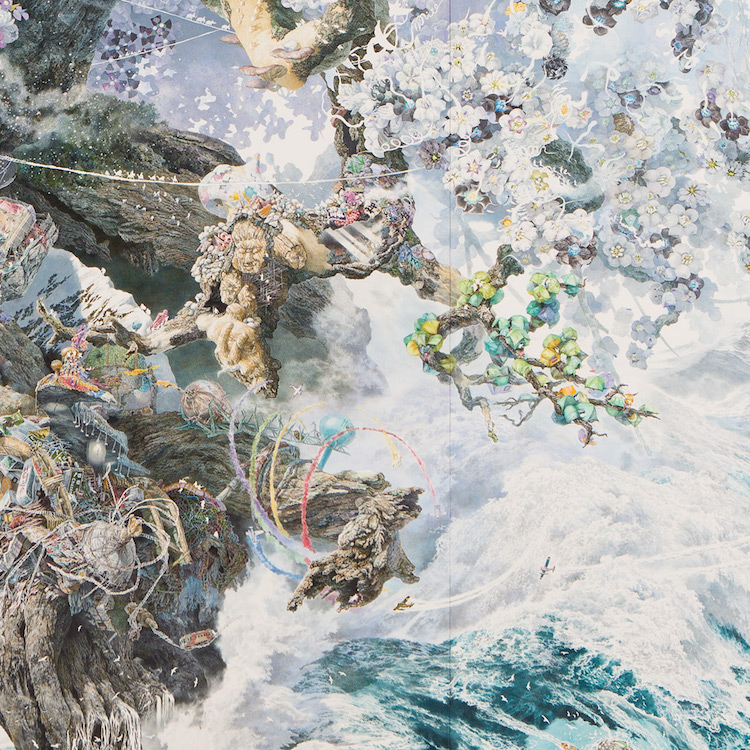 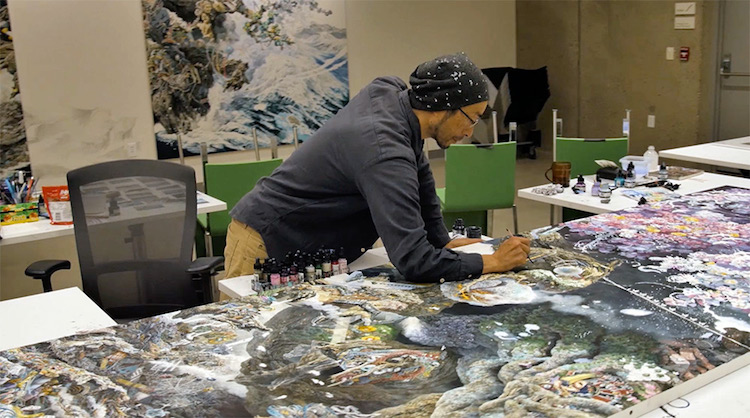 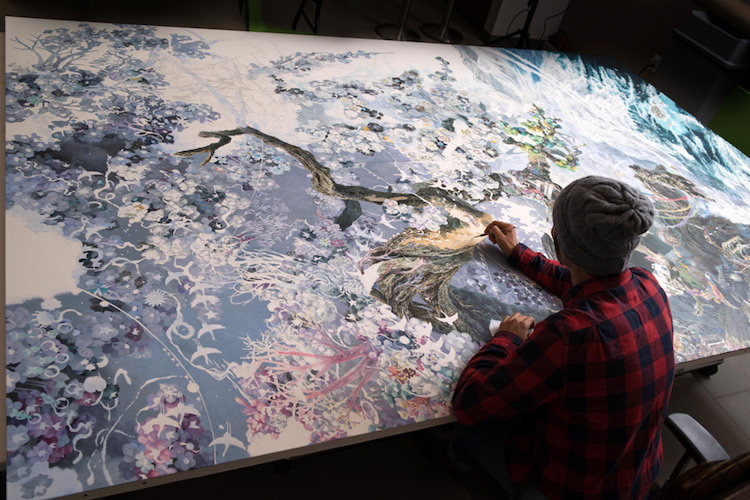 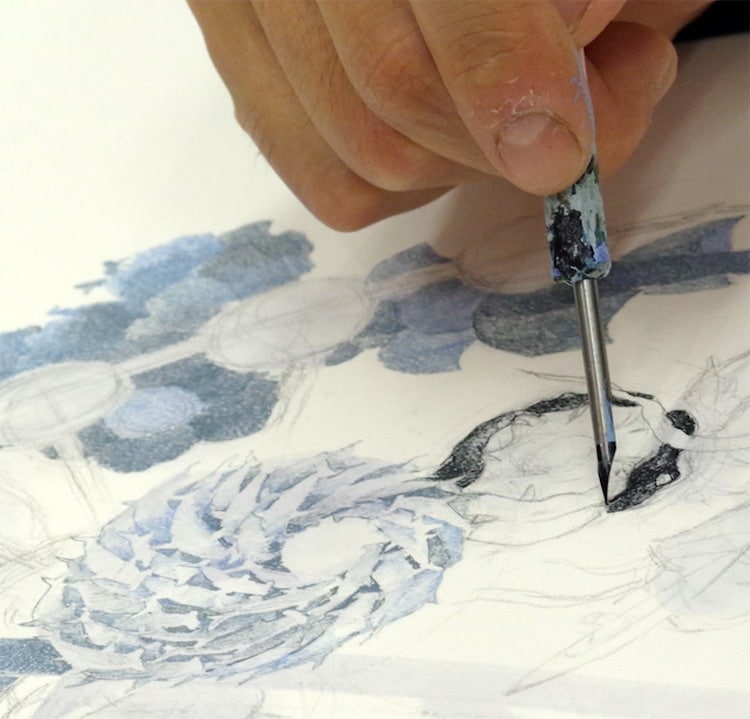 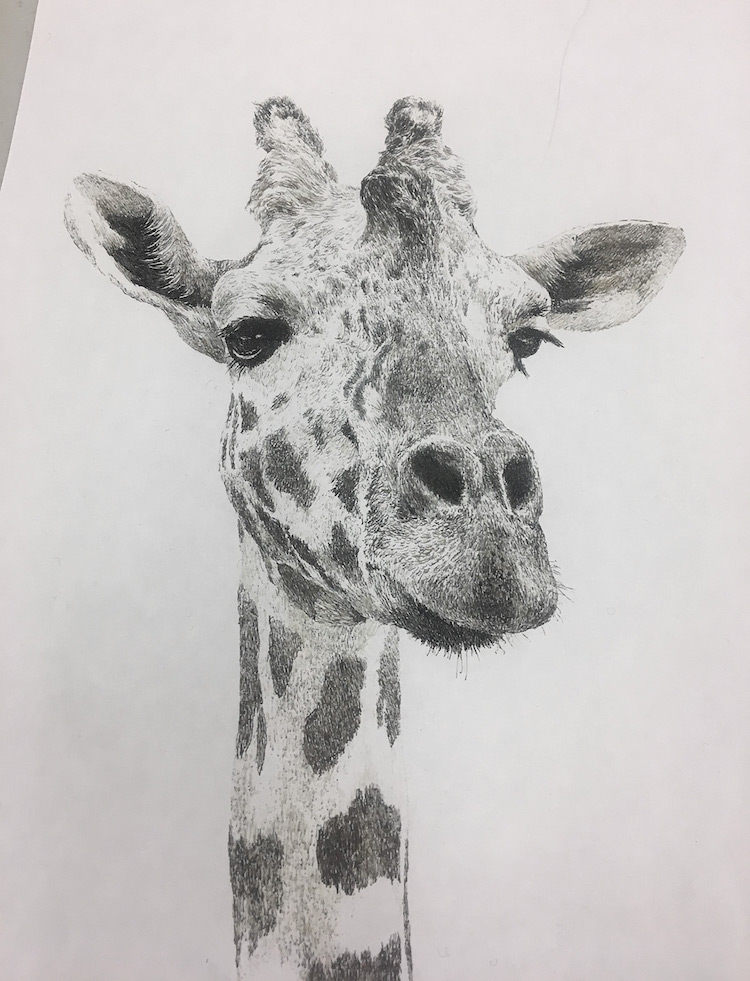