Man Paddle Boards as Fireworks Explode All Around Him 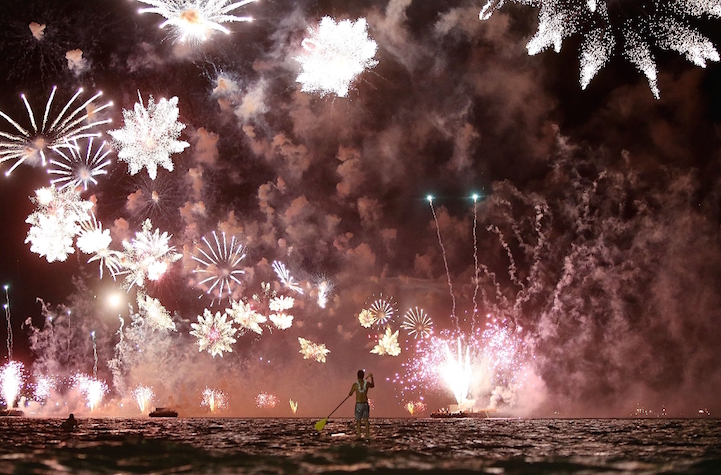 What an unreal shot! Photographer Mario Tama captured this amazing photo on New Year's Eve in Copacabana, Rio. A brave man riding a paddle board makes his way to the barges as fireworks explode all around him. This photo was taken with a Canon 5D Mark III. Now here's the photographer's story.

“Shooting fireworks is always a roll of the dice and I had never been particularly fortunate in that domain. Somehow my karma seems to have changed here in Rio, which isn't surprising given the resplendent setting of Copacabana beach over which the annual New Year's display is launched. As opposed to most venues around the world, Rio's celebration is an interactive experience; one can wade into the water and mingle in the ocean, as the fireworks explode overhead. While most of the purported 2 million revelers stay on land, a brave few decide to take the plunge and meld with the Atlantic, where barges are annually positioned to launch the illuminations.

“Cariocas (as Rios denizens are called) are famously in love with the ocean and as summertime descends the beaches swell with those of all shades and societal levels. The beaches of Rio are often likened to a democratic haven of balance in a country where rampant inequality is the standard baseline. Cariocas are sport-obsessed and every day at sunset one can encounter runners, bikers, soccer players, surfers, swimmers, skateboarders, and indeed stand up paddle boarders exerting along the waters of Copacabana.

“So, for New Year's, I knew I wanted to enter the water. I was concerned about damaging my gear, as of course the sea is unpredictable. Thankfully a friend was kind enough to accompany me along the shoreline carrying my backpack of lenses, as I only wanted to enter the water with one camera and one lens. I suppose it shouldn't have come as a surprise that a stand up paddle boarder would attempt to make his way towards the fireworks on this evening. That said I was rather shocked to suddenly see this guy paddling through my frame, far off in the distance. I couldn't capture him properly with my wide 16-35 so I hurriedly sloshed back to shore to locate my friend with the backpack and switched lenses to the 70-200 (zoom). I made a few frames of him paddling towards the mayhem, then switched back to the 16-35 and returned into the water. I didn't think much of the image at the time, I thought he was probably too small in the frame and perhaps he wouldn't be visible. Only after opening the image in Photoshop did I feel like I had something strong.

“I hope this image captures a tiny slice of the Carioca spirit which I feel very blessed to be a witness to.”