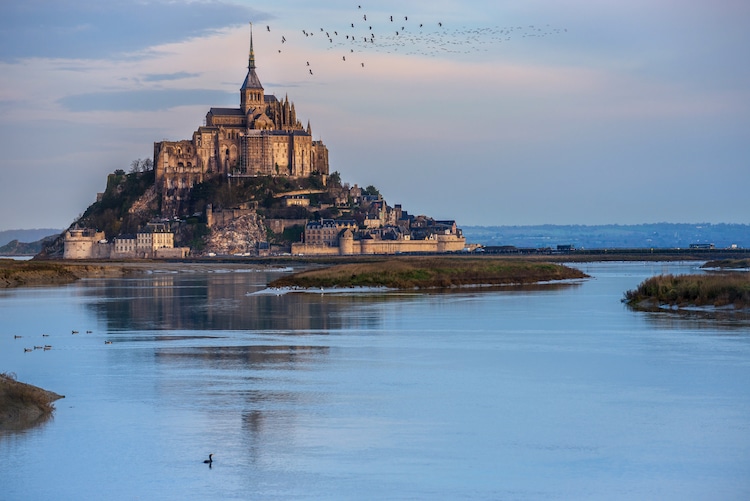 Nestled off the coast of Normandy is Mont-Saint-Michel, a magical site that dates back to the Middle Ages. Wrapped in a picturesque village and topped with a sky-high tower, this tidal island looks like it has been plucked from the pages of a storybook.

Though it may resemble a castle in the clouds, Mont-Saint-Michel's history is not as dreamy as one would think. Beginning as a place of power in the 6th century, the island eventually evolved into a strategic stronghold, the site of an abbey, and even a Revolution-era prison. When paired with its fairytale-like appearance, this fascinating history has made Mont-Saint-Michel one of France's most popular destinations and beloved landmarks.

Classified as a rocky tidal island, Mont-Saint-Michel is connected to the mainland by an embankment that is completely submerged during high tide and uncovered during low tide. Because of this phenomenon, the unique site would eventually hold great strategic significance.

Prior to its military role, the island had a different purpose. Established as Mont-Tombe by an Irish hermit in the 5th century, it served as a center of Gallo-Roman culture for roughly 300 years. This ended in the 7th century, however, when it was conquered by the Franks and, shortly after, transformed into a site of pilgrimage. 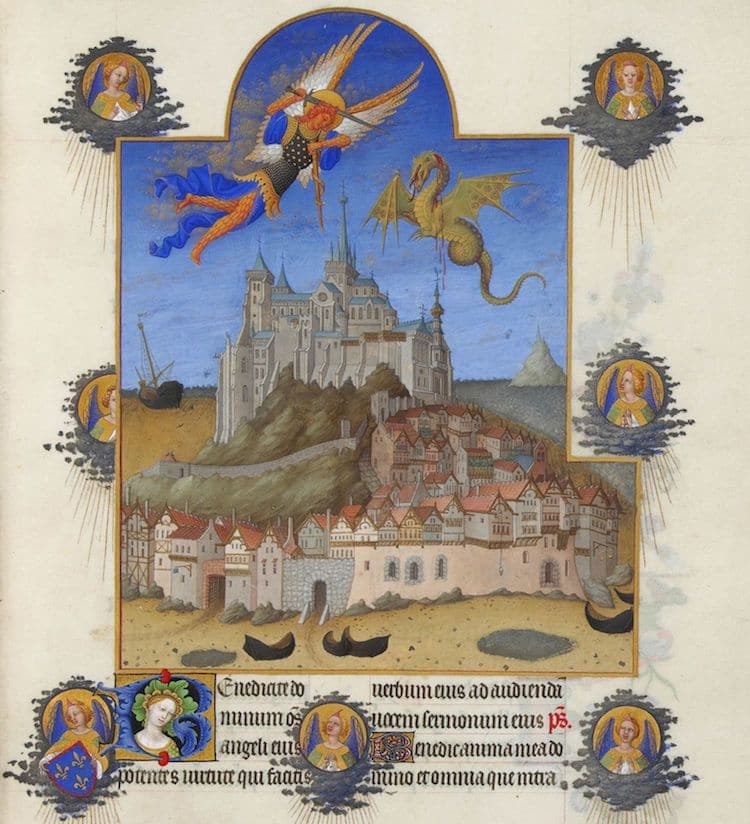 According to legend, in 708 CE, Aubert of Avranches—the bishop of a commune in Normandy—was visited by the archangel Michael. In this vision, Michael, the “chief of the celestial militia,” told Aubert to build a sanctuary in his name atop Mont-Tombe. By 709 CE, Aubert has fulfilled the angel's wish, building and consecrating a small church on the island.

Over the next few hundred years, this church would undergo a number of changes. In 966 CE, it was redesigned in the pre-Romanesque style—an aesthetic that blended Mediterranean and Germanic elements. The following century, it was again rebuilt. This time, it adopted a Romanesque aesthetic characterized by shallow arches, vaulted ceilings, and small windows.

In the 13th century, a fire resulting from a siege by the Bretons burned down much of the abbey. It was then reconstructed a final time, now with elements of Gothic architecture. The church was enlarged and heightened, culminating in the sky-high silhouette of the Merveille that has enchanted visitors for centuries. “Mont-Saint-Michel comes into view like a sublime thing,” French writer Victor Hugo said in the 19th century, “a marvelous pyramid.” 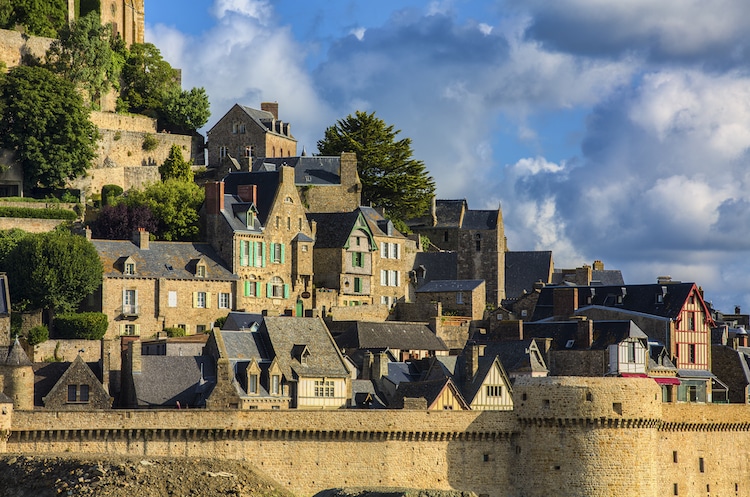 In addition to the abbey, Mont-Saint-Michele has been home to a thriving village for over 1,000 years. “At the same time as the abbey was developing a village grew up from the Middle Ages,” the official Mont-Saint-Michele website explains. “It flourished on the south-east side of the rock surrounded by walls dated for the most part from the Hundred Years war.”

While Mont-Saint-Michele had been fortified since ancient times, the wall erected during the Hundred Years' War proved to be its most proficient method of protection. Flanked by several defensive towers, the wrap-around wall managed to defend the island from English attacks for nearly 30 years.

By the time the Reformation was underway in 16th-century Europe, the island had lost both its military and religious significance. The abbey closed in 1791—just two years after the start of the French Revolution.

“Bastille of the Sea” 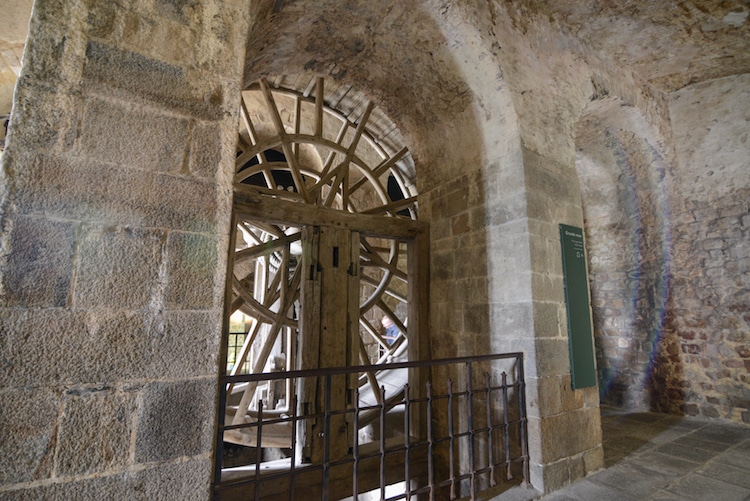 “Treadwheel crane which served as a windlass, installed during the use of the site as a prison, to bring supplies to the prisoners.” (Photo: Wikimedia Commons Public Domain)

At this time, the abbey was converted into a prison to hold priests and other people who opposed the newly instated First Republic. Because of its role as a detention center during the Revolution, Mont-Saint-Michel became known as “Bastille of the Sea”—a reference to the Parisian prison that was stormed and, subsequently, sparked the movement.

Mont-Saint-Michel continued to hold prisoners until 1863, when influential French figures like Victor Huge campaigned for its closure. Once it was shut down, its 650 prisoners were transferred to other locations, and the abbey was rented by a bishop. In 1922, monks returned to the mount, making it a site of religious pilgrimage once again. 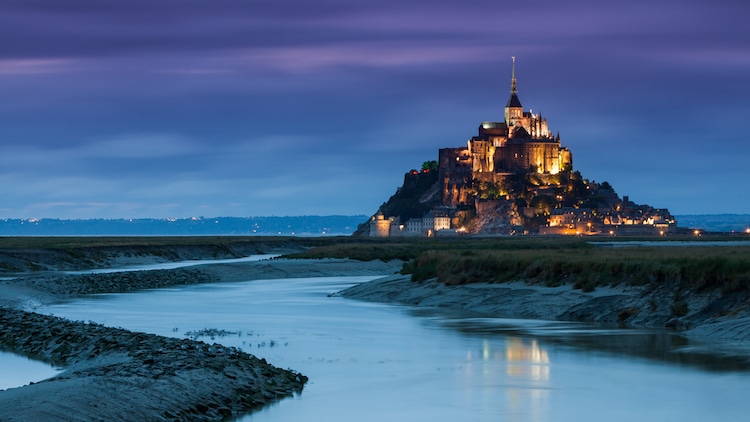 In 1874, shortly before a major restoration project, the abbey was declared a historical monument. Similarly, in 1979, it was deemed a UNESCO World Heritage site. Today, it remains one of France's most visited locales, seeing 2.5 million guests a year.

Whether drawn to its ancient roots, eclectic architecture, or religious significance, visitors are undoubtedly enchanted by this medieval masterpiece and will continue to be for centuries to come.