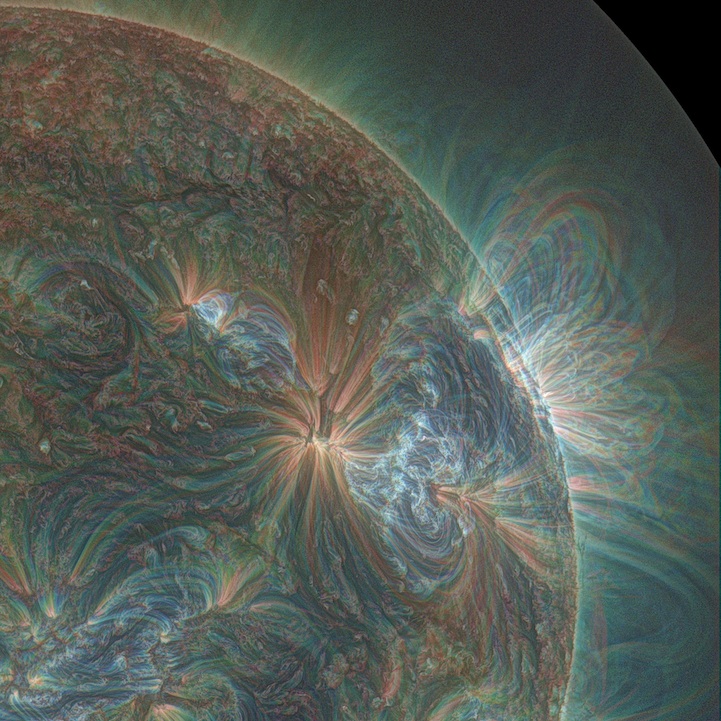 NASA's Solar Dynamics Observatory (or SDO) just released this beautiful, painterly image of the Sun. The SDO was designed to help us understand the Sun's influence on Earth and near-Earth space by studying the solar atmosphere. In this photo, NASA's sun-gazing spacecraft spotted an unusual series of eruptions, forced by fast “puffs” from the Sun's outermost atmosphere (the corona), to interplanetary space. Starting on January 17, 2013, the puffs took place about once every three hours, then, after 12 hours, larger eruptions occurred.

“Looking at the corona in extreme ultraviolet light we see the source of the puffs is a series of energetic jets and related flares,” said Nathalia Alzate, a solar scientist at the University of Aberystwyth in Wales. “The jets are localized, catastrophic releases of energy that spew material out from the sun into space. These rapid changes in the magnetic field cause flares, which release a huge amount of energy in a very short time in the form of super-heated plasma, high-energy radiation and radio bursts. The big, slow structure is reluctant to erupt, and does not begin to smoothly propagate outwards until several jets have occurred.”

She continues, “We still need to understand whether there are shock waves, formed by the jets, passing through and driving the slow eruption. Or whether magnetic reconfiguration is driving the jets allowing the larger, slow structure to slowly erupt. Thanks to recent advances in observation and in image processing techniques we can throw light on the way jets can lead to small and fast, or large and slow, eruptions from the Sun.”

This stunning image is a combination of three wavelengths of light. It shows one of the multiple jets that led to a series of slow coronal puffs. The stunning image has been colorized in red, green and blue.