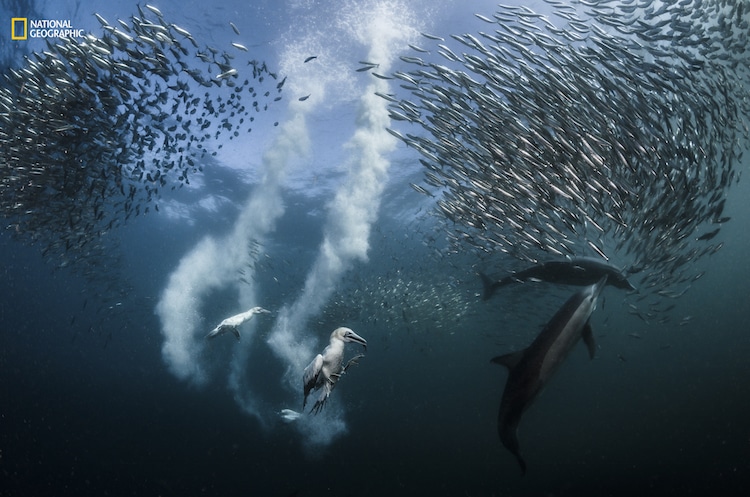 Greg Lecoeur/2016 National Geographic Nature Photographer of the Year. Sardine Run.
1st Place—Action + Grand Prize Winner: During the sardine migration along the Wild Coast of South Africa, millions of sardines are preyed upon by marine predators such as dolphins, marine birds, sharks, whales, penguins, sailfishes, and sea lions. The hunt begins with common dolphins that have developed special hunting techniques to create and drive bait balls to the surface. In recent years, probably due to overfishing and climate change, the annual sardine run has become more and more unpredictable. It took me two weeks to have the opportunity to witness and capture this marine predation.

After reviewing thousands of spectacular entries over several months, a Grand Prize Winner of the 2016 National Geographic Nature Photographer of the Year contest has finally been announced. Greg Lecoeur of Nice, France was awarded the coveted title with his Sardine Run photograph that was captured underwater off the coast of South Africa. The image was taken in 2015 as billions of sardines spawned and migrated along its eastern shore, with this magnificent natural occurrence attracting swarms of predators like dolphins, whales, sharks, and birds. Lecoeru’s prize includes a 10-day trip for two to the Galápagos with National Geographic Expeditions and two 15-minute image portfolio reviews with National Geographic photo editors.

Lecoeur describes the extraordinary experience of shooting this remarkable photo. “One day, the ocean was full of energy. We were escorted by hundreds of dolphins and from a point on the horizon, frantic sounds of gannet birds became louder and their dives from the air seemed to accelerate as they shot straight down, piercing the surface of the sea. Our dive boat headed towards the vortex of sea birds in the air, the adrenaline rush grabbing all of us aboard the Zodiac. The hunt was on! Before jumping into the water, I could not imagine the incredible spectacle that would be found under the surface. All the region’s predators seemed to have gotten the same invitation. Whether friends or enemies, all predators here combine to form a single army, together hunting the small sardines, leading to the greatest “show” on earth… In my view, as a passionate marine biology photographer, this underwater predation is the most exciting and powerful behavior to witness from nature.”

Contestants submitted photographs in the four categories of Action, Landscape, Animal Portraits, and Environmental Issues via National Geographic’s photography community, Your Shot. Winners of top prizes include: Varun Aditya, who placed first in Animal Portraits for a hypnotizing photo of a snake amidst a dense forest; Vadim Balakin in the Environmental Issues category for a jarring photo of polar bear remains in Norway; and Jacob Kapetein in Landscape for a mystical image of a beech tree.

Scroll down to view photographs from selected winners, whose images “showcase the awe-inspiring and diverse natural world,” while inspiring us to explore and preserve our planet’s stunning beauty. 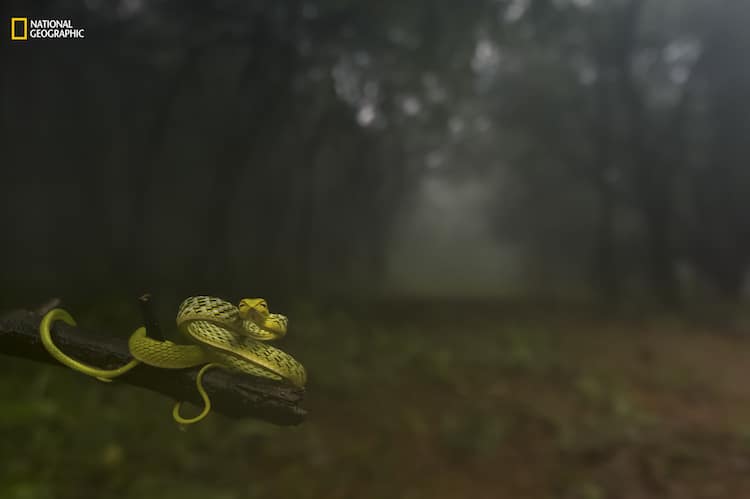 Varun Aditya/2016 National Geographic Nature Photographer of the Year. Dragging you deep into the woods!
1st Place—Animal Portraits: I shot this at Amboli, Maharashtra, India, on July 24, 2016, during a morning stroll into the blissful rain forest. Ceaseless drizzles dampened the woods for 10 hours a day; the serene gloom kept me guessing if it was night or day. The heavy fog, chilling breeze, and perennial silence could calm roaring sprits. And there I saw this beauty. I wondered if I needed more reasons to capture the habitat, for I was blessed to see this at the place I was at. I immediately switched from the macro to the wide-angle lens and composed this frame. 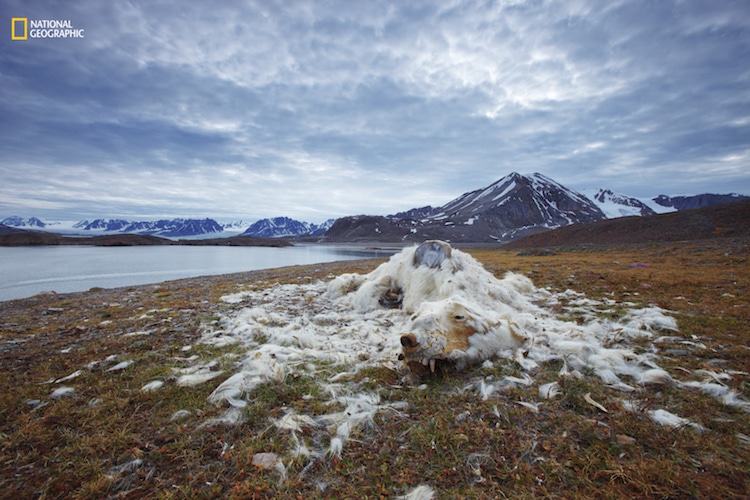 Vadim Balakin/2016 National Geographic Nature Photographer of the Year. Life and Death.
1st Place—Environmental Issues: These polar bear remains have been discovered at one of the islands of northern Svalbard, Norway. We do not know whether the bear died from starving or aging, but more likely if we see the good teeth status, it was from starving. They say nowadays that such remains are found very often, as global warming and the ice situation influence the polar bear population. 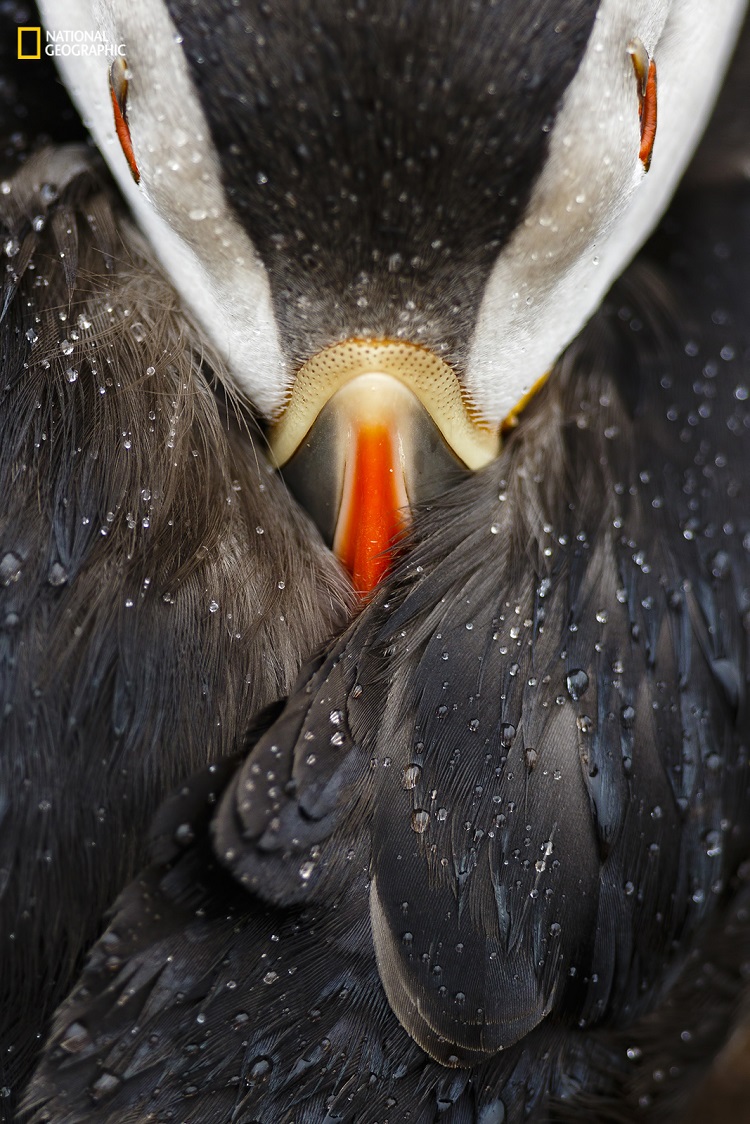 Mario Suarez Porras/2016 National Geographic Nature Photographer of the Year. Puffin studio.
3rd Place—Animal Portraits: This image was taken during the summer of 2015 on Skomer Island, Wales. This island is well known for its wildlife and the puffin colony is one of the largest in the U.K. The photo shows a detail or study of an Atlantic puffin resting peacefully under the rain. As Skomer is not inhabited, puffins do not feel afraid of humans, and people can get really close to puffins. That morning, the conditions were perfect. Both fine rain and a soft light, so much appreciated by photographers, helped to take this picture. In order to get this angle from above the bird, I couldn’t make use of the tripod, as it could disturb the puffin. The photo had to be taken handheld, which added an extra challenge. 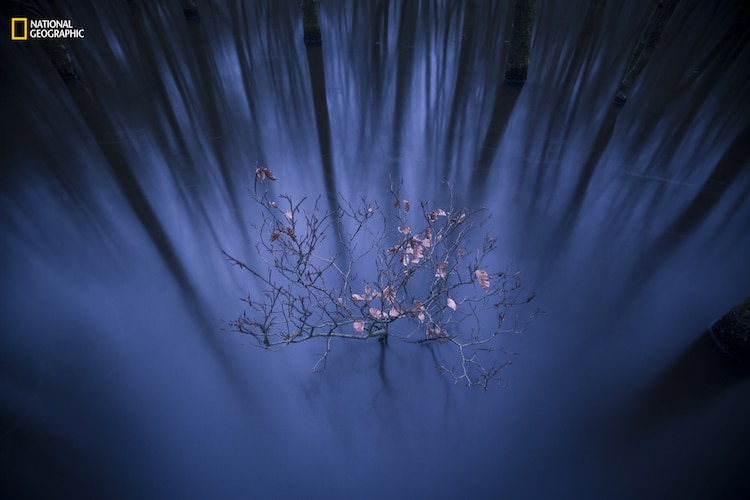 Jacob Kaptein/2016 National Geographic Nature Photographer of the Year. Struggle of life.
1st Place—Landscape: Last year I participated in the Marius van der Sandt Beurs. This scholarship stimulates photography by young photographers. For a whole year I was guided by some excellent nature photographers to realize a project I wanted to accomplish. I chose a natural stream restoration project of a nature organization in the Netherlands. The first time I entered this patch of forest, I immediately saw this little beech. I came back several times to photograph it. One evening, just after sunset, all the light conditions were perfect. I stood in the cold water for more than an hour making many photos while I experimented with different shutter speeds. 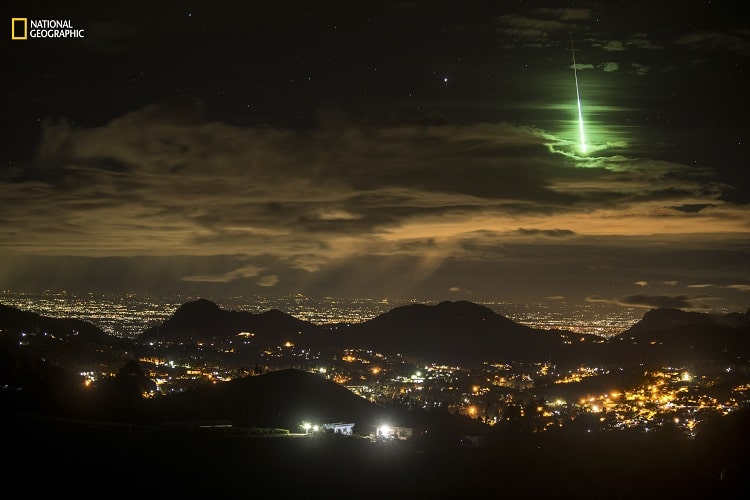 Prasenjeet Yadav/2016 National Geographic Nature Photographer of the Year. Serendipitous Green Meteor.
Honorable Mention—Landscape: Anand Varma was visiting me and I was showing him around a mountain range in South India called the Western Ghats. We camped on the side of a road and I set up my Nikon D600 and a 24-70mm lens to take 15-second exposures. I set the camera to take 999 images. I slept next to the camera and it continued taking pictures until dawn. It wasn't until the next afternoon that I reviewed my images and noticed something unusually bright and green. I showed it to Anand, and we realized that I had captured an extremely rare event. After checking with a few experts, I learned that it was a green meteorite, and getting it on camera is very rare. This is an example of being at the right place at the right time to capture something totally unexpected. For those 15 seconds, I was the luckiest photographer on the planet. 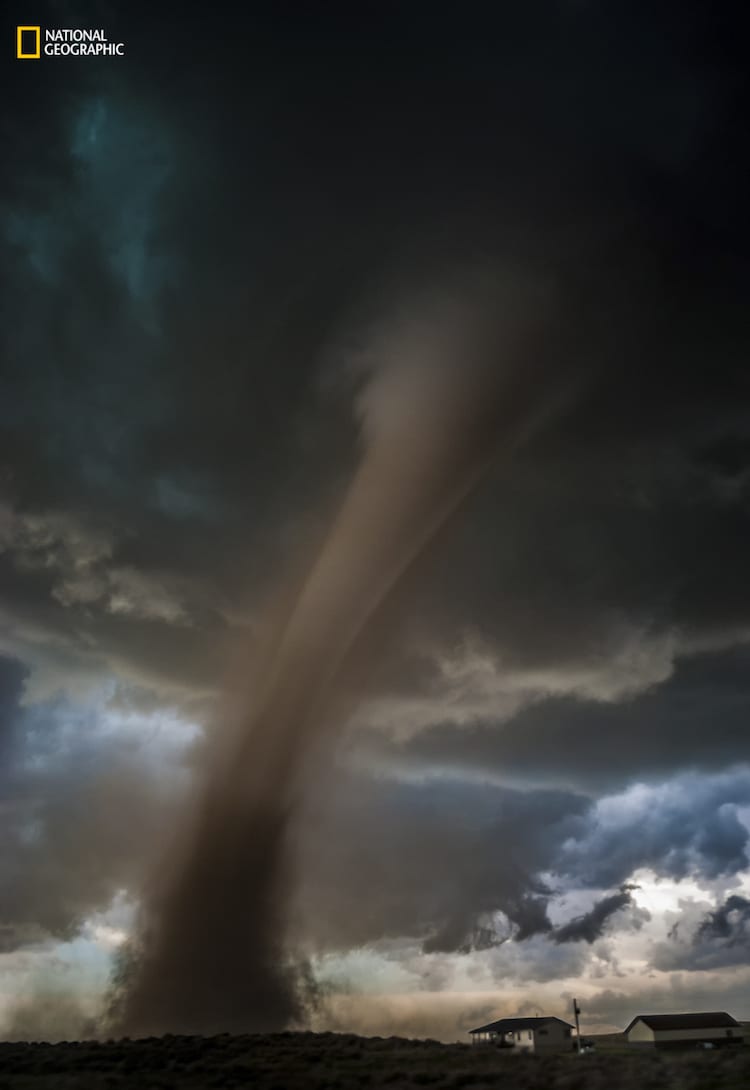 Jacob Kaptein/2016 National Geographic Nature Photographer of the Year. Approach.
2nd Place—Action: An EF2 tornado bears down on a home in Wray, Colorado- May 7, 2016. As soon as we were safe, as the tornado roared off into the distance through a field before roping out, we scrambled up the hill to check on the residents.Thankfully, everyone was alright, and we were grateful for that. As I was checking in with a young woman coming out of the basement, we became very aware of a strong new circulation – right above our heads. We needed to run for cover, and did so before saying a proper goodbye. 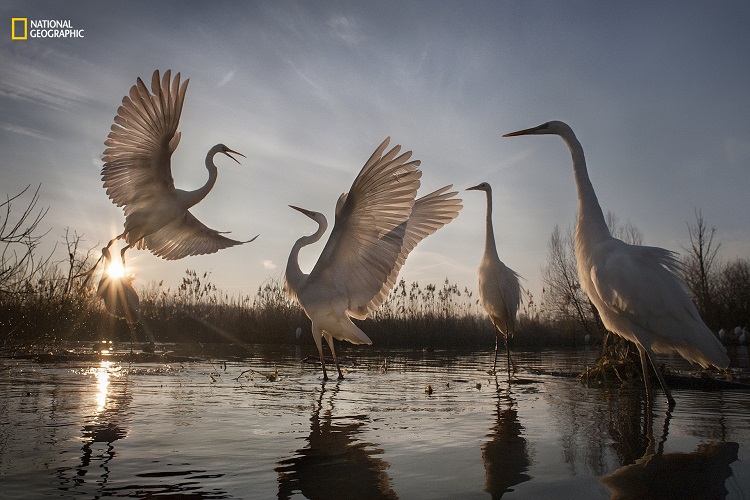 Zsolt Kudich/2016 National Geographic Nature Photographer of the Year. Great Egrets Take Flight.
3rd Place—Action: A remarkable conservation success story, the graceful great egret was saved from the brink of disappearance in Hungary, where in 1921 there were only 31 mating pairs remaining. Less than a century later, international conservation efforts have triumphed. We can now count over 3,000 mating pairs in Hungary alone. Today, although their numbers are continuing to climb, the great egret remains the Hungarian Nature Conservation’s symbol, and they are still considered an endangered species that must be carefully protected. The birds are most active at dawn and dusk, and here they’re squabbling over food and jostling for space in the crowded swamp. 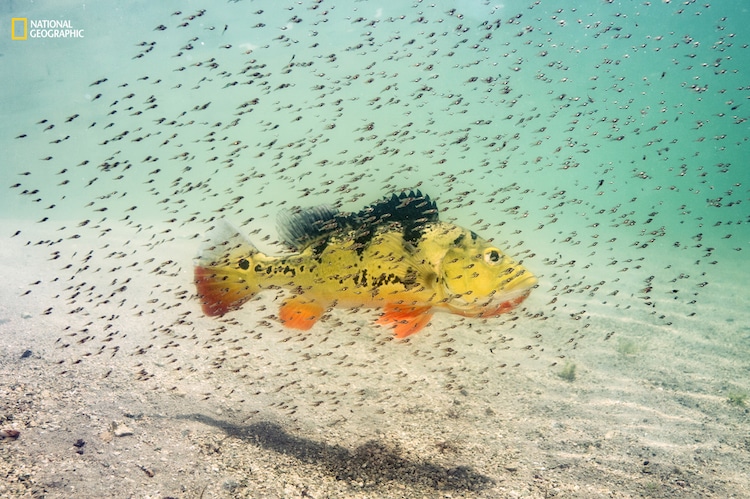 Michael O'Neill/2016 National Geographic Nature Photographer of the Year. Proud Momma.
2nd Place—Animal Portraits: A female peacock bass guards her brood in a Miami, Florida, freshwater lake. She will protect her young fry from a variety of predatory fish until they are large enough to fend for themselves. This tropical freshwater species, also known as the peacock cichlid, was introduced in Florida in the mid-1980s from South America to control the tilapia population, another invasive species. Throughout its native range (and in Florida) it’s a prized sportfish known for its fighting spirit. 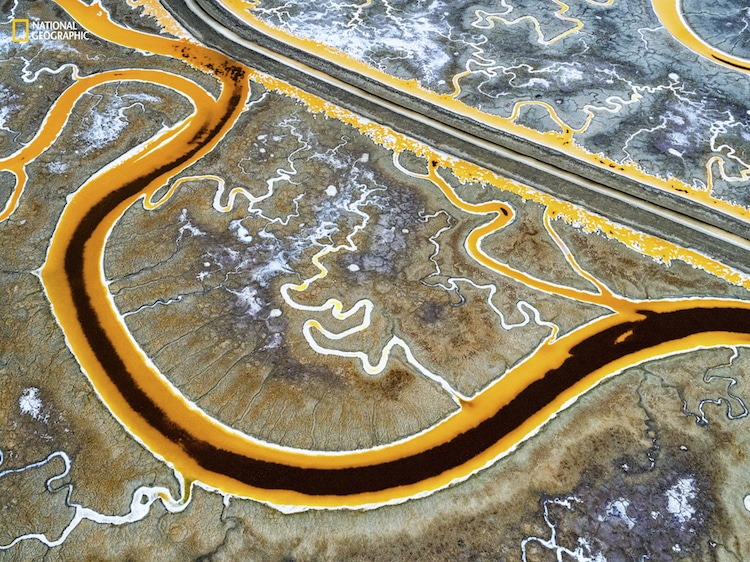 Chris McCann/2016 National Geographic Nature Photographer of the Year. Outside Facebook HQ.
2nd Place—Environmental Issues: Eighty percent of the San Francisco Bay Area wetlands—16,500 acres—has been developed for salt mining. Water is channeled into these large ponds, leaves through evaporation, and the salt is then collected. The tint of each pond is an indication of its salinity. Microorganisms inside the pond change color according to the salinity of its environment. This high-salinity salt pond is located right next to Facebook headquarters, where about 4,000 people work every day. 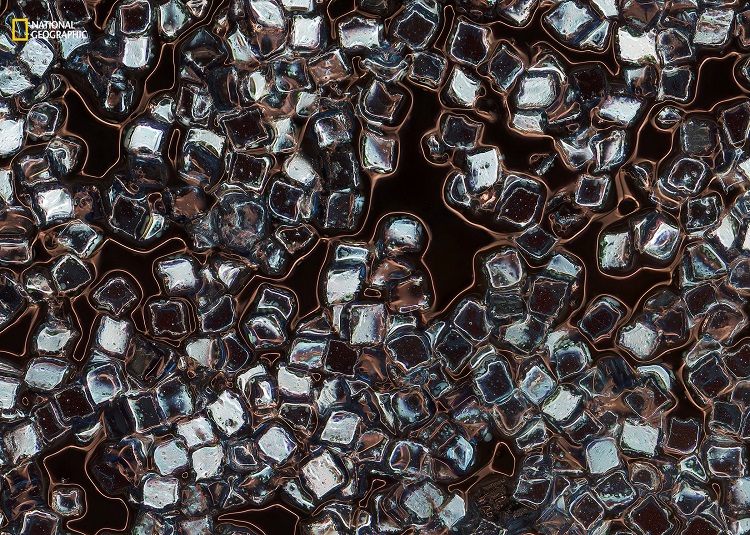 Eleanor Ryder/2016 National Geographic Nature Photographer of the Year. Toxic Vanity.
3rd Place—Environmental Issues:This image is a magnification of plastic particles in eyeliner, exploring just one facet of the synthetic swarm suspended in our oceans. The particles, lash-lengthening fibers, illuminating powders, and glitters these products contain are in fact tiny pieces of plastic. Every time we wash these products from our bodies or ingest them as we lick the glosses from our lips, we unknowingly add to the trillions of microplastic particles currently infesting every level of the ocean. This photograph was taken at Falmouth University in Cornwall, United Kingdom, in May 2016 using a reflective photographic microscope with a stacking panoramic process to create the final image. 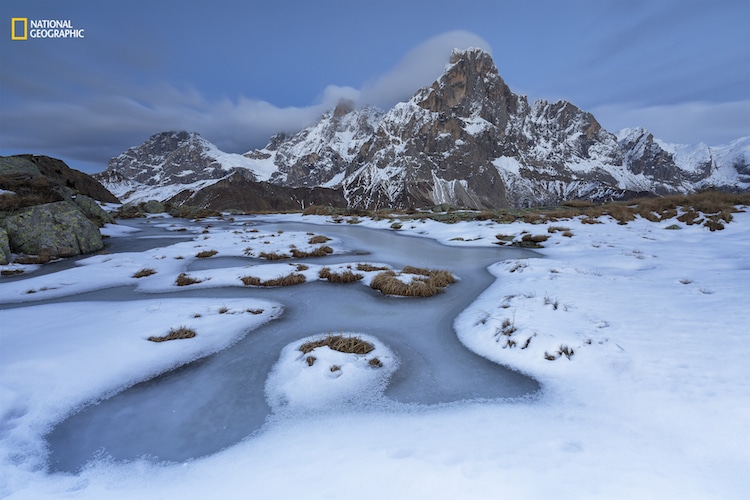 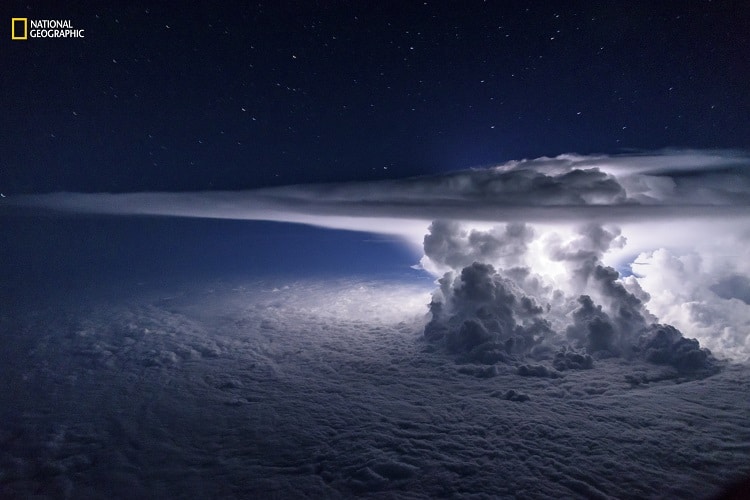 Santiago Borja/2016 National Geographic Nature Photographer of the Year. Pacific Storm.
3rd Place—Landscape: An isolated cumulonimbus storm developed over the Pacific Ocean a few miles south of the coast of Panama City. It sat atop a temperature inversion that created a thick overcast layer of clouds. The strong updrafts of the storm quickly reached the tropopause and spread out, creating the characteristic anvil. The strongest updrafts pierced the tropopause and turned into what scientists call the overshooting tops. The entire frame was lit by a single lightning from within the storm in a moonless night on June 16, 2016.

My Modern Met granted permission to use images and captions by National Geographic.