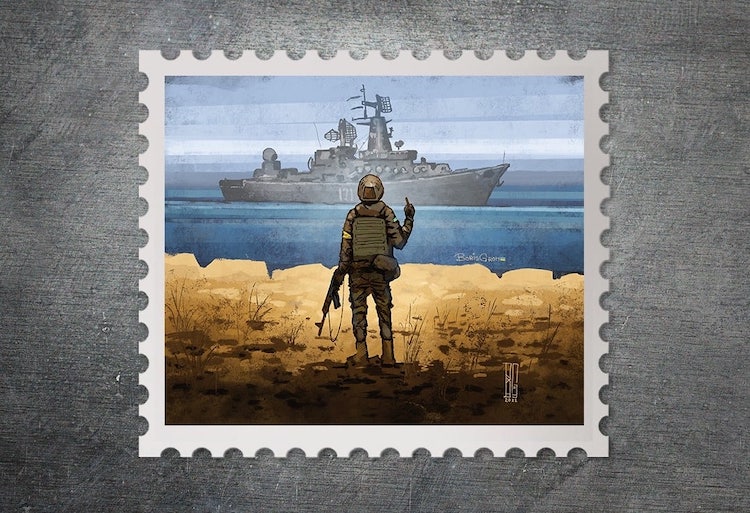 The Ukrainian Postal Service—Ukrposhta—unveiled a new stamp design in defiance of the Russian invasion. Based on the famous events surrounding Snake Island—in which 13 Ukrainian soldiers were recorded standing up to a Russian warship—the stamp is called “Russian warship, go f*** yourself!” It depicts a lone Ukrainian guard rebelling against the Russian naval forces ordering their surrender.

Ukrposhta chose this design by Lviv-based artist Boris Groh through a public vote on Twitter. Groh spent three days drawing his submission despite the harrowing circumstances. He said he was inspired by the Snake Island soldiers' bravery, and wanted to capture the essence of that interaction. Ukraine's deputy foreign minister, Emine Dzheppar announced Groh's winning design and the title via Twitter.

The Snake Island incident was reported on February 24, the first day of the Russian invasion. According to an audio recording from the event, the Russian warship said, “This is a Russian warship. I propose you lay down arms and surrender to avoid bloodshed and unnecessary victims. Otherwise, you'll be bombed.” The Ukrainian soldiers replied, “Russian warship, go f*** yourself.” Afterward, it was believed that the guards were killed in the bombing, but new information suggests that they may still be alive. The combative phrase has since become a Ukrainian battle cry used to bolster morale.

You can purchase the stamp through Ukrposhta when it is available.

The Ukrainian Postal Service, Ukrposhta, unveiled a new stamp based on the events of Snake Island—in which 13 Ukrainian guards stood up to a Russian warship.

The postage stamp named “Russian warship, go f**k yourself!” will appear in🇺🇦. The sketch by artist Boris Groh received the most votes and will soon be published by Ukraine's state postal company.
🇺🇦✌️#StandWithUkraine#StopRussianAgression pic.twitter.com/ByYAzw2tYq

The stamp design was decided by a public vote on Twitter.

Lviv-based Boris Groh's illustration was chosen as the winner. It depicts a lone guard defying the Russian naval forces.

The name of the stamp is “Russian warship, go f*** yourself.” This is what the Ukrainian guards were recorded saying to the Russian warship when it asked them to surrender.

Russians: This is a Russian warship. I propose you lay down arms and surrender to avoid bloodshed & unnecessary victims. Otherwise, you’ll be bombed.

They were all killed https://t.co/uNqh5b9L8C

New information suggests that all of the 13 Ukrainian soldiers could still be alive.

All images via Ukrposhta.