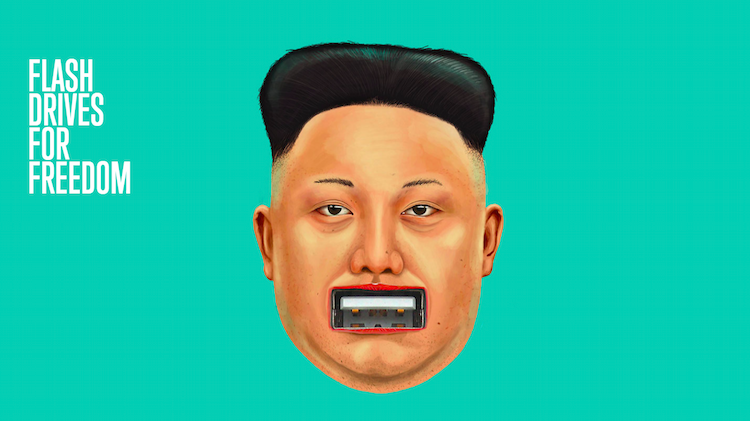 Under the strict communist regime of Kim Jong-un, North Koreans are isolated from the rest of the world. The country's government ban on all foreign media prohibits freedom of speech and the press. Any content its citizens watch on TV, hear on the radio, or read in newspapers is all tightly controlled state propaganda. However, the New York-based Human Rights Foundation recently collaborated with Forum 280 and USB Memory Direct to launch Flash Drives for Freedom, an initiative to help give North Koreans a glimpse of the outside world.

In the age of Dropbox and Google drive, it’s hard to believe that your old USB sticks could be of much use to anybody. However, in North Korea, these pieces of plastic can become a powerful tool. The Flash Drives for Freedom project is calling for USB flash drive donations, which will be wiped and reloaded with western and South Korean movies, e-books, TV shows, and Wikipedia articles before being smuggled into North Korea.

The project hopes to silence Kim Jong-un’s propaganda, which is illustrated in the campaign’s portrait of the dictator. With an oversized mouth used for the USB port, an inserted flash drive looks just like a baby’s pacifier. However, despite the comical appearance, the project hopes to address a serious issue. “We believe that freedom of information is fundamental right. Without accessing information it’s impossible to form your own consciousness,” says Christine Han, Chief Operating Officer at North Korea Strategy Center.

“In a society without internet or independent media, and where the government maintains absolute control over information, these little pieces of plastic filled with films, books, and other content are windows into the outside world,” says the Flash Drives for Freedom website. “Some North Koreans have escaped their country’s dictatorship and found freedom in South Korea—these refugees are also known as defectors. There they have established civil society groups dedicated to sending information back to others.”

So far, around 125,000 USBs have been donated, with 1.3 million North Koreans reached. The Flash Drives for Freedom team estimate they will have smuggled 2.1 million hours of footage into the country by the end of 2018.

Want to help? You can send your USB drives by post, or donate money—100% of the funds go toward buying USB drives in bulk. Find out more about the project on the Flash Drives for Freedom website.

The Flash Drives for Freedom project wants to silence dictator Kim Jong-un’s state propaganda and give North Koreans a glimpse of the outside world.

All images via Flash Drives for Freedom.