8 Modern Spire Designs for the Reconstruction of Notre-Dame 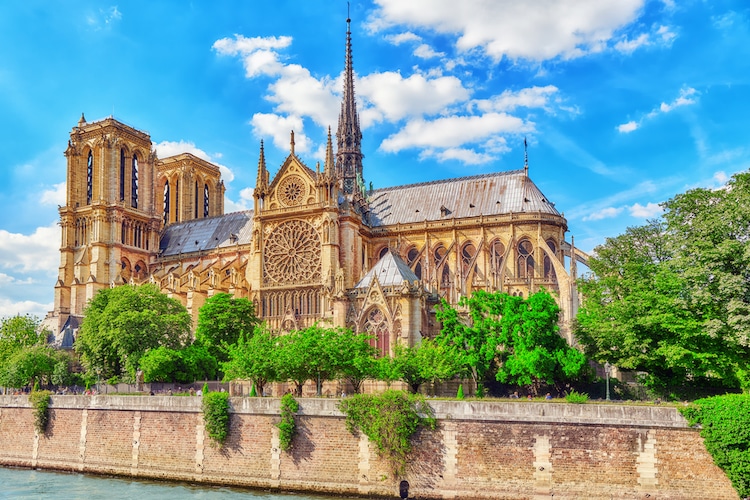 Notre-Dame Cathedral prior to the April 15, 2019 fire. (Photo: Stock Photos from V_E/Shutterstock)

In the wake of the tragic fire that partially destroyed Paris' beloved Notre-Dame Cathedral, the French government has begun thinking about how to move forward. Recently, French Prime Minister Édouard Philippe told journalists that the government would be putting out an international call for architects to propose their ideas of how to reconstruct the roofline and the iconic spire that dramatically collapsed during the fire.

Rather than sticking with tradition, he reportedly said that France wasn't looking for a repeat of what was, but rather “a new spire that is adapted to the techniques and the challenges of our era.” Given the international attention that the fire has received and the incredible opportunity to work on such a historic building, it shouldn't be too difficult to attract high-quality proposals.

In fact, even prior to this announcement, architecture firms and design studios around the globe have been publishing their concepts for Notre-Dame's new spire. Though acknowledging the difficulties of balancing the old and the new, most seem in agreement that the church needs to move forward with the times, just as it did when construction was necessary in the past. Many of the modern designs still pay homage to Notre-Dame's history but use contemporary materials for a decidedly modern look. Let's take a look at some of the most interesting Notre-Dame concepts proposed thus far by architects from around the word.

Acclaimed architect Norman Foster is one of the biggest names to publicly throw his hat into the ring after announcing his intentions in an interview with The Times. Calling the competition “an extraordinary opportunity,” his light and airy proposal calls for a roof and spire formed from crystal glass and stainless steel. Foster, who is perhaps most well-known for The Gherkin in London, applauds authorities for being open-minded with the construction proposals.

“In every case, the replacement used the most advanced building technology of the age,” Foster shares with The Guardian. “It never replicated the original. In Chartres, the 12th-century timbers were replaced in the 19th century by a new structure of cast iron and copper. The decision to hold a competition for the rebuilding of Notre-Dame is to be applauded because it is an acknowledgment of that tradition of new interventions.”

Alexandre Fantozzi of São Paolo-based AJ6 Studio presented a dazzling design that pays homage to Notre-Dame's historic stained glass. In the evening, lights would illuminate the glass roof and spire, creating a kaleidoscope of color in the night sky.

“In Gothic [architecture] there is the connection of the earth to the sky, and inside the Cathedral, the natural illumination multiplies in colors through the filter of the cover in stained glass.” Fantozzi explains.

French architects Godart + Roussel have also proposed a glass roof, but their spire is quite different than many others. An elegant, minimalist spire rises into the sky, giving a nod at what once existed without trying to replace it. Keenly aware that a modern construction could face public opposition, they—like many architects—are pondering the correct outcome for Notre-Dame.

“It is terrifying to realize that even the greatest masterpieces are not imperishable,” the firm writes. “How can a work that has required hundreds of years of work fly into the skies of Paris in a few hours? In addition to the legitimate questions of protection and prevention systems that we are entitled to ask, it is up to us today to know how to revive this architectural gem that is the identity of the most visited city in the world. As architects, we are obviously sensitive to the project of its reconstruction but a question arises: should it be done again the same?”

This sleek, modernized version of Notre-Dame is the vision of artist and architect David Deroo. The undulating forms of the roofline give a nod to the destroyed roof, while the materials provide a contemporary flair. “The future project should be balanced between the old and contemporary architecture,” explains Deroo. 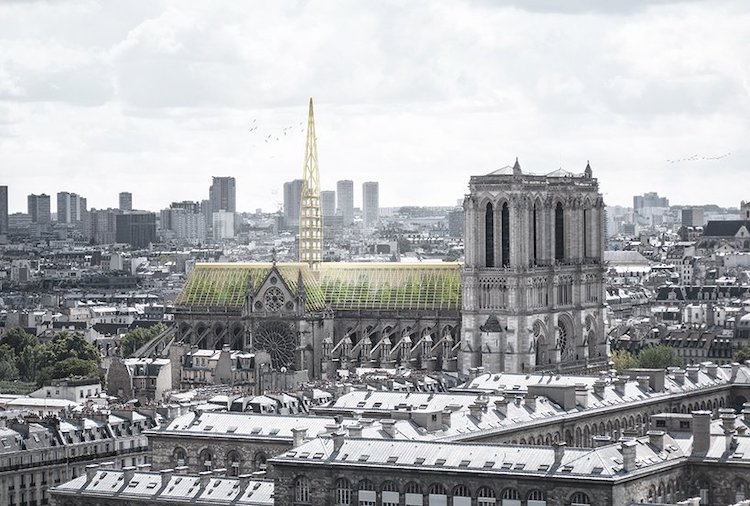 Studio NAB's innovative design would transform the roof of Notre-Dame into an educational greenhouse, while the spire would function as an apiary.  The sustainable design would integrate the cathedral even further into the community. By creating a space for the disenfranchised to enjoy professional development opportunities, as well as workshops for local children, their vision for the space is one of the most radical.

Massimiliano and Doriana Fuksas of Studio Fuksas have created a modern concept that pays homage to the classic Gothic architecture of the cathedral. The high spire was inspired by a Baccarat crystal, with the entire structure made to be illuminated in the evening. In this way, Notre-Dame will remain a clear beacon of Paris, day and night. Fuksas declare that the crystal spire should be taken as “a symbol of the fragility of history and spirituality,” while light is “a symbol of immateriality.”

Slovakian Vizum Atelier has proposed a decidedly unique vision of Notre-Dame. In their concept, a lightweight spire is crowned by a beam of light that reaches toward the heavens. This move to connect heaven and earth is a rebirth of Notre-Dame while still remembering that “during Gothic times builders tried to reach the sky.”

Russian architect Alexander Nerovnya falls in line with many other designers for his glass-topped cathedral. However, his concept features a spire that more closely resembles the destroyed architectural feature. Like many other architects, Nerovnya firmly believes that this is an opportunity to move toward the future rather than try to replace what was lost.

“We know the Cathedral was built from the 12th to the 14th centuries. But we also know that some changes to the design were made in the 13th, 14th, 18th, and 19th centuries. Things change,” he writes. “Notre-Dame will never be the same, no matter how well it's repaired. So why don't we use all our knowledge and architectural achievement to make it better? When people come to see the Cathedral they will feel a powerful connection to the history seeing the ancient and the modern parts together.”