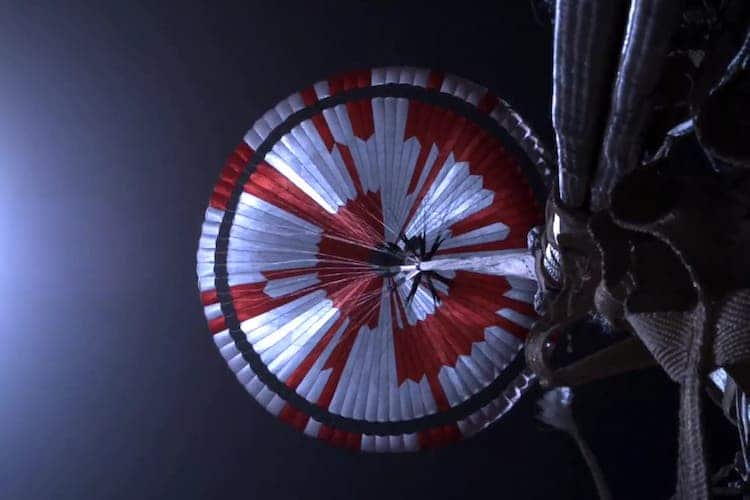 If you consider yourself an amateur detective or a fairly good puzzler, don’t scroll down just yet. Take a look at this photo of NASA’s Perseverance Rover landing on Mars and see if you can decipher the hidden message in the parachute. We’ll even give you a hint: this “easter egg” is related to NASA’s Jet Propulsion Laboratory which worked extensively on Perseverance.

The challenge first hit the internet during a live stream on the Mars landing when a commentator said: “Sometimes we leave messages in our work for others to find. So we invite you all to give it a shot and show your work.” About six hours later the correct answer could be found on Twitter:

The red and white pattern represents binary code where red represents one and white represents zero. Each ring represents one of the words in the phrase. To crack the code yourself, you’ll have to split up the zeros and ones into 10 characters and add 64 to get the ASCII code which will be a letter. On the outermost ring, you can also find the coordinates for NASA’s Jet Propulsion Laboratory in La Cañada Flintridge, California. Adam Steltnzer, chief engineer for Perseverance, went on Twitter to confirm that these clever internet users did indeed crack the code. He also provided a handy diagram to help you understand the placement:

It looks like the internet has cracked the code in something like 6 hours! Oh internet is there anything you can’t do? For those who just want to know: #Mars2020 #CountdownToMars pic.twitter.com/yTJCEnbuLY

The motto and its beautiful rendition on this parachute is a fitting tribute to Perseverance. It is taken from a famous speech by Theodore Roosevelt in which he says: “Far better it is to dare mighty things, to win glorious triumphs, even though checkered by failure, than to take rank with those poor spirits who neither enjoy much nor suffer much, because they live in the gray twilight that knows not victory nor defeat.”

The moment that my team dreamed of for years, now a reality. Dare mighty things. #CountdownToMars pic.twitter.com/8SgV53S9KG