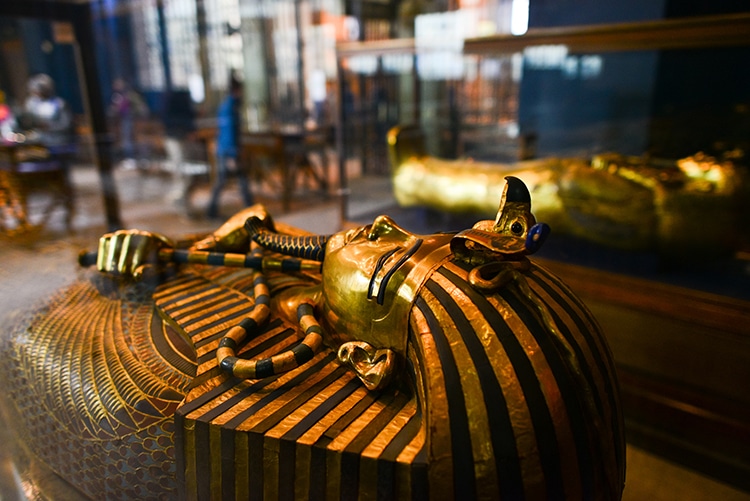 On Saturday, April 3, 2021, citizens of Cairo, Egypt, witnessed a spectacular sight. There was a procession of ancient rulers making their way through the city streets! Called The Pharaohs' Golden Parade, 22 mummies of Egyptian kings and queens went to their new home in the soon-to-open National Museum of Egyptian Civilization. This transfer required much technical planning by the Ministry of Tourism and Antiquities. And instead of keeping the move quiet, the organization created a celebration of Egyptian history and heritage.

Discovered in the late 19th century in the Valley of the Kings in Luxor (ancient Thebes), the royal mummies have since lain in the Egyptian Museum in Cairo. The 18 kings and four queens will next be on view beginning April 18, 2021, in the Royal Hall of Mummies at their new museum.

Although the institutions are only three miles apart, transporting the mummies was no easy feat. To ensure the preservation of Egypts' ancient royals, sections of streets were repaved to ensure smooth surfaces. The mummies were also placed in nitrogen-filled boxes for stability. The vehicles carrying the coffins were even equipped with special shock absorption to protect the mummies from heavy jostling.

To honor the ancient rulers and celebrate Egypts' heritage, The Pharaoh's Golden Parade was created as an outdoor spectacle to surround the necessary transfer. With production design by Mohamed Attia, teams of skilled craftsmen, and the vocals of Egypts' leading ladies, the parade covered many aspects of Egyptian culture. The vehicles of the parade proceeded in chronological order of the rulers they carried, whose names were also emblazoned on the sculpted decorations of each modern “chariot.” Performers in ancient dress and a full orchestra completed the parade. The magnificent spectacle was well-received across the world—even becoming one of the most talked-about topics on Twitter.

The royal mummies arrived safely and will be on view beginning April 18, 2021, at the National Museum of Egyptian Civilization.

On April 3, 2021, 22 royal mummies were moved through Cairo in a celebration of Egyptian history and heritage known as The Pharaohs' Golden Parade.

The royal mummies were carried on specially crafted cars in chronological order.

The mummies will be housed in the new National Museum of Egyptian Civilization.