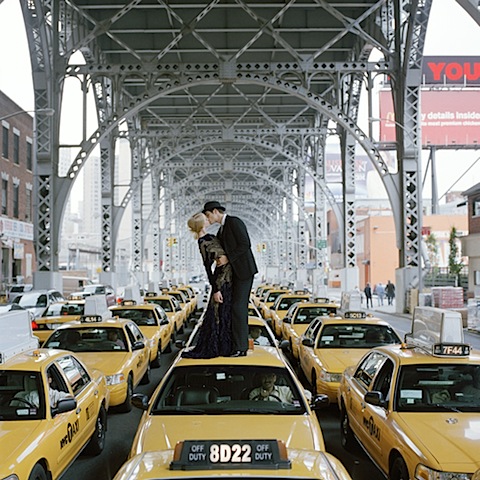 One of the best things about the internet is that you get to read what inspires creative people. A little part of me gets so excited to share these things, with you, that sometimes I can't type fast enough. Today, I've learned that one of my favorite photographers (and yes, I have many), Rodney Smith, has decided to start his own blog and what a delight it is to read his first entry. In it, he describes the concept behind one of the most magnificently romantic photos I've ever seen. The blog is essentially a sneak peek into his new book The End which comes out in the Fall. Every Monday morning Rodney will share a picture from that book and then “pontificate on the photographic prowess that possess each picture.” The limited edition book will retail for $750 (but you can order it now for $600). “This was originally shot for New York Magazine in the summer of 2008. The original concept was to create an essential New York picture and incorporate the great New York icon, the yellow taxicab. That was my only direction. The first step: location. One of the problems finding a location to shoot 30 cabs in New York City is finding space, and then getting permission. After much searching, and several failed attempts, we found ourselves at 125th street underneath the west side highway. The second step: logistics. It was a long and arduous process arranging to have 30 cabs at the right place at the right time, perfectly placed for a seemingly whimsical photograph. After that, shooting the picture was very simple. The whole story was about this couple in love. Placing them on top of the cab was my idea. Again, shooting the picture was the easy part. Throughout my 40 years of photography, the hardest part is always finding the perfect location, and then the production involved in making it happen. The second thing–which has to do with photography in general, not only this one photograph–is composition. Composition is to photography what rhythm is to music. It is about symmetry and proportion, resonance between the photographer and subject; where everything fits just so. Almost like iambic pentameter in poetry, or natural cadence and body rhythm. To me this picture represents not only everything in its right place, but also the right proportions, the right relationships, the right cadence. Composition is seriously lacking in most photography in the 21st century. It has been abandoned–whether due to lack of skill or lack of interest I'm not sure. It seems to me losing a sense of composition is synonymous to having an irregular heartbeat.” Hop on over to his blog every Monday to see new entries from Rodney Smith. Related: Love and Romance – Rodney Smith (10 Photos)