Fascinating Chart is a History of Books that Predict the Future 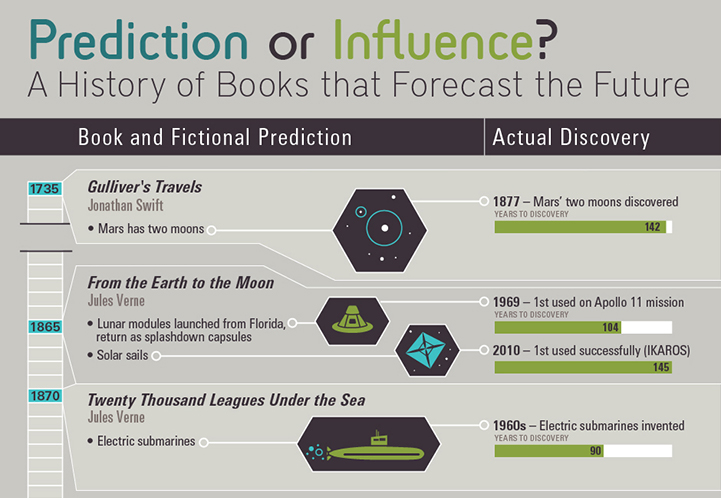 It's often said that art imitates life. But, if the infographic Prediction or Influence? A History of Books that Forecast the Future is any indication, it could certainly be the opposite. The UK-based company Printer Inks compiled a list of books ranging from 1735 to 1990. In them, each author makes their own declarations on the future. Prediction or Influence tracks, in years, when these things were actually realized or invented.

Sometimes, writers' predictions were far off. From the Earth to the Moon by Jules Verne posited that in 1865, we'd have solar sails. In reality, they weren't successfully utilized until 145 years later in 2010. Other books were more accurate in their timeline. Stand on Zanzibar by John Brunner said that in 1969, we'd have satellite TV. He wasn't far off. Just three years later, in 1972, was the first North American satellite TV transmission.

It's fascinating to study this infographic and to marvel at the creativity of fiction writers. They thought of some of the most now-ubiquitous things, like on-demand TV or in-ear headphones. The chart also makes us wonder – where does inspiration come from? Was the world influenced by the work of authors, or are these examples a series of awesome coincidences?