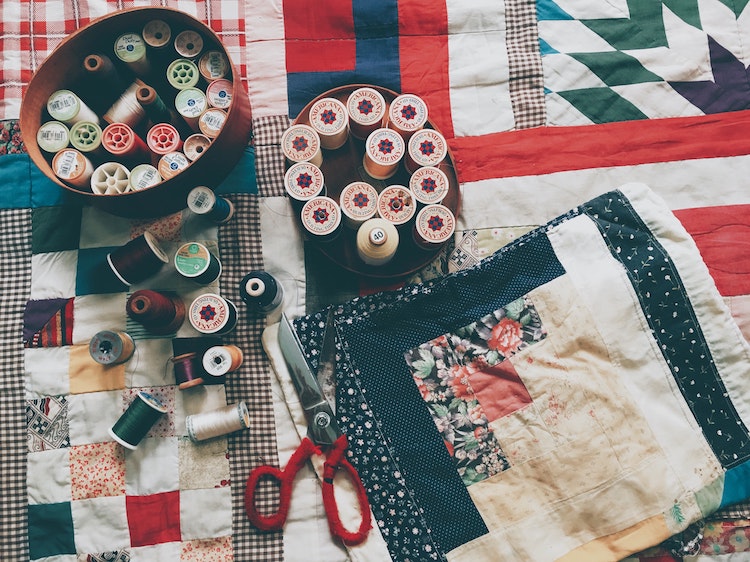 Photo: Dinh Pham
This post may contain affiliate links. If you make a purchase, My Modern Met may earn an affiliate commission. Please read our disclosure for more info.

There are some objects that are so commonplace in our everyday lives that we hardly give them a second thought. A quilt is likely one of those items. Many of us have probably snuggled up with a handmade quilt at some point in our lives; maybe you have one that was passed down from a relative. But how much thought have you given to how they are made and their history? Quilts, like many forms of textile art, can trace their roots back to ancient eras, and their traditions are kept alive by contemporary crafters.

What is a Quilt?

Although most of us have probably seen—or wrapped yourself in—one of these blankets, you might not know what makes a quilt a quilt. It’s a multi-layered textile that comprises three layers: a woven top cover, a middle layer of batting or wadding, and a woven back. Through the technique of quilting, the three sections are sewn into one cozy cloth.

The decorative aspects of the textile vary. In a whole cloth quilt, a single piece of fabric is used for the top of the blanket. The over stitching on this fabric then becomes part of its design.

Another—more common—approach is a patchwork design. In this case, a large image is composed of smaller pieces of pattern and color.

The history of quilting goes as far back as 3400 BCE. Unfortunately, remnants of these quilts don’t exist, but historians can tell by drawings that quilts were part of the culture from that long ago. There is a carved ivory figure in the British Museum of an Egyptian pharaoh who appears to be wearing a “quilted mantle.”

Quilting in the United States

Although quilting has existed around the world, it really took off in the United States starting in the late 17th century. During this time, Americans of varying social classes made and owned quilts. They functioned as both a way to stay warm as well as an expression of folk art.

The advent of the industrial revolution ushered in an even more dramatic change in the way quilts were produced. By the 1840s, textiles could be produced on a broad scale and saved women from spinning and weaving their own fabric. The invention of the sewing machine also made it faster to make produce quilts. 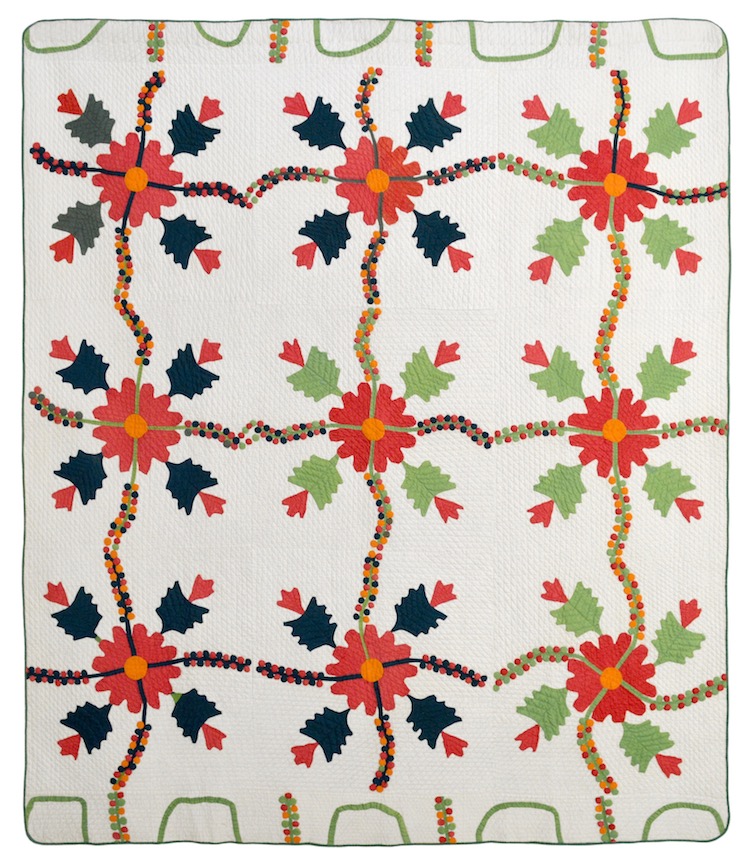 Quilting is intimately tied to American history in unexpected ways. The Civil War is one example of this. Leading up to the war, quilting was used as a means to raise funds for the abolitionist movement. Abolitionists would hold fairs where they sold the blankets, which often shared anti-slavery poems and sayings on them. In addition to fundraising, it’s said that quilting aided in the Underground Railroad. (Historians, however, are divided on the veracity of these claims.) The appliqué symbols supposedly had special meanings that were displayed by hanging the quilt outside on a clothesline. A log cabin, for instance, signified that it was a safe house for a slave as they fled to freedom.

A Civil War-era quilt made in 1867, by Lucinda Ward Honstain is known as the most expensive quilt ever sold at auction. The Reconciliation Quilt was bought for $264,000 in 1991, and later donated to the International Quilt Study Center and Museum at the University of Nebraska-Lincoln. The quilt consists of 40 unique blocks depicting scenes of hope and compassion. Just amazing! #quilt #history #auction #reconciliationquilt

The famous Reconciliation Quilt, sewn in 1867 by Lucinda Ward Honstain, demonstrates how this type of textile can be used to chronicle history—both personal and political. Her impressive quilt comprises 40 appliqué illustrations that share her history. Honstain had a home in Williamsburg, Brooklyn and her family owned a dry goods business. Within these separate images, she also illustrates the end of the Civil War. They are seen in two panels; one features the Confederate president Jefferson Davis being freed from imprisonment while another features a black man talking to a white man on horseback stating, “Master, I am free.”

The Quilts of Gee's Bend

One of the most enduring examples of quilting, a result of the Civil War, is known as the Quilts of Gee’s Bend. The area, officially called Boykin, is an isolated and rural community in Alabama. Named after slave owner Joseph Gee, he established a cotton plantation in the area in 1816. Gee left in 1845, and the property was sold but the name stayed (as did the slavery). 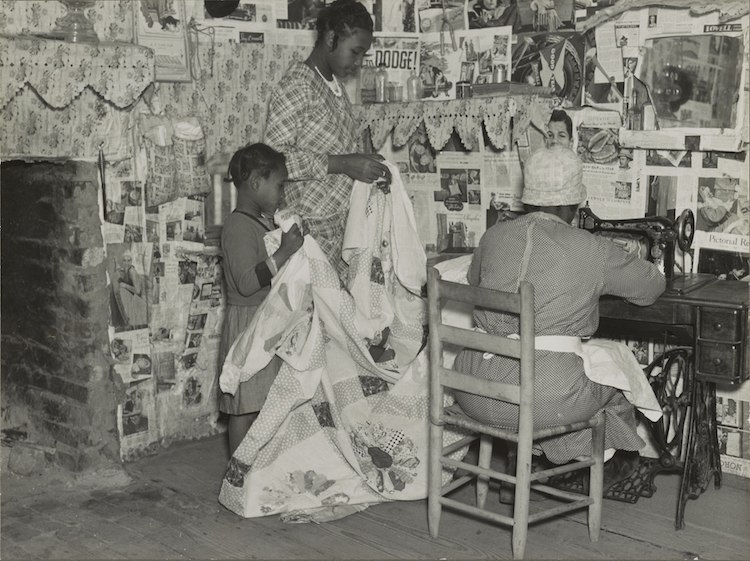 After the emancipation, many family members and slaves remained on the land as sharecroppers. Things began to change in the 1930s. The merchant who supplied credit to these people died, and the person who took over the debt did so by taking Gee's Bend's food, animals, and more. As a result, those who resided in the area lacked many necessities like electricity. Quilts were an integral part of keeping the community warm. 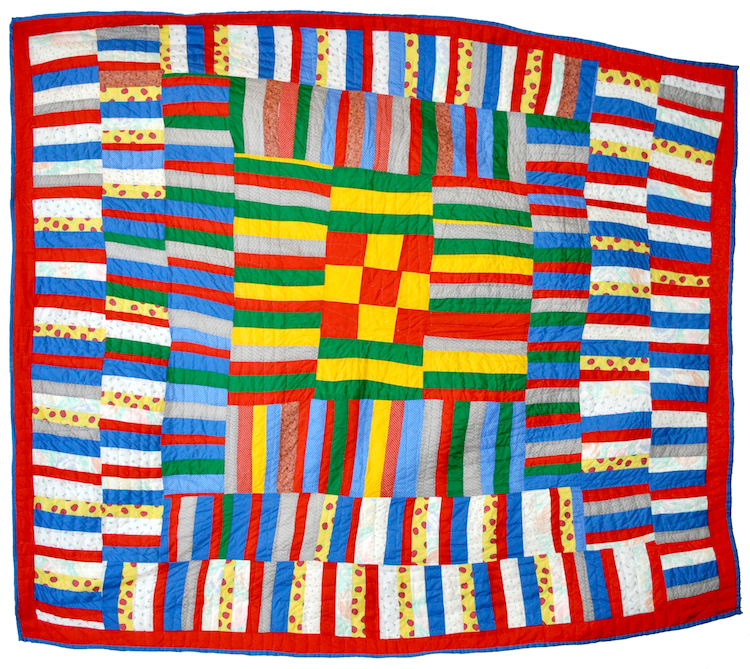 Quilt made by Lucy Mingo in 1979.
Photo: Billvolckening [CC BY-SA 4.0 ], from Wikimedia Commons

Gee’s Bend quilts have gained attention for their notable style. They feature a minimalist aesthetic that is geometrically simplistic and “improvisational.” Not everything matches, which might be because they were forced to use the materials that they had on hand, such as old clothing and textiles.

The tradition of Gee’s Bend still exists today. In 2003, more than 50 quilt makers founded the Gee’s Bend Collective that is owned and operated by the women of Gee’s Bend. They collaboratively work on quilts and host retreats where they share their techniques.