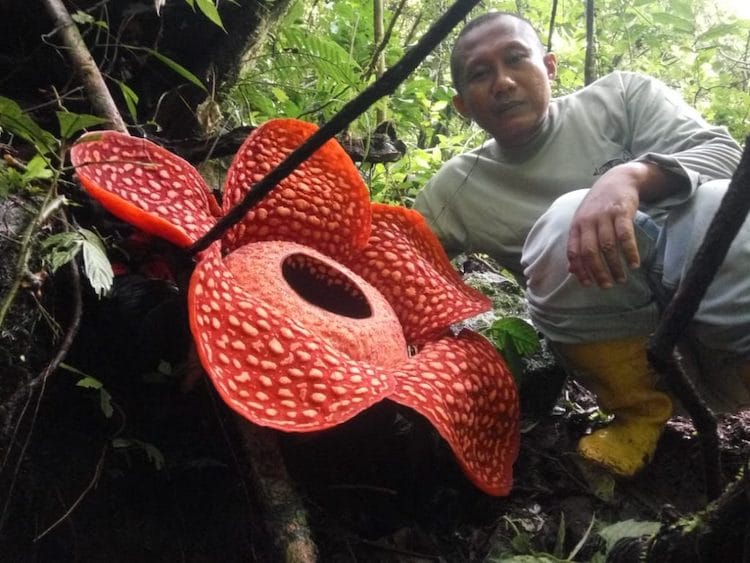 Deep in the forest of West Sumatra, a strange parasitic flower bloomed just as the year came to an end. Measuring in at nearly 44 inches in diameter, this giant Rafflesia tuan-mudae is the largest bloom ever recorded. Also known as a corpse flower, it is one of 28 species in the Rafflesia genus. Its nickname comes from the incredible stench the plant gives off as it blooms.

Found throughout Southeast Asia, Rafflesia are most common to Borneo and Sumatra. In fact, the record-breaking Rafflesia was recorded in the Maninjau Natural Reserve in West Sumatra. Interestingly, these flowers have no roots or leaves. They are parasites living off their hosts, which happen to be vines from the Tetrastigma genus. (In fact, this exceptionally large Rafflesia uses the exact same host as the previous record holder. That bloom, which measured about 42 inches, was recorded in 2017.)

The parasitic plants embed themselves into the tissue of the vines and feed off of their water and nutrients. Unlike other types of Rafflesia, which can bloom in vines hanging from the air, the R. tuan-mudae sticks to the ground, making its presence known only when its petals unfurl. 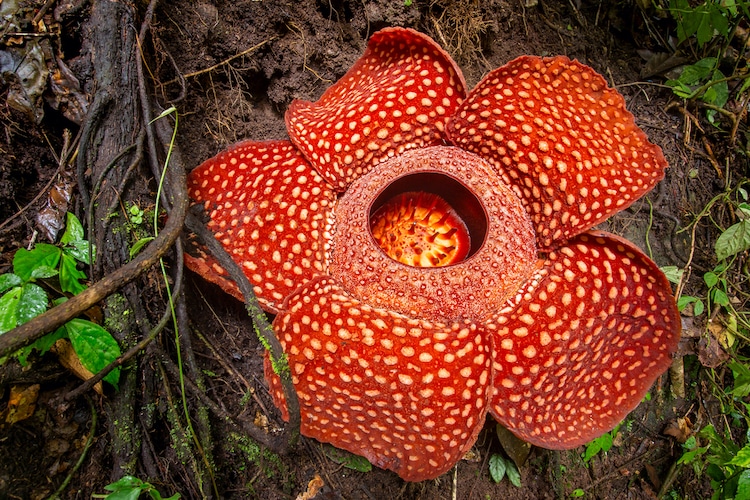 “Rafflesias attach to the body of another, and grow at the expense of that plant,” explains biologist Ross Koning, who manages the greenhouse at Eastern Connecticut State University. “They can’t flower until they’ve gotten enough energy from the host, so these plants flower very rarely, and you have to hunt them.”

While a Rafflesia in bloom is a sight to see, it comes with an unfortunate consequence—the foul odor. This rotting meat smell is meant to attract flies—their main pollinators. This is particularly important as these plants don't bloom often and, when they do, the flower only lasts for one week before dying off.

Given the unfavorable odor it emits, it makes sense that this bloom is referred to as a corpse flower. However, Rafflesia isn't the only flower to be called a corpse. Though they are only distantly related, the more commonly known corpse flower is the Amorphophallus titanum. These enormous plants only grow in the wild in Sumatra but can be found in botanical gardens around the world. While also giving off the smell of rotting flesh when in bloom, A. titanum is much easier to cultivate as it only requires a pot with adequate space to grow.

So if you ever stumble upon either of these plants and are feeling adventurous, you can take a whiff… but be forewarned, it's not for the faint of heart.

The Rafflesia is a parasitic flower found in Southeast Asia that gives off an awful stench when it blooms. 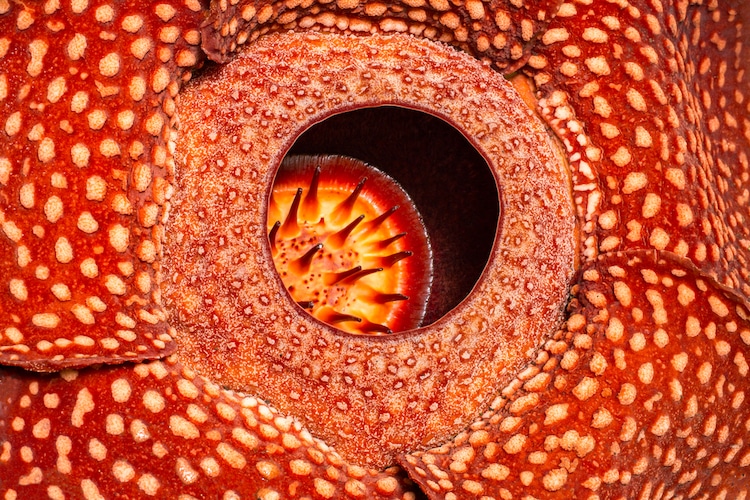 This has earned it the nickname of “corpse flower.” 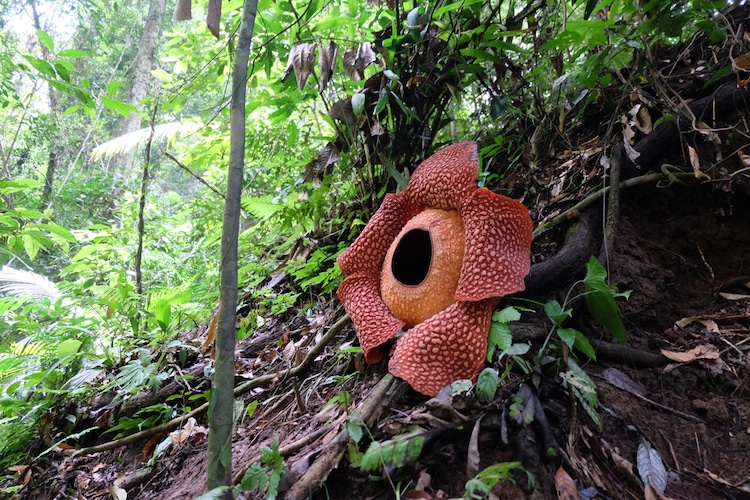 One recent bloom was measured at nearly 4 feet in diameter, making it the world's largest recorded flower. 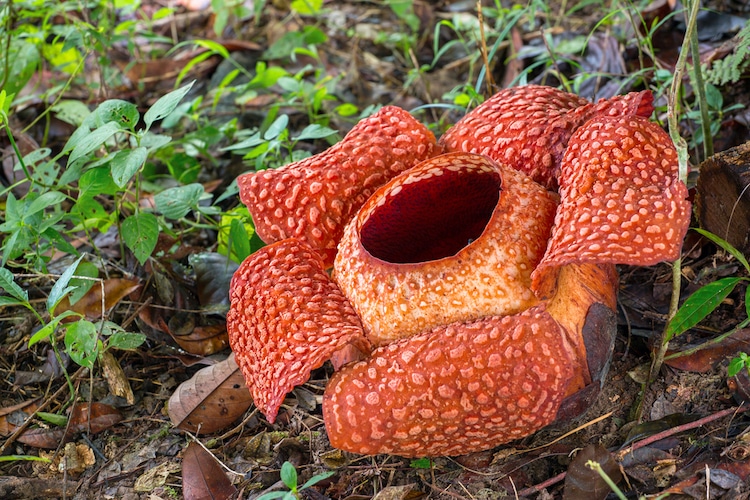 Another type of corpse flower, Amorphophallus titanum, can be found in botanical gardens around the world. 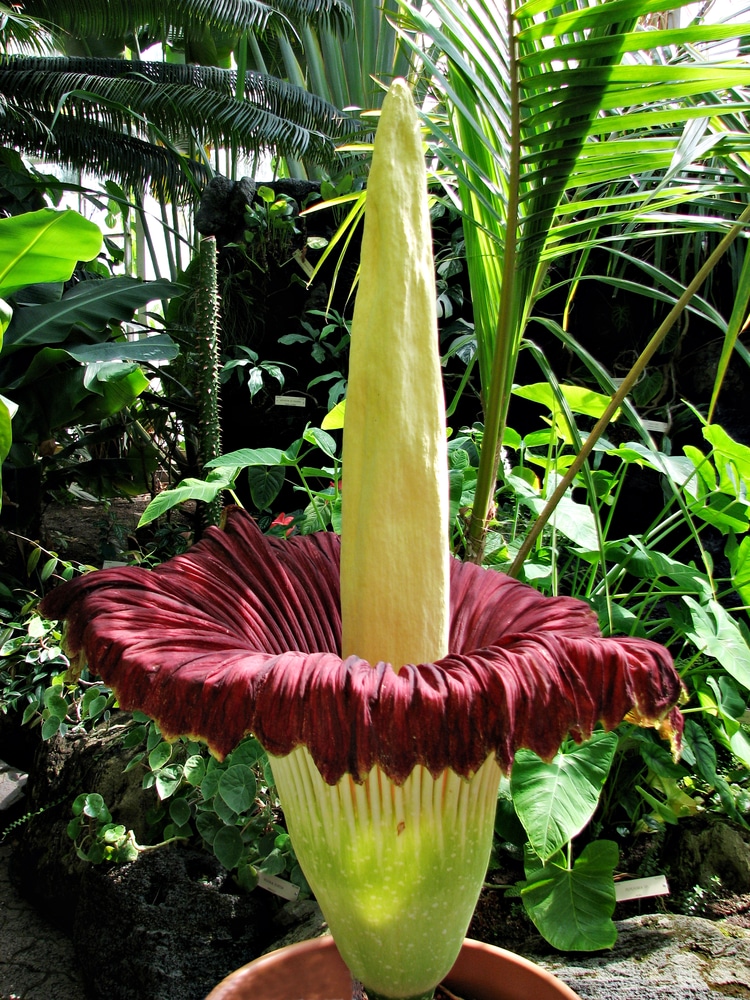 Wondrous World of Flowers That Look Like Something Completely Different