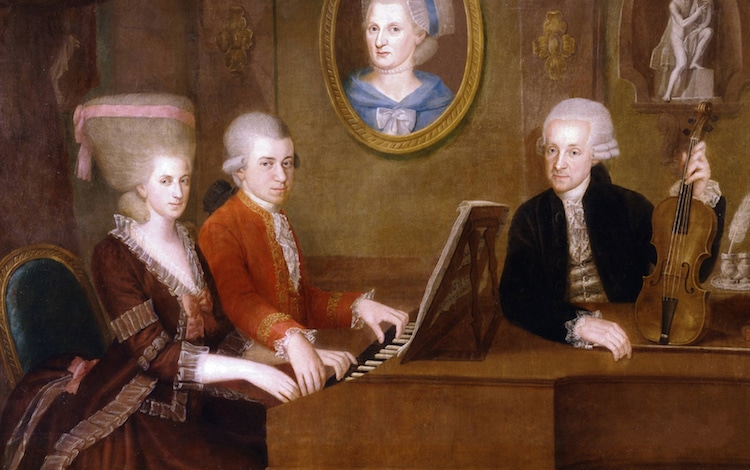 “Wolfgang Amadeus Mozart with his sister Maria Anna and father Leopold, on the wall a portrait of his dead mother Anna Maria” by Johann Nepomuk della Croce. ca. 1780. [Public domain], via Wikimedia Commons
This post may contain affiliate links. If you make a purchase, My Modern Met may earn an affiliate commission. Please read our disclosure for more info.

The premier composer of the classical era, Mozart has inspired artists for centuries. From inspiring films to literature, the public has always been fascinated by the composer's life and times. So, there's nothing more appealing than the thought of hearing Mozart's music played on the original instrument where they were composed.

And that's where Robert Levin comes in. The acclaimed classical performer and composer is an expert in Mozart. In fact, he's even reconstructed or completed several unfinished works by the 18th-century composer. Currently, Levin is the first Hogwood Fellow at the Academy of Ancient Music and, as part of his fellowship, is embarking on a special project. He'll be recording Mozart's music played on Mozart's pianoforte. Yes, the original.

The pianoforte dates circa 1782 and was used by the musical genius for composing and performing up until his death in 1791. Made in Vienna by famed piano maker Anton Walter, the pianoforte is two octaves shorter than a modern piano and is much lighter and smaller. It weighs just 187 pounds and measures 7.3 feet long. The pianoforte is now in Salzburg, at Mozart's house, which has been turned into a museum.

For Levin, it's a thrilling opportunity to play the instrument Mozart used to compose over 50 pieces. “The voyage and discovery of playing on period instruments is to move in a world—physical, emotional and aesthetic—that is inhabited by the geniuses that wrote this music. It brings us very, very close to them,” Levin shared.

Take a listen as Levin plays Mozart's light and lyrical Sonata No. 17 in B flat major KV 570 and discusses the magic of playing on the composer's own instruments. Then, if you want to dive further into Mozart, there are more than half a million classical music scores available free online or, if you enjoy Levin's artistry, we suggest his 2000 recording of Mozart's Piano Concertos No. 5, 14, 16.

Ever wonder what Mozart's music sounded like on his original pianoforte? Watch this video of Robert Levin and find out.

Famous Classic Composers Made of Their Own Music

Love Mozart? Share
Like My Modern Met on Facebook
Get Our Weekly Newsletter
Become a
My Modern Met Member
As a member, you'll join us in our effort to support the arts.
Become a Member
Explore member benefits
Love Mozart?