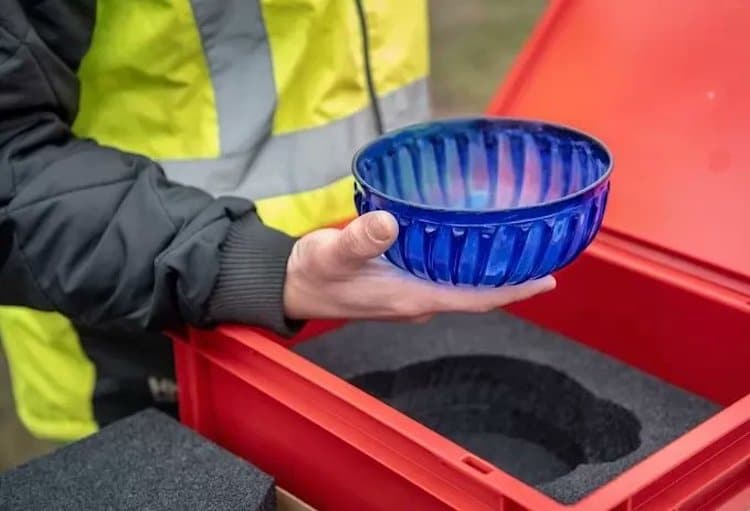 At the height of its power, the ancient Roman Empire spread well beyond Italy, reaching Spain, Britain, and Germany. Archaeologists are still uncovering remnants of this powerful civilization, including luxurious villas and lost roads. And while most of these discoveries are found in broken fragments, a lucky team of archaeologists in the Netherlands uncovered a rare Roman glass bowl in perfect condition.

The 2,000-year-old object was excavated in Nijmegen—the oldest city in the Netherlands that was originally settled by the Romans as a military camp. Archaeologist Pepijn van de Geer and his team uncovered the medium-sized bowl without any chips or cracks, and quickly determined that it was “of Roman manufacture” and most likely made in a glass workshop in Germany or Italy. It features a deep blue color, with a ridged texture along the sides.

“Such dishes were made by allowing molten glass to cool and harden over a mold,”  Van de Geer tells the Dutch regional newspaper De Stentor. “The stripe pattern was drawn in when the glass mixture was still liquid. Metal oxide causes a blue color.” In addition to the bowl, archaeologists uncovered other findings that shed light on Roman living, like homes, wells, everyday objects, jewelry, and even graves.

A blue Roman glass bowl was uncovered in Nijmegen, Netherlands—an ancient city that used to be a Roman settlement. It is estimated to be about 2,000 years old.

A Roman glass bowl has been unearthed perfectly intact by Dutch archaeologists in Nijmegen. https://t.co/wQodqtJSJu pic.twitter.com/M7PhVuvW5J

All images via Bert Beelen.