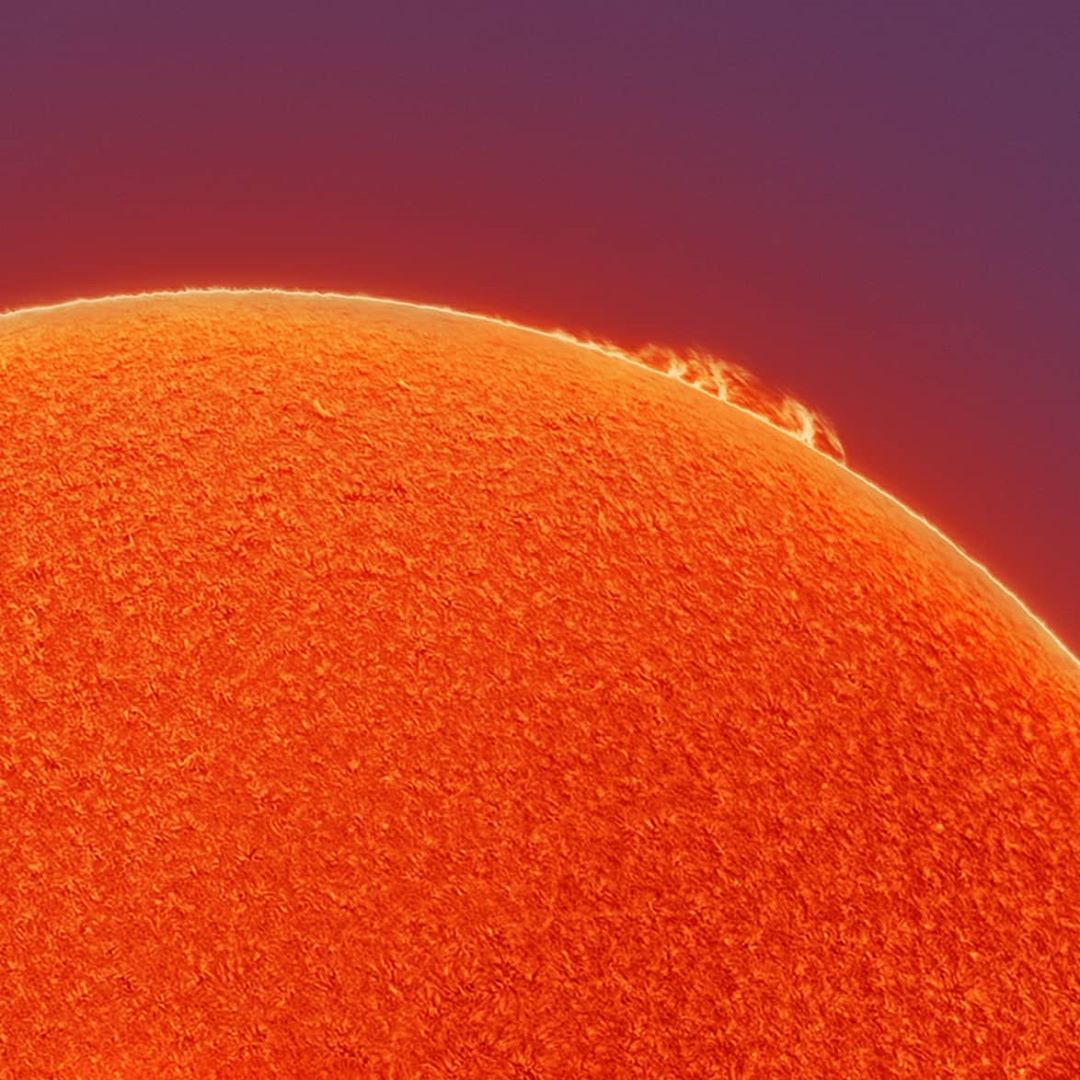 Backyard astrophotographer Andrew McCarthy is known for his spectacular photographs of the moon, but this time he aimed his lens at a different celestial body. Using all of his skill and experience, McCarthy has managed to capture some incredible views of the Sun.

While you should never look or aim a regular camera at the Sun—your eyes and equipment are likely to get damaged—McCarthy uses a special setup in order to get a close-up view of the enormous star. Working with a Solar Max III telescope (which is equipped with special solar filters) as well as a monochrome camera and equatorial mount, McCarthy was able to capture extraordinary details of the Sun.

In the photo, we see an enormous solar prominence, which only looks small due to the immense size of the Sun. These clouds of gas extend from the Sun's outer shell, the photosphere, through the solar corona. Looking like pieces of lava whipping about, they're made from plasma—a hot gas made of electrically charged hydrogen and helium. This plasma is held into place by the Sun's magnetic field, though pieces can occasionally break off in an event known as a coronal mass injection.

McCarthy's photograph and video, which he posted on Instagram, shows the dynamic plasma as it dances above the Sun's surface. The movements are both volatile and hypnotic. It was a great find for McCarthy, who checks the Sun's weather daily via a network of Solar Telescopes.

“On this day I could see there was a particularly large prominence forming on the southern limb (flipped to the top in my image as an aesthetic choice),” McCarthy tells My Modern Met. “This was the widest one I've ever seen, wider than Jupiter. They can get much larger during a ‘solar maximum',  but we've been in a solar minimum for two years, so these events are rarer and milder.”

See this image, and many others, in high resolution on McCarthy's Patreon and find prints for sale via ImageKind.

Andrew McCarthy captured stills and video of a solar prominence from his backyard using specialized equipment.

Wowed by the photo? Share
Like My Modern Met on Facebook
Get Our Weekly Newsletter
Become a
My Modern Met Member
As a member, you'll join us in our effort to support the arts.
Become a Member
Explore member benefits