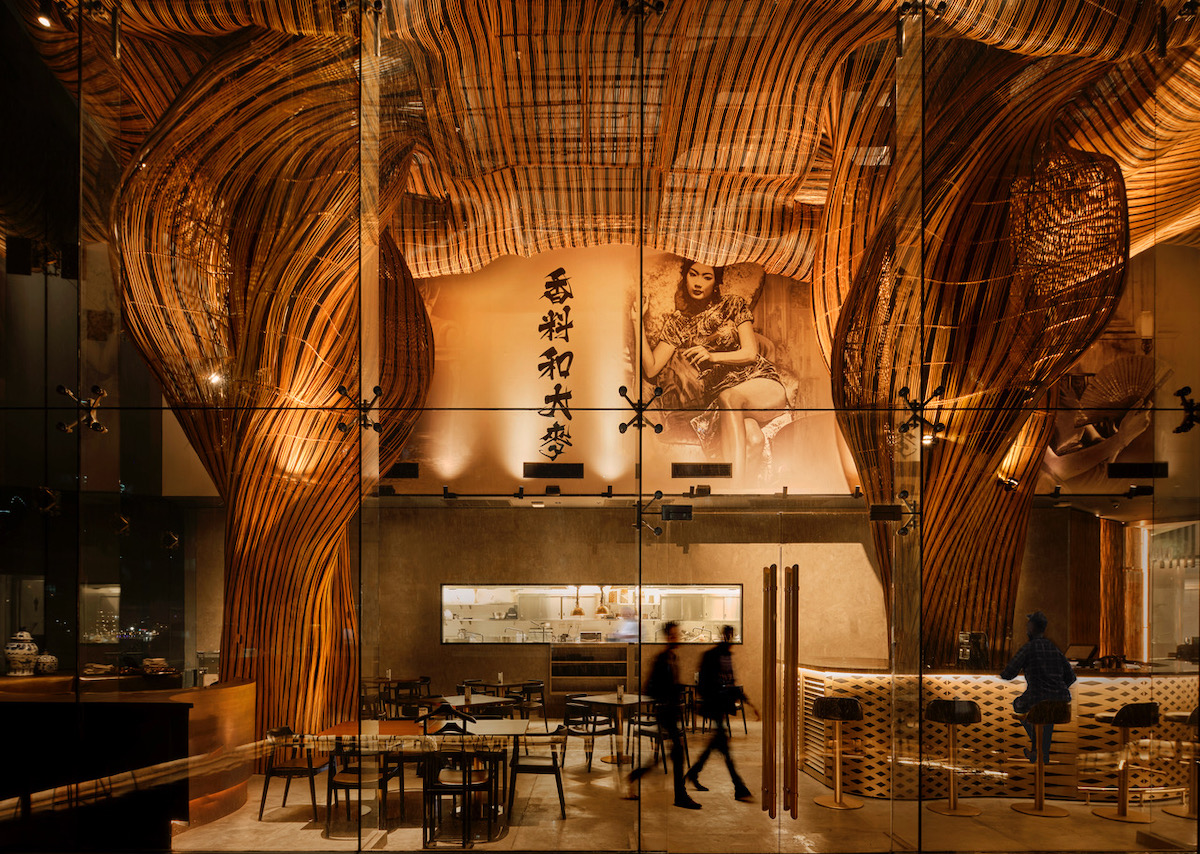 You might not give the columns in a building more than a passing glance, but that will change when you enter Spice & Barley. The Bangkok restaurant is filled with impressive rattan columns that complement the warm interior color palette. Architects Enter Projects Asia designed the structures using parametric digital modeling technology in conjunction with traditional craft knowledge of rattan—a renewable material made from plants that is often used to create woven baskets.

Minor International commissioned the Spice & Barley project to convey “Asian fusion” and connectedness of different ideas, making Enter Projects an ideal choice of designer. The close relationship between technology and artisanal craft is a critical design methodology for the firm; they explain that “by using cutting edge software to generate new and exciting building forms we have effectively realized the potential of new technology in the creative environment; creating buildings that are perfectly appropriate to the environment and the information age.” 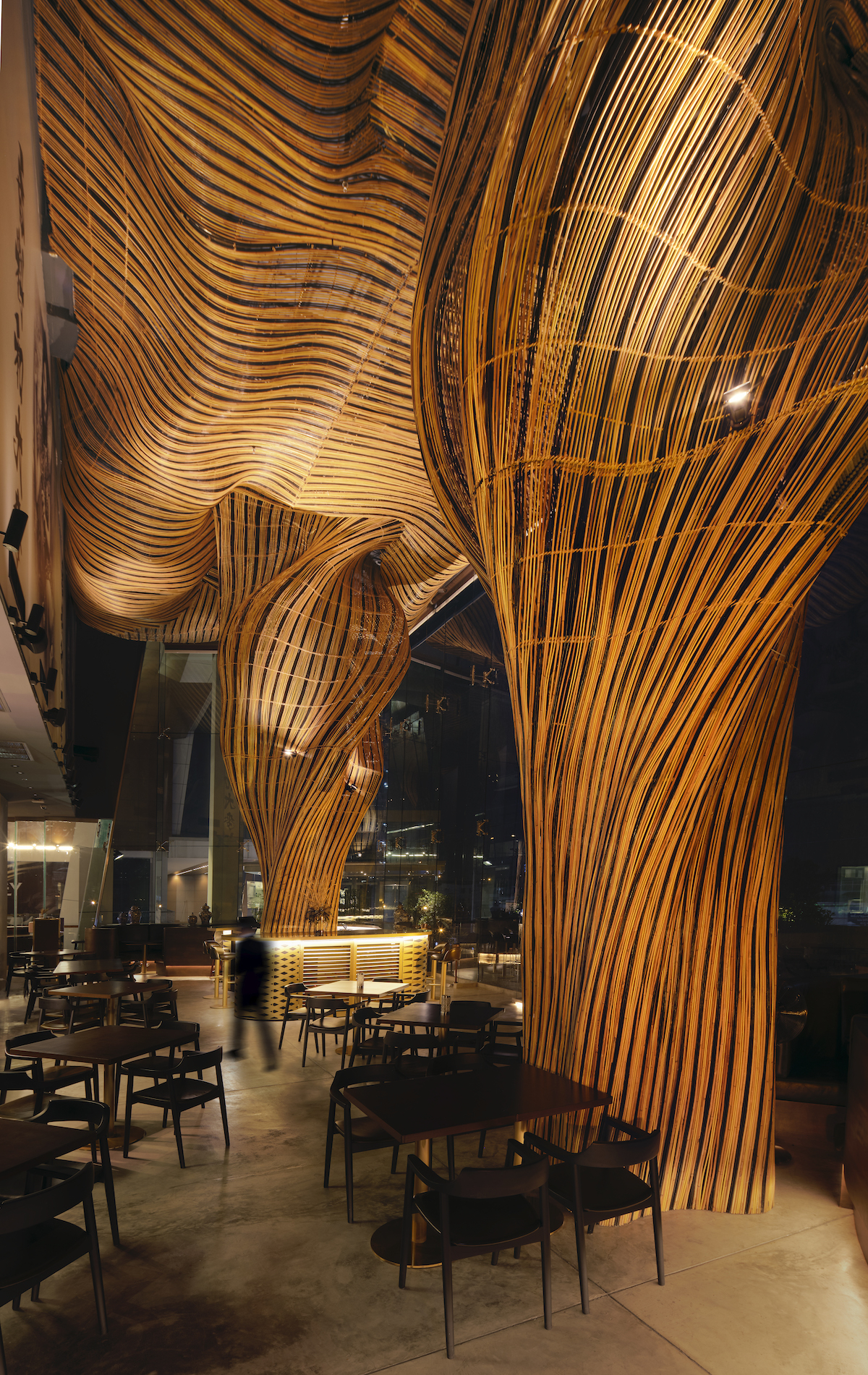 In the case of Spice & Barley, this innovation helped to highlight the Belgian craft beer on the menu. The unusual form is a subtle abstraction of beer as it is poured into a glass. The oversized structure also allows for critical services—such as air conditioning and beer dispensers—to be hidden within and keeps the rest of the interior free of unsightly equipment.

These pouring geometries seem to be pulled from the similarly woven ceiling that undulates across the entire space. In addition to the wave effects, beautiful black and white portraits are painted on the back walls of the restaurant in honor of a local story. According to the tale, sisters May, Zaza, and Fei left their home in Sichuan to follow their unique paths in life. After spending years in different parts of the world, they were finally reunited overlooking the beautiful river in Bangkok. Spice & Barley celebrates a similar coming together by the river.

Whether you are a fan of the incredible use of rattan or the environmental and cultural narrative of the project, Spice & Barley is the perfect place to appreciate great architecture while reuniting with family and friends. 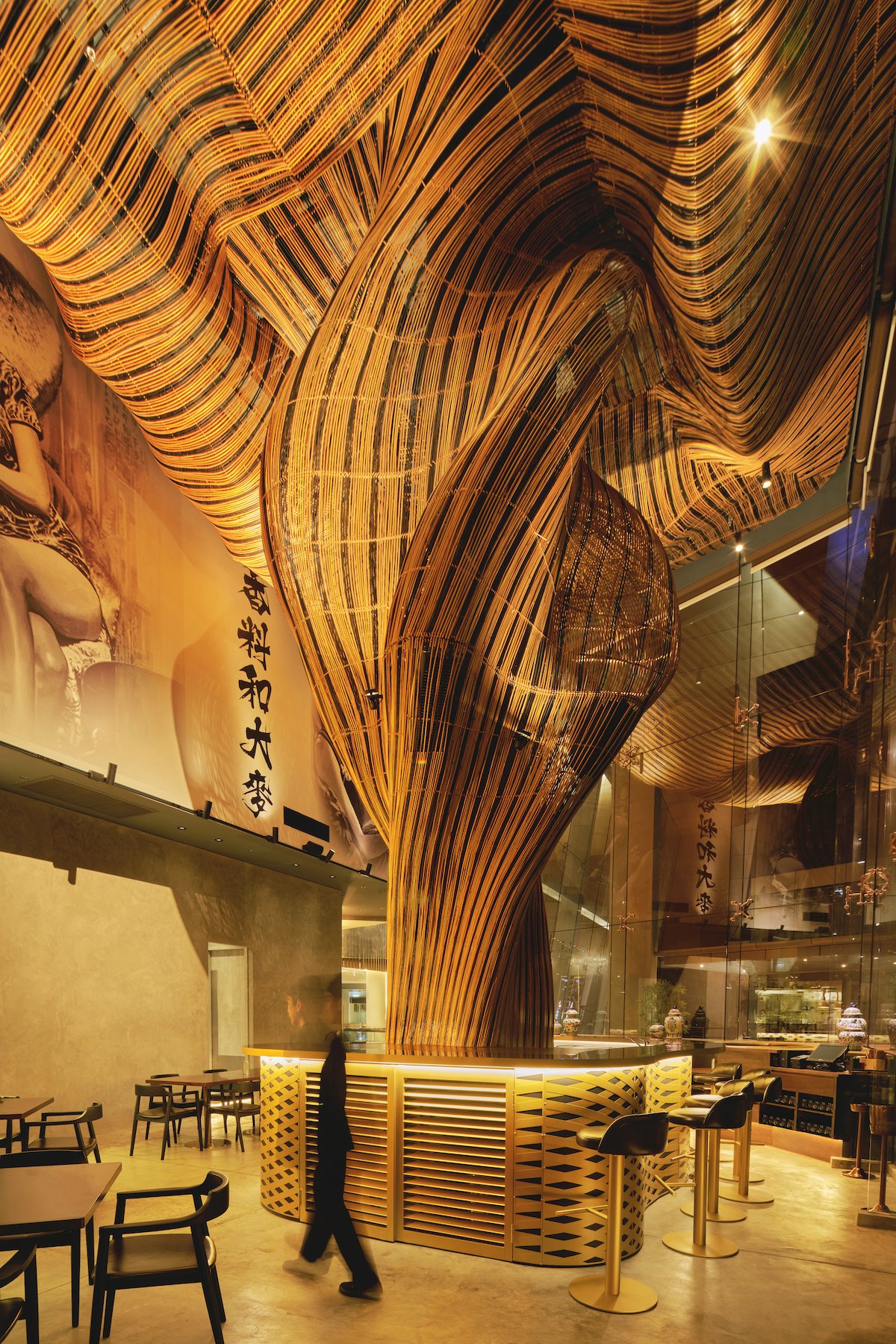 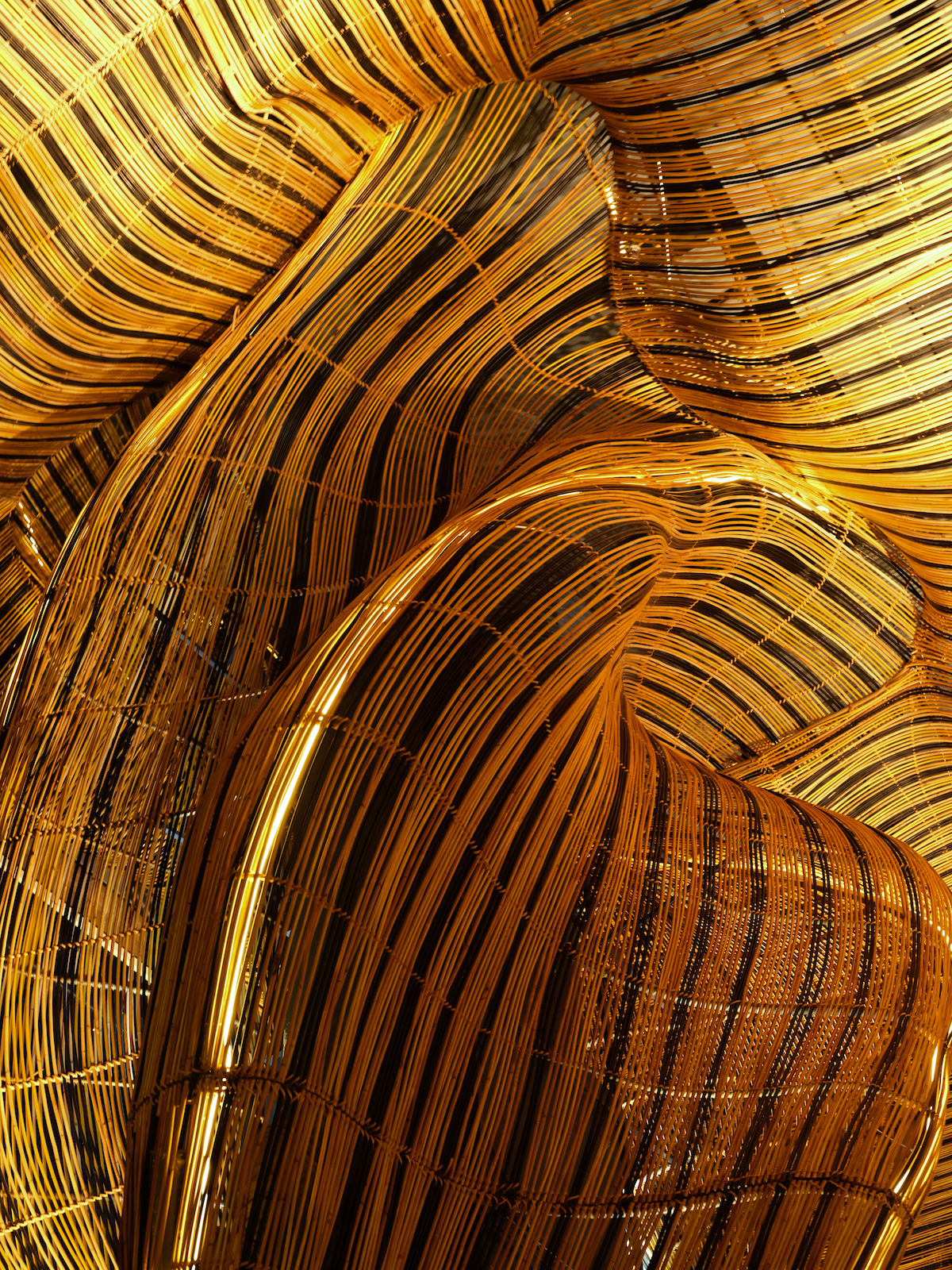 The unusual sweeping form is a subtle abstraction of beer being poured into a glass. 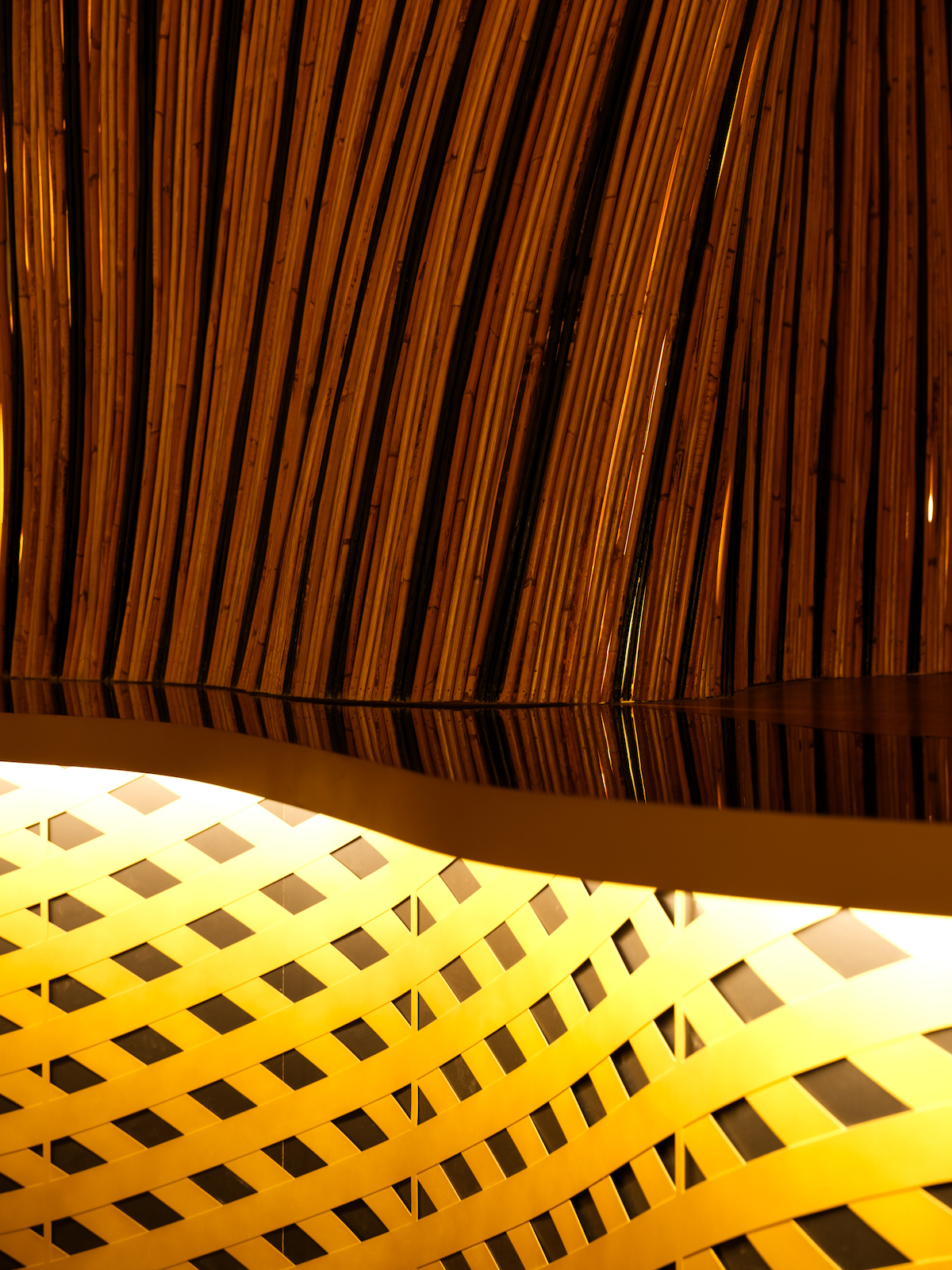 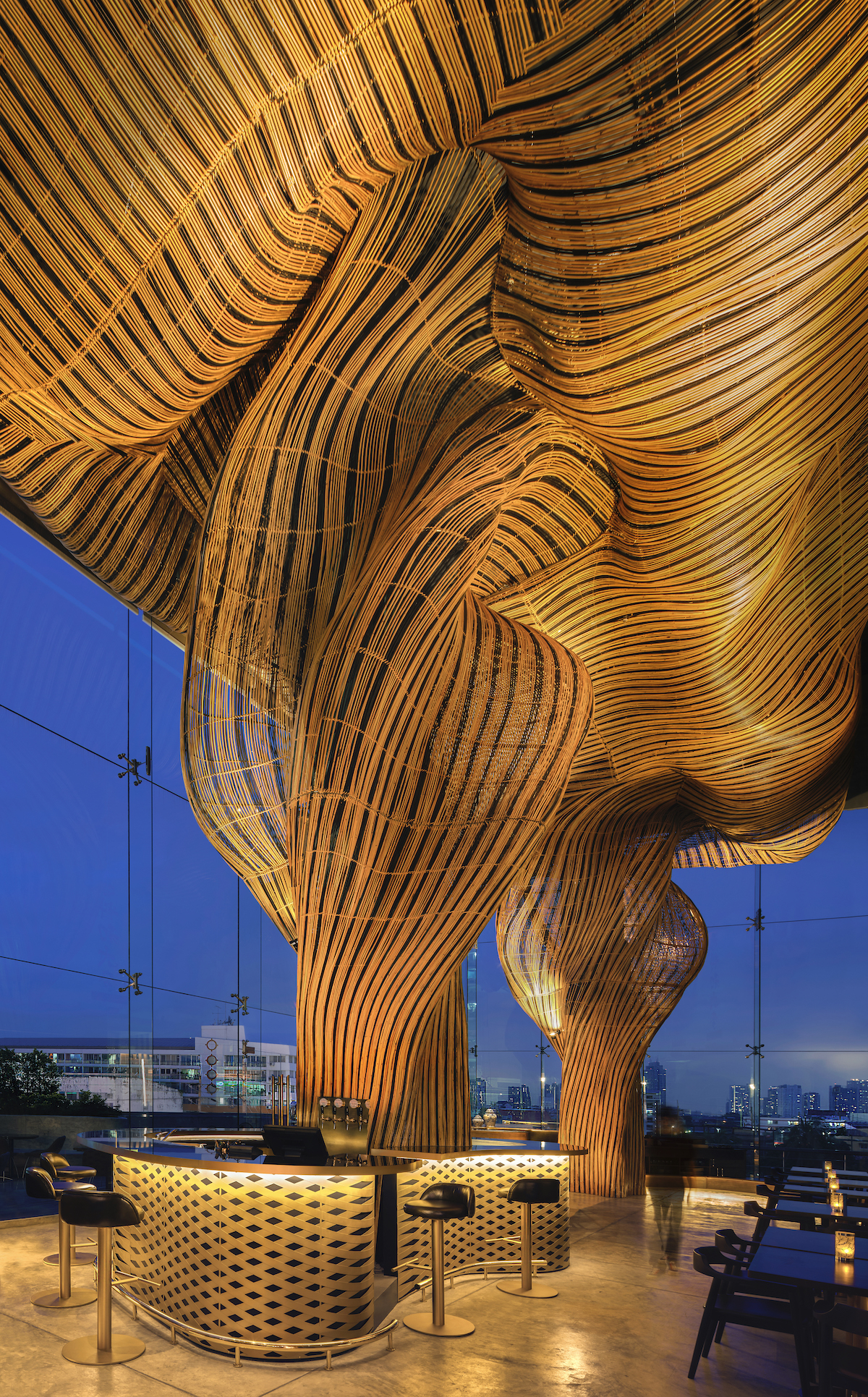 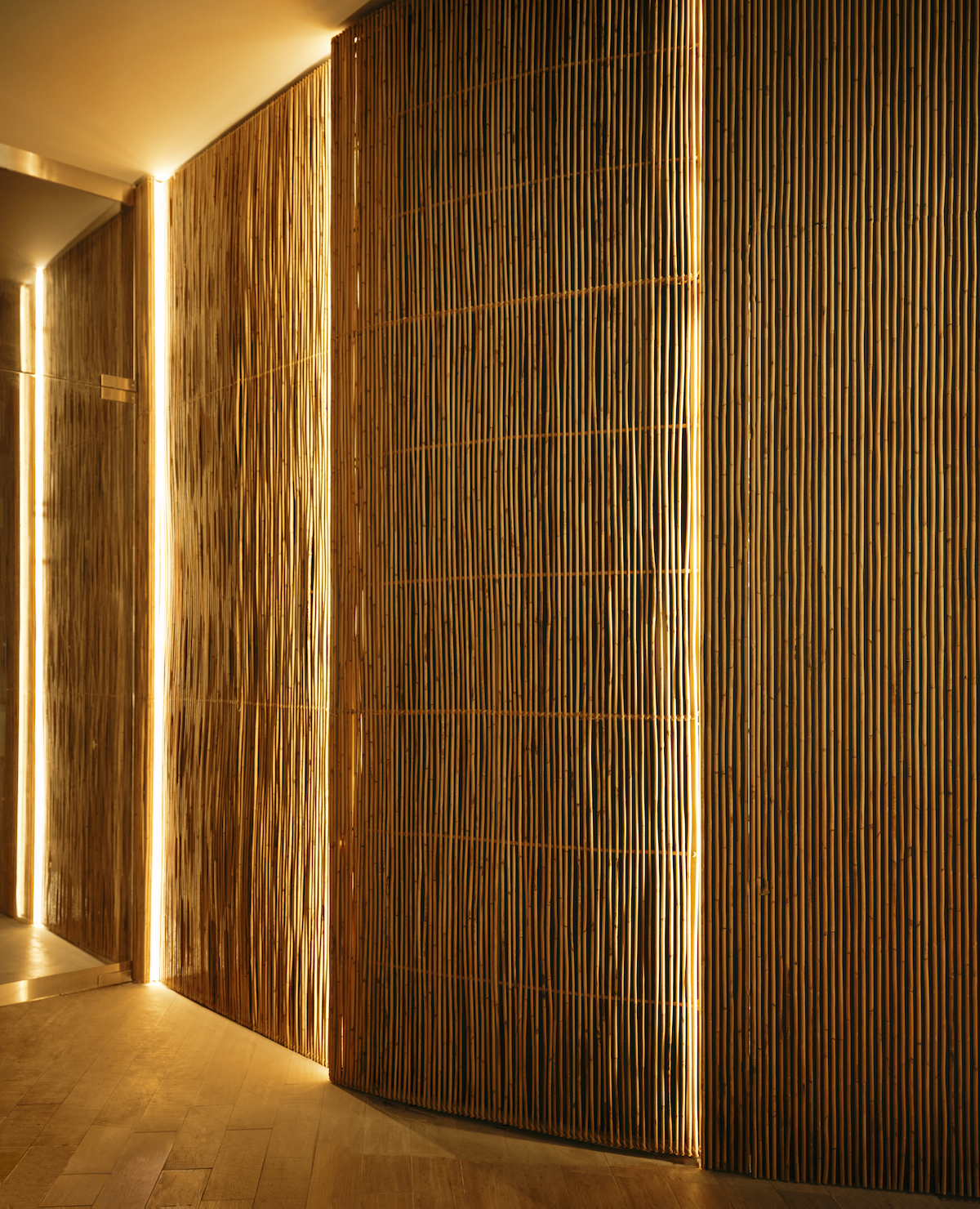 Spice & Barley tells the local tale of sisters May, Zaza, and Fei, who after years apart, joyfully reunited near a beautiful Bangkok river. The project invites guests to join in the celebration of coming together. 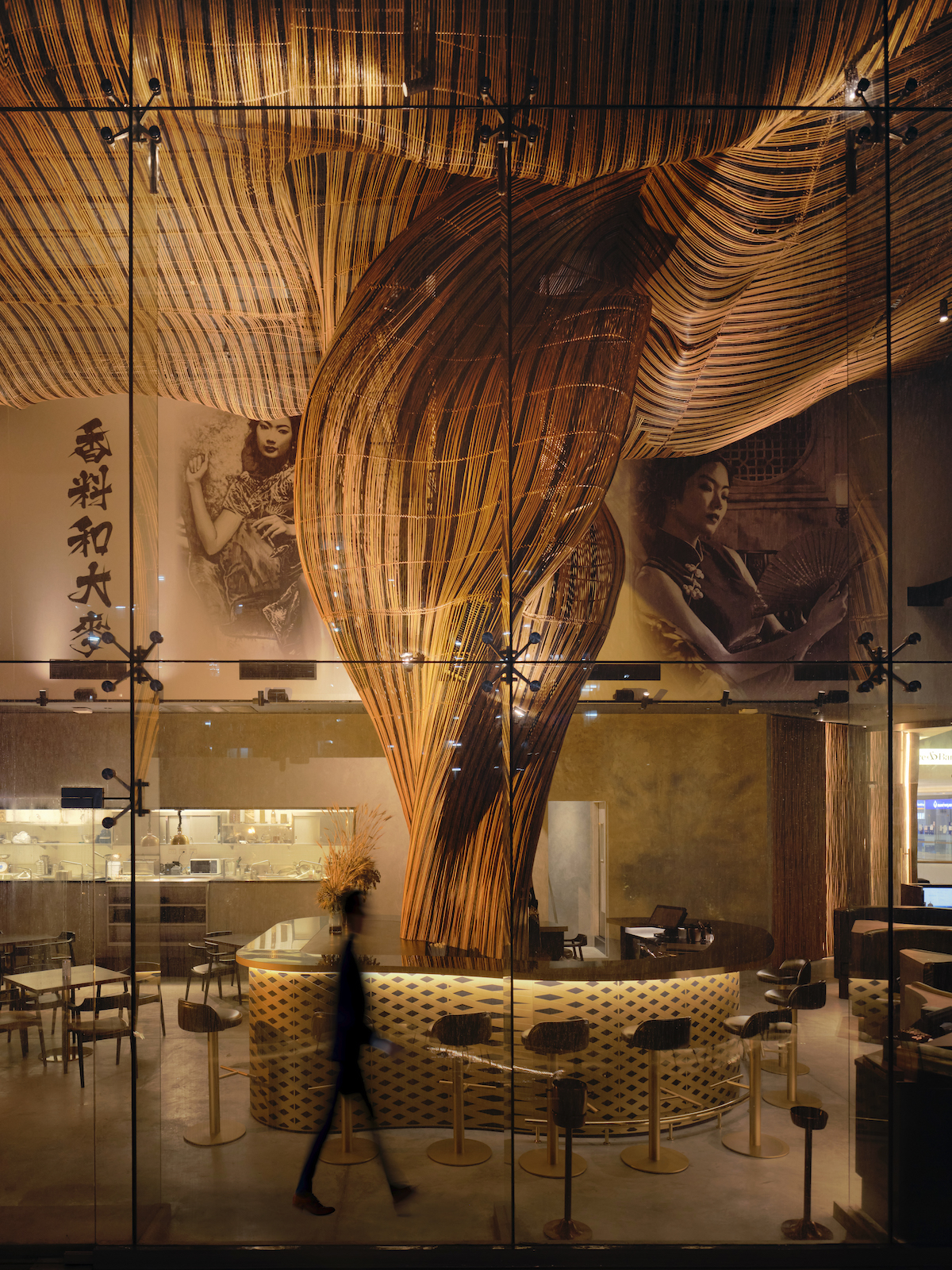 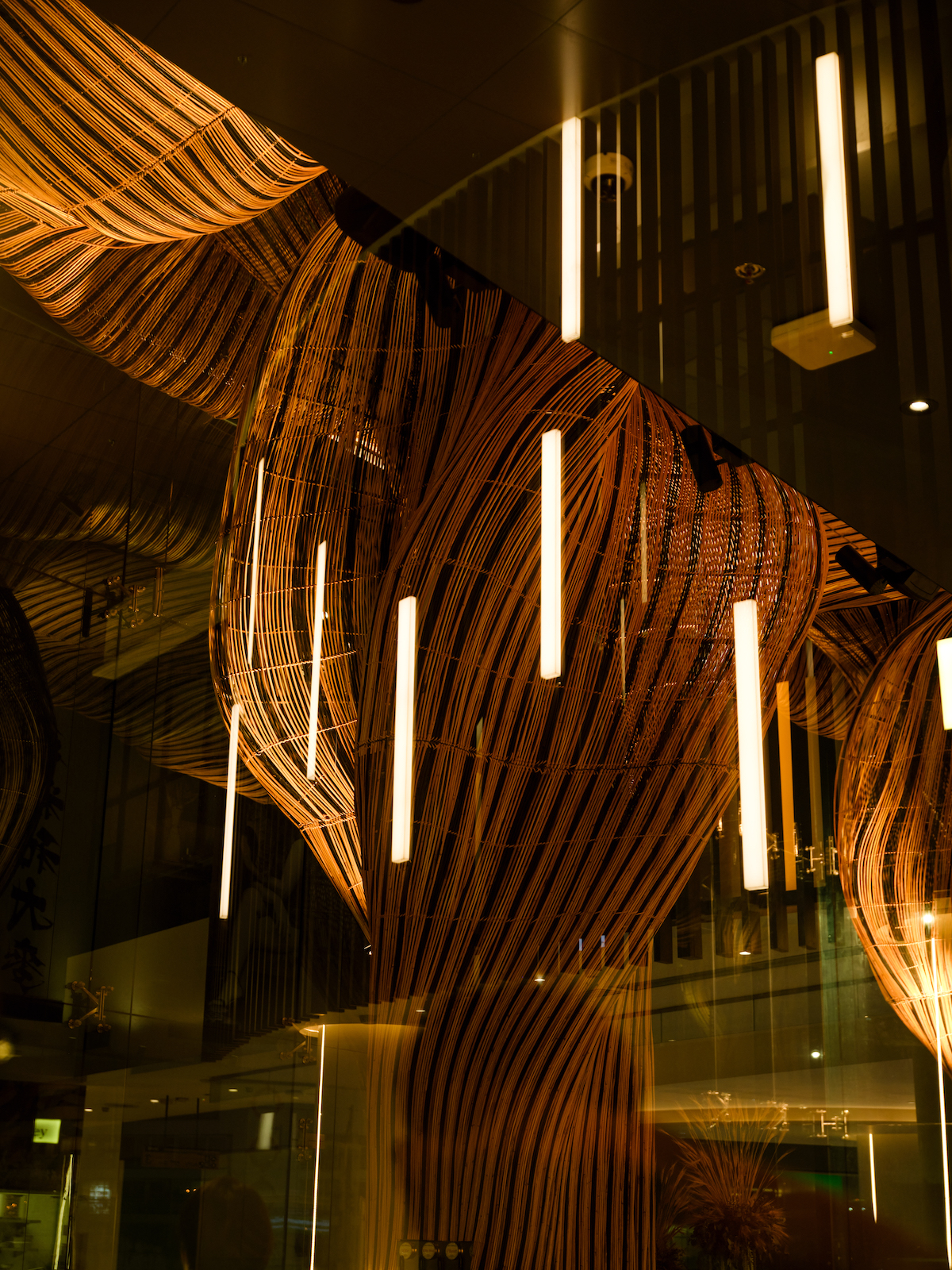 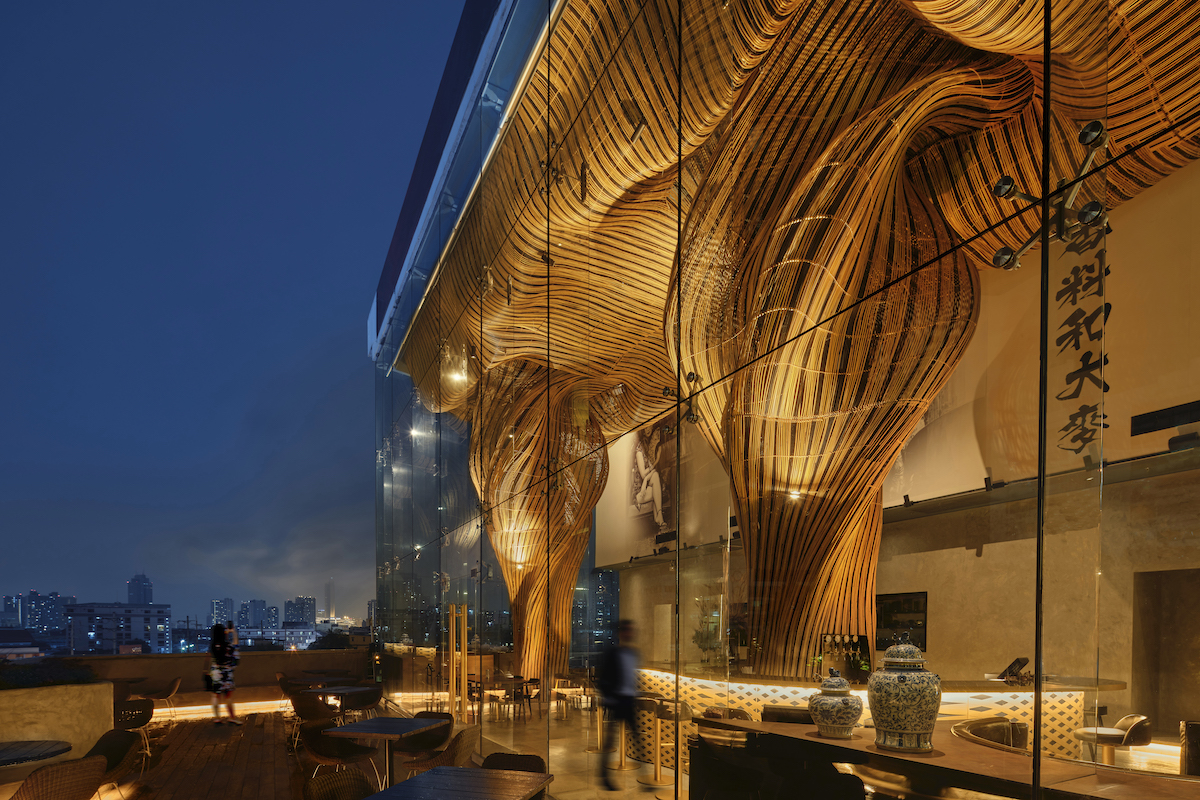 My Modern Met was granted permission to feature photos by Enter Projects.

Would you dine at Spice & Barley? Share
Like My Modern Met on Facebook
Get Our Weekly Newsletter
Become a
My Modern Met Member
As a member, you'll join us in our effort to support the arts.
Become a Member
Explore member benefits 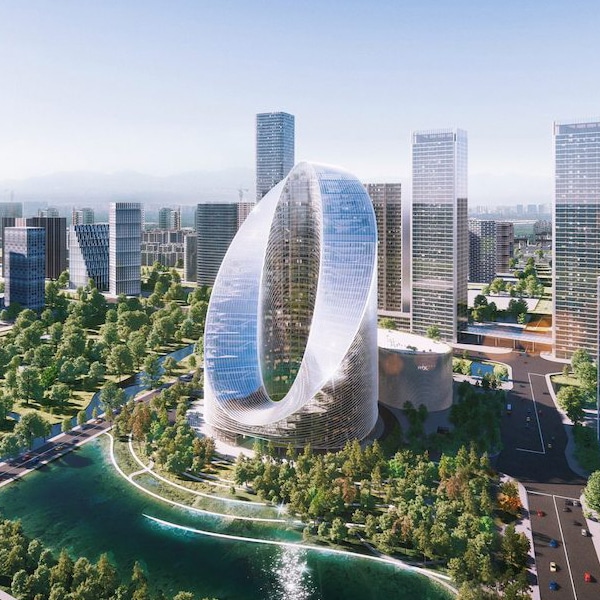 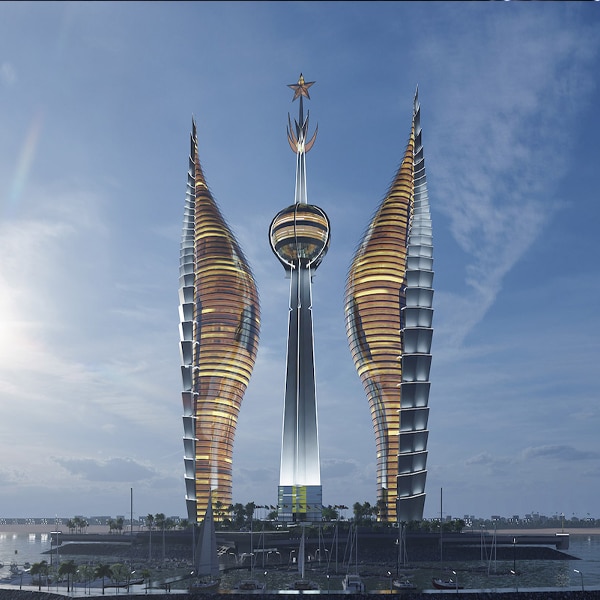 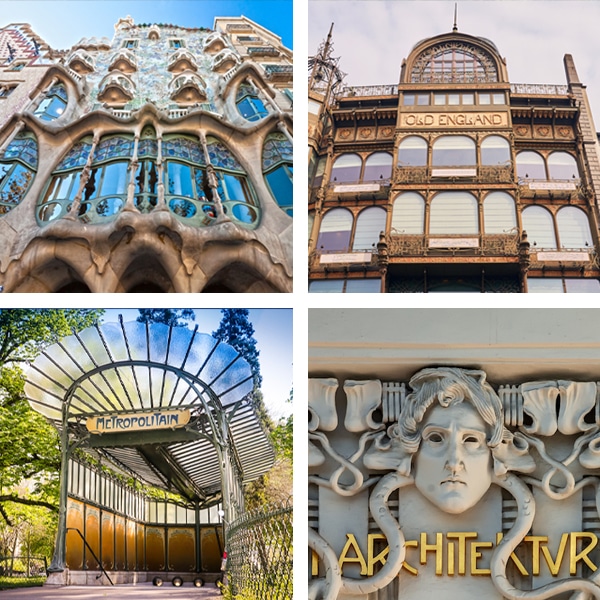 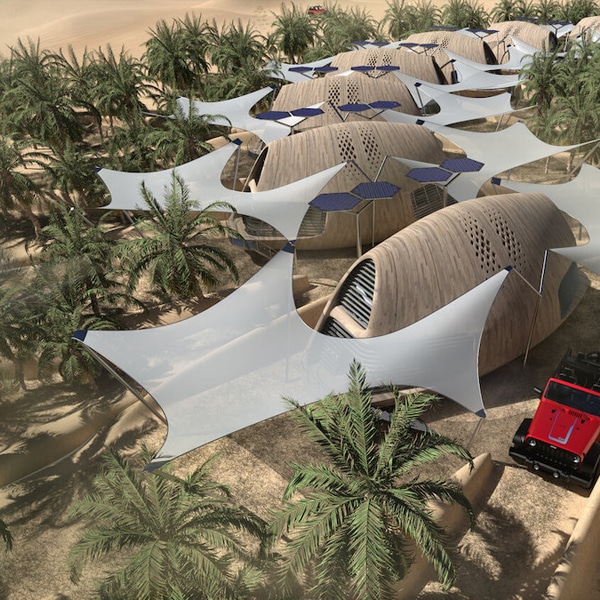