Snoop: Adorable Photo of a Child and a Cat 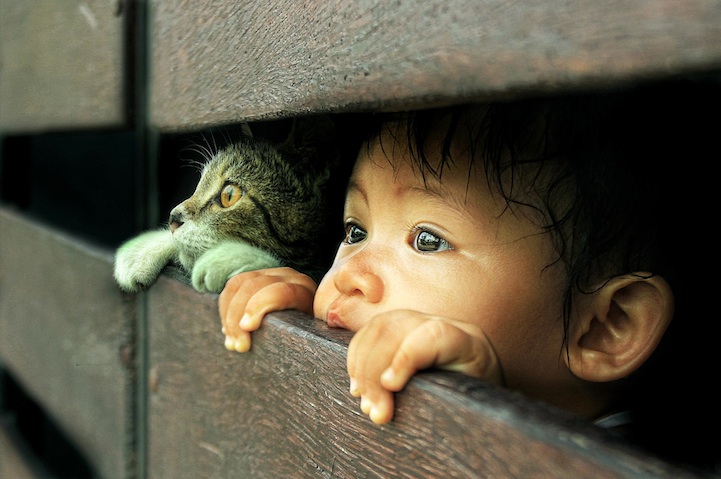 Four days ago, Indonesia-based photographer Tri Joko put up an extremely adorable photo called Snoop on photo sharing site 500px. Not only did 10,000 people view that photo in one day, it raised a storm of controversy as fellow photographers started to call “foul,” or in other words, “this is photoshopped.”

Two days after the photo went up, Joko answered back to the criticism with a blog post on his website that stated that he had placed the photo in the “Fine Art” category for a reason and that it was, indeed, a combination of two separate images. The 16-month-old child and the cat were placed together, looking as if they were spying on the same thing.

Here were a few negative and positive comments from 500px:

“Cool idea, but this is heavily photoshopped, right? The paw somehow looks misplaced to me.” – Lukas Grumet

“It's interesting and controversial to say that photos can't be retouched, even be photoshopped. Retrospectively, all the traditional paintings are all artificial work, aren't they? So how do we define an art work? I believe that the beauty of this picture should be more profound in the scene instead of how it is made.” – Lanny Yeh

Great idea for the shot …. but it's not honest.” – Simon Peckham

“It is creativity that is being exercised and appreciated on this site. People use PS etc quite commonly. Both the shots (the child and the cat) that have been used here are 3Joko's own work. So why are we talking about honesty. This is a cool job. Like it.” – Rahul Tripathi

What are your thoughts? Can you appreciate the shot for what it is, given the fact that it's been photo manipulated?

Update: We got in touch with Tri Joko to ask him some questions about the cute (and controversial) photo:

Did you take both photos?
Yes, I shot both. One shot for the cat photo and another to shoot my daughter who was 16-months-old. They were two photos taken at the same location.

Can you tell us more about the photo ?
This photo was shot at my home. It's my garage door. The model is my little daughter, who was 16-months-old at the time, and my neighbor's cat who often plays at our house.

How do you feel about all the attention it's received ?
I am happy that everyone has their own opinion. They either liked it or did not because of the Photoshop editing. For me, art must keep up with technology and try not to be too traditional. Unless we are making a photo documentary, then photos must be original.

Almost all of the photos on the front page of 500px have some sort of editing. On the question of whether I was not honest with everyone in regards to the photo editing, I put it into the category of “Fine Art” on 500px. Maybe people did not notice or did not like the editing done with Photoshop.

In this photo, I just wanted to convey the idea of two beings peering into the future with clear eyes.