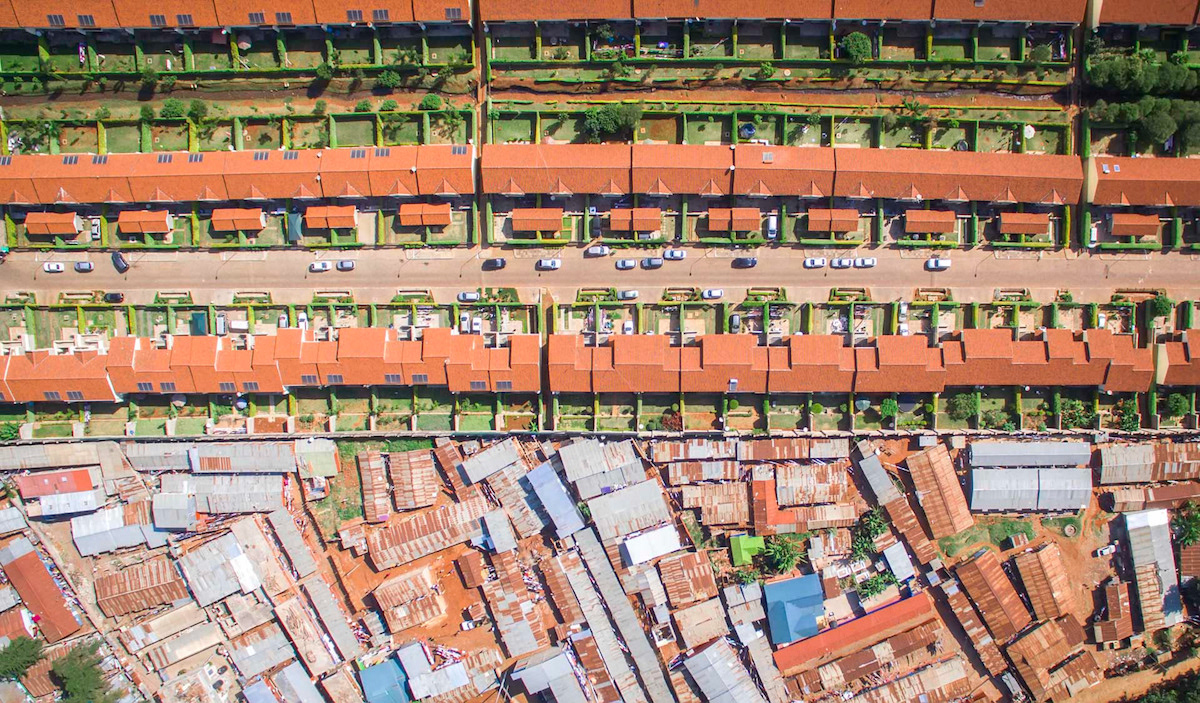 Nairobi, Kenya
This post may contain affiliate links. If you make a purchase, My Modern Met may earn an affiliate commission. Please read our disclosure for more info.

When we first brought you Johnny Miller's Unequal Scenes, the photographer was using aerial photography to highlight wealth disparity in South Africa. Now, he's branched out to countries around the globe, using a drone to call attention to the income differential that often sees new tennis courts adjacent to abandoned lots.

Since 2016, Miller has captured around 100 photographs in South Africa, India, Tanzania, the United States, and Kenya. The project was born from Miller's time in South Africa, where he moved to study for a master's degree in anthropology. Startled by the tin shacks he saw around him, which give way to affluent neighborhoods, he began using his camera to force people not to turn away from issues of wealth inequality.

“The images that I find the most powerful are when the camera is looking straight down—what’s known as ‘nadir view,' looking at the actual borders between rich and poor,” Miller tells My Modern Met. “Sometimes this is a fence, sometimes a road, or wetlands—with small shacks or poor houses on one side, and larger houses or mansions on the other. Whatever it is about the composition of those photographs, they are extremely powerful to people. I think the images make inequality relevant—people can see themselves reflected in the images, and it’s deeply unsettling.” 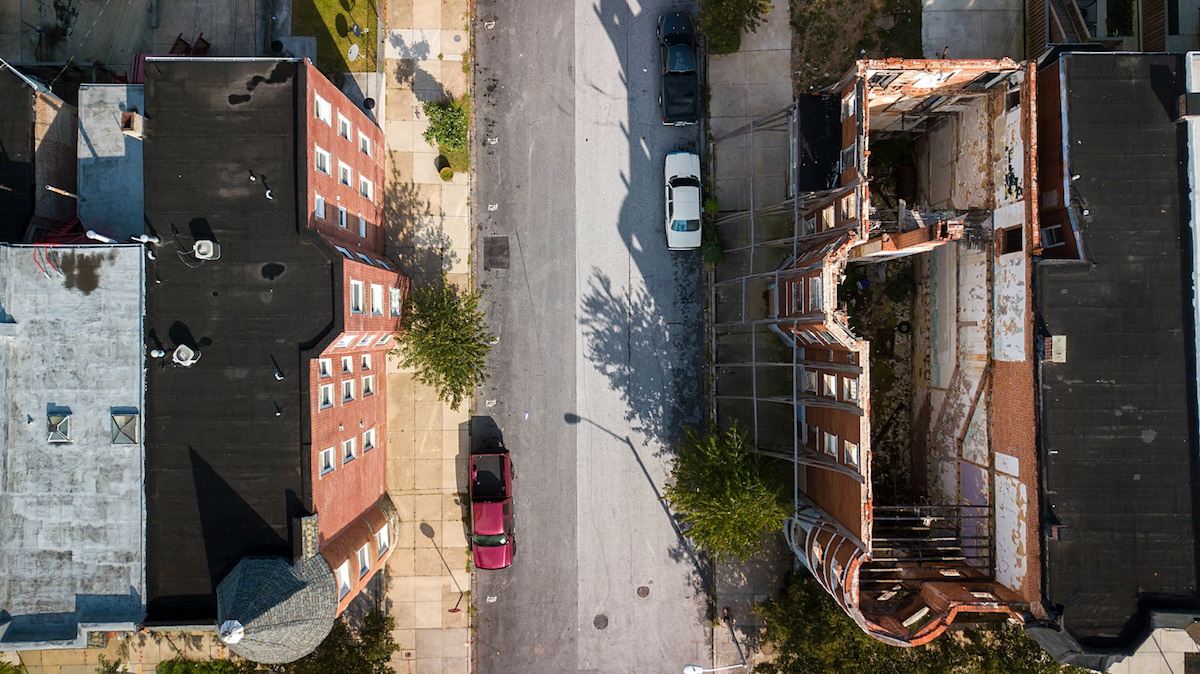 Miller, who works with DJI and Hasselblad, is dedicated to aerial photography for its ability to provide emotional distance in his photos. This allows viewers to pull back and truly take in the details, and meaning, of the scene before them. Most recently, Miller shot with a DJI M600Pro mounted with a Hasselblad A6D 100megapixel camera. These images will be exhibited in selected cities later in the year.

Shooting Unequal Scenes is quite labor intensive, with Miller putting in a lot of research to find locations. At times this means scouring Census records and slum maps, at other times it requires relying on local advice. Once Miller identifies the areas he wants to photograph, he charts a flight path on Google Maps. Still, as he's usually on his own, there is a lot of think about.

“Shooting in dangerous cities and informal settlements often means you are highly aware of your surrounding environment, your personal safety, and the actions you are having on the community around you,” he shares. “When you have official support, it can be a fun, even rousing atmosphere—like in Kibera, Kenya, where we were surrounded by dozens of people cheering at the drone rising into the sky. When you are on your own, it can be much more challenging and even scary.”

Through his photography, Miller has not only carved a creative path but found a larger purpose. His NPO, africanDRONE, helps empower African storytellers in the pursuit of drone journalism. And as he continues Unequal Scenes, Miller continues to bring important social and economic issues to light.

In 2016, Johnny Miller started taking drone photos in South Africa to highlight the wealth inequality he saw around him. 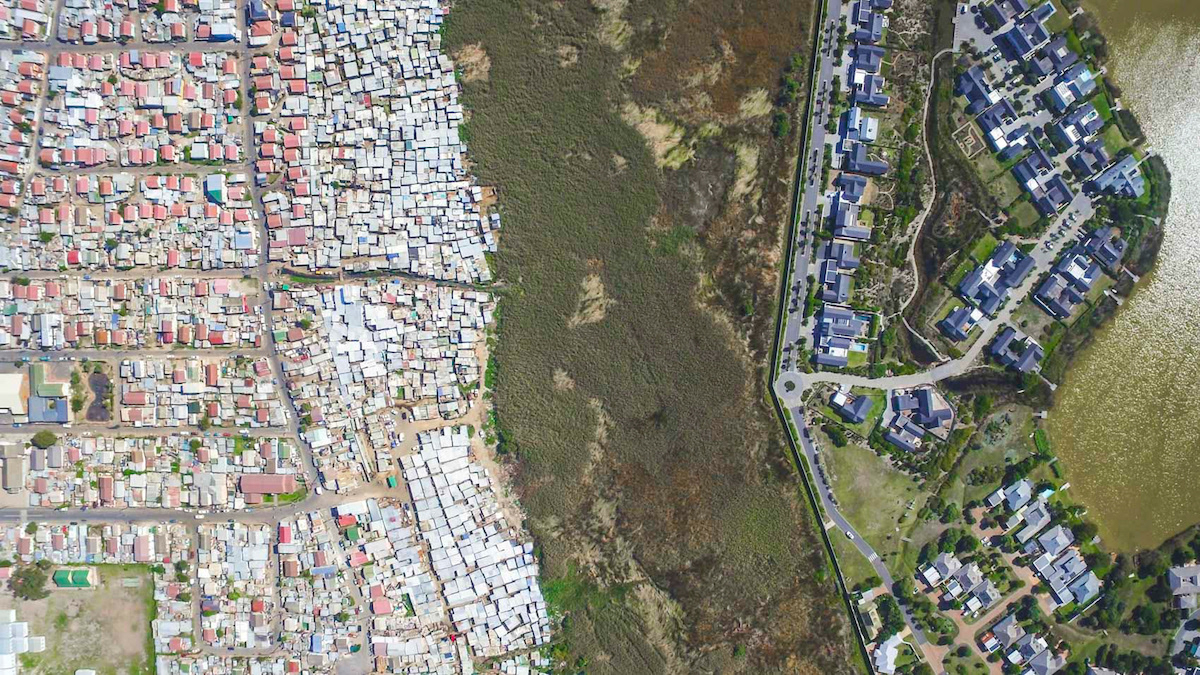 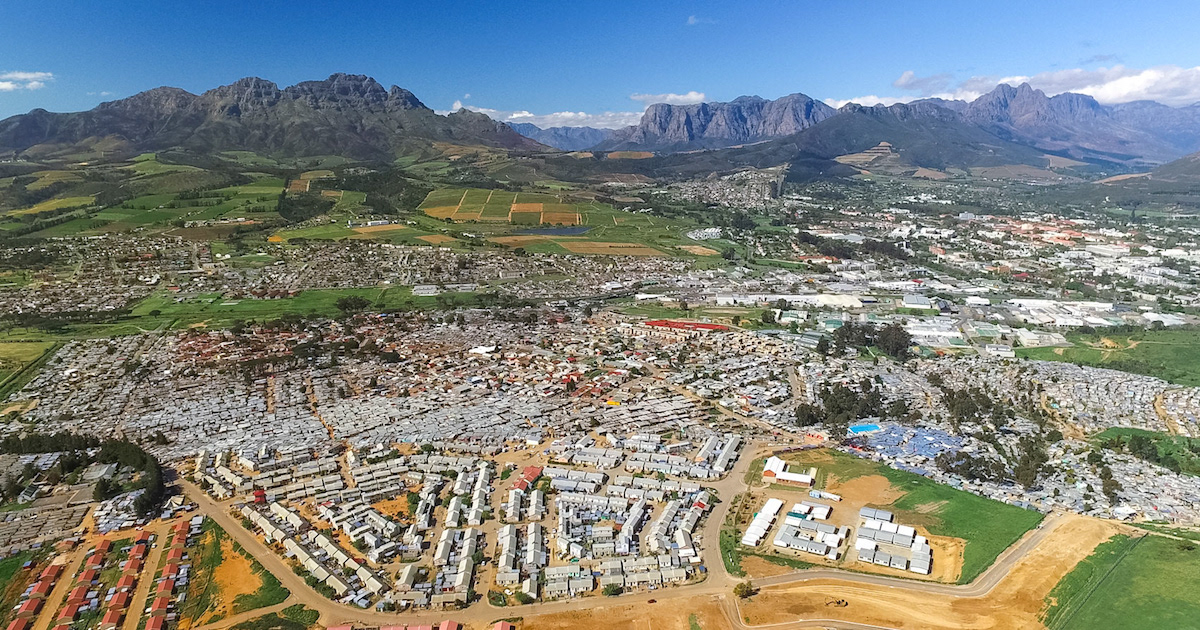 Now, he's bringing Unequal Scenes around the world to open the public's eyes about an issue that may be uncomfortable for some. 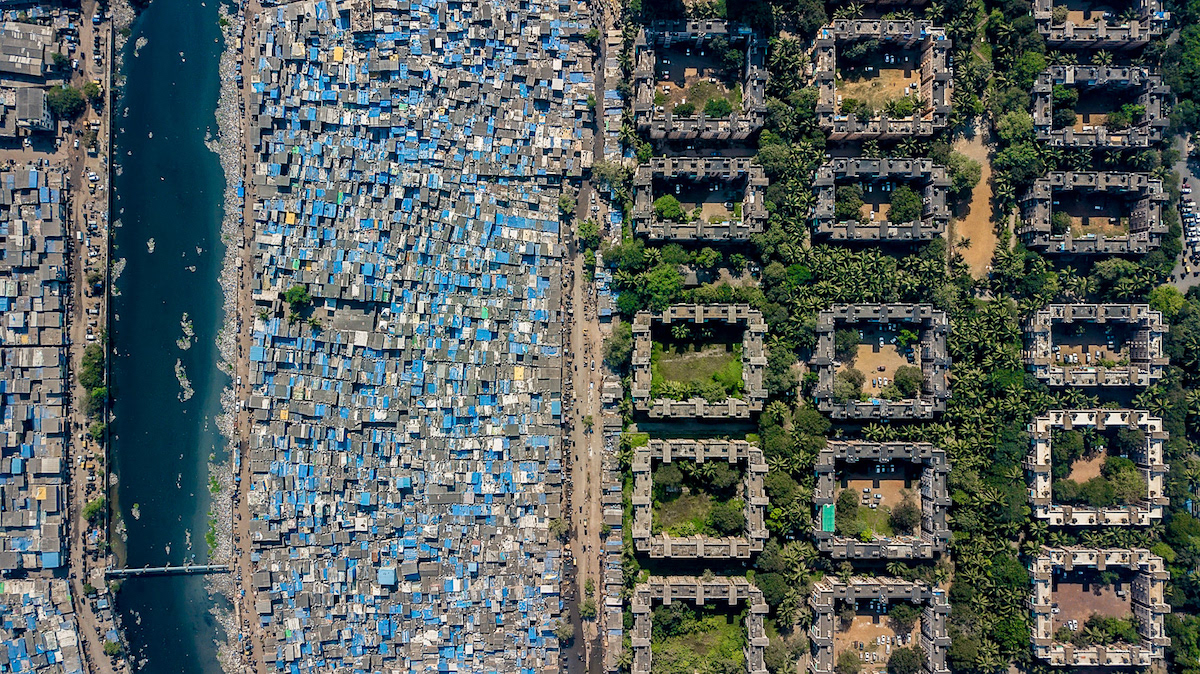 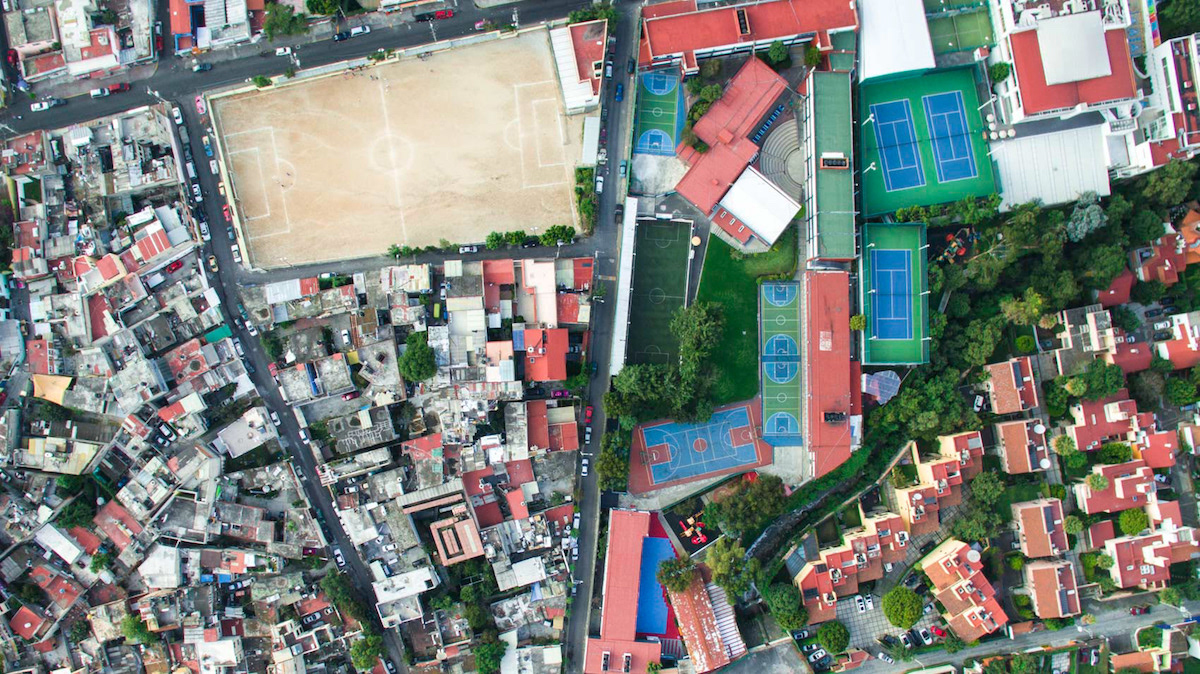 “I think the images make inequality relevant–people can see themselves reflected in the images, and it’s deeply unsettling.” 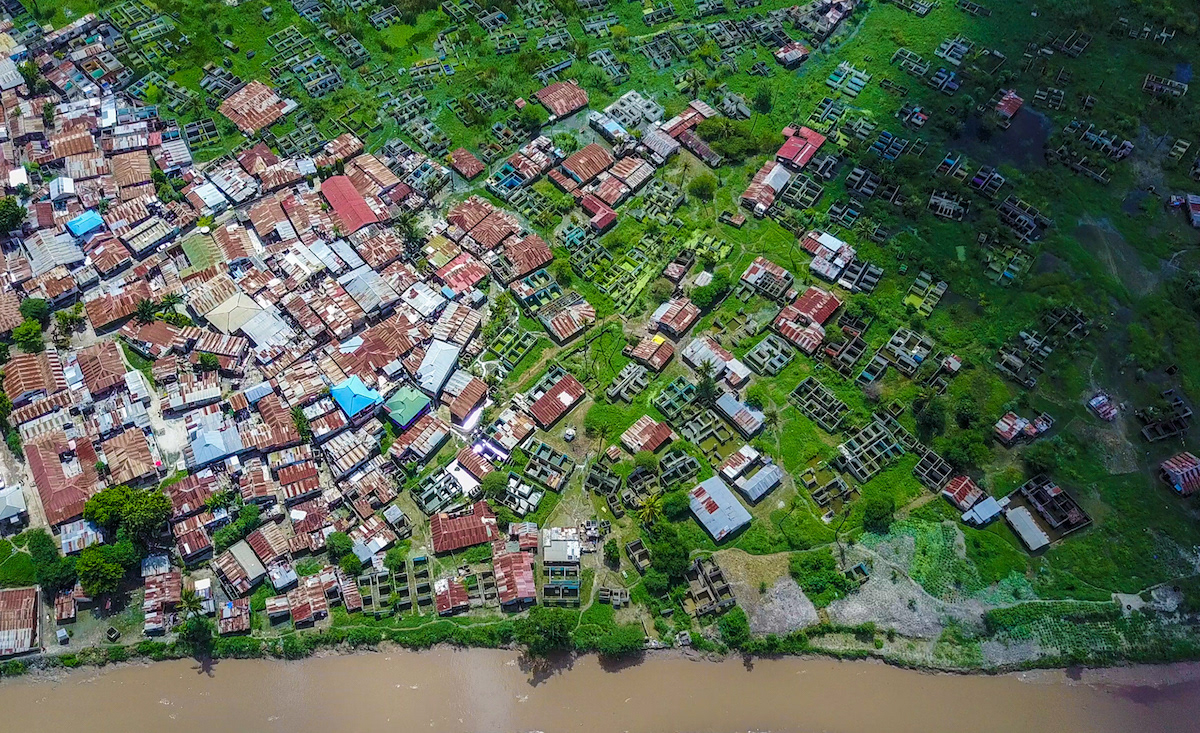 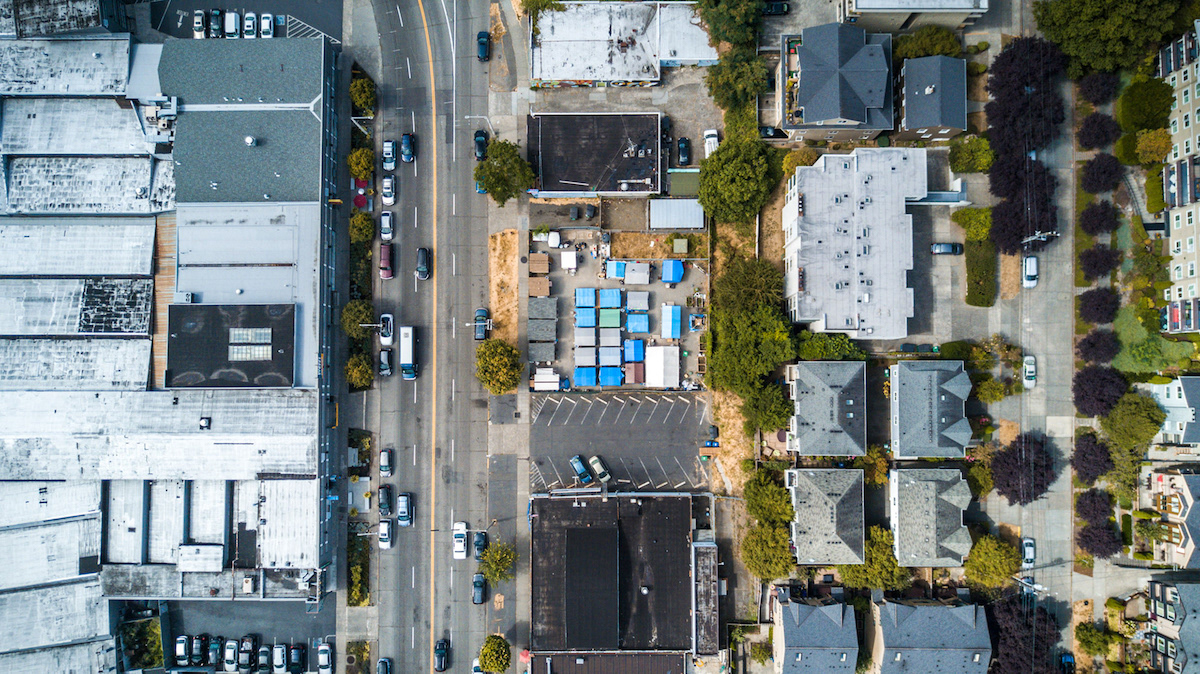 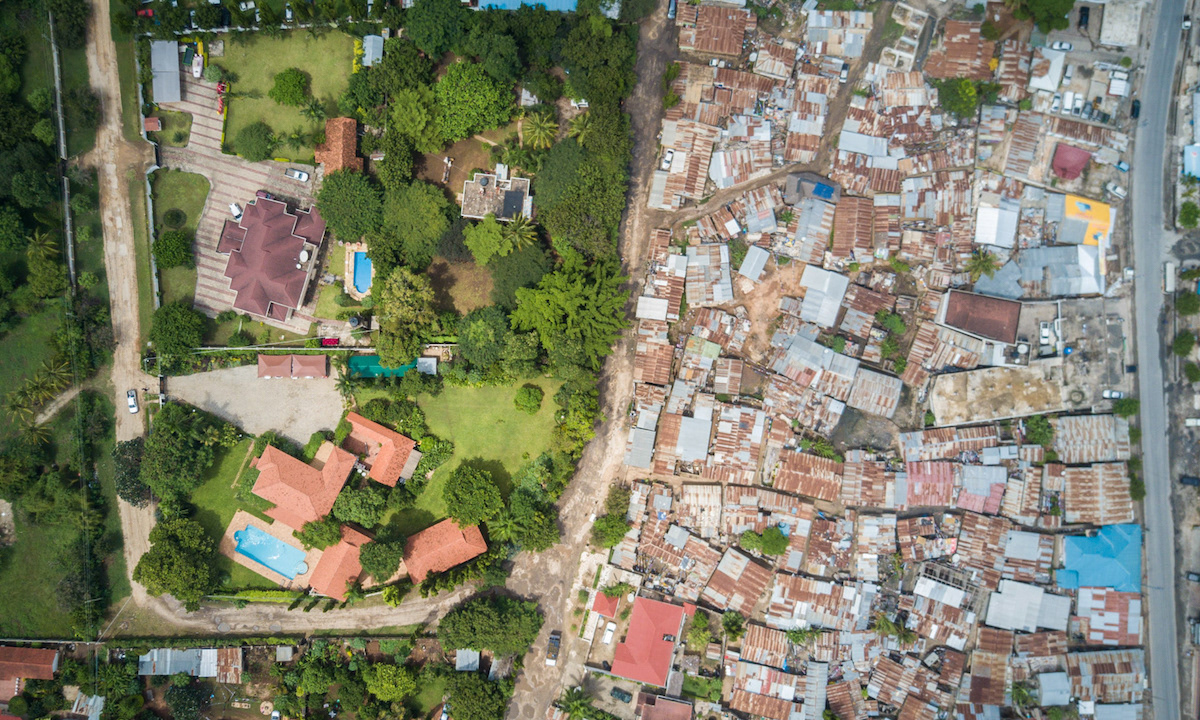 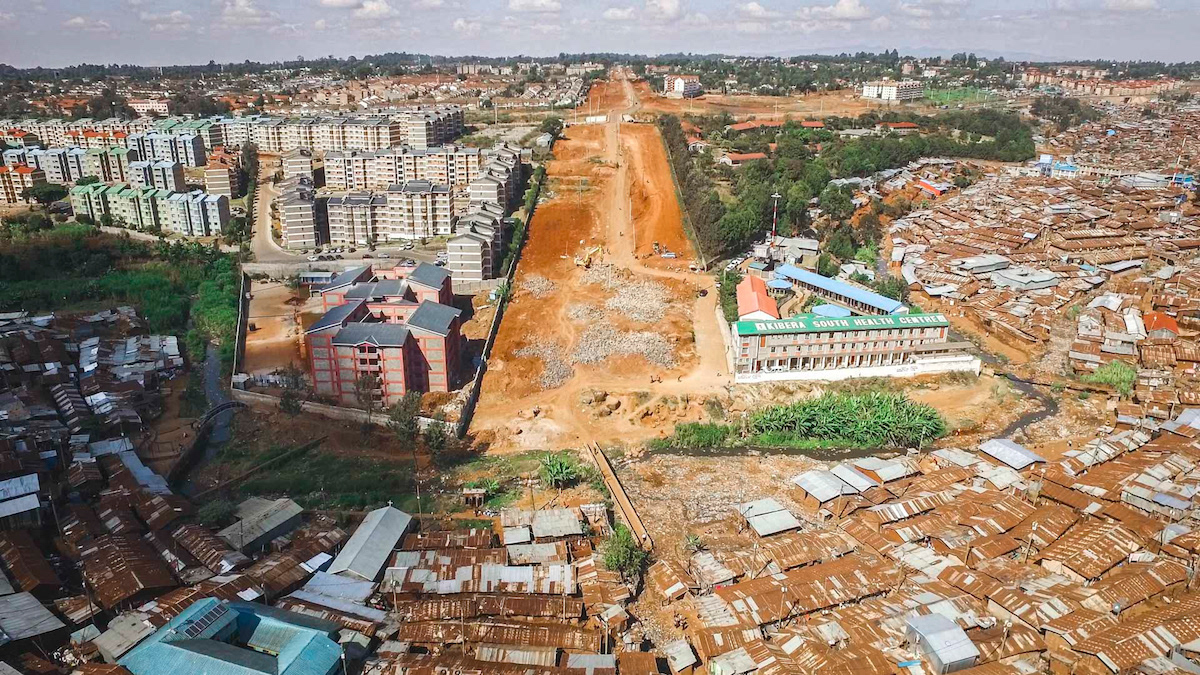 “Through these conversations we can begin to understand the scope of the problem, and through that understanding, we can develop solutions.” 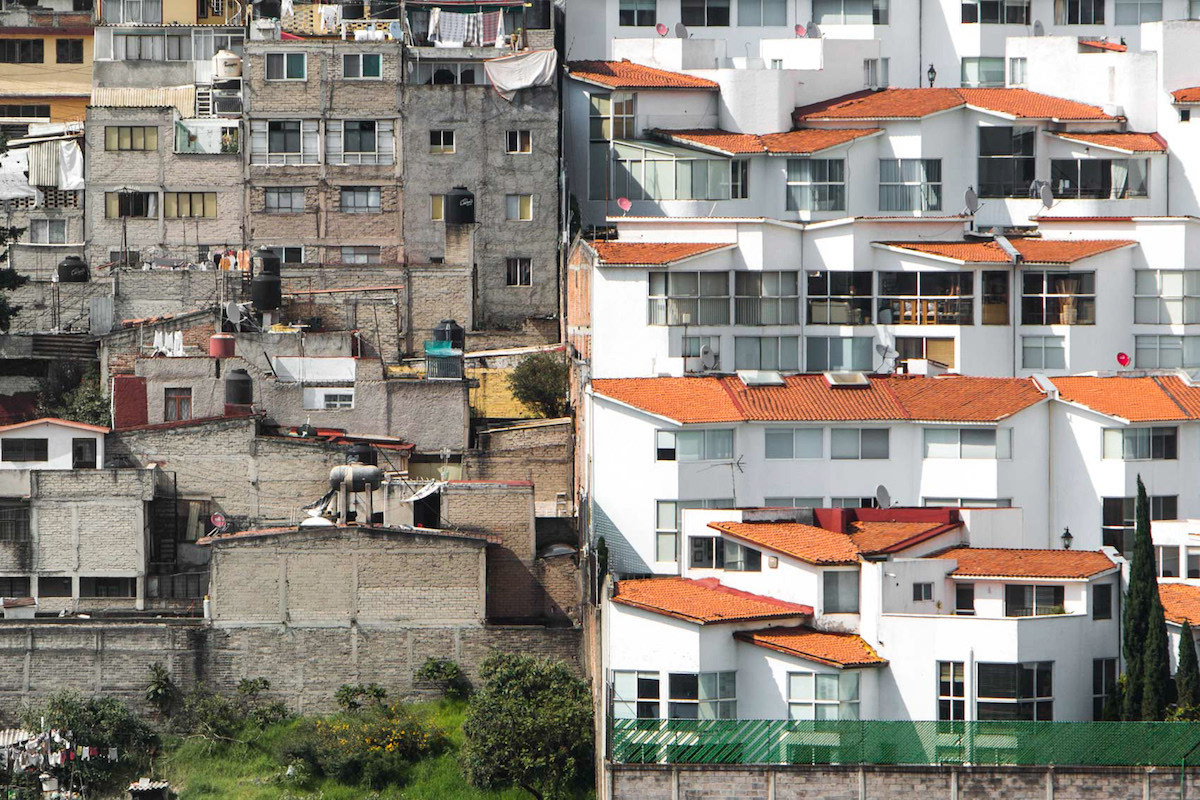 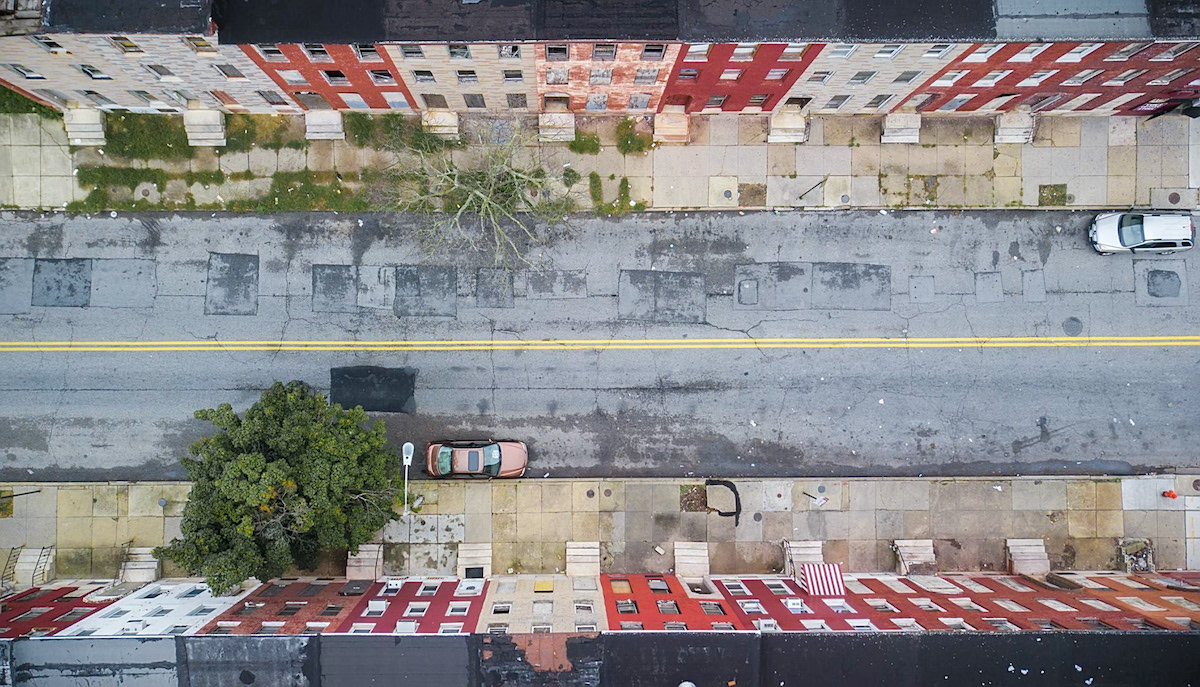 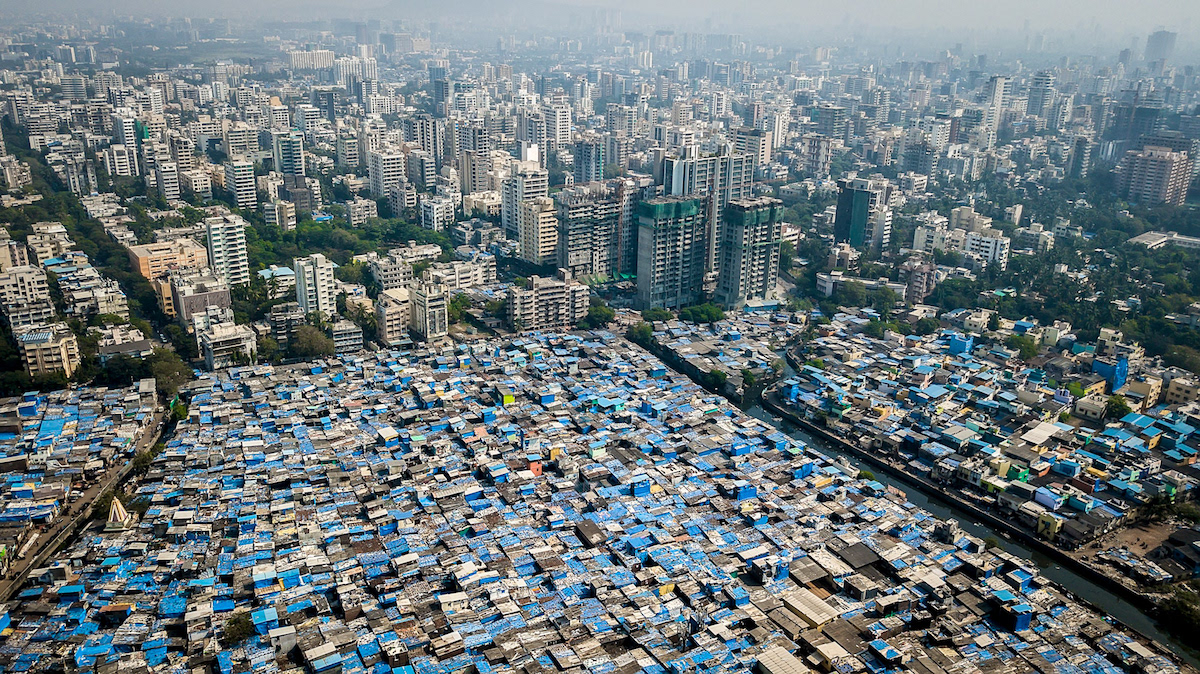 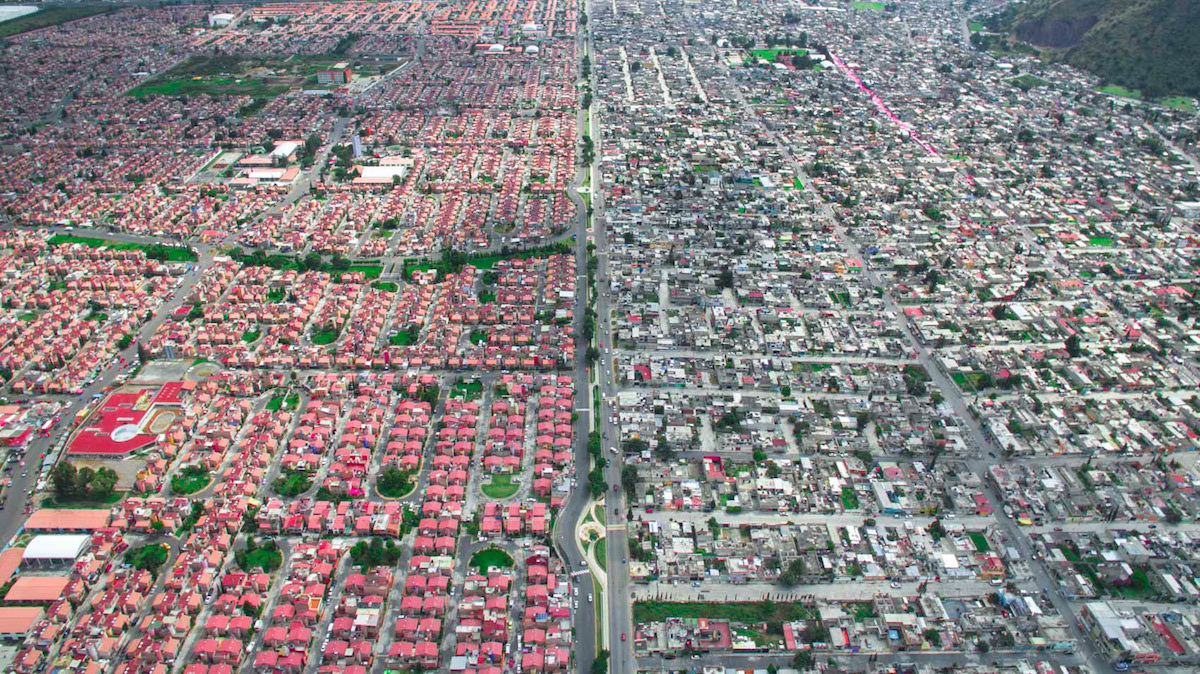 My Modern Met granted permission to use photos by Johnny Miller.

Drone Photography Where the Shadows Tell the Stories

Shocked by these drone photos? Share
Like My Modern Met on Facebook
Get Our Weekly Newsletter
Become a
My Modern Met Member
As a member, you'll join us in our effort to support the arts.
Become a Member
Explore member benefits