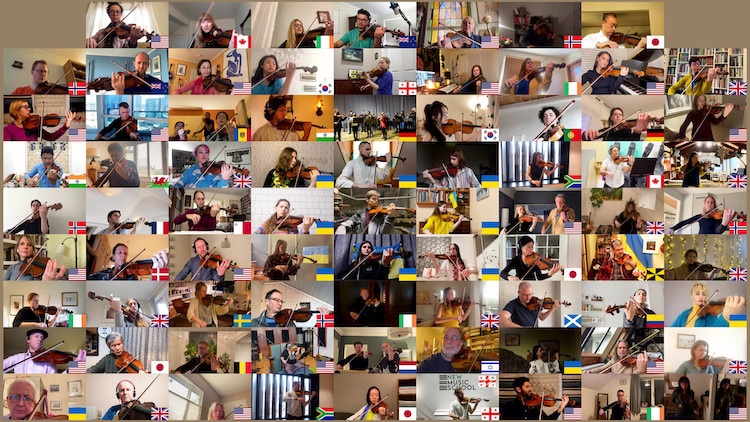 It is often said that music is the universal language, and now musicians from all around the world are proving that expression to be true. In a moving video, almost 100 violinists join together in one voice to express their support for Ukraine during this time of war—all without speaking a single word. The virtual concert features professional and famous violinists from 29 different countries as they join in unison to accompany several dedicated musicians in Ukraine who play their instruments from basement bomb shelters. The international ensemble unites to perform a short but expressive rendition of the Ukrainian folk song “Verbovaya Doschechka.”

The transnational virtual concert had its beginning with Ukrainian violinist Illia Bondarenko when he first filmed himself playing from a basement shelter in Kyiv, Ukraine. The impromptu performance was at the request of his friend Kerenza Peacock, a professional violinist from the UK who is currently based in Los Angeles. And from an orchestra of one, it quickly expanded to include 94 violinists from countries across the globe.

“I befriended some young violinists in Ukraine via Instagram and discovered some were in basement shelters but had their violins,” explains Peacock. “So I asked colleagues across the world to accompany them in harmony, and I got sent videos from 94 violinists…in 48 hours!” Peacock reviewed each submission to the newly formed international violin choir and put together a stirring video of all the musicians playing in harmony from their various locations across the world. According to Peacock, Bondarenko had to film his performance between explosions in order to hear himself play.

In addition to Bondarenko, 10 other young violinists who are sheltering in Ukraine join the concert in unison. “Ukrainian violinist, Mariia Klymenko, 23, told me that as she was recording this, her brothers were defending their country,” Peacock shares. “She said more Ukrainians wanted to join us but they now have guns in their hands instead of violins. The violin has traditionally been an instrument through which to express grief…It seems like everyone is praying with their violins.”

The prayers of each player are united in their global concert from thousands of miles apart. In the video, the 11 Ukrainian violinists are accompanied by professional musicians from the London Symphony Orchestra, Tokyo Symphony, Oslo Philharmonic, Hollywood Studios, and even the whole violin section of the Munich Chamber Orchestra. Other violinists join the virtual concert from countries in every hemisphere, including Ireland, the Netherlands, Belgium, Poland, Georgia, Denmark, Moldova, New Zealand, South Korea, South Africa, and India. The video even features famous violinists hailing from various disciplines, including Brittany Haas, Sara Watkins, Mark and Maggie O’Connor, Gabe Witcher, and international soloist Daniel hope—who, coincidentally, once coached Bondarenko.

But the music doesn’t stop there. Peacock is encouraging anyone who wishes to make a recording and join the growing ensemble to download the full music score and play along with the original video. Once you’ve finished your performance, you can post it to social media using the hashtag #ViolinistsSupportUkraine. However, if you’re not so musically inclined, Peacock has also created a list of organizations you can contribute to in support of Ukraine.

For a full list of the violinists featured in the video and to learn more about the initiative, visit the Violinists Support Ukraine website.

Violinists from 29 countries join sheltering Ukrainian musicians in a virtual concert to support Ukraine during this time of war. 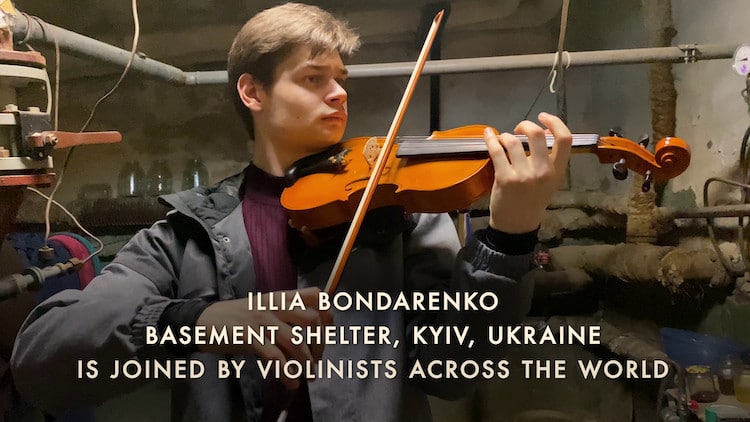 Watch them perform a moving rendition of the Ukrainian folk song “Verbovaya Doschechka.”

All images via Violinists Support Ukraine.