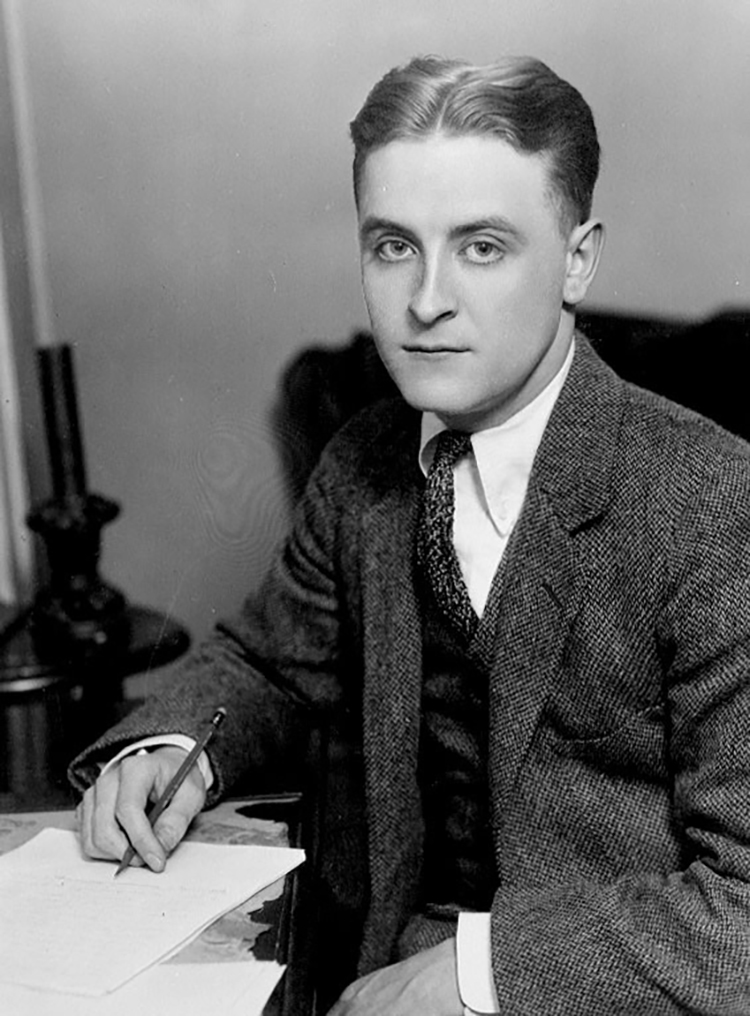 Writer F. Scott Fitzgerald and his wife Zelda were the darlings of the Jazz Age—late nights, lots of liquor, and brilliant wit to match. The young author saw early success but struggled in later life in a remarkable parallel to the course of American history, which fell from the sparkling roaring twenties into the Great Depression and World War II.

Fitzgerald dreamed of being a romantic figure from a young age. After his death, his legacy developed into one of melancholic genius. In becoming one of the most famous writers of the 20th century, the details of his short yet fascinating life are often overlooked.

Read on to discover the story behind one of America's literary heroes. 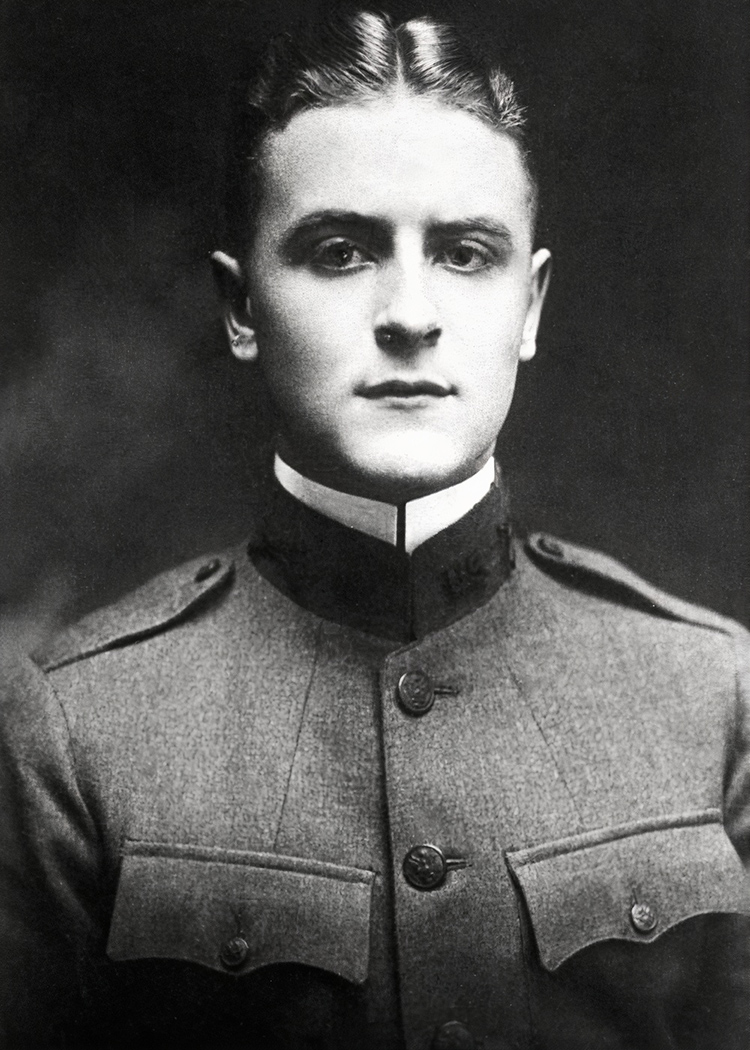 The writer photographed in uniform in 1917; he was enlisted but never sent abroad. (Photo: Wikimedia Commons [Public domain])

F. Scott Fitzgerald was born in 1896 in Saint Paul, Minnesota. He spent his formative years in the cities of Buffalo and Syracuse in upstate New York as his father worked for Procter & Gamble. During Fitzgerald's teen years, the family relocated once more to Saint Paul. Scott—as he was known—attended Catholic schools his entire childhood. At age 13, he was shipped off to boarding school in New Jersey, where one of the priests encouraged his burgeoning talent for writing.

In 1913, Fitzgerald attended Princeton University, where he became a member of the University Cottage Club—one of the prestigious (if not bizarre) eating clubs at Princeton. At the school, Fitzgerald wrote for various campus publications and even managed to finish a novel. While rejected by Scribner, the publisher gave encouraging feedback to the young author. Despite this positive outlook, Fitzgerald's grades tanked, and he eventually dropped out altogether in 1917.

The Author as a Young Man 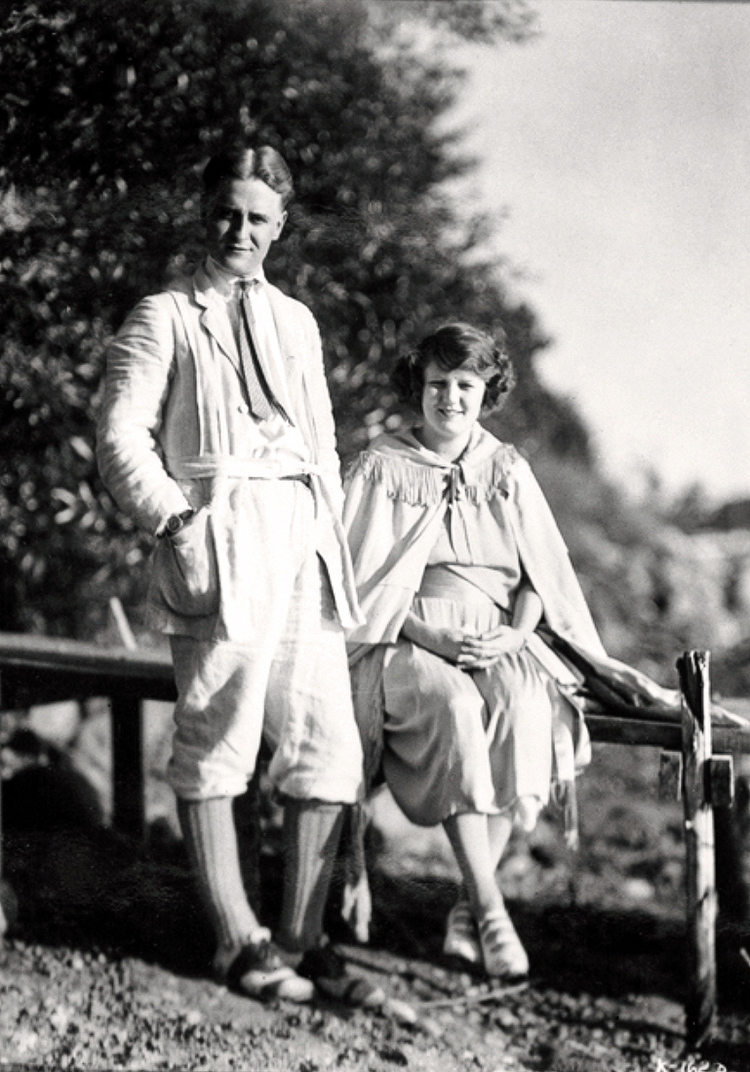 As a young man, Fitzgerald was a rather melancholy romantic—much like his most famous character, Gatsby. At Princeton, the budding author had been unlucky in love. His affections for the wealthy young Ginevra King inspired a long string of love letters which ultimately lead to heartbreak. When he left Princeton, Fitzgerald joined the army as World War I was still ongoing. At this time, he finished The Romantic Egotist, another novel that did not get accepted for publication. Although he was never shipped to Europe, Fitzgerald continued to write while in service stateside. Apparently, he had specially commissioned his own uniform from Brooks Brothers to fit his romantic ideal of a dashing young soldier.

While on duty at a camp near Montgomery, Alabama, Fitzgerald met the wealthy socialite Zelda Sayre. Enchanted by her, Fitzgerald attempted to make himself worthy of her. He moved to New York City after the end of the war where his attempts to find a job in journalism were deeply unsuccessful. His financial failures ended their short-lived engagement. 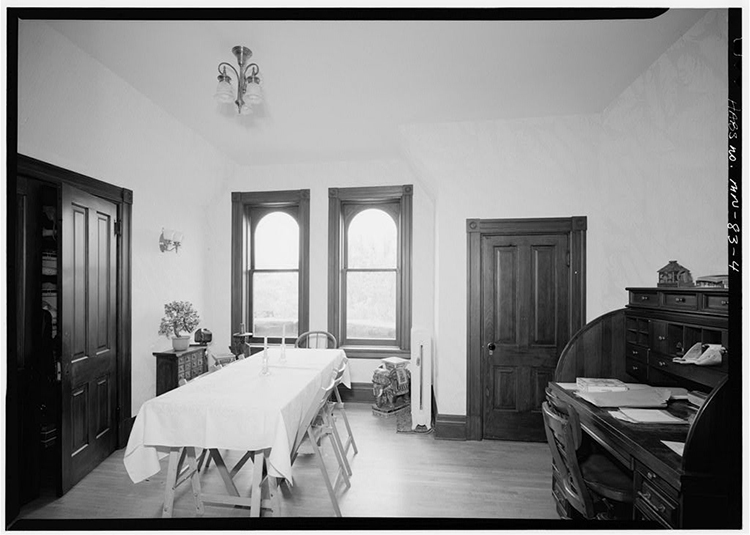 Fitzgerald returned to his family in Saint Paul and continued his quest to become a published novelist. He revised The Romantic Egotist and submitted it once more to publishers. This time, the work was accepted and the first printing was released in 1920 by Scribner. The retitled novel—This Side of Paradise—did commercially well. It also proved to Zelda that Fitzgerald could, in fact, be a financial success in his chosen field. The two were married that year in New York. 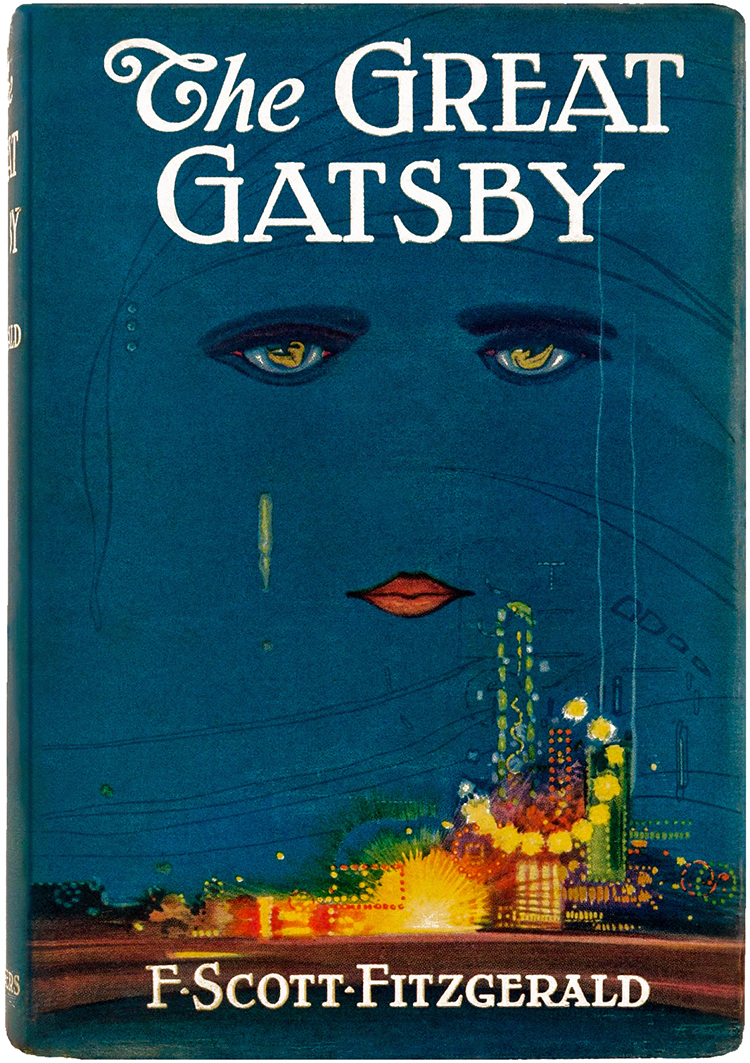 In the years after their marriage, the young couple became the symbol of 1920s New York. Much like the characters of Fitzgerald's novels, they were known for wild nights and copious amounts of alcohol. Fitzgerald's rising literary star was a perfect fit for the roaring twenties, which was full of bright young things.

According to the contemporary writer Dorothy Parker, “They did both look as though they had just stepped out of the sun; their youth was striking. Everyone wanted to meet him.” During their early years in New York, Fitzgerald actively worked on his next novel, The Beautiful and the Damned. He also published a collection of short stories titled Tales of the Jazz Age—a work which is thought to have coined the term for the era.

After taking the New York social scene by storm, the Fitzgeralds moved to Paris in 1924. The author began to work on the novel which would become The Great Gatsby while also selling short stories to magazines for short-term income. Published in 1925, the now-famous novel was met with only lukewarm enthusiasm. Daisy—the elusive socialite love interest of the hero Jay Gatsby—is thought to have been inspired by Fitzgerald's romances with the upper-class Ginevra and Zelda.

While abroad, the Fitzgerald's marital troubles (stemming in part from infidelity and alcohol) came to a head. Zelda's mental health issues were also likely beginning to manifest. Upon the couple's return to the United States in 1927, they briefly lived in Hollywood before settling in Delaware. Zelda was diagnosed with schizophrenia in 1930, and the next few years saw her in treatment and even hospitalized.

In 1934, Fitzgerald's novel Tender Is the Night was released. The world was different, however, from the roaring twenties. The Great Depression left little money for purchasing books and little humor for the reminiscences of New York's former golden boy. Feeling the financial crunch, Fitzgerald's drinking problem worsened, leading to medical and legal troubles. 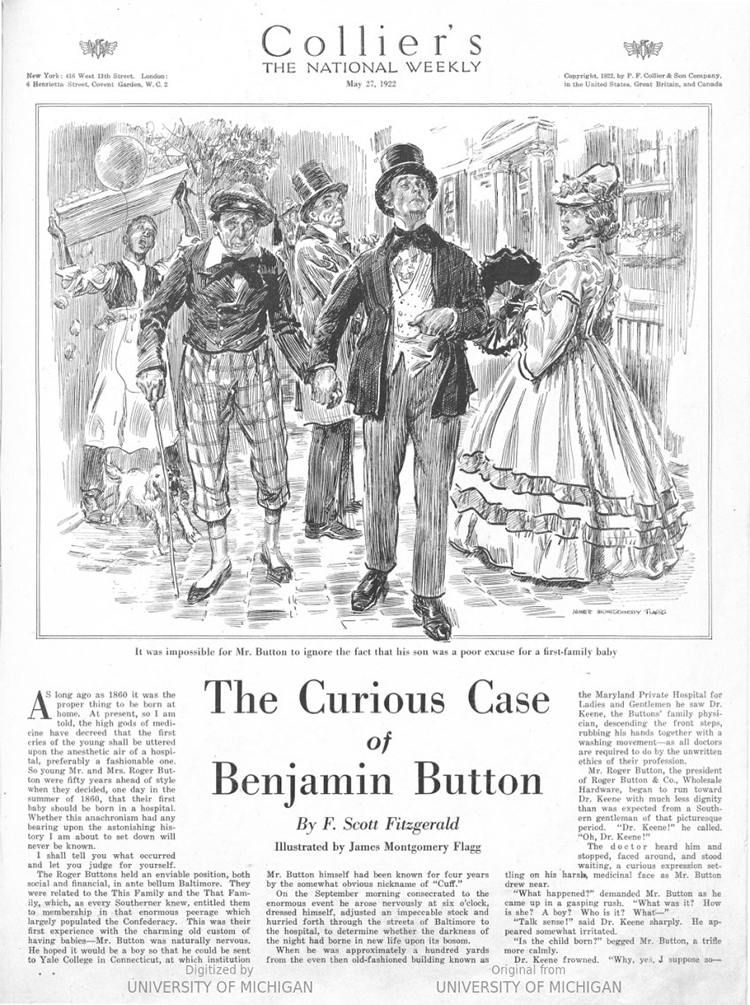 Fitzgerald's literary accomplishments numbered four complete novels, over 150 short stories, and other unfinished pieces. His attempts to write screenplays for Hollywood during the late 1930s have recently received scholarly attention; other unpublished stories have been discovered in the Princeton University Archives. Of his four novels, The Great Gatsby has become the most famous despite its lackluster initial release. During World War II, the book was specifically printed and distributed to the armed forces abroad. Fitzgerald's masterpiece became a touchstone for later writers such as J.D. Salinger and T.S. Eliot.

One of Fitzgerald's short stories saw a modern revival. “The Curious Case of Benjamin Button” was published in Collier's magazine in 1922; the 2008 adaptation into a film starring Brad Pitt brought the story to life once more.

Fitzgerald's other works have been modified for stage and screen many times. This includes The Last Tycoon, Fitzgerald's unfinished work which was completed after his death by his friend Edmund Wilson. The allure of Fitzgerald has captivated Hollywood since the 1950s, and the stars of each era relish the chance to enact his characters.

The Symbol of His Times 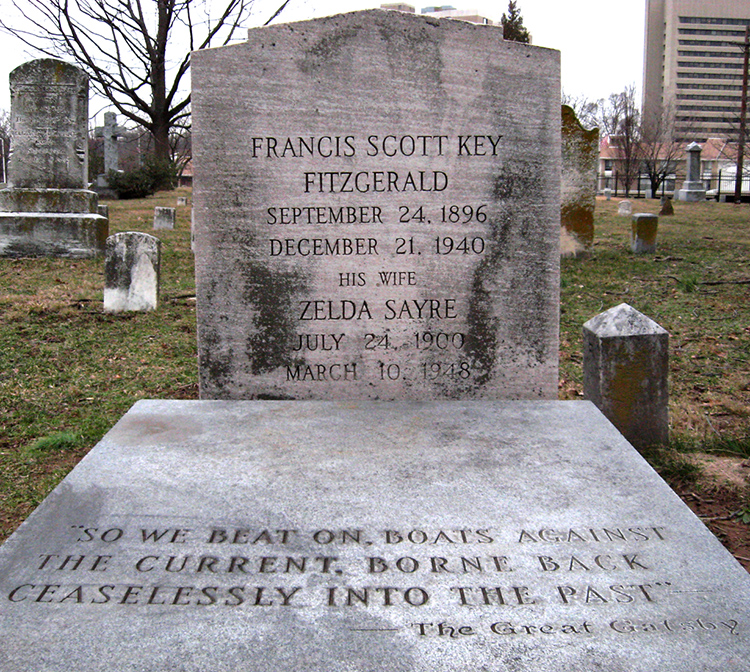 Fitzgerald passed away from a heart attack in December of 1940 at age 44. Plagued by alcoholism for much of his life, his writings often seem to reflect his own experience as a once-famous writer. In 2015, a long-lost story was discovered, entitled “Temperature.” The tale tells of a writer struggling to adapt to a new life in Hollywood as he self-destructs.

Perhaps not strictly autobiographical, the story nonetheless sheds light on the difficulties of the author's later life. Fitzgerald was part of the Lost Generation of World War I, young people whose worlds were upended by conflict and then economic devastation in 1929. As much as Fitzgerald's work came to define the hedonism of the roaring twenties, his characters became symbols of emotional turmoil and struggling to find meaning in American society.

In a review of The Last Tycoon, published in 1941 after Fitzgerald's death, J. Donald Adams wrote for The New York Times:

“From the beginning Scott Fitzgerald wrote about the things and the people that he knew. His early material was trivial, and like the youngsters of whom he wrote, he was himself rudderless, borne swiftly along on a stream that empties into nothingness. But from the outset his perceptions were keen, his feeling for words innate, his imagination quick and strong. There was vitality in every line he wrote. But he had to get his own values straight before he could properly do the work for which he was fitted, and the process took heavy toll of his vitality. Fitzgerald's career is a tragic story, but the end is better than it might have been. And I think he will be remembered in his generation.”

It is this balance of nothingness and vitality which gave works like The Great Gatsby their enduring quality. As the chronicler of an age which was briefly brilliant and then lost to the ravages of the Great Depression and war, Fitzgerald captured something about the American experience that has remained relevant so many years later.