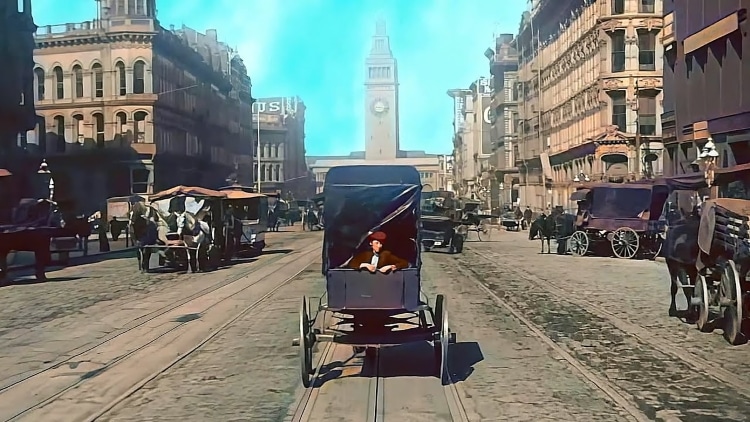 At 5:12 a.m. on April 18, 1906, just as San Francisco, California, was beginning to wake, an earthquake lasting less than a minute shook the city to its core. The tremors ignited fire after fire around the city, which burned for three days. The disaster killed an estimated 3,000 people and left half of the city’s 400,000 residents homeless as buildings toppled and burned.

Just four days earlier, on April 14, 1906, moving picture photographers the Miles Brothers shot footage of the city as it would never be seen again, capturing the transportation, fashions, and bustling atmosphere of San Francisco. Titled A Trip Down Market Street, the film is a point-of-view-style video shot from the front of a cable car. The 116-year-old footage takes viewers eastward down Market Street, beginning at 8th Street and heading towards the cable car turnaround at the Ferry Building.

Recently, video restorer NASS remastered the footage, and the result feels like a trip back in a time. Watching the enhanced footage feels like riding at the bow of the cable car, giving a front row seat to the rather chaotic traffic criss-crossing the street, hearing the clip-clop of horses’ hooves, and waving to enthusiastic children at the turnaround. The restoration process included boosting the original 15 FPS to 60, upgrading the image resolution to HD, and improving the sharpness and brightness of the picture. While the AI-generated colorization and added sound design are for ambiance and are not necessarily historically accurate, they still give viewers a sense of what it would have been like to ride a cable car down Market Street in 1906.

The original footage is stored at the Prelinger Archives in San Francisco. What you see online is a scan of 35mm material, shot by Harry J. Miles hand-cranking the Bell & Howell camera placed on the front of the streetcar. The negative was taken by train to the Miles’ New York office on April 17, 1907, when the brothers were en route to NY. When they heard the news of the earthquake, they sent the negative on ahead and returned to San Francisco, where they discovered their studios had been destroyed in the fires.

Scroll down to watch both the original and remastered footage, and subscribe to NASS’ YouTube channel for more remastered historic videos.

San Francisco had a massive earthquake in 1906 that destroyed much of the city. This footage was taken just days before.

Now, the footage has been remastered to give a realistic sense of the city before it shook to its core.

All images via NASS.