We've seen albino or leucistic whales, penguins, giraffes, and tigers, but have you ever stumbled upon an albino turtle? With their red eyes and orange-tinged skin and shell, they are an incredible sight to behold. For Super Mario Brothers fans they almost look like Koopa Paratroopas and are totally adorable. Unfortunately, their unique appearance, as with all albino animals, also leaves them incredibly vulnerable.

Without the camouflage that their normal coloration awards them, albino turtles are much more susceptible to predators. This makes their lifespan shorter and therefore contributes to the rarity of their kind. Despite this genetic disadvantage, turtles are lucky in the spectrum of albino animals. Due to the protection that their hard shell provides, they do typically live longer than other albino species—though their life is still shorter than a standard turtle.

For turtles, albinism is often a bit different than in humans or even birds. Reptiles usually still have one pigment present and that's why they appear red or yellow instead of white. More accurately, they should be called amelanistic because melanin is the pigment that they lack. Just as in albinism, the lack of pigment affects all areas of the body including the irises of the eye. This isn't to say that no turtles are white from albinism, it's just rarer. Of all turtle species, Sulcata turtles are most likely to be albino and even they will never be completely white.

Albino turtles are so rare, and so beautiful, that they tend to cause a stir online. Several years ago an albino pinkbelly sideneck turtle was born with her heart beating outside of her body. Appropriately named Hope, she became an online sensation and continues to thrive thanks to the care of her owner, who posts updates about her progress on Instagram.

Albino turtles are rare, but tend to survive longer than other albino animals due to their shell. 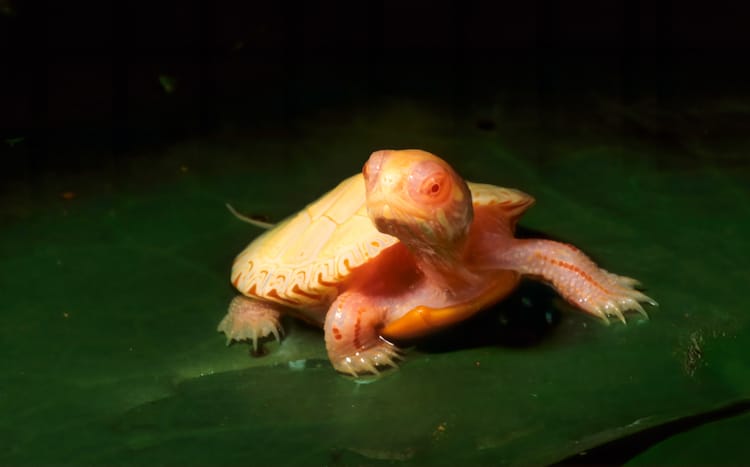 An albino turtle named Hope caused a sensation online when she was born due to her heart beating outside of her shell.

Today she continues to thrive thanks to the care of her loving owner.

Meanwhile this albino turtle has a stunning mix of colors that almost looks like tie-dye or… a pizza.