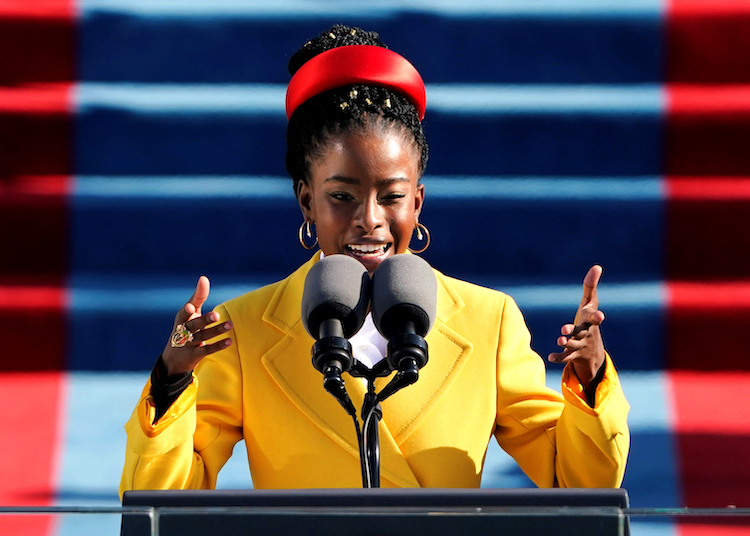 Photo: Stock Photos from mccv/Shutterstock
This post may contain affiliate links. If you make a purchase, My Modern Met may earn an affiliate commission. Please read our disclosure for more info.

If you tuned into the entire inauguration of President Joe Biden and Vice President Kamala Harris, you saw Amanda Gorman practically steal the show with her words. The 22-year-old poet and activist recited her poem The Hill We Climb, which she finished after insurrectionists attempted to overtake the Capitol on January 6.

The overall theme of The Hill We Climb is “America united”—it was the concept presented to Gorman by the inaugural committee when she was asked to speak at the event. But beyond that stipulation, she had creative control. Gorman said that she felt the need to acknowledge the dark time that Americans are living through while still finding light within it. To help her write, she researched the speeches of Abraham Lincoln and Dr. Martin Luther King, Jr., and she also listened to the musical Hamilton for inspiration.

“We have to confront these realities if we’re going to move forward, so that’s also an important touchstone of the poem,” she said. “There is space for grief and horror and hope and unity, and I also hope that there is a breath for joy in the poem, because I do think we have a lot to celebrate at this inauguration.”

Gorman is the youngest inaugural poet ever in the U.S., and she was more than ready to meet the moment, which she called “probably one of the most important things I’ll ever do in my career.” After falling in love with poetry at a young age, she wrote in journals while on the playground at school. Doing this allowed her to use her voice on the page and helped her overcome a speech impediment—something that she and President Biden share. At age 16, she became the Youth Poet Laureate of Los Angeles and published her first book of poems in 2015. Later on, she studied sociology at Harvard (graduating in 2020) and was named the first National Youth Poet Laureate.

Gorman will continue to reach more people in 2021. She is releasing a children’s book in September called Change Sings as well as a poetry collection also called The Hill We Climb. It will have the poem recited at the inauguration as well as other inspirational compositions. “My wish is for The Hill We Climb to inspire and uplift readers with its verse at a time when we could all use more poetry in our lives,” she said of the forthcoming publication, “no matter our age.”

Watch poet and activist Amanda Gorman recite her poem “The Hill We Climb” at the inauguration of President Joe Biden and Vice President Kamala Harris.

Gorman’s poem captured the moment we are living in; the dark times but the hope that still remains. Barack Obama, Oprah, and more were gushing over her words.

I have never been prouder to see another young woman rise! Brava Brava, @TheAmandaGorman! Maya Angelou is cheering—and so am I. pic.twitter.com/I5HLE0qbPs

Wasn't @TheAmandaGorman’s poem just stunning? She's promised to run for president in 2036 and I for one can't wait. pic.twitter.com/rahEClc6k2

There are more opportunities to enjoy Gorman's work. Her debut children's book called Change Sings comes out in September 2021.