By Madeleine Muzdakis on November 3, 2021 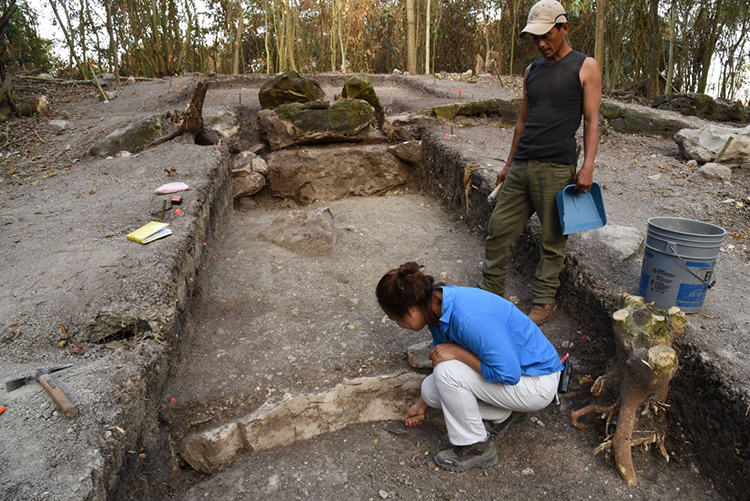 The dense jungles of Central America hide the remains of great ancient civilizations. Among these civilizations were the Olmec and Mayan peoples who built impressive pyramidal structures and engineered sophisticated water filtration systems. While some of these sites have been excavated, many others remain buried beneath lush greenery. A new study published in Nature Human Behavior announces the discovery of almost 500 previously unknown Olmec and Mayan sites—including ceremonial centers which are aligned with the Mayan calendar.

To peer beneath the jungle canopy, a team of anthropologists working under Takeshi Inomata from the University of Arizona used a very modern technology called LiDAR. LiDAR stands for light detection and ranging. This technique can pierce through vegetation to scan the fluctuations of the ground below. Mexico's National Institute of Statistics and Geography has published LIDAR scans over an 85,000-square-kilometer area (33,000 square miles). Inomata's team analyzed this data looking for the telltale signs of ancient structures. This technique has in the past led to the discovery of thousands of ruins.

The team discovered 478 unknown complexes in Southern Mexico, in a region known to anthropologists as the Olmec region and the western Maya lowlands. The structures dates from 1100 BCE to 400 BCE. The Olmec civilization peaked during what's known as the Formative period (2000 BCE–250 CE) of Central American history, while the Maya peaked in the Classic period (250–900 CE). However, the two civilizations overlapped for some time. “There has always been debate over whether Olmec civilization led to the development of the Maya civilization or if the Maya developed independently,” Inomata said. To what extent did the Olmec influence the rising Mayan culture?

The sites discovered by the team suggest that Olmec ceremonial architecture continued into the Mayan period. The design of a previously known Olmec city called San Lorenzo (dating 1400 BCE to 1150 BCE) can be seen replicated in the newly discovered structures. Particularly, this style can be seen in a 4,600-foot-long structure known as Aguada Fénix, a Mayan site from 1000 BCE to 800 BCE. “Now we show that San Lorenzo is very similar to Aguada Fénix—it has a rectangular plaza flanked by edge platforms. This tells us that San Lorenzo is very important for the beginning of some of these ideas that were later used by the Maya,” said Inomata in a statement.

Many of the structures identified by the LiDAR technology are oriented according to Mayan cosmology. Although the Mayan calendar was not yet written, it clearly already played a role in culture and ceremony at the time the buildings were constructed. Many of the buildings have large central spaces for ceremonial gatherings. These spaces align with the sunrise on specific days. May 10 in the region is the zenith passage day—when the path of the sun includes the point directly overhead. Some of the sites are aligned to the sunrise 40, 60, 80 or 100 days before May 10th. Multiples of 20 were later used by the Maya in the 260-day Tzolk'in religious calendar and the famous Long Count Calendar which predicted the world would end in 2012.

The importance of the number 20 also appears in the architecture of buildings such as San Lorenzo and Aguada Fénix. They both feature 20 edge platforms along the side. “This means that they were representing cosmological ideas through these ceremonial spaces,” Inomata says. “In this space, people gathered according to this ceremonial calendar.”

Despite these tantalizing references to cosmology and calendars, much still remains to be discovered. Hundreds of the sites remain unexcavated. The mysteries of the ancients will continue to emerge with further research. 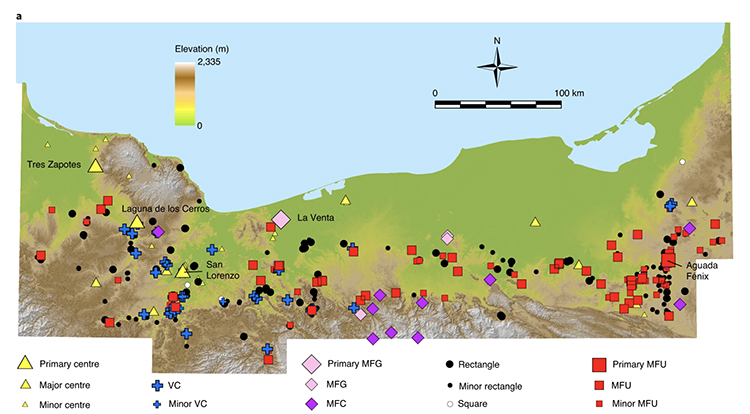 The locations of standardized complexes in the study area, identified in the INEGI lidar. (Photo: Fig. 2/Inomata et al.)

The sites were built by the Olmec and Maya, two ancient civilizations of Central America. 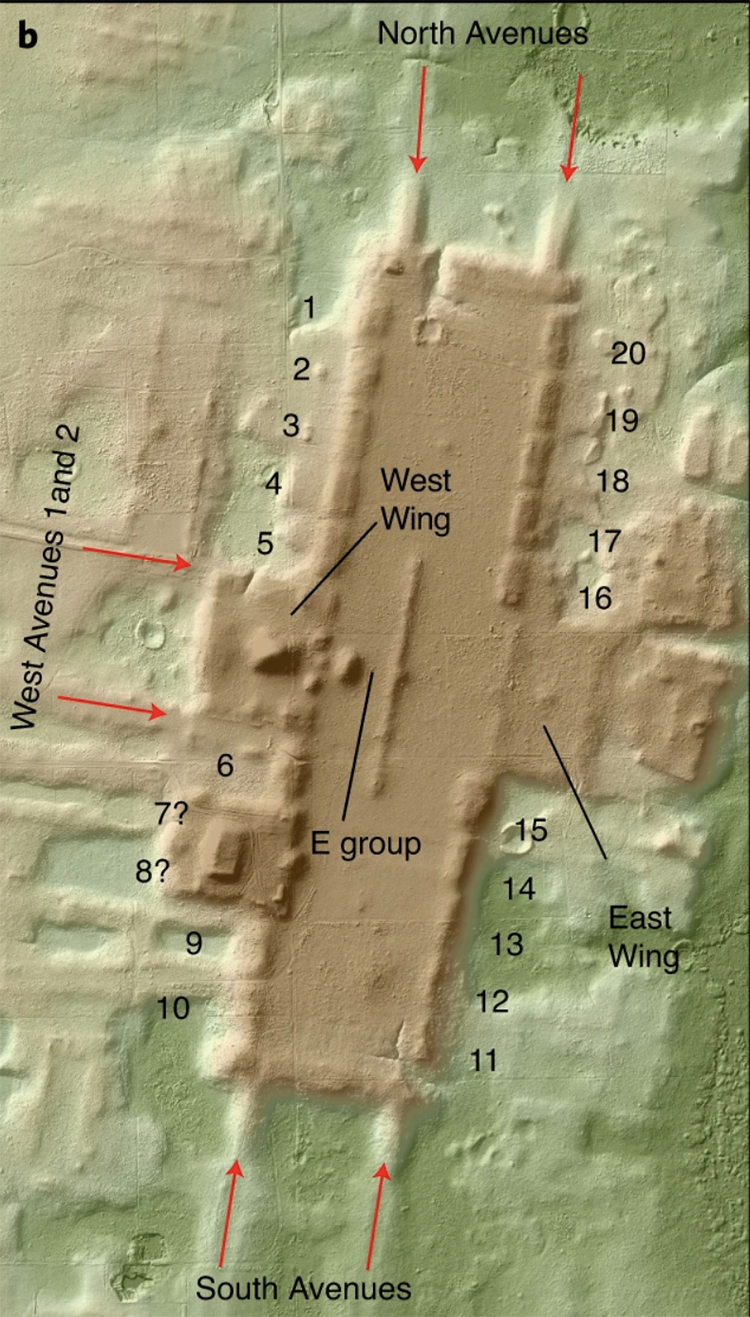 Some of the buildings are designed around the number 20, indicating a connection to the famous Mayan calendars. 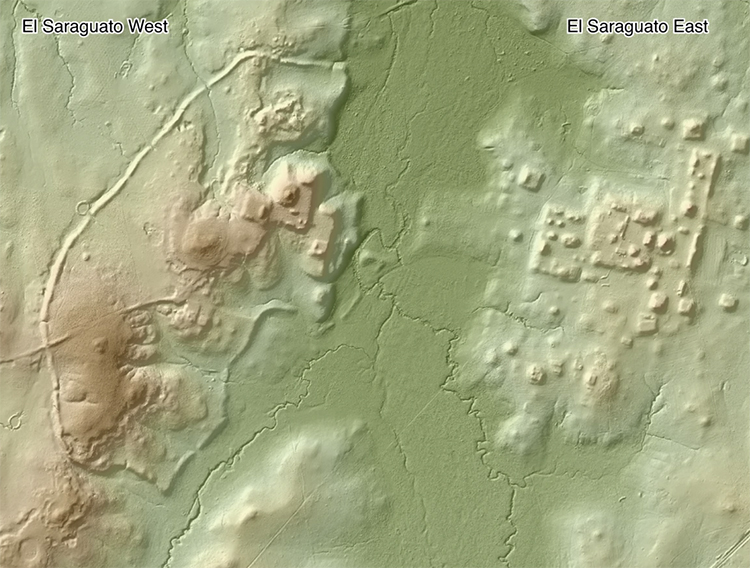