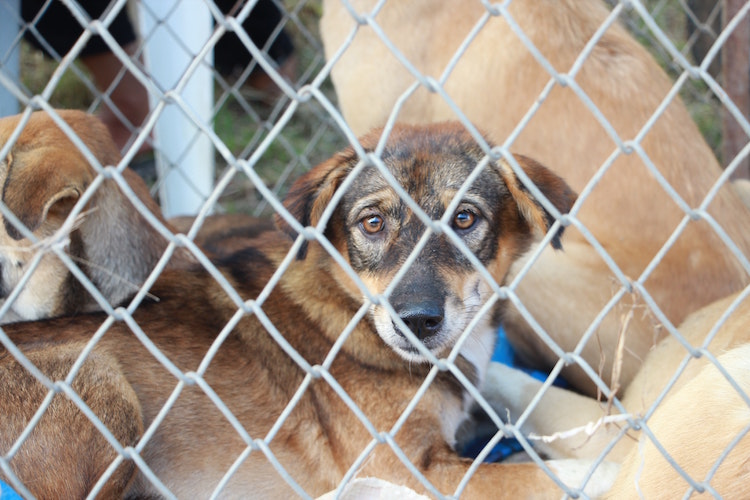 For several days, residents of North Carolina have been confronted with devastating destruction caused by Hurricane Florence. The powerful tropical storm has caused entire cities to flood, forcing more than 1 million people to evacuate their homes. However, it’s not just people who’re in need of help—the statewide crisis has also left hundreds of homeless animals in need of urgent care.

Before the storm hit, local animal rescue shelters began asking residents for assistance in providing shelter for the pets in their care. Animal lovers soon began lining up to adopt the pets in need, demonstrating their heartwarming compassion for our four-legged friends. North Carolina resident Ali Standish recently shared a now-viral photo on Twitter, showing a long line of people willing to adopt dogs at Saving Grace, an animal rescue center. “The line of folks waiting to pick up foster dogs for the weekend so coastal shelters can evacuate here before #HurricanceFlorence [sic],” she tweeted. “Many more behind me. Sometimes humans are okay.”

Fellow animal lovers quickly began retweeting the image, encouraging others to help if they can. All 124 dogs were rescued—100 of which were from Saving Grace and two dozen from other neighboring shelters. However, this isn’t the only success story—many more shelters took part in the animal rescue mission. In Florence, South Carolina, Lucky Dog Animal Rescue rescued 55 dogs and 22 cats and transported them north to Washington, D.C., where they were placed with local foster families.

With the storm advancing inland, the affected residents of North Carolina continue to need your support. Find out how you can help here.

For several days, residents of North Carolina have been confronted with devastating destruction caused by Hurricane Florence.

Before the storm hit, local animal shelters began asking residents for assistance in providing shelter for the pets in their care.

The line of folks waiting to pick up foster dogs for the weekend so coastal shelters can evacuate here before #HurricanceFlorence. Many more behind me. Sometimes humans are okay. ❤ pic.twitter.com/niyCRDygOV

Update: We will be spending #HurricaneFlorence hanging out with Hurricane Floyd! (We hope he won't be a hurricane, but we have to prepare ourselves for an extreme puppy event…) pic.twitter.com/EPSj2rFz4o

Kesha and her sister are happy to be hanging out with us for the storm. Sweetest beagle girls ever with great house manners. Check them out on https://t.co/ocrfjKNAay pic.twitter.com/JG0zeV8LKw

Puppy sitting this Angel so his mom and dad can be on the front lines to restore power to East Coast. One good thing about hurricanes…people (for the most part) show their best sides. Thanks to all these people in line. pic.twitter.com/EwwXoEQjwX

Grateful to those who opened their home to Saving Grace dogs! Some evacuated from shelters, some with us prior to the storm, all in need. A quiet day today to deep clean and prepare for displaced dogs. A small shelter but  huge presence making a difference in many lives. pic.twitter.com/TWWqWOUbcb

Twenty-six cats and dogs arrived at Humane Rescue Alliance on Tuesday in Washington, D.C., from Norfolk Animal Care and Control of Norfolk, Virginia, in advance of Hurricane Florence. The evacuated animals will all be available for adoption. https://t.co/pSvkyPPl6d pic.twitter.com/4tnbBuL1ZX

OMG Bravo to all who lined up to help all these shelter animals!! Faith in humanity restored. 👏👏👏👏👏👏👏👏👏So generous & amazing of everyone to open their home to animals in need. #HurricaneFlorence #Rescue #Shelter #HumanityRestored https://t.co/feQRak1hLr