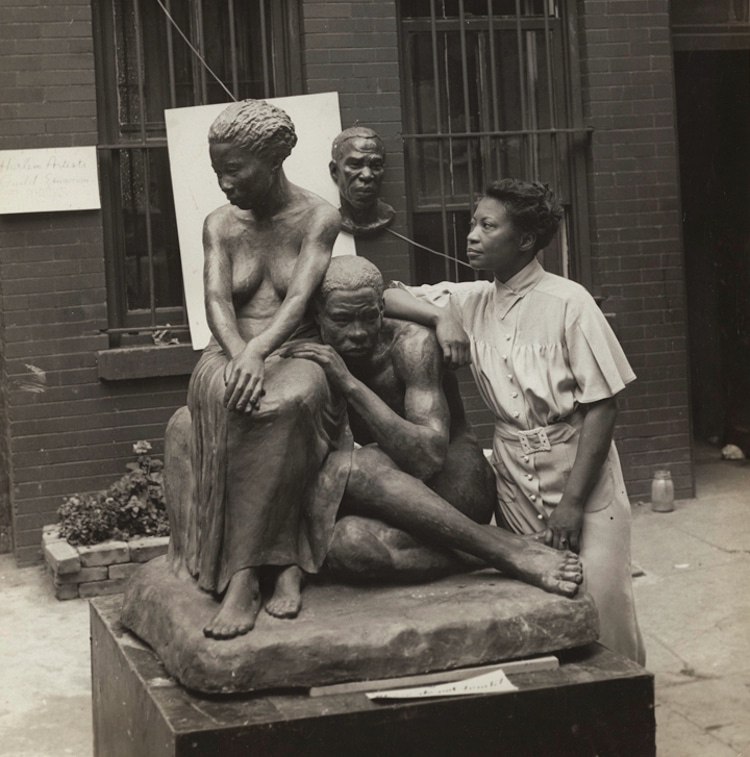 In the early 20th century, a remarkable renaissance emerged in Harlem. On the historic heels of the Great Migration, a mass exodus of over six million African Americans fleeing the segregated South, the New York City neighborhood became a cultural hub for Black creatives. While a wealth of figures formed this “golden age” of art, music, and literature, the contributions of sculptor Augusta Savage can be found at its core.

As a teacher and advocate for African Americans in the arts, Savage shaped the careers of some of the Harlem Renaissance‘s most prominent artists. While she was a skilled ceramicist her in own right, Savage considered the impression she left on her students to be her true masterpiece. “I have created nothing really beautiful, really lasting, but if I can inspire one of these youngsters to develop the talent I know they possess, then my monument will be in their work,” she said.

Although this “monument” is at the heart of the Harlem Renaissance, many people are unaware of Savage's role in the groundbreaking movement. Here, we take a look at her life and work, from her humble beginnings in clay to her mold-breaking legacy. 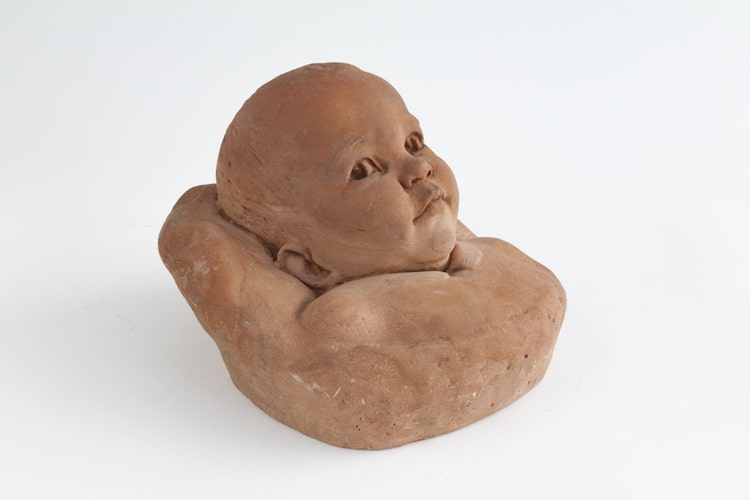 In 1892, Augusta Savage was born in Green Cove Springs, a lush city in Florida named—and known—for its natural landscape. Built around a warm mineral spring, the city is rich in red clay. With this medium conveniently at her disposal, Savage spent her childhood crafting small ceramic animals. While her Methodist minister father disapproved of her hobby, a teenaged Savage taught sculpting in high school—a stint that shaped the foundation for a career in arts education.

In 1919, Savage solidified her role as an innovative sculptor when her work won an award for originality at a Florida fair. Two years later, she moved to New York City, where she applied to the Cooper Union for the Advancement of Science and Art, a progressive, scholarship-based university in Manhattan. Though up against 142 male applicants, Savage was accepted, and, in 1923, she earned her degree—an entire year early.

While Savage was rightly recognized for her talents at Cooper Union, her early career experiences were not without racism and sexism. In 1923, a committee rejected her application for a summer art program in France due to her race. Savage contested the decision to no avail. However, committee member and sculptor Hermon Atkins MacNeil championed Savage's work, eventually becoming her teacher.

That same year, Savage received her first big commission: a bust of civil rights activist and writer W. E. B. Du Bois for the Harlem Library. Though struggling financially, over the next few years, she was granted scholarships, won prizes, became an outspoken advocate against “negro primitive” art, and (thanks to donations) studied in Paris—all before making Harlem Renaissance history.

In 1929, Savage created Gamin, a bust depicting a young African American boy, modeled after the artist’s own “little nephew.” He had come to live with Savage after his home in Florida was damaged by a hurricane. At the Schomburg Center for Research in Black Culture, curator Jeffreen M. Hayes found the following quotation from Savage in a 1935 interview with the Federal Art Commission: “I bought some materials, set a dry goods box on the living room table, stood my nephew alongside the table, and worked practically all night, till we were both exhausted.”

Made from plaster and covered in gold paint, Savage depicted the boy wearing a wrinkled shirt and a bebop cap. He has a somber look on his face, suggesting his awareness of his hardship and poverty, even though he’s still a child. Gamin marked a turning point in Savage's career as it was met with acclaim. In May 1929, the sculpture helped Savage win the first Rosenwald Fund fellowship ever awarded to a visual artist. And the president of the Rosenwald Fund, Edwin Embree, even ordered a cast of Gamin for himself. 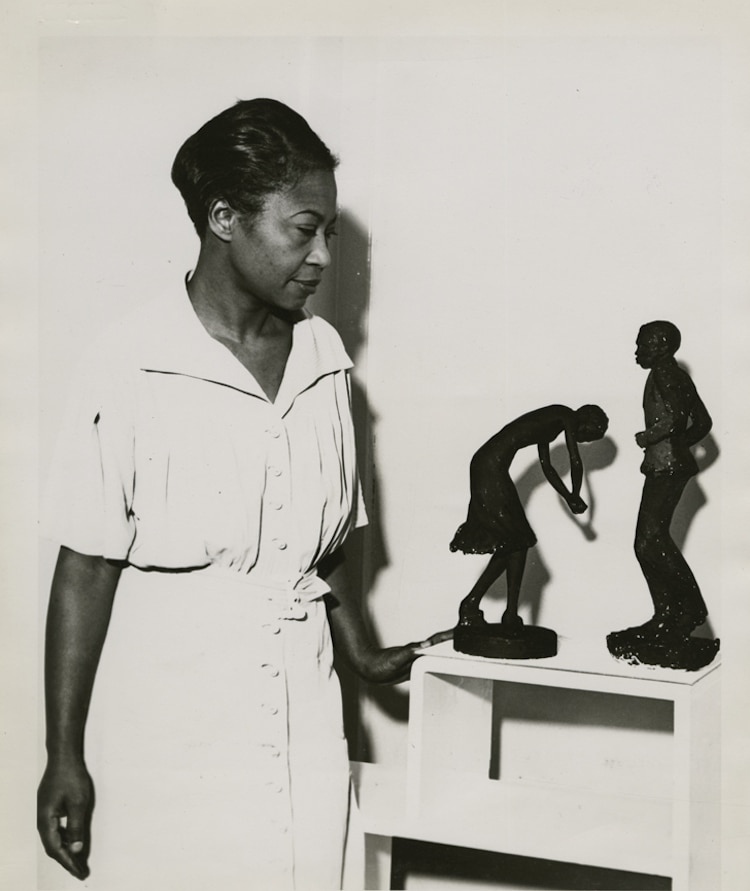 When Savage returned from France in 1931, the Harlem Renaissance was in full swing. “Harlem became a destination for African Americans of all backgrounds,” the National Museum of African American History and Culture explains. “From unskilled laborers to an educated middle-class, they shared common experiences of slavery, emancipation, and racial oppression, as well as a determination to forge a new identity as free people.” To do their part in the pursuit of this goal, Black artists from all over the country flocked to Harlem—including none other than Augusta Savage.

In 1934, the sculptor opened the Savage Studio of Arts and Crafts. Set in a Harlem basement, this school offered painting, drawing, and sculpting classes to budding Black artists (African American painter Jacob Lawrence was one of many pupils who would later see success). The Savage Studio of Arts and Crafts later became the Harlem Community Art Center. Key to the Harlem Renaissance's artistic advancements, this multi-cultural establishment (funded through the Federal Art Project) would foster the development of 1,500 students.

In addition to teaching, Savage was dedicated to advocacy. In the studio's second year, she co-founded the Harlem Artists Guild with multidisciplinary artist Charles Alston and muralist Elba Lightfoot. Aiming to address the “cultural, economic, social, and professional problems” facing African American artists, the guild laid out three main goals in its constitution: to encourage young talent, to foster a relationship between artists and the public, and to improve artists’ standards of living and opportunities.

As the Harlem Renaissance dwindled (a race riot in 1935 and the Great Depression brought the “golden age” to an end), so did many of its neighborhood-based projects. The guild dissolved in 1941, and the Harlem Community Art Center closed the following year. 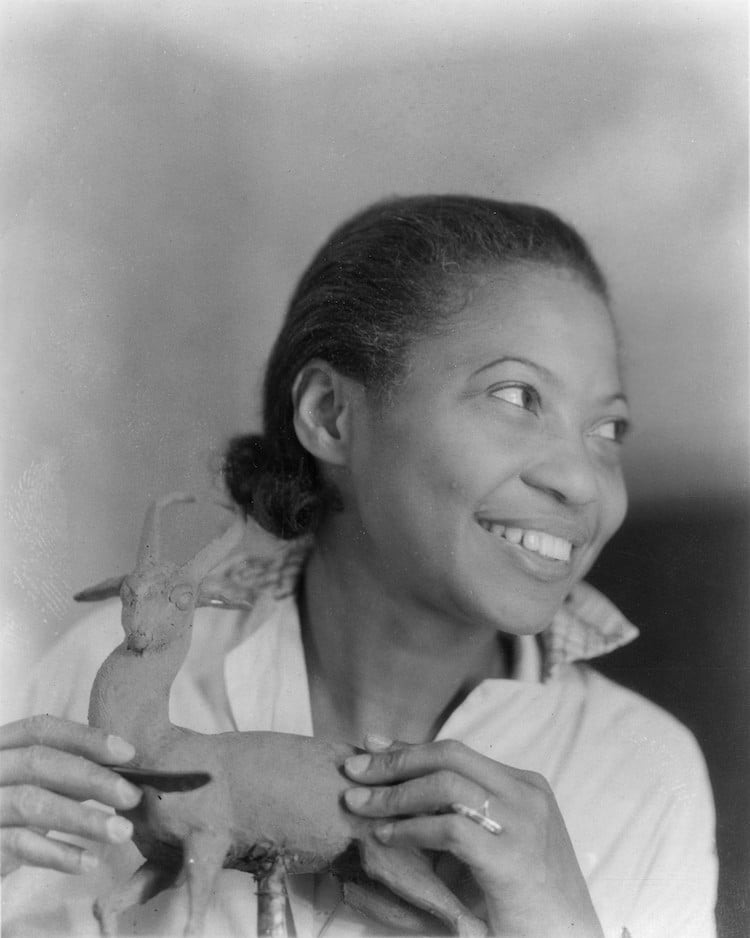 In 1939, Savage was selected to create a sculpture for the Board of Design of the 1939 New York World's Fair. Her piece, The Harp (originally titled “Lift Every Voice and Sing”), was among the exposition's most popular works. Comprising 12 Black singers (the “strings”) standing on the hand of God (the “sounding board”), the 16-foot sculpture was celebrated for its symbolic composition. Unfortunately, financial troubles did not allow Savage to explore its full potential. “No funds were available to cast The Harp, nor were there any facilities to store it,” the Smithsonian American Art Museum explains. “After the fair closed it was demolished as was all the art.”

Issues with funding would continue to hinder Savage's post-Renaissance artistic plans. In 1945, she left both the city and its art scene to settle in Saugerties, a small town in New York. Here, she shifted her focus from sculpting to writing, culminating in a collection of unpublished children’s stories and murder mysteries. Savage lived in Saugerties until she died in 1962.

At the time of her death, Savage's contributions to the Harlem Renaissance and to modernism as a whole were largely forgotten. But now, at a crucial point in history, Savage is finally starting to receive the recognition she deserves.

“We are in a moment where the canon is being challenged and expanded because of how history overlooks women and artists of color,” Jeffreen Hayes, the curator of the 2019 exhibition Augusta Savage: Renaissance Woman, said. “For many of us in the art world who have spent our careers researching, writing, and curating exhibitions about women and artists of color, these artists have always had a place in art, regardless of their social or racial identity. When thinking about Savage, her place has always been an artist who was a brilliant sculptor who used her art to forge a path for staying true to one's artistic passion.”

Exploring both Savage's self-described “monument” and her own striking sculptures, this exhibition revealed the artist for what she is: “one of America’s most influential 20th-century artists.”