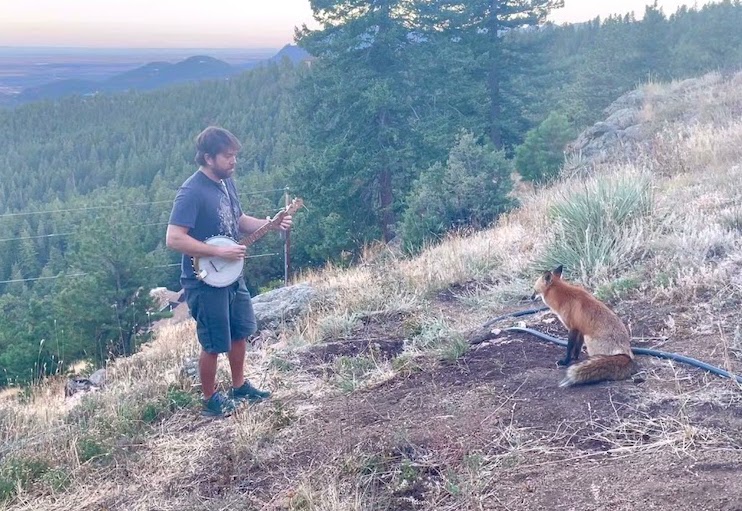 Banjo picker Andy Thorn—a talented musician from Boulder, Colorado—is best known for his work with jamgrass band, Leftover Salmon. However, lately he has been gaining plenty of recognition as the musical Doctor Dolittle. Thorn uploaded a video to YouTube where he stood in front of a scenic mountain setting at his home in Colorado, practicing his banjo. As he plucked away, he had an interesting encounter with a red fox.

The wild fox seemed to enjoy the banjo chords so much that it had come over to listen to him play. The animal attentively sat and listened to Thorn perform, occasionally getting up to wander around for a bit, but never strayed too far from the show. When Thorn stopped playing, the fox came over as if asking for an encore performance.

The music-loving fox isn’t new to this banjo hangout spot either. It had previously visited Thorn many times before, even once while Thorn was playing his beautiful 12-string guitar. The fox has provided him with a very special musical friendship and a great deal of inspiration, so much so that Thorn and his wife wrote songs inspired by the fox’s daily visits during lockdown. It was a way for the couple to address the changes going on in the world around them, resulting in Thorn’s fourth solo album “Fox Songs and Other Tales from the Pandemic.”

Watch the video of the big show where the fox and his friend, Andy Thorn, share a musical moment together: