Amazon CEO Jeff Bezos has announced his plans to go to the moon in a news conference for his space company Blue Origin. Until now Bezos had been relatively quiet about what Blue Origin was developing, but that has all changed with the unveiling of the Blue Moon Lander. Designed to carry payloads to the lunar surface, the lander was the star of the show as Bezos explained his company's plans.

Currently, Elon Musk's Space X is the more buzzed-about private space company, but that could change now that Blue Origin is making its intentions public. For two decades the company has been quietly working, and now they're ready to take the fruits of their labor public. The first big reveal is a lander that can carry 6.5 tons to the surface of the moon. Designed to be flexible, it can deliver a wide variety of loads and make soft landings that will help ensure a long-term human presence on the moon.

Bezos stated that Blue Origin had been working on the Blue Moon Lander for three years and that they could test fire the engine this summer. Bringing his analytical business savvy to outer space, Bezos has recognized that if we plan on bringing humans to live on the moon for longer periods, there will be a huge need for supplies. The Blue Moon Lander will effectively fill that gap, transporting precious materials back and forth. 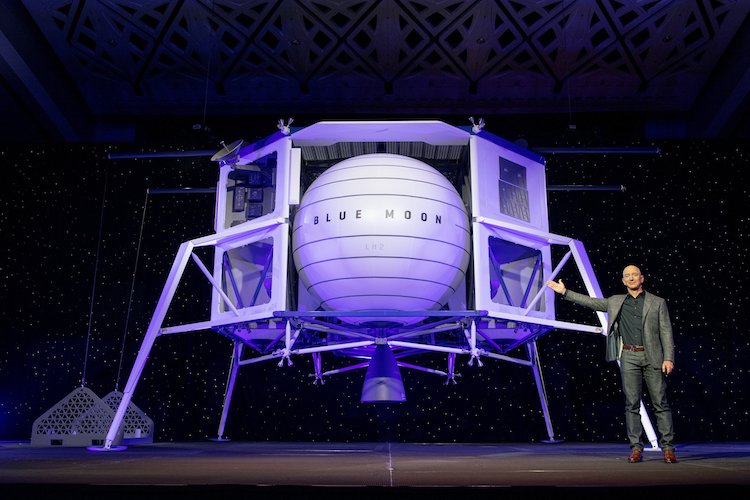 “It's time to go back to the moon, this time to stay,” Bezos said.

The Blue Moon Lander isn't the only innovation that Blue Origin has cooking. From the start, the company has keyed in on reusability as the main way to bring down costs. Its New Glenn rocket is designed to ferry people and payloads to Earth's orbit and beyond. Designed for a minimum of 25 flights, it should launch for the first time in 2021.

Watch as Jeff Bezos explains how Blue Origin is going to help us revolutionize space travel.

All images via Blue Origin.