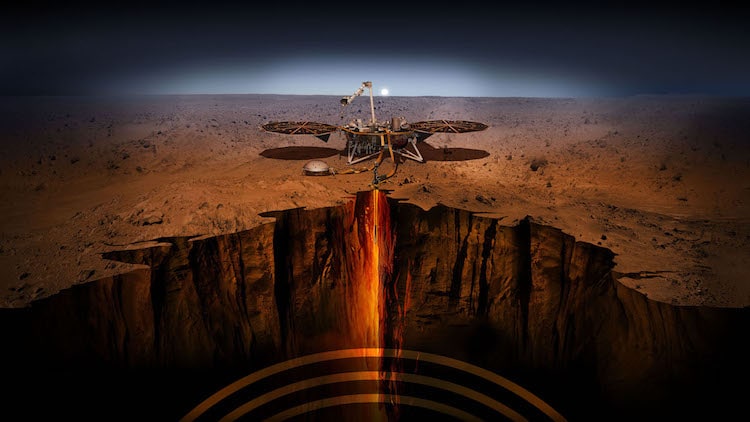 Seven months after leaving Earth, NASA's InSight lander has touched down on Mars. This is just the eighth successful landing on the Red Planet for NASA and is a breakthrough moment as humanity moves closer and closer to interplanetary living.

InSight traveled 300 million miles to Mars, landing on November 26 near the planet's equator on an expanse of smooth lava known as the Elysium Planitia. The lander will spend two years on the Red Planet, studying its deep interior in order to better understand how celestial bodies with rocky surfaces formed. This research will lay the groundwork for future human missions to the Moon and Mars.

“This accomplishment represents the ingenuity of America and our international partners and it serves as a testament to the dedication and perseverance of our team,” said NASA Administrator Jim Bridenstine. “The best of NASA is yet to come, and it is coming soon.”

InSight didn't make the voyage alone. Assisting it were two experimental Mars Cube One (MarCO) CubeSats. These miniaturized satellites left on the same rocket as the lander and followed it to Mars. It was one of these cubes that set off the signal indicating to NASA's Jet Propulsion Lab (JPL) that InSight had successfully landed. As the first CubeSats sent into space, their success in carrying out in-flight navigation and communication tasks is revolutionary.

“That's one giant leap for our intrepid, briefcase-sized robotic explorers,” said Joel Krajewski, MarCOproject manager at JPL. “I think CubeSats have a big future beyond Earth's orbit, and the MarCO team is happy to trailblaze the way.”

After entering Mars' atmosphere at 12,300 mph, InSight performed a complicated sequence of operations to touch down in just six and a half minutes. Once landed, InSight deployed two solar panels, which will continue to provide it with power. NASA received confirmation of successful deployment via the Mars Odyssey orbiter as well as a photo of the lander with its solar panels in place.

Now that the InSight lander is set up, it can begin drilling and conducting the important research that NASA officials have been waiting for. “Every Mars landing is daunting, but now with InSight safely on the surface we get to do a unique kind of science on Mars,” said JPL director Michael Watkins. “The experimental MarCO CubeSats have also opened a new door to smaller planetary spacecraft. The success of these two unique missions is a tribute to the hundreds of talented engineers and scientists who put their genius and labor into making this a great day.”

NASA is celebrating the successful touchdown of the Insight lander on Mars, where it will spend two years researching the interior of the Red Planet.

What was your reaction to today’s #MarsLanding? 🚀
STEP 1: Reply with a GIF or photo of your reaction
STEP 2: See how others reacted by taking a look at this @Twitter moment: https://t.co/39T6BFwgNj pic.twitter.com/6YULrFsiEs

Not long after landing, InSight took its first picture.

My first picture on #Mars! My lens cover isn’t off yet, but I just had to show you a first look at my new home. More status updates:https://t.co/tYcLE3tkkS #MarsLanding pic.twitter.com/G15bJjMYxa

Shortly after that, InSight completed the critical task of deploying two solar panels to provide it with power and we were given a clear photo of its point of view on Mars.

Our Mars Odyssey orbiter phoned home, relaying news from @NASAInSight indicating its solar panels are open & collecting sunlight on the Martian surface. Also in the dispatch: this snapshot from the lander's arm showing the instruments in their new home: https://t.co/WygR5X2Px4 pic.twitter.com/UwzBsu8BNe

Watch the thrilling moment as NASA's Jet Propulsion Lab in California waits for confirmation of the InSight landing.

NASA Releases Inspirational Look at Its Achievements for 60th Anniversary