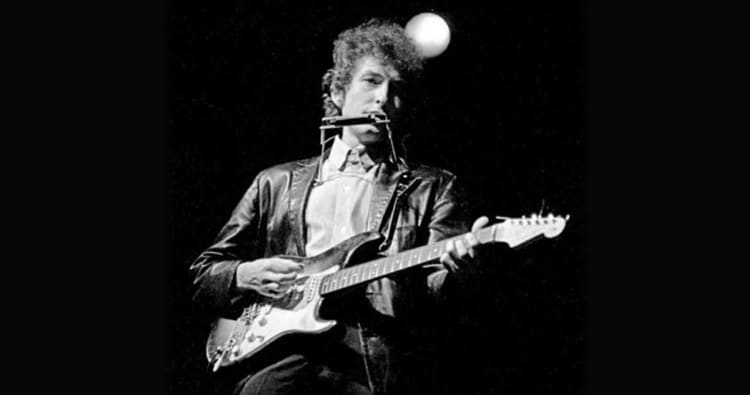 There is something truly magical about music festivals. Regular rules don’t seem to apply, and the distance between creatives and consumers is incredibly thin. It’s why festivals like Woodstock, Bonnaroo, and Altamont all have popular documentaries peeling back their layers. The same can be said for Newport Folk Festival and the fateful night of July 25, 1965, when Counter Culture icon Bob Dylan was set to perform. With four albums under his belt and a troubadour wisdom gained from years on the road, he was no stranger to the art of performing. Yet, the events of that night would go down in history forever.

Bob Dylan was born on May 24, 1941 as Robert Zimmerman in Hibbing, Minnesota (which is close to the Canadian border). Dylan was always transfixed by the power of music, and had taught himself to play guitar by the time he was 10. His restless spirit had also appeared, and over the course of his childhood, he ran away seven separate times, traveling around the Midwest and growing more and more confident as a musician.

He settled in New York City in 1961, and performed in clubs around Greenwich Village. It was there that the artist met record producer John Hammond, and began work on his debut album, Bob Dylan, which was released the next year. His politically charged lyrics took the growing counterculture by storm, and social activists began adopting his songs as anthems for their causes. He was the figurehead for a generation, but all he wanted to be was a singer of songs.

By 1965, the curly-haired musician already had four successful albums and multiple chart-topping hits. He was raking in royalties from songs he had written and popularized by acts like Peter, Paul, and Mary and the Kingston Trio. He had performed at the Newport Folk Festival before, and was prepared to do the 12-minute set that had been allotted to all performers.

On the evening of July 25, 1965, Bob Dylan stepped onto the stage with a Fender Stratocaster guitar in hand, plugging it into the sound system and shredded one of the loudest sets performed thus far at the folk festival. The mics had been turned down because of the band's volume, so the crowd’s precise words could not be registered, but it is said to have been a cacophony of jubilant cheers and enraged booing. Dylan did what Dylan does best—caused up a stir.

The night Dylan performed with an electric guitar at the Newport Folk Festival became notorious. Folk purists were outraged by the introduction of the electric sound in their musical venue, and political activists were concerned that their everyman spokesperson was “selling out”—what would this mean for their politically charged anthems? Others praised Dylan’s evolution and enjoyed his heavy influences as they reflected the harder rock ‘n’ roll that was to come. Many thought it was Dylan’s way of making a statement against (or for, depending on the person) society and the music industry. Perhaps it was, in some way. Just a year prior, the singer said in an interview with The New Yorker, “I don’t want to write for people anymore…From now on, I want to write from inside me.”

Bob Dylan created and rehearsed his electric set merely 24 hours before the performance. According to author Elijah Wald, the musician and a few sessions artists from his previous album met and did one rehearsal of the performance the night before. Wald attributes the angry sentiments that came pouring after Dylan’s performance to timing: “That was the weekend that Lyndon Johnson fully committed the United States to victory in Vietnam…The communal feeling of the first half of the ‘60s was getting harder and harder to feel like it as all going to work and the world was going to be a better place.” This momentous performance serves to mark a mid-decade divide between the first and second half of the sixties, from the flower power era to the more radical events that were to come. Yet, for those with their ears turned toward the sound, it’s also just an incredible performance by a powerful artist.